e have seen some pretty flashy preview cards over the last two columns. Cards like Vendilion Clique and Countryside Crusher are popular and powerful Limited and Constructed cards. In today's column, we will take a look at some Limited all-stars from formats past.

Let's start with a Commander staple, and a pretty darn good card in general, Kodama's Reach: Kodama's Reach is a powerful mana-ramp and color-fixing spell for a reasonable cost. At just three mana, it allows you to cast a five-mana spell on turn four. It virtually ensures that this will happen by not only putting a land onto the battlefield tapped, but also one in your hand so you don't miss your next land drop. In a bomb-heavy, multicolored deck, Kodama's Reach can be a real game-changer.

Some people like to play five-color decks in Draft. Kodama's Reach can enable those decks to function, assuming they are base-green. As long as you aren't under extreme pressure, a turn-three Kodama's Reach can set up some pretty devastating turns.

So what is a mage to do with all this multicolored mana? 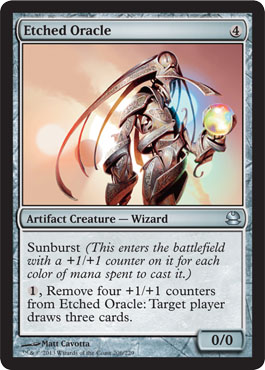 Predating the champion, Etched Oracle is a value proposition that is hard to pass up. It has sunburst, so if you can pay its mana cost with four different colors, you get a 4/4 for four mana. Pretty good deal considering it's a colorless spell.

If a 4/4 for four isn't what you had in mind, worry not. If you manage to get all four counters on this guy, you can pay one mana to remove four of them (usually killing it), for the chance to draw three cards.

Drawing three cards in a game of Magic is a great feeling. Sometimes you just want the 4/4 creature, but often you will prefer to refill your hand after a block or something. One can certainly cast this card for fewer than four colors, but it gets significantly less exciting.

With all this ramping and card draw, what is one to do with all that mana? Casting eight-drops seems like a reasonable option: 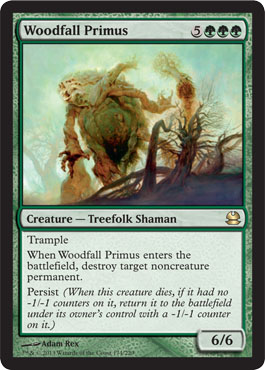 This guy is really tough to deal with. He often takes down a key artifact or land when he enters the battlefield. As if that weren't enough, he is a 6/6 with trample who is quite hard to kill in combat. Then, if you finally do kill it, it comes back again, blowing up another land or Planeswalker or enchantment or whatever, and now you are facing down a 5/5 with trample.

Resolving eight-drops is a rough business, though. Not only do you need to have some ramp spells, but you also can't afford to miss land drops. Or not have removal when it's needed. That's were cards like the following one help out a lot: 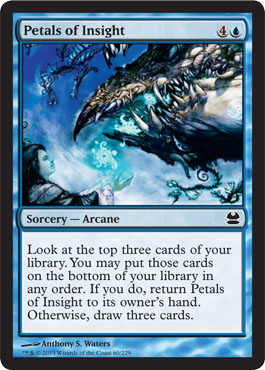 Petals of Insight is expensive, but it ensures you will find what you are looking for, eventually. Once the board is stable, you can just keep casting this until you find what you need. Alternatively, you can just cast it once and draw three cards. Both options are valid.

A stable board state is necessary to cast cards like Petals of Insight. It doesn't affect the board the turn you cast it and if you are under heavy assault, it can simply be too slow. This is a late-game spell designed to be cast after the dust has settled on the battlefield. It can also be used to dig for key combo pieces.

You may have noticed that both Petals of Insight and Kodama's Reach are Arcane spells. I'm not going to cover anything further here regarding that fact, but I wanted to point it out for any fans of such mechanics.

So we have Petals of Insight to draw us cards, great. While Petals is pretty cool, I can think of a much more popular way to spend five mana to get essentially three cards. 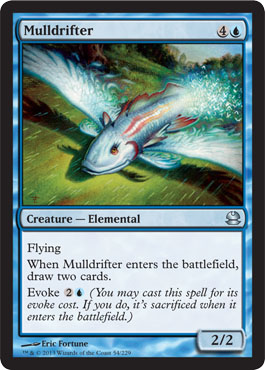 I know it says you only draw two cards when you cast it, but a 2/2 with flying is worth a card itself. I know many of my readers have fond memories of Mulldrifter in Limited. There is something so powerful about being able to just play it as a Divination if needed, but keeping the option of making a 2/2 flying Divination. Flexibility on this level is hard to come across, and Mulldrifter makes full use of it on both sides.

For those of you who haven't had the intense pleasure of resolving a Mulldrifter for its full mana cost: you are in for a treat. Think of it this way: would you like to play Wind Drake, but for two colorless mana extra, draw two cards? Yet it's still just Divination when you need it to be Divination.

The card is amazing, and many will rejoice to get a chance to cast it again.

Our next card has brought significantly less joy to the world than Mulldrifter. 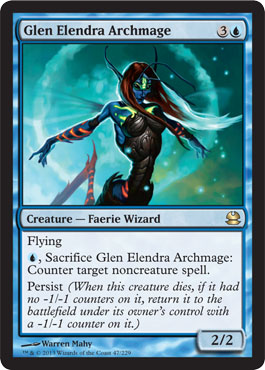 Glen Elendra Archmage affects a game of Magic like few cards before, or since, have. As a 2/2 flier for four mana, it's pretty unexciting. Then you get to the rules text, and a large, devilish grin appears on its controller's face.

Not only does it get to battle in the air for a few damage a turn, it also blanks a full two removal spells from our opponents' hand. Persist allows it to play its Negate ability twice. Even if it does mean losing the Archmage itself, it's a happy transaction as it can blank some really massive spells.

In normal Limited, this means removal. In Modern Masters, this means many things. This set has a lot of weird and interesting angles that traditional Limited environments don't, and many of them are noncreatures. Glen Elendra Archmage is one of the most annoying—and powerful—creatures ever printed.

Speaking of annoying and powerful, here is a fantastic spell to counter with your Glen Elendra Archmage: 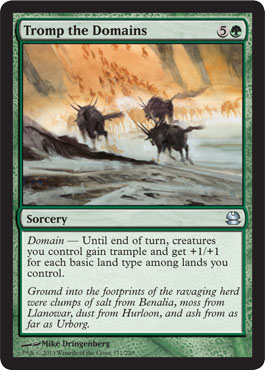 Overrun and I have a long and checkered past. I don't like it, and it doesn't like me. Thankfully, we regularly see effects like this at the rare slot these days. Tromp the Domains, though, is potentially bigger than Overrun, and it's at uncommon in Modern Masters. It does cost an extra mana, but as we have already seen today, cards like Kodama's Reach can help power out huge Tromps.

Tromp the Domains is splashable, too, and virtually any creature-based deck that plays more than two colors (one of which is green) will play this card. It's a crushing win condition, even with just a few creatures out. If you can amass a swarm of small creatures, Tromp becomes the most important card in your deck.

Our last preview card is my kind of card: 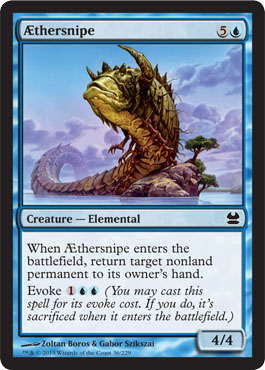 Æthersnipe, like Mulldrifter, has evoke. What this means in practice is that it's both a spell and a creature. Sometimes it's just a spell. Æthersnipe allows us to evoke it for three mana when we need to. Pesky permanents like creatures, artifacts, and enchantments are sent back to their opponents' hands. That part is all well and good, but the real fun happens when you hit that sixth land drop. Oh boy, the tempo swing is hard to describe until you have actually seen it.

Bouncing a key permanent while leaving behind a 4/4 body is very impressive. Perhaps you have resolved a Dinrova Horror in your day? This feels like that. The extra flexibility given to us by the evoke mechanic makes this card a solid inclusion in blue decks and ramp decks alike. 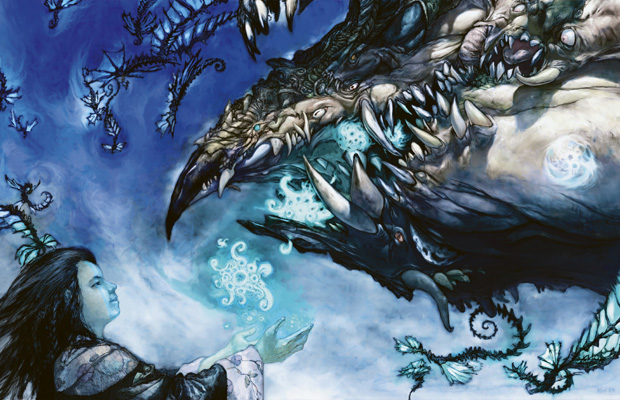 Modern Masters is a crazy Draft format. We have seen cards from archetypes like Affinity, Giants, Faeries, Ramp, Sunburst, and Suspend/Storm, just from the preview cards in these last three columns.

Remember when I brought up Time Spiral draft in relation to Modern Masters? Now you can see why. And we only really covered about five of the archetypes in this column. There are more, and with them, more mechanics and more synergies await.

Navigating these complex waters will be an interesting challenge, and one I hope we can embrace often. Modern Masters will be on Magic Online as a nonredeemable, draftable format, too. I have my eyes on that as my best way to draft the set multiple times.

No matter how many times I draft this set, though, I expect a challenging and interesting experience, and I wish the same upon you.