Posted in Limited Information on September 15, 2009

f you pick up a mana fixer in Magic 2010, such as Terramorphic Expanse or Rampant Growth, that means that you will have a slightly easier time casting your splashed Doom Blade, Pacifism, or Fireball. It will rarely mean that your deck is going to function all that much better than it would have without that mana fixer.

Sure, there are times when you have a lot of intense color requirements, like White Knight and Black Knight and a splashed Lightning Bolt in the same deck, and having a Terramorphic Expanse or two will make your deck run waaaay smoother than it would have without any fixing. But those examples are few and far between, because there are so few cards with heavy color requirements in M10. 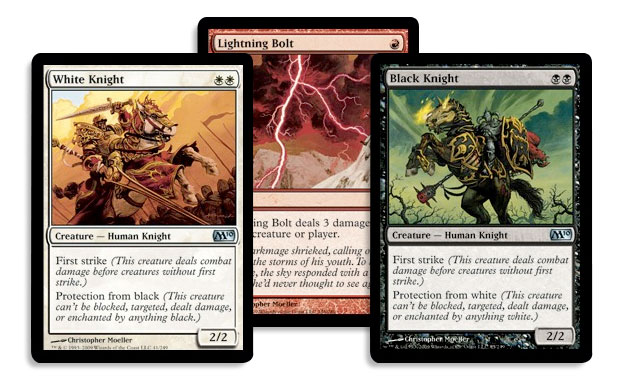 And if we look at Shards of Alara / Conflux / Alara Reborn Limited, we see an entirely different story.

In Shards / Conflux / Reborn, where you are regularly supporting three (or more) main colors, you absolutely positively have to have ways to fix your mana. If you don't have any land cyclers, Armillary Spheres or multi-color-producing lands, you could easily find yourself with something like a 7-6-5 mana base where you need to draw one of each of your lands early just to be able to get into the game! 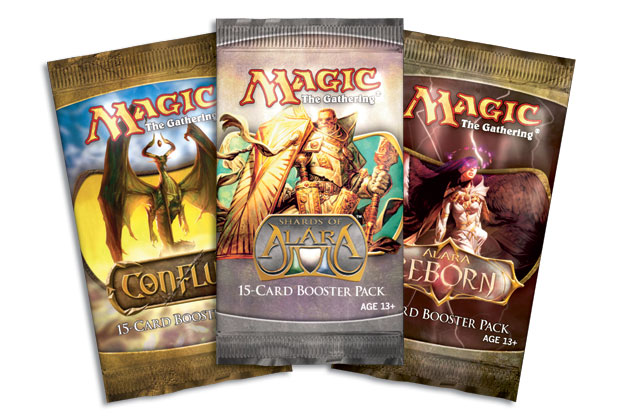 In Shards / Conflux / Reborn, people were using "kooky strategies" when they tried to draft two-colors decks that were built around the idea of not needing to fix your mana. These white-blue, green-white, red-green, blue-black, or black-red decks were quite aggressive and looked to get a significant edge by spending their early turns casting creatures while their opponents would be fixing their mana. When their opponents did start casting more powerful spells, the two-color decks would be able to play their answers, be they permanent answers such as Terminate or temporary answers such as Unsummon, while they continued to overrun their opponents.

In Magic 2010, being able to fix your mana is nice, but it usually isn't necessary. A lot of times you will be able to pass up on that Terramorphic Expanse third pack in favor of a solid creature or a middle-of-the-road removal spell without the decision coming back to bite you.

In Shards / Conflux / Reborn, you will sometimes need to take mana-fixing over very good spells so that you won't spend your games floundering around while your opponent makes short work of you. But in some formats, land searcher do more than just fix your mana.

In Invasion block Limited, you wanted to have as many basic land types in play as possible in order to power up your domain cards. Having full domain (one of each basic land type in play) meant that cards like Ordered Migration would give you five 1/1 flying tokens, Allied Strategies would draw you five cards, and Tribal Flames would deal 5 damage. These cards were still extremely impressive if you could "only" power them to four, but once the domain dropped down to two or three, they stopped being cards to drool over.

In Mirrodin block Limited, we had similar incentives to gain access to a lot of colors of mana so we could power up sunburst cards like Etched Oracle or Skyreach Manta would become huge.

But what if playing lands did more than just allow you to cast your spells, or get a little bit of extra utility out of them ...? 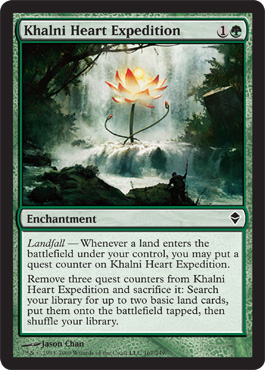 Khalni Heart Expedition is special in that it does not require you to spend a lot of time to get it down, but it provides you with a significant mana and color boost when it comes online. The problem is, it might be pretty hard to get it online. Especially if you don't have it in your first few turns. This is often enough of a barrier to turn what could be a very good card into one that is merely mediocre. Plenty of cards are good when you get the perfect run of cards—but if you draw them late, what's the point?

Fortunately for us, there are enough ways to "cheat" landfall counters onto this seemingly innocuous green enchantment that we can put it to good use even if we don't draw it early—or get it online waaay earlier than it should be able to.

If you have an enemy-colored fetch land like a Misty Rainforest, that's two quest counters right there—not to mention if you have something with a recurring ability that puts lands into play. Now admittedly, these specific situations are more likely to come up in Constructed, but I have no doubt in my mind that there will be enough able ways to get extra lands onto the battlefield in Zendikar Limited to make this card exciting. 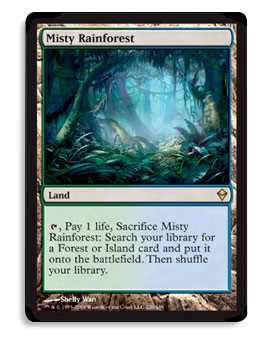 If your deck already has a heavy landfall theme, it will likely be easy for you to power up Khalni Heart Expedition. And once you do have it powered up, you will be able to use it to facilitate all of your other landfall cards. 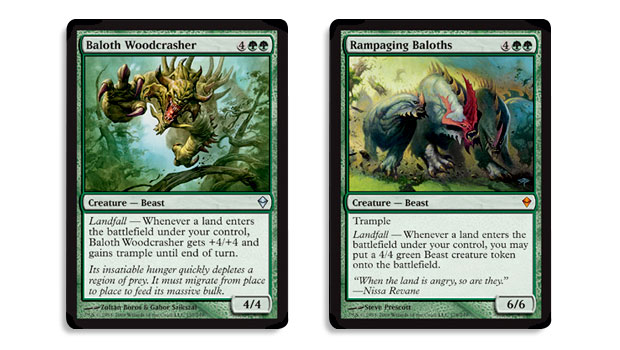 The menacing Baloth Woodcrasher and Rampaging Baloths both look like cards that are sufficiently powerful to warrant playing Khalni Heart Expedition, and if you have a Windrider Eel or two to go along with these ultra-powerful green six drops that will likely be more than enough of a reason to maximize the amount of landfalling that your deck can do. 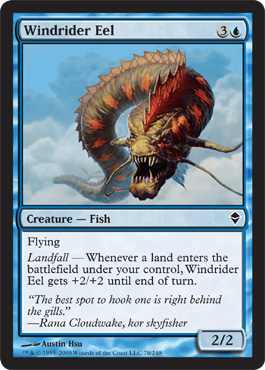 Now this is partially a testament to the power of Windrider Eel, but I suspect that a lot of the landfall creatures are going to be ready to thump your opponents so long as you figure out ways to keep the lands coming. 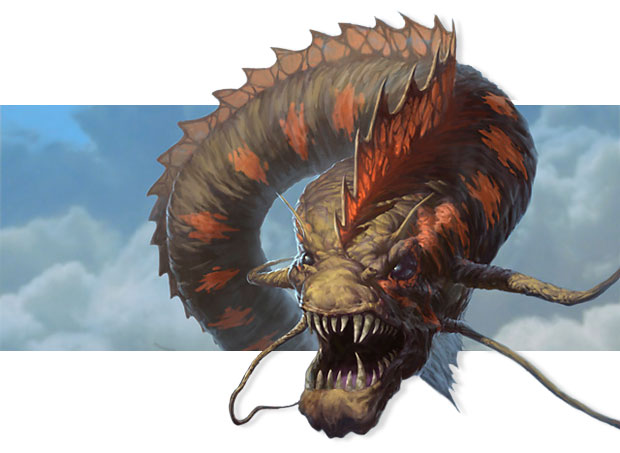 And Khalni Heart Expedition is a great way to do that. And do it at instant speed to boot!

But it's not all good.

If you don't draw your Khalni Heart Expedition by your third turn, you might have a significant amount of difficulty getting it to go online while its color fixing and mana boost are still relevant. Even if you cast it as early as your fourth turn, before you play your fourth land, it won't go online until you already have six lands. And at that point, it isn't all to likely that you will need that extra mana boost or that color fix. 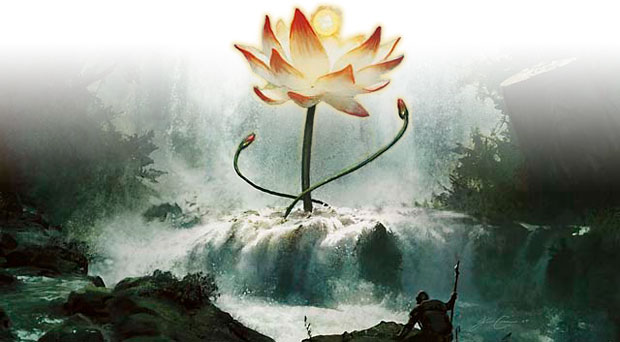 That means that if you aren't taking advantage of landfall, Khalni Heart Expedition probably won't do very much for you. Sure, it might help accelerate you into your end game from time to time, but it isn't going to be able to do that reliably enough for you to spend an early draft pick on it or even necessarily play it unless you have some extra incentive through cards like Windrider Eel.

And while that might seem like a bad thing at first, that just means that the landfall decks may be able to pick up Khalni Heart Expeditions pretty late. And that's going to be a very, very good thing for them.

I don't know all that much about Zendikar yet, but I do know that come Prerelease time I'm going to be paying very, very careful attention to cards that put lands onto the battlefield, and cards that get better when you put lands onto the battlefield. Khalni Heart Expedition fits both of those criteria. And while Khalni Heart Expedition might look awkward at first glance, I expect to see some very big things from it in both Limited and Constructed.

Posted in Limited Information on September 15, 2009