Posted in Limited Information on March 1, 2011

Silverskin Armor? Why should I draft and/or play that?"

Because you are looking to get metalcraft in a deck that doesn't have a ton of artifacts, or because you are desperate for additional pieces of Equipment.

You don't have to think about a card like Silverskin Armor for too long before you understand its applications. Even though Silverskin Armor is not a good fit in most decks, under the right circumstances it can do some pretty important things for you. 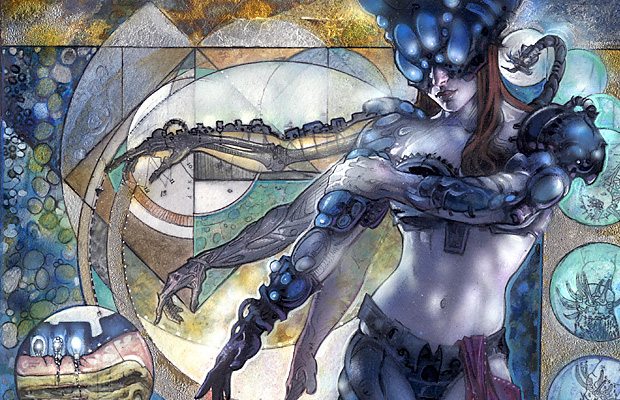 Silverskin Armor isn't an overly complex card. It doesn't have too many hidden applications (or at least I don't think it does), but it's just complex enough that you need to take a step back and think about how to utilize it properly and when it would be worth playing. 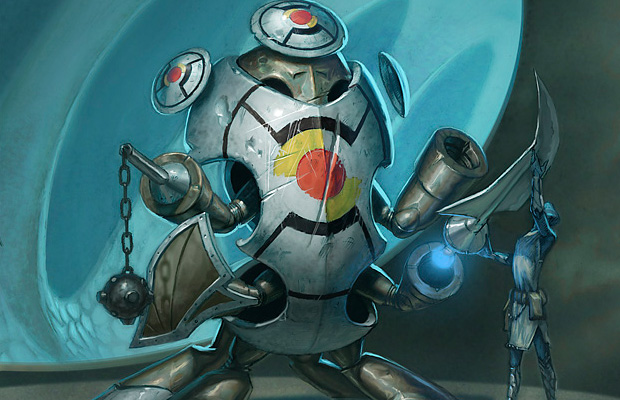 It is very rare that Training Drone will be better than a five-mana 4/4 (since you generally don't want to move all in on it early and risk losing two or three turns of mana investment to a single removal spell early in the game), and it will often be significantly worse as it has the potential to do literally nothing if you don't have any Equipment to pair it with.

So, like Silverskin Armor, Training Drone is a card that makes me think for a little while, but it isn't too hard for me to draw conclusions as to when it would be relevant, and what I would have to do to make those situations occur.

(Note that I will still take Training Drone late "just in case," but I won't spend a real pick on it.)

A card doesn't have to be complex, or wordy, for it to be difficult to properly evaluate. I've been overvaluing Hill Giants for the last eight plus years because they were really good when I started playing Limited back in the late 90s. I don't know why, but there's a part of me that just loves four-mana 3/3s with no abilities. 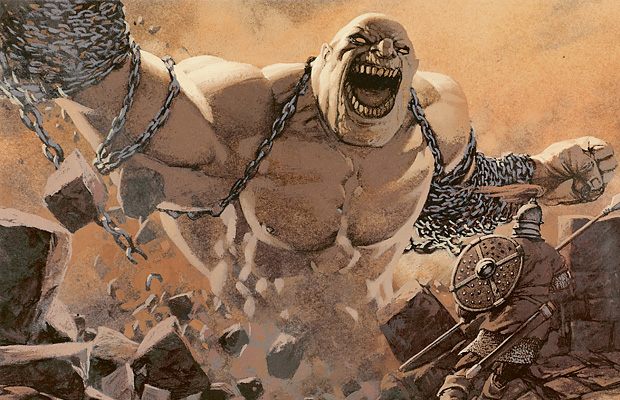 While I'm not going to take a four-mana 3/3 over an obviously superior card, once it ends up in my pile, it's going to pain me to cut it from my final deck. I have to think about things very deliberately to realize (or remember) that a four-mana 3/3 isn't very good in most formats.

All because I have it hardwired into my head that Ancient Kavu is a good card.

But enough about my quirks....

It doesn't take much to realize that Rot Wolf is an excellent card in infect decks. In other decks, Rot Wolf is still quite relevant. No, it isn't worth jumping through hoops for, but if you are playing anything other than an extremely aggressive deck, you will probably make room for it.

If so many people are happy to play Rot Wolf in their Limited decks, then why do many of those same people groan when they have to include a Cystbearer in their decks, or go out of their way to find a substitute for the 2/3 infector?

It's easy to wrap your head around what Rot Wolf does in a non-infect deck. "It's like a Phyrexian Rager, but you don't lose any life!" And if you happen to toss some Equipment like a Piston Sledge on it, you might even be able to poison your opponent to death.

Meanwhile, Cystbearer is just a 2/3 that can't attack for "real" damage in a deck that doesn't plan to win with poison. Icky, right?

Actually, Cystbearer is almost as strong as Rot Wolf in (most) non-infect decks and will at times be even better than the 2/2 card drawer. As I've mentioned before, both Cystbearer and Rot Wolf tend to act as lightning rods during Game 1, immediately drawing out spot removal from foes who are worried about getting poisoned to death. In these spots, the two are roughly equal.

In fact, Cystbearer is better than Rot Wolf in quite a few situations. 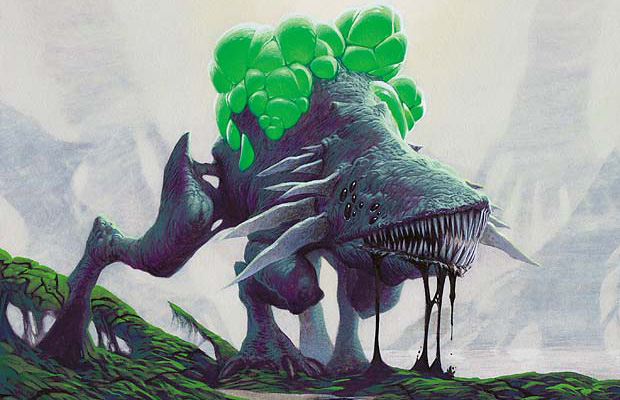 While Rot Wolf trades more profitably than Cystbearer, the fact is that Cystbearer has a very real impact on the board. If I'm playing a slower green deck, there are few cards that I would prefer to have in the lower part of my curve than Cystbearer. No, it won't help me put my opponent under pressure (most of the time), but it has the ability to hold off early onslaughts, or at the very least force an unfavorable trade for your opponent. It does that as well as almost any card in the format does.

If I'm trying to buy time until I can cast my Alpha Tyrranaxes and Fangren Marauders, then Cystbearer is going to be one of the cards that I look for first. If I'm trying to clog up the ground, I'm probably going to want Cystbearer rather than (or, more likely, in addition to) Rot Wolf.

Of course if I have a ton of removal and I'm trying to gradually out-attrition my opponent, then I'm going to prefer Rot Wolf to the 2/3 Cystbearer, as both of the cards are (probably) going to end up trading with an opposing creature and the Rot Wolf will net me an extra card in the process. 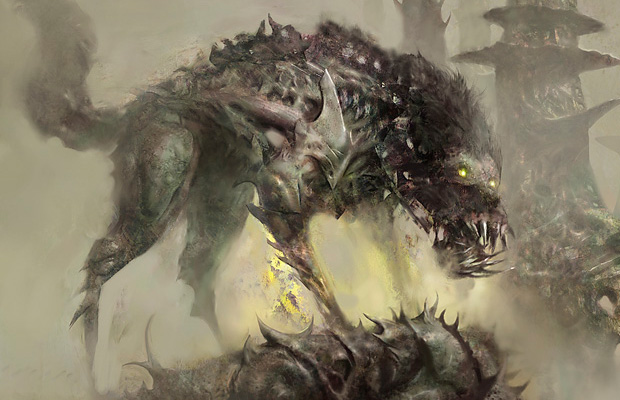 While I think that Rot Wolf comes out slightly ahead of Cystbearer in most spots, the difference isn't nearly so large that Rot Wolf should be considered an auto-include in non-infect decks while Cystbearer should get dismissed without so much as a second thought. Rather, both Cystbearer and Rot Wolf are good enough that they should be included in most decks that want/can afford another defensive minded three drop.

While some cards are obviously good, other cards are deceptively good.

You only need to read Rot Wolf once to realize what it does. Meanwhile, Cystbearer is just a 2/3 that can't even attack your opponent's life total.

I'm not suggesting that you should automatically play Cystbearer in your non-infect decks, but you shouldn't be banishing it to the unplayable pile as soon as you realize that you aren't planning on winning with infect. By the same token there are plenty of cards that look good—and often are good, in the right deck—but are actually quite weak if you add them to the wrong deck.

Tangle Hulk is good in artifact-heavy green decks, and it's a good sideboard card. But if you're playing against an infect deck—or a deck with a bunch of Shatter effects—then it's going to be a pretty disappointing five-drop even though it might "look" like a good card.

It is very important to understand how cards actually perform within the context of a format, or a matchup. For example, did you realize that Phyrexian Juggernaut is actually better as the only infect creature in a metalcraft deck than it is as the only artifact in a infect deck? 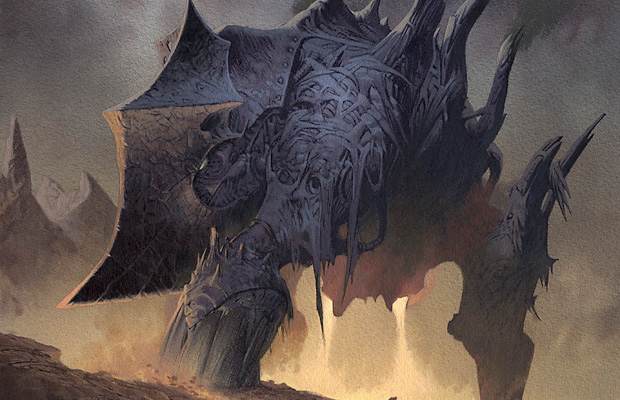 Because most of the Mirrodin Besieged / Scars of Mirrodin Limited decks have a number of Shatter effects. If you have only a single artifact in your deck, particularly if it's an artifact that costs six mana, then your opponent will usually have an artifact removal spell at the ready by the time you cast your Phyrexian Juggernaut. 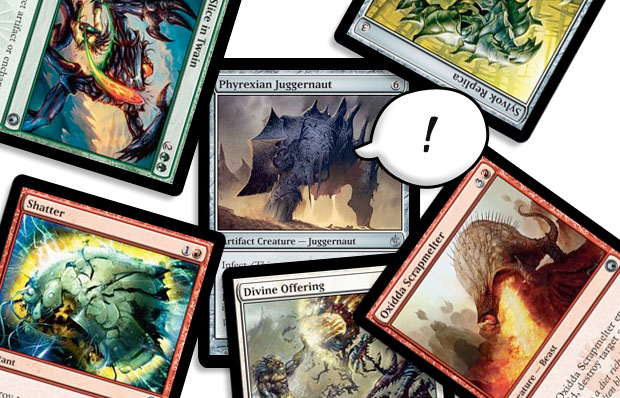 So if I have to choose between playing a Phyrexian Juggernaut as the only artifact in my infect deck, or playing a marginal, but on-theme, card like a Flensermite or a good off-theme card like a Quilled Slagwurm, then I will almost always go for one of my nonartifact options (heck, I might even opt for an extra land in my main deck). I might still side board in my Phyrexian Juggernaut if I don't think my opponent has, or is going to keep in, many Shatter effects.

So while Phyrexian Juggernaut is a nice addition to an infect deck that already has other artifacts, if it's just going to turn on my opponents' Shatters (which would otherwise rot in their hands), then I'm not going to want to play it—even if I spent a first or second pick on it.

Two Steps Forward, One Step Back

It's important to take a step back and reevaluate cardsm even very simple cards. I know that Hexplate Golem shouldn't be very good. I mean, seven mana? For a 5/7? And it's Shatterable? No thank you! 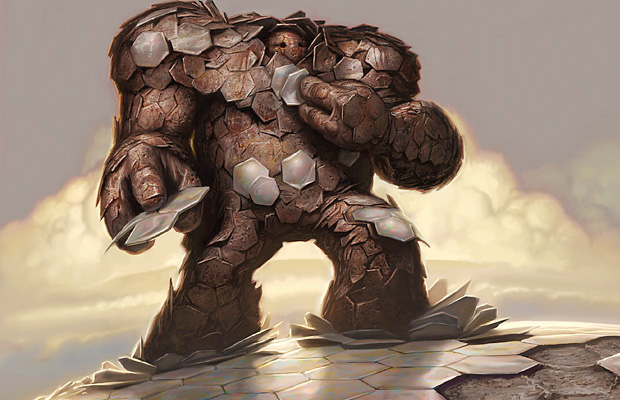 The first few times I looked at Hexplate Golem, I immediately dismissed it as unplayable. But a week or so later, I found myself sideboarding in Hexplate Golem in a slow match-up. And a week after that I found myself starting it in the main deck from time to time. If I already have a decent number of artifacts, and I need another finisher, I could do a lot worse than Hexplate Golem.

Don't feel embarrassed to talk or think about things like the proper uses for Hexplate Golem, Koth's Courier, and Cystbearer. While some might think of this as a "waste of time," a willingness to tackle these "obvious" questions will almost assuredly result in significant improvements in your game.

Posted in Limited Information on March 1, 2011