was asked to take part in a secret and ominous Magic tournament at the Wizards of the Coast headquarters in Renton, Washington. I didn't know exactly what was going to happen, but when the powers that be ask me if I want to draft, I have a personal rule of always saying yes.

This differs very little from my other personal rule of saying yes anytime anyone asks me to draft.

If you've had the chance to watch the video that was produced from that visit, you'll know that I was playing an early Conspiracy draft.

A simple idea: make a set focused both on the draft and the multiplayer experiences. It seems fairly obvious now, but working through all the details on this set had to be quite a challenge for the developers in Wizards R&D. Thankfully for us, we don't have to turn any of those knobs; we just get the shiny finished product.

I have to admit I was a little skeptical after I was told what Conspiracy was all about. I don't play much multiplayer, and I'm not particularly fond of it. I can never seem to figure out who to attack, plus the etiquette on this varies greatly from group to group. The politics confuse me as well, and I don't particularly love games that go on for too long. I do love drafting, though, and I knew there would be some curveballs in this format that I wouldn't want to miss.

Trying new things out is good, and it sounded like a sweet idea, so I dove in head first.

I was not disappointed. I had a great time playing Conspiracy. The company I had for the draft was a big part of that, but the set itself was a blast, too. I could totally see myself drafting this again. I view it more as an event than a new Magic set. I picture a room full of friends with a booster box of Conspiracy and a great night ahead of us. 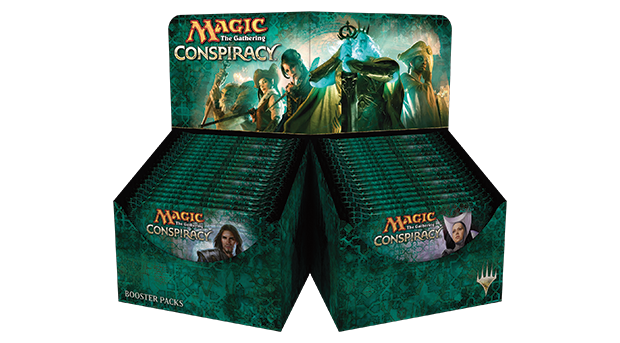 Still, you can't take the nuts and bolts out of the Spike, and I found myself exploring the different strategies available as we played out our match.

One of the articles for which I have received the most positive feedback is my piece "The Value of a Card." What if we took the opportunity cost of running a card in our deck off the table, and got to run the card without actually putting it in our deck? It's such a strange concept, it's hard to imagine. In Conspiracy, we get to do this.

Sharing the same name as the set itself, conspiracy cards are cards that you get to play but don't take up an actual card slot and don't cost any mana.

Not just free to cast, but they also don't take a slot in your hand, replacing something else potentially more powerful. They don't even live in your deck; they exist in the command zone, instead.

The only cost to playing conspiracies it that you have to use a draft pick on them. This is a real cost that has to be factored in, but once you clear that hurdle, you are playing every conspiracy you have.

As you might expect, they generally don't have a huge effect on the game. There's a lot of card naming and secrets with these conspiracies. Some of them have you name a card before the game starts, and the named card is affected by the conspiracy in some way. These are called hidden agendas. They add an exciting and interesting dynamic to the game that I haven't experienced before in Magic.

Our preview card for the week is a hidden agenda card, and it's kind of insane. Have you ever been firmly locked into a solid two-color deck, but in pack three you open a sweet Planeswalker or bomb in another color? The temptation to splash it or move into its colors can be strong. If you are a regular reader of this column, it won't surprise you to know that it's incorrect to derail a perfectly good deck just to take a bomb you either can't or shouldn't play. This is the correct play, but it's also not what your heart wants you to do.

Now, you can do what your heart wants you to do, with Unexpected Potential: 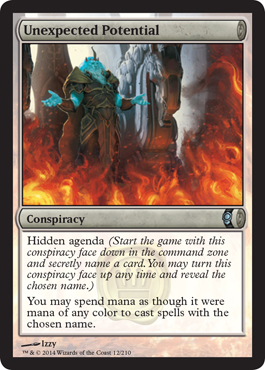 This card is so cool. It frees us from the chains of our own deck!

You take this card at some point in the draft, and then you keep your eye open. We are now looking for the most powerful card we can find, regardless of color.

Any card is fair game. When you open that huge off-color bomb in pack three, you can confidently windmill-slam it knowing that your Unexpected Potential will be sitting safely off to the side, enabling you all the way. What freedom!

Even if you never open a big splashy bomb card, you can still easily splash premium removal, some evasive threat, or even a key sideboard card. And if you get multiples of that card, Unexpected Potential works on all the copies in your deck. Additionally, you always get the conspiracy card whenever you need it, as it's tucked away in your command zone at all times.

Unexpected Potential is a license to be greedy, signed and notarized by Wizards of the Coast.

The strategy I took in the video was to take conspiracy cards early and often. I ended up running a full six of them, far more than anyone else in the draft. I gave up some picks for them, but I still was able to make a good deck. Except I had six free, game-affecting spells in the pocket at all times. I won't claim to know what the exact ratio of conspiracies to non-conspiracies is, but I will say I was happy to have as many as I could get. 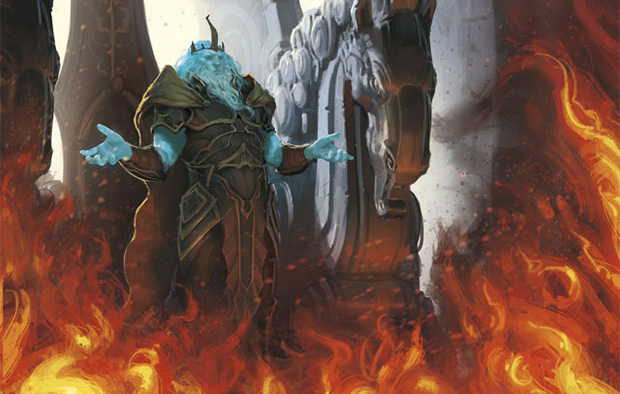 As Magic players, we sometimes let ourselves get a little too pigeonholed into some certain way of playing. I'm a drafter. She's a Commander player. He's a Constructed player. I mentioned before that I'm not a huge fan of multiplayer Magic. I'm just glad I didn't let a minor thing like that stop me from experiencing a fun set with a lot of great people.

Just as it's important to branch out in Limited, it's important to keep an open mind about other formats as well. I think we can all agree that booster draft is the best possible way to play Magic, but that doesn't mean there aren't others, right? In this case, we get to draft our decks—featuring some downright nutty cards that mess with the draft itself, too—and then build and play them.

If you like multiplayer Magic, drafting, having a good time with friends, or pizza, my guess is that you'll enjoy Conspiracy too.