Not a Matter of Æther Or

egardless of the format, you need to find productive ways to live long enough to win a race with your evasion creatures, dominate the game with incredibly powerful spells, or simply swarm your opponent.

Unlike black, or red, or sometimes even white, blue rarely has the ability to flat out destroy creatures. Sometimes blue is fortunate enough to get a card like Narcolepsy that can permanently deal with a top threat for the bargain basement price of

, but cards like Narcolepsy simply don't come along every day for blue. 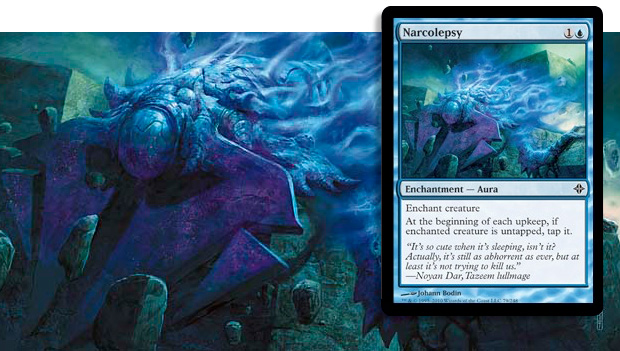 In general, one of the best ways that blue can pick up valuable time is by bouncing creatures.

Depending on the format, bounce spells range from being pretty incredible to pretty mediocre. While this difference depends in large part on the abstract quality of the bounce spell itself, the format that the bounce spell exists within is just as important of a factor in determining its real value.

How Much is Too Much?

Sometimes, it's very worth it to spend two, or even three mana to be able to bounce a creature, even if you don't get anything to show for it beyond getting that nasty permanent off the board for a while. For example, in Rise of the Eldrazi Limited, players will happily spend three mana to Regress a permanent. This is a good deal because there are plenty of costly monsters, such as Ulamog's Crusher, that you absolutely need to get off the board. Also there are plenty of powerful Auras that you can permanently deal with by bouncing the creature that they are enchanting.

Other times, players are unhappy to spend three, two, or even a single blue mana to be able to bounce a creature with an Unsummon. Players are sometimes uncomfortable playing Unsummon type cards because the time that you gain from bouncing a key permanent is offset by the fact that you lose a physical card to do so. Yes, you gain a lot of time by Unsummoning a creature for the low, low cost of a single blue mana, but if the game is going to go extremely long, being down a spell can be very costly. 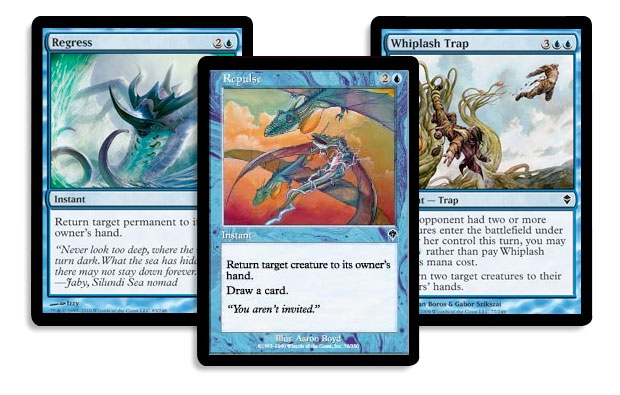 In some formats, you have to pay a lot of mana to bounce even a single permanent. While players are happy to spend

on a Regress in Rise of the Eldrazi Limited that can bounce Ulamog's Crusher and permanently deal with Mammoth Umbra, not all formats present such juicy targets to bounce.

Fortunately, even if you aren't dealing with powerful totem armor Auras, there are still times when your bounce spells do a lot more for you than simply "return target creature to its owner's hand."

If you are spending that mana on a Repulse that draws you a card, or a Whiplash Trap that bounces two creatures, then the mana investment that you put into your bounce spell is often very worth it because you are getting a lot of value beyond simply bouncing a creature from your spell. 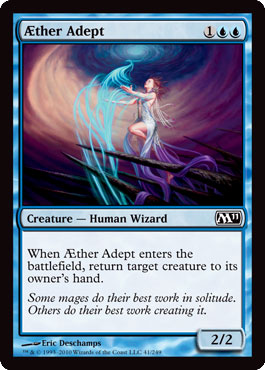 Æther Adept might not be quite as easy to cast as its predecessor Man-o'-War, which came in at the splashable bargain price of

. Æther Adept still offers a very powerful effect for a very low price for anyone who can use it.

If you have the blue to support Æther Adept, then it is going to be a must play in any sealed deck and a very early pick in any draft deck.

No, Æther Adept is not a "bomb" in the traditional sense of the word, but there are few better ways to pick up time than with this three mana Unsummoning 2/2. Early-mid way through the game, your relative board position will change dramatically the moment your Æther Adept hits the board. 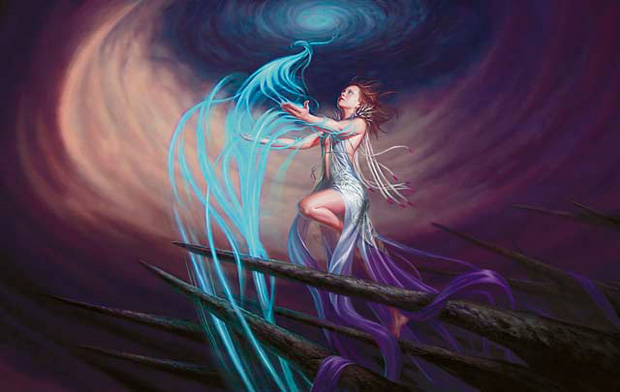 While I wouldn't take an Æther Adept over something ridiculously powerful like a Conundrum Sphinx, a Baneslayer Angel, or a Fireball, I would have no problem first picking it, and will likely value it in about the same way that I value top removal spells like Doom Blade or Lightning Bolt. 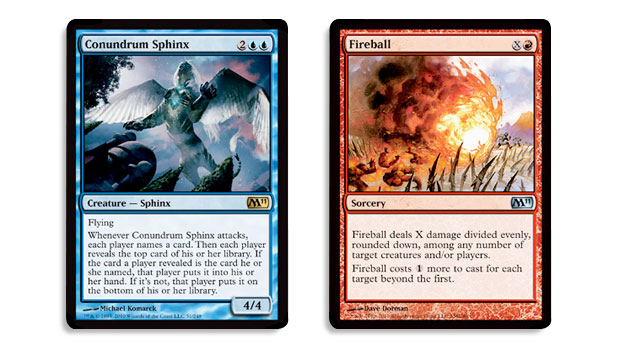 If your opponent is expecting that you will only be able to do one thing on your turn, he or she will be sorely disappointed when you slap down Æther Adept.

If you are behind, Æther Adept will buy you a bunch of time to get back into the game with. If you are ahead, Æther Adept will press your advantage, giving you extra time to make big attacks and forcing your opponent to spend yet another turn casting his or her creature. 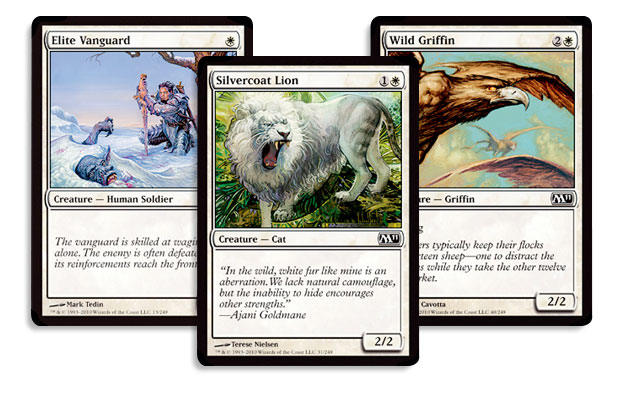 During the early-middle stages of the game, a 2/2 body can make a large impact on the board. If you've started out ahead, casting a Silvercoat Lion and a Wild Griffin before your opponent has had the chance to cast anything, and you are able to bounce his or her first creature with an Æther Adept, you are going to be a pretty huge favorite to win. If you are able to throw an Elite Vanguard into that kind of start, things are going to be stacked even further in your favor.

Even if you don't get off to a blazing start that gets topped off with an Æther Adept, your

Human Wizard is still in a good position to deliver some final nails in your opponent's coffin.

Later on, you will likely be able to bounce a higher impact creature (get out of there Ancient Hellkite!) and Æther Adept's 2/2 body can still act as a key roadblock in a close race that you will eventually win with an evasion creature. 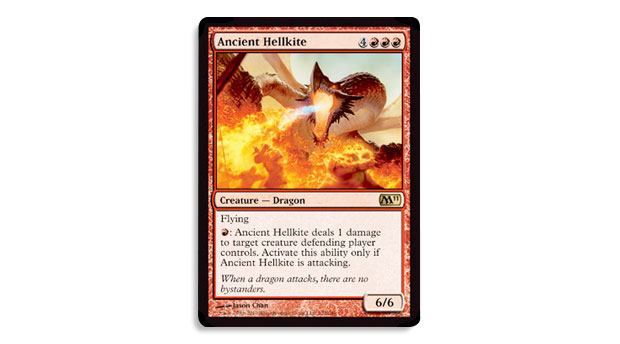 Or, if your race is taking place mainly on the ground, Æther Adept might still become a key attacker late in the game, allowing you to effectively swarm your opponent who was hoping to take over the game with giant green fatties.

Even More Than You Bargained For

While Magic 2011 certainly won't have the same density of powerful Auras as Rise of the Eldrazi does, there will still be Armored Ascension, Unholy Strength, Volcanic Strength, and even the occasional Primal Cocoon that will allow you to get even more value out of your Æther Adept than you expected to when you first picked it. 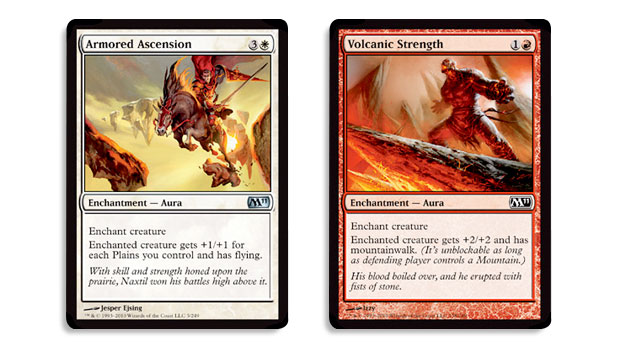 Just because it is possible to get a two for one, permanently deal with an Aura, get a 2/2 body and pick up extra time by bouncing your opponent's creature, doesn't mean that you should be too greedy with your Æther Adept—at least not in Game 1.

There probably aren't going to be enough Auras in the set to be able to realistically wait for your opponent to cast Armored Ascension or whatnot. And even if you did know that your opponent had a good Aura, if you wait too long to cast your Æther Adept you run the risk of losing a lot of equity should the board get too cluttered for the 2/2 body to mean much. 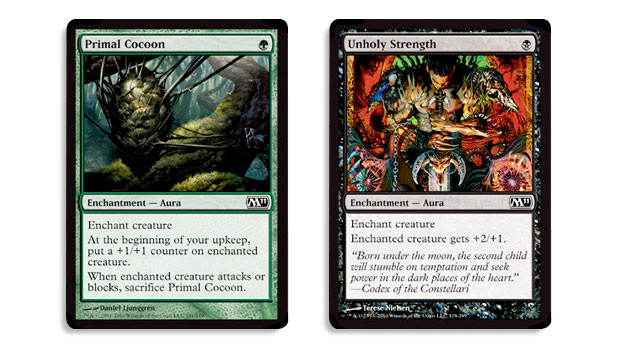 Sure, you should wait to cast your Æther Adept if you have other, better plays to make. Also wait to cast if bouncing your opponent's best creature won't make much of a difference to the board and you are already in a comfortable position. Or if you are already ahead and you know that you would rather have your Æther Adept on hand in case your opponent did something powerful that you need a temporary answer for.

Just be careful. A lot of the time, if you are trying to get more than you bargained for with your Æther Adept, you will actually get much less than you could have. If only you had simply acted at a point where you could pick up a lot of key time and gotten in a really good attack by plopping down your

Æther Adept is at its best in aggressive decks. It doesn't take much imagination to see how great it is to have a curve that goes Elite Vanguard, Ajani's Pridemage, Æther Adept. 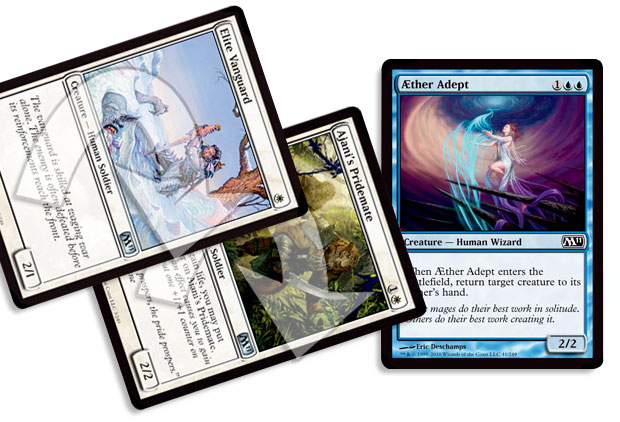 Don't get me wrong, Æther Adept still plays a hugely vital role in slower decks, buying you a ton of time and even opening up the possibility that you will be able to put the pressure on early. But if you have an Æther Adept, or two, your deck will suddenly have the ability to put together some of the most (relatively) explosive starts imaginable.

This means that if you start your draft off with an Æther Adept, you should look to slightly favor aggressive cards that you can complement it with. No, you shouldn't derail your draft just because you have an Æther Adept (it will be very good in any deck that you draft that can cast it) but you should realize that Æther Adept has the ability to make aggressive strategies far more viable than they might be otherwise.

What Type of Mana Do You Need

While you definitely want to have eight or more blue sources for Æther Adept so you will have the ability to somewhat reliably cast it early, there's no shame in playing Æther Adept in a deck that has as few as seven, or even six blue sources.

If, however, your deck is going to be light on blue sources, the value of Æther Adept drops somewhat dramatically. If you are only playing six or seven blue sources, you can look at Æther Adept the same way that you would look at it if it cost five or six mana—it will be very difficult for you to cast it until you get deep into the game.