One at a Time

xalted is a frequently misunderstood mechanic. No, you probably won't have to think very hard before deciding how to attack if you have a bunch of exalted creatures and a Vampire Nighthawk, a Tormented Soul, or an Arctic Aven. 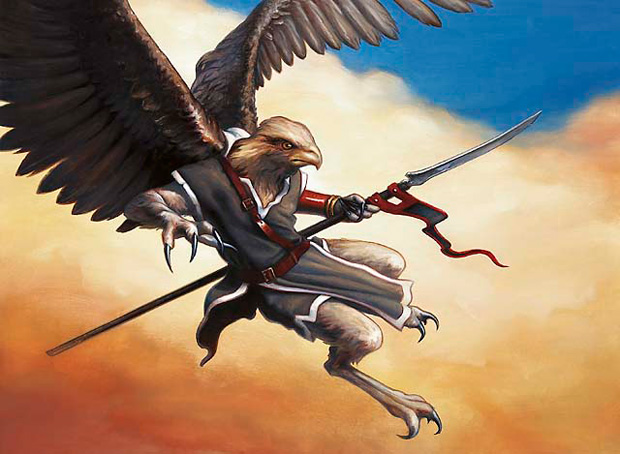 But if it's turn four and you're trying to decide whether or not you want to attack your Aven Squire into a Wind Drake, or your Knight of Infamy into a Centaur Courser, then you're going to need to be mindful of your long-term game plan before you make your decision.

If you don't have any other exalted creatures in your deck, and you're about to play a Captain's Call or a Talrand's Invocation that you want to swarm your opponents with, then by all means attack in.

If you don't have any good way to block your opponent's creature, then once again it will probably be in your best interest to attack, as you will be happy if your opponent takes the damage or if he or she accepts the trade you're offering.

But if you think you can reliably neutralize your opponent's threats, then you probably don't want to trade your exalted creature for one of your opponent's creatures...

Even if your opponent's creature is "better" than your exalted creature, if you can drag the game out to the point where you're attacking with a 4/5 or a 5/6 Griffin Protector every turn while your opponent doesn't have any good way to punch through for damage, you're eventually going to win the game.

Consequently, defensive decks that look to clutter up the board and make attacking profitably a nearly impossible proposition for opponents can make great use of exalted creatures. The fact that defensive decks usually only want to attack with one creature at a time anyway means that the limitations on exalted are a less significant factor than they would be in an aggressive deck.

So while it can fit in fairly well into all but the most aggressive of decks, Guardians of Akrasa will do a ton for you if you're drafting a controlling, or an evasion-heavy, exalted deck.

Similarly, Giant Scorpion, Kraken Hatchling, Vedalken Entrancer, Healer of the Pride, and even the much-maligned Pillarfield Ox are good at helping you hold down the fort while you attack away with one creature at a time.

But if you're having difficulty finding good high-toughness creatures to fill out your deck with, then you probably won't be able to cut your opponent off from making good attacks with any degree of regularity. In that case, you're going to need to come up with a different plan.

Ajani's Sunstriker can be a bit underwhelming in most decks. Sure, if you're on the play and you cast Ajani's Sunstriker on turn two, you might be able to get a few hits before your opponent is able to deal with it. But most of the time, it's just going to be a color-intensive 2/2 that gains you 2 life once. 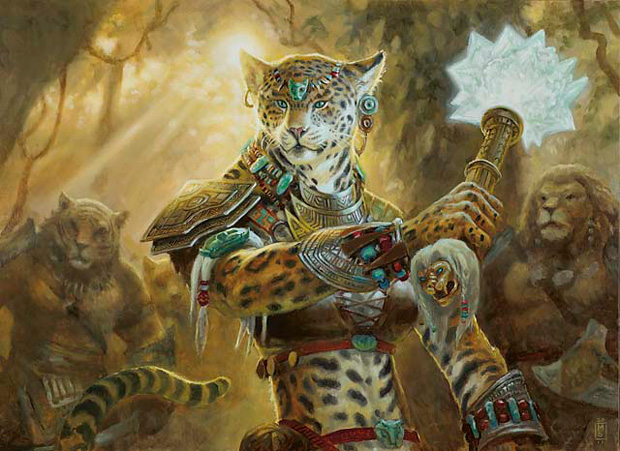 But if you have exalted creatures (along with other ways to enhance your Ajani's Sunstriker) then that all changes. Suddenly, you have a formidable threat that makes it very difficult for your opponent to outrace you.

So if you don't think you can put together a deck that's good at dissuading your opponents from attacking you, then you should instead focus on ways that you can survive long enough to force your opponent to make some very unfavorable trades, and eventually die, at the hands of your exalted threats.

This means that you're going to need to make the most out of cards like Ajani's Sunstriker and the unblockable Tormented Soul, as well as cards that give you a lot of good blockers...

On the surface, Captain's Call might look out of place in a deck with a lot of exalted creatures. In practice, however, Captain's Call tends to be very strong in decks full of Aven Squires and Guardians of Akrasas.

If you know you need to buy enough time to attack with exalted creatures, then cards like Captain's Call and Attended Knight, which buy you that time (while simultaneously giving you creatures that can become potent threats thanks to your exalted bonuses), can be absolutely crucial parts of your plan.

Plus, there will be games where you are either unable to lean heavily on your exalted creatures, or you simply don't have to. In that case, being able to swarm your opponent with a bunch of Soldier tokens can be a great way to pick up a quick victory.

You don't need to regularly swarm your opponent to have an effective aggressive deck. Early pressure plus exalted creatures can give you a particularly potent long-term plan as your 2/2s and 3/3s that might have otherwise been unable to break through your opponent's defenses will suddenly become as big as your opponent's biggest blocker.

And if you have an evasion creature like a Tormented Soul or a Welkin Tern, you might want to just attack with that every turn while you continue to build up your army.

Not only will you be hacking away at your opponents' life totals (which will eventually lead to their demise), you'll be making it increasingly difficult for them to attack you back, as you'll be able to launch a big counterattack should they ever leave themselves vulnerable.

So while you might not want to plan every game around your exalted creatures—and you might not even want to main deck that Guardians of Akrasa that you took early in the first pack—if you have an Aven Squire and a Servant of Nefarox in your deck, you should keep your eyes open for opportunities to attack with one creature at a time.

While exalted can help you win long, drawn out games by making otherwise ineffective creatures into potent threats, not every game will develop in that way. If you fall too far behind early you're frequently going to be forced to block with your exalted creatures in order to keep yourself alive.

So don't ignore your early game just because you have a vision for how you want things to play out. If you get a bunch of good, cheap creatures to fill out your exalted deck, you'll also gain the ability to quickly win games where your opponent stumbles or you opened on a Duty-Bound Dead, a Knight of Infamy, and a Giant Scorpion.

No, Guardians of Akrasa might not be as effective as a Captain's Call in most scenarios, but if you already have a bunch of good exalted creatures to go with it, then you're probably going to want to go with the three-mana 0/4.

So when you're drafting an exalted-heavy deck, make sure to keep an eye out for additional exalted creatures, evasion creatures (you need a way to break through, after all), and creatures with high toughness.

If you do that, you should be able to put together powerful decks with relative ease.