Posted in Limited Information on February 26, 2014

elcome to Tribute Week! We have touched on the tribute mechanic a few times already, but this week we go deep. We are going to cover every single Magic card with tribute ever printed. That's right, all eleven of them. We are going to talk about how tribute works, its strengths and weaknesses, as well as what we can learn from the mechanic. 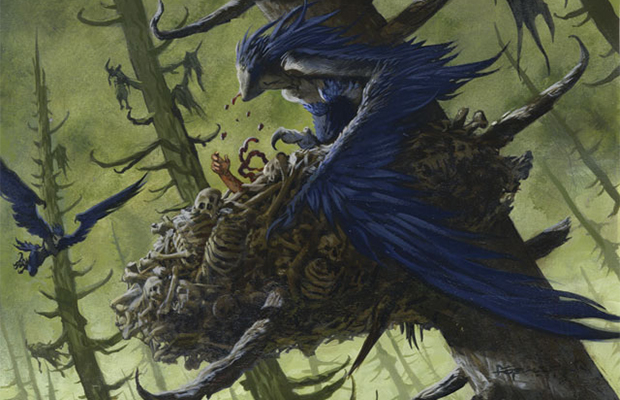 Tribute represents a fascinating set of knobs and levers for our friends in R&D to fiddle with. Normally, they are roughly constrained to casting cost, abilities, and power and toughness. Creatures with tribute are essentially two cards in one; they cost the same mana but can have vastly different outcomes.

I have the feeling that a good amount of work went into getting these cards not only balanced, but also playable. They are exciting cards to read, and if they were just plain bad it would be a shame.

Thankfully for us, they aren't.

Giving our opponents choices is bad. I'm sure you have heard this sentence before, and it's generally true. A game of Magic is a zero-sum affair: what is good for them is bad for us, and vice versa. This incentivizes our opponents to always make the decision that benefits them the most. When it comes to paying tribute, this will depend on the cards in their hand, on the battlefield, and what their overall route to victory looks like.

If they are holding some spot-removal spell, they won't mind letting us have a big threat for cheap; they are just going to kill it anyway.

The way we combat this is twofold:

Let's look at this whole gap thing I've been talking about.

I had an idea when I was first looking at the tribute cards. My hunch was that the bigger the gap in the difference between "card A" and "card B," the worse the tribute card would be. I was mentally taking each tribute card, splitting it into two separate cards (card A and card B), and then seeing how different they were. My assumption was that a smaller gap would create a more consistent card, and leave our opponent without the ability to maximize on one direction or the other. 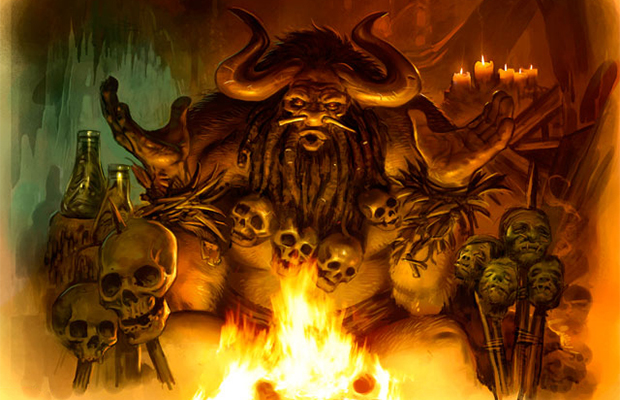 I still like my theory, and I think it held up well after we got to see all of the tribute cards. One thing I'd like to add to it, though, is that even if the gap is big, as long as both end up as powerful, board-swinging effects, it can still be a good card. We'll see a couple of examples when we get to the actual cards.

The whole reason I came up with the idea at all was so that I could take it as a logic weapon into battle versus the throngs of hopelessly hopeful sufferers of BCSM that frequent my local Magic haunts. Both the inspired and tribute mechanics seem to hit a nerve among the Best Case Scenario Mentality faithful. For tribute, I think they saw two great options and just kind of figured that it didn't matter which they got; they would be happy either way.

For some of the tribute cards, this is pretty much true. For others, though, it's less so. We have to respect our opponent and his or her decision-making ability when it comes to these cards, and we have to recognize we will always get the worst possible version of the cards. While this is a sizable hit to the power level, it doesn't mean they are bad.

Let's look at them and see what we learn.

A great example of a small-gap tribute card, Fanatic of Xenagos exemplifies two very similar threats in a potent, efficient package. This is what I was thinking of when I first thought of the whole gap thing. Present two very similar (and aggressively costed) threats, and our opponent is stuck between the proverbial rock and hard place.

We should expect great things from Flame-Wreathed Phoenix, what with being a mythic rare and all. And it delivers the fiery goodness, no doubt about it. Similar to Fanatic of Xenagos, the gap on this card is small. You are either getting an efficient, evasive beater or an efficient, evasive beater. The two cards differ a bit, but either way, they are presenting a similar problem for our opponent. I think this card gets a lot worse for Constructed, where sweeper effects are commonly played, but for Limited it's all upside.

Now here is a gap. Nessian Demolok is our first huge gap card, and the first we get to put to the test. Not only is the gap big as far as creature size goes, the two cards are just such different beasts. My guess is that, most of the time, Nessian Demolok is going to blow up a random land and be a 3/3. This is not too bad, depending on the point of the game. If we are talking about turn four or turn five, I like that. But in late-game stalls, this card can be just miserable. You rip a 3/3 for five mana that does almost nothing—unless there is some valuable noncreature permanent laying around the battlefield keeping our opponent alive, in which case he or she will have to deal with a 6/6 vanilla creature.

This card is particularly difficult to evaluate, as the gap is so big that it will vary from devastating play to near-blank topdeck.

It's hard for this rare to miss. Nessian Wilds Ravager has a fairly large gap, but at rare, R&D can make both sides so good that you kind of don't care. Still, if your opponent has any answer to a single creature, you miss out a bit, as he or she will always just give you the 12/12 for six mana. (!!)

Even with two powerful halves, you can see how the gap being this big means you'll never really live the dream with this card. Still, it's a powerhouse either way you slice it.

Another big gap card at rare, Oracle of Bones adds conditionality to the mix as well. I like the design space here: you have to figure out what kind of threat you can handle, but also if the caster even has anything in hand to cast with it. Often, he or she won't. My plan is to just never pay tribute and hope my opponent doesn't get too much acceleration out of the deal. I think the gap is big and the card's power level suffers for it.

Ornitharch is probably the tribute card with the smallest gap. Either way you slice this pie, you are getting 5 power and 5 toughness in the air. As a result of the incredibly narrow gap and the relatively high power of the card, it comes in at perhaps the best non-rare card in Born of the Gods.

Pharagax Giant has been one of the most difficult of the tribute cards to evaluate. Another card with a big gap, this usually means it's not as good as tribute cards with a smaller gap. Every time I read both sides of the card, I think that they are good. But in practice—and also just in my gut—I think the card is mediocre.

I'm going to give the Giant some more time to marinate, but I think his power gap may be too much to overcome.

Shrike Harpy has a big gap as well, but both sides are good. I know I am always getting the worst of the two options, as we discussed earlier. But I can't help but think that killing anything and getting a 2/2 flier out of the deal is ever that bad. And I don't need to sell you on 4/4 fliers for five mana, I'm sure.

I'm curious to see if Shrike Harpy bucks the trend. If both ends can have enough raw power, does it matter how big the gap is?

Siren of the Fanged Coast is similar to Shrike Harpy in terms of gap, and half of the card is the same as well. In my experience with this card, the gap size is big, but both sides are so powerful that it tends to overcome it. Mind Control effects have been effectively eliminated from non-rare slots in Limited of late, and getting even a whiff of one here represents a huge board swing.

I have stolen vanilla 2/1s and been quite happy with my Siren. That about sums that up.

Snake of the Golden Grove has a big gap, with kind of middling outcomes at either end. Nothing about this card is particularly disappointing; it's playable. It just doesn't really push the boundaries, and I suspect it's going to be a 4/4 that gains you 4 life most of the time. A fine—if unexciting—card.

Thunder Brute exhibits a narrow gap and a lot of upside on either end. It's basically a Dragon: a bomby threat to put in the top end of your curve and finish off your opponent with. It's yet to be seen how well a 5/5 trampler with haste does in the format, but I know an 8/8 trample for six mana is going to be a handful. I like the small gap and big returns on this six-drop.

I mentioned above that we would ideally build our deck to best suit our tribute cards. Looking at it another way, we would only include the marginal tribute cards in the right deck. A Pharagax Giant looks a lot better if that 5 damage is enough to finish off an opponent after a blazing start. Now the opponent has to deal with a 5/5 after attempting to stabilize from a quick assault.

The same goes for Thunder Brute. As a curve-topper in an aggressive deck, he can just finish the game as either mode. If he is the first real threat you have played during the course of a game, he gets worse.

Tribute is difficult to evaluate. My guess is that we will continue to change our evaluation of these cards, and eventually have it fine-tuned down to which archetypes they are best in. For the more powerful tribute cards, they are just so good on either side that they will see play no matter what.

Remember: giving your opponents choices is generally bad. They will always take the option that benefits them the most. It's up to us to do this as seldom as possible, and to mitigate the damage by playing our tribute creatures in the right deck, and picking the right ones as well. Even the timing on when the cards are played can have a big effect on the outcome.

And, no, even though it says "an opponent of your choice may place +1/+1 counters on it," you can't force them to put the dice on your creature. You are going to have to do that yourself.

Posted in Limited Information on February 26, 2014