Posted in Limited Information on April 6, 2010

ome cards are quite good in a certain Limited format, but would be quite weak outside of that format. Take for example, last week's preview card, Vent Sentinel. This 2/4 defender is going to be good specifically in the context of this upcoming format. In most formats, a 2/4 defender that lets you spend several mana a turn to ping your opponents wouldn't be anything too special. It would simply be something you would play if you absolutely needed an extra blocker, or a way to win very long games. However, in Rise of the Eldrazi Limited, Vent Sentinel promises to be a very good card due to the format's high density of good defenders. 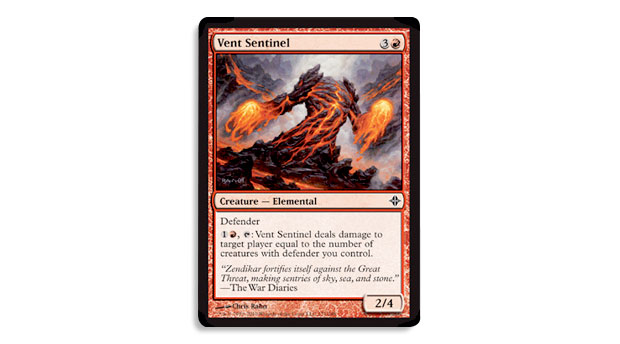 Other cards are quite good in the abstract, but actually end up being pretty underwhelming within the format that they are printed in. Take for example Roil Elemental in Zendikar Limited. While the 3/2 creature-stealing flyer is certainly nothing to scoff at, if it were printed in a slower format it would be much better than it is now. While I have first-picked Roil Elementals, there are many, many other cards that I would rather take over one in a Zendikar / Worldwake draft.

This week's preview card, on the other hand, would be quite good in any Limited format, but is looking to be even better than it would be normally this time around.

Before we talk about the card's applications, let's make sure that we know exactly how the card works with a little help from the Rise of the Eldrazi FAQ.

Many spells and abilities in this set cause you to put Eldrazi Spawn creature tokens onto the battlefield. These tokens all have the same characteristics. 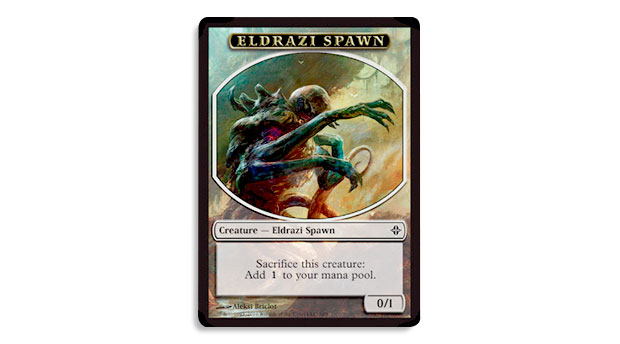 * Sacrificing an Eldrazi Spawn token to add {1} to your mana pool is a mana ability. No player may respond to it. You may activate the ability while you're casting a spell, you're activating an ability, or a resolving spell or ability requires a mana payment from you, for example.
* Some abilities affect Eldrazi Spawn. Such abilities affect these tokens, of course. Such abilities also affect Mistform Ultimus and creatures with changeling, since they have the creature types Eldrazi and Spawn.
* Not all creatures with creature types Eldrazi and Spawn have "Sacrifice this creature: Add {1} to your mana pool." These tokens do only because the effects that create them say that they have that ability. Mistform Ultimus doesn't have that ability, for example. If an Eldrazi Spawn token loses its abilities, you'll no longer be able to sacrifice it for mana.
* Some of the instants and sorceries that create Eldrazi Spawn tokens have targets. If all the spell's targets are illegal by the time it resolves, the entire spell is countered. You won't get any Eldrazi Spawn tokens.

If Kozilek's Predator were simply a 3/3 for four mana, it would be a playable card. No, it wouldn't be anything special if it were just a 3/3, but Hill Giants have always been very solid options to fill out your Limited decks. If it were a 3/3 that gave you a single vanilla 0/1 token with no other abilities, it would be a very solid inclusion in your Limited decks, giving you a key chump-blocker to help you win close races. If it were a 3/3 that gave you two vanilla 0/1 tokens, it would probably be worth taking pretty highly, especially in a format that is already known to be populated by enormous monsters that will often need chump-blocking. 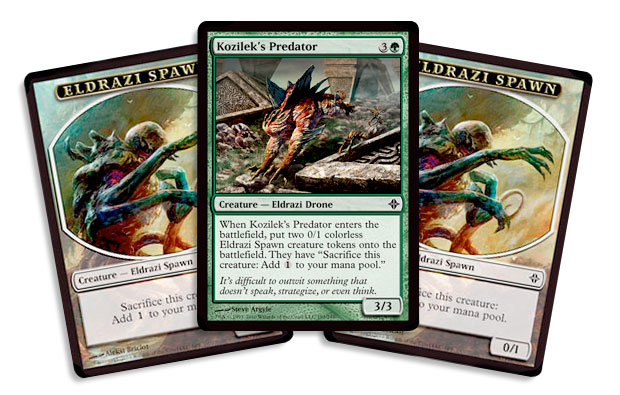 In Zendikar / Worldwake Limited, Kozilek's Predator would have been an extremely high pick because of its ability to swing races heavily in your favor. The fact that you could also use it to help you power out game-breaking spells way ahead of schedule would have just been gravy for most decks.

However, it's the very fact that you get two tokens that you can sacrifice for mana that makes Kozilek's Predator something very special regardless of the format.

While we will need to know more about the set before we can determine for sure whether Kozilek's Predator will be a great card or simply a good one, I feel pretty confident speculating that it will be a very high pick for green drafters. From what little we've seen of the set so far, we already know that there are going to be tons of huge—and expensive—Eldrazi spells that we are going to want to cast. 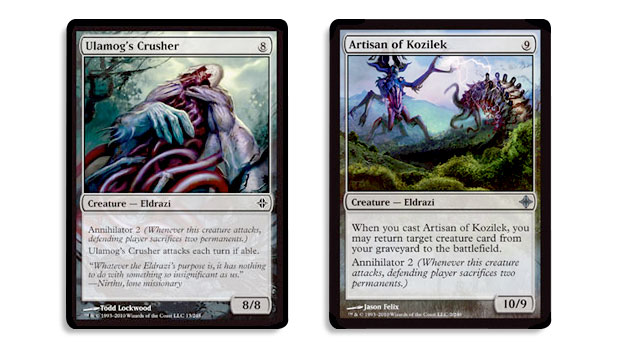 Yes, Artisan of Kozilek is extremely powerful once you get it on the board, but you're going to have to work extra hard to make sure that your deck can put together the requisite nine mana needed to cast it. Heck, Ulamog's Crusher is a common, and it certainly packs quite a wallop, for an admittedly pricy eight mana.

It looks like it's going to be pretty easy for anyone who wants to get their hands on a humongous Eldrazi creature (or three) to do so. But just because you want to have an 8/8, a 9/9, or even a gigantic eleven-cost Ulamog, the Infinite Gyre in your deck, that doesn't mean that you want to fill your deck with a million cards that do nothing but provide you mana. Sure, you could fill your deck with 23 or 24 mana sources plus accelerators, but if your opponent is able to deal with your first monster, you're going to find yourself in really tough shape (if you even survive long enough to cast it).

Here the beauty of Kozilek's Predator reveals itself. Kozilek's Predator and other creatures that generate Eldrazi Spawn allow you to run a large number of mana sources, without lowering your density of spells that directly affect the board. You get two mana to use whenever you see fit, and you get a 3/3 body. Quite the deal for a mere four mana. 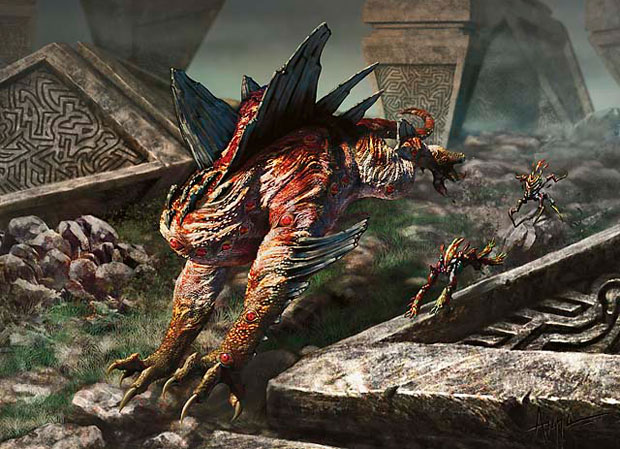 Even if you aren't using the mana the Eldrazi Spawn tokens generate to put together a lightning-fast start, you will still be getting an enormous amount of value out of the Predator if you are using them to allow you to cast an otherwise (virtually) uncastable spell.

Just because Eldrazi Spawn tokens are 0/1s doesn't mean that you won't need to use removal on them from time to time. If you know that your opponent is trying to accelerate out an eight-plus mana cost Eldrazi spell, then you very well might find yourself in a position where your best play is to point a piece of direct damage at a deceptively unassuming 0/1 token. 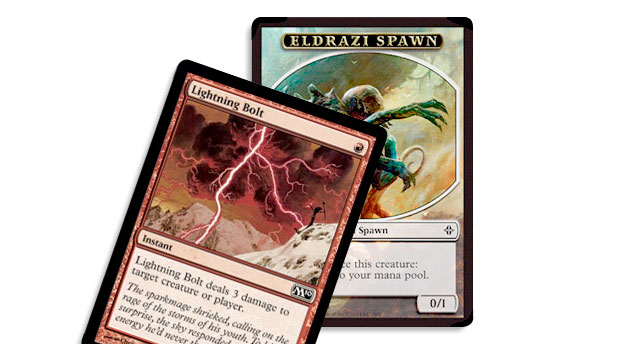 Sure a Lightning Bolt type card will generally take down something much more threatening than an 0/1. But, if you have a material advantage on the board and you know that you can't handle a Ulamog's Crusher type card, then you should feel good making the play that will stop your opponent from beating you outright.

I can't stress this point enough—don't hesitate to make this type of play!

While it's clear that Kozilek's Predator is going to be a very good Limited card, it might even have some serious Constructed applications. 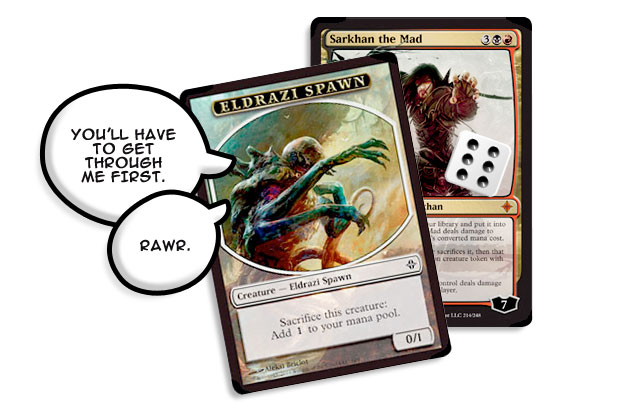 An early Broodmate Dragon can have some seriously negative consequences for your opponent's health, and simply being able to put some extra punch into your Mind Spring or Martial Coup can be the difference between winning and losing. Then there's the ability to protect our planeswalkers from oncoming attackers. And we haven't even mentioned any of the Rise of the Eldrazi cards that you might want some extra mana for. And you still get a solid body in the process!

While it might be a bit ambitious for me to think of uses for Kozilek's Predator in the upcoming Standard environment, I wouldn't be at all surprised if it finds a home in Zendikar block Constructed. If you can power out a giant Eldrazi creature with annihilator before your opponent gets his or her game going, then I don't think you will have any trouble winning.

Posted in Limited Information on April 6, 2010