rereleases aren't like other tournaments. There is a tangible excitement—a buzz in the air—that isn't quite like any other Magic tournament. You get that nervous energy thing going on at a PTQ, and the massive feel that precedes a Grand Prix. But Prereleases hold the promise of the unknown. 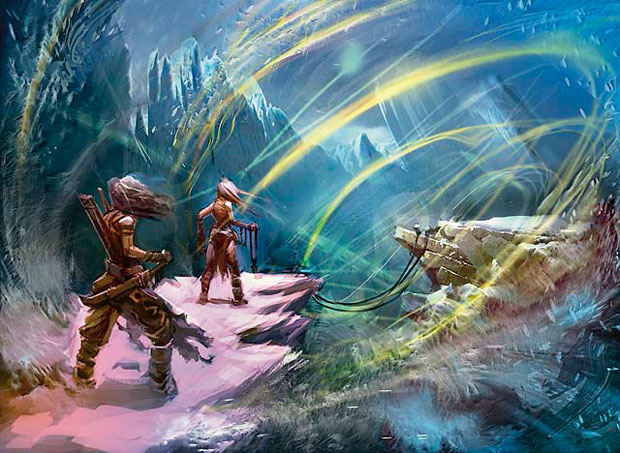 Many players who go to Prereleases go without having even looked at the Card Image Gallery for the new set. They want that fresh, exciting feel of opening a pack and having very little clue what could be inside. I can respect that.

I don't do it myself, though.

No, if you are anything like me, you eat up all the new cards as they are revealed, and pore over them during the week leading up to the Prerelease. I'll dissect them, examine them, put them in Petri dishes, see what grows, then do it again. I want to walk into that Prerelease knowing as much as I can about the cards, the interactions, the whole set. Mainly I do this because I feel it gives me the biggest edge possible against the field. This is my nature as a Nuts & Bolts Spike.

I want to win the Prerelease.

While I have accepted that this is just how I am, I also took some time to question it and see if I was applying my energies correctly.

I found that I wasn't really maximizing what I should have been during the Prerelease time.

I was nice to my opponents and let them take stuff back when they didn't understand a card. I'd help them rebuild their deck after our match, or help people settle arguments over this card or that card.

I started to realize that this was the more important part of the Prerelease experience: fostering a good Magic community.

I realize I'm not exactly out on a limb here when I say that nurturing a local Magic community is a good and worthy thing to do. I'm actually being more specific in this case than just claiming it's a positive action to take; I'm saying it's my main goal at a Prerelease.

I have a lot of goals when it comes to smaller local events, especially Prereleases. My first goal was always to win the tournament. While I still hold that goal every time I go, it has fallen from the #1 spot. 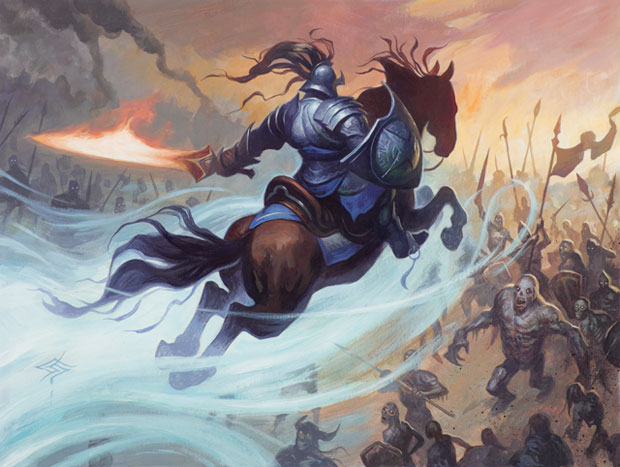 I believe that the most important thing at a Prerelease is to make a welcoming and inviting environment for new players to join our community. I have many reasons for wanting this. I believe that it's not only better for the overall community, but it's better for you, long term, to have more players entering your local Magic community.

Prereleases offer a unique opportunity in Magic. They are a time when new, uninitiated players first come to check out what all the hype is about. They are a time when even the casualest of casuals will leave the comfort of that well-worn kitchen table and brave the scary world of tournament Magic. There are players who only ever play Prereleases. That is the entirety of their Magic experience.

These are all people who I would like to see more of. I'd like to see them at the local shop's FNM, at local GPTs, and eventually at the PTQs in the area. I'm not just saying this as a player of the game who wants to see it flourish. I'm saying it as a hardcore Spike who loves winning.

Remember, the person who comes to the Prerelease, finds it to be a welcoming scene, and then comes back for FNM, is the person who you will likely be playing against for the coming months and years. That person will take his or her lumps (we all had to at some point) and then will improve and find his or her place in the local hierarchy. That's just the way it is, the circle of life. You can't help it if you are the apex predator in your particular ecosystem.

I say that partially in jest, but from a big-picture perspective, it's quite true. It's better to have new players entering the fray from a whole-game view, as well as from your own eyeball view. You are rewarded for your kindness and generosity by keeping the system going. It benefits you from a Spikey, min/max, gamer perspective, and simply from a human perspective as well.

That's why I changed my priorities for Prereleases. I felt that it was better for the overall community, and also for me as an individual player. And that is more important to me than winning any one Prerelease.

Spike Does What Spike Do

Still, I'd much prefer to win the Prerelease while fostering a welcoming environment than lose the Prerelease while doing the same. These things are not mutually exclusive in any way, and being prepared, knowing the cards, and simply having more experience than your newer opponents is nothing to shy away from. I have no shame in my game about who I am. I'm a Spike, and I came here to win. We all have the ability to look a bit further past the match at hand, though, and see a bigger picture.

With that in mind, let's look at some of the ways you can help out uninitiated players at a Prerelease.

Having somewhat recently come back to Magic, (it's been more than five years, but it feels like yesterday), I remember clearly what it was like to go to my local shop for the first time. In short, it was intimidating. The players all knew each other, they spoke a tongue that sounded closer to a foreign language than it did to English, and they had the ins and outs of tournament play memorized like it was completely natural. 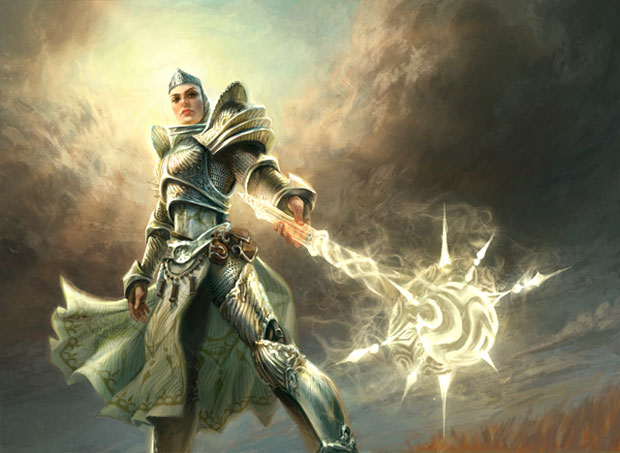 I didn't know what a Tarmogoyf was. Or what "Thoughtsys" were. And I didn't know the people. That was probably the toughest thing. I'm a personable guy, I like talking to people, and I wasn't the youngest person in there or anything like that. I had a good job, was an adult who was comfortable with who he was. And still, it was intimidating. I can't imagine sixteen-year-old me walking in there. I don't think I would have said a word. (Then again, I would have just been playing basketball and not worrying about Magic, but alas, I digress.)

It's hard to imagine what it's like for new players at one of these things. They have so much to catch up on, and until they do, they can feel pretty darned alone. Communicate with them. Don't just assume they know all the rules and procedures.

I have seen this so many times, and it frustrates me every time I see it:

This is where I usually step in and do some explaining. The fact is that mana weaving, and improper deck randomization, are serious errors that need to be corrected immediately. That's fine. I get that, and I try hard to convey that to new players. The key, though, is that you explain why these rules are in place. You have to assure them you are not in any way accusing them of cheating, but that in order to protect the integrity of the game, they have to follow these rules.

With a simple explanation, 99% of players will understand and accept the rule. Simply taking the burden of blame off of them allows them to listen to the logic behind the rule, and not feel personally attacked. Being accused of cheating (whether it was an intended accusation or not) is a huge red light for new players, and the likelihood of their return diminishes if they leave the shop feeling like that.

Easy on the Slang

I love our little language that we have. I love the absurdity of some of the sentences I say as a commentator on official event coverage. It's not every day you get to say something like this:

"So I battle with my 'Goyf, he blocks with his Snapcaster, I 'Bolt my own Sculler just to pump my 'Goyf by three, forcing him to crack his fetch, then pop his Relic..."

Even though this (admittedly unlikely) scenario pushes the boundaries of our slang use, things like "swing," "alpha-strike," and "chump" are all terms we take for granted, yet can make little sense to a new player. (How the heck did "swing" come to represent the word "attack," anyhow?) If you can tell new players aren't grasping some of what is being said, explain it to them.

They will learn all the juicy slang in no time, but their first Magic tournament isn't a great place to learn it all at once. 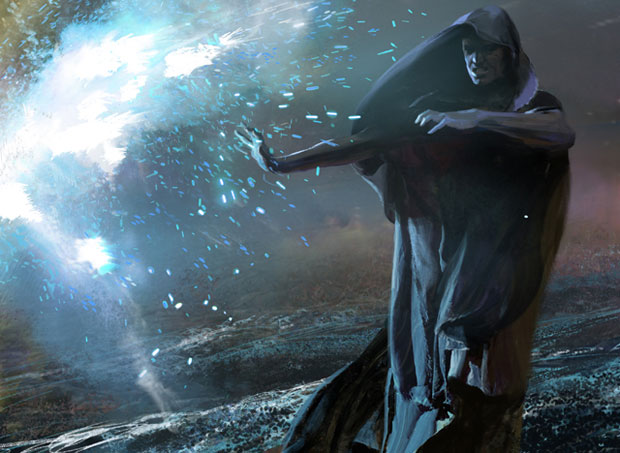 One thing that is really tempting but ultimately not worth it is to correct or rebuild every mistake new players make with their decks.

I try to keep that part very simple. I make sure they have forty cards, no more, no less. I make sure they have seventeen lands. And I make sure that they aren't playing anything absolutely abhorrent. I'm not talking about fringe playables here, but just the truly junky stuff. Get that Bountiful Harvest out of their deck for them, but let them have their Reckless Brute. There is plenty of time to turn the dials; the goal here is just to prevent them from having a completely terrible time playing awful cards.

You might be the best player at your shop. The fact that you are reading this column shows that you want to improve your game, and that you are interested in the daily happenings of Magic. That's awesome. What you don't need to do is set out to prove this to the new player by being overbearing or overly authoritative with your opinion.

Simply offering help and suggestions is a great way to pave a nice path without trampling all over someone. (There goes that slang again...)

I know this week's column is a bit of a departure from our normal fare. I think that the subject is important enough to warrant a main topic, though, and I hope you will join me in welcoming the herds of new players to our weird and awesome world this weekend.

For the game itself, and for you.