ro Tour Dragon's Maze is this weekend. I will be in San Diego with the rest of the coverage team to bring you the high-level action, live on the stream. This is traditionally one of the more exciting times for Limited fans. Dragon's Maze is still fresh, and the competitors in this particular Pro Tour have to grasp what is ultimately a very complex format in a relatively short period of time. While that may mean endless nights of drafting for them, it also means we are going to see many different things on camera. 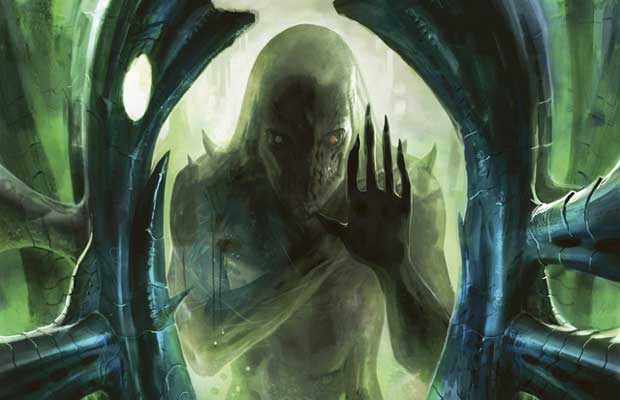 As I have mentioned before in this column, the full Return to Ravnica block draft format is kind of insane. People are still getting their sea legs about them as they discover new archetypes and interactions with every new draft. There is much to learn, but the ones who put in the time to really draft this format a lot will have a huge advantage over those who don't. This format, more than any in recent memory, will punish those who don't put the work in. While this sounds somewhat intimidating, what it really means is that we get to see skilled professionals craft amazing decks on camera in San Diego. It also means we might witness some true train wrecks along the way.

The term "going deep" is Magic slang for playing too many colors, or playing a strategy that is perhaps... ambitious. Have you ever drafted a five-color deck in a format that really wasn't set up with the fixing needed for such a thing? Or maybe you just had a sweet idea for a card or combo you wanted to try, and even though you knew it wasn't the most optimal strategy, you went for it anyway?

Example: I once drafted Rise of the Eldrazi and opened an Emrakul, the Aeons Torn. Even in a ramp-heavy format like Rise, getting to fifteen mana was, well, "ambitious." Nevertheless, I decreed that this was going to be the draft in which I hard-cast Emrakul, the Aeons Torn. My friends balked, but I cast that big bad spaghetti monster twice in that draft, cementing the legend at the local card shop. I have to admit that it was far from the best strategy, but I wanted to go deep, and deep is where I went.

That happened at a local game store draft. We are talking about the Pro Tour here, with a lot more at stake. Yet, even with all of this on the line, we will have some people going very deep. It's bound to happen. This format not only encourages you to do so, it even rewards you sometimes.

This is going to make for some fantastic viewing. Whether they succeed in a hail of high-fives from their teammates, or crash and burn on camera, it's going to be fun to watch.

My predictions are that most people will attempt to stick to a solid three-color plan. Most of the three-color options give a good amount of flexibility, power, and ease of mana. Sure, you have to dedicate a few slots to Gates and maybe a Cluestone, but overall you can pick good, game-winning cards. I think this will be the default stance of the format in San Diego.

Since the default stance just won't do for many pro players, five-color will be present as well. It's just too tempting for many hardcore drafters to pass up the opportunity to play as many Gates, bombs, removal spells, and awesome creatures as possible. Why limit yourself?

One big question I have is if two-color decks will be regularly drafted or will be the exception. The consistency and speed accorded with sticking to one guild is tempting. Images of our opponent fumbling around with Gates and Cluestones while we attack for 3... 7... "You're dead" come to mind. There are practical issues with this strategy, as the overall power level of the deck will usually be lower than the three- and five-color decks we will likely face. A good Boros or Rakdos deck can put enough pressure on our opponent that we can win with even a mediocre draw as long as it's accompanied by some reach. (In this case I'm using "reach" to mean the ability to get damage in after our opponent has stabilized the battlefield.)

What do you think? Let me know on Twitter if you think the format will be mostly three-, two-, or five-color decks. I'll be curious going into the coverage booth what my Limited scientists predict for this event.

Here are some cards from Dragon's Maze that have caught my eye as potential role-players and pitfalls in the format.

Let's start with a big trap card. Hidden Strings looks fine on the surface. A quick glance reveals a lot of text (has to be a good thing, right?), but closer inspection shows some major flaws. Hands of Binding was a card that garnered respect as the Gatecrash format developed. It could act as a conditional removal spell, and it could represent a substantial tempo swing if timed correctly.

Hidden Strings does not live up to this pedigree.

The bottom line on this card is that its effect is just too weak. Sure, it can tap a blocker (or two) so that you can get in for some damage, but after that initial turn, it does almost nothing. The key is that it doesn't help the encoded creature get past the blockers on subsequent turns. Tapping down creatures after damage is rarely relevant, and giving your creatures a weird form of vigilance isn't exciting either.

The truth is that Hidden Strings isn't worth a card slot in your deck. Essentially any creature, or even an extra land, will often outperform it.

Where might it be good? I haven't found a great spot yet, but I'm sure there are some crazy things you can do with this card in the ideal situation. Repeated tap effects from creatures or permanents can be abused to big effect. Mostly though, these are corner cases at best.

While we are on the subject of trap cards... let's take a look at Riot Piker. The eleventh Goblin Berserker in a proud line of Goblin Berserkers (including the actual Goblin Berserker), this one does not fly the flag highly for its team. When I first saw the card, I was kind of impressed. A 2/1 with first strike for only two mana? Seems good. The attack clause was annoying but I figured I would be attacking with it anyway. First strike is a form of evasion in that it's a deterrent from becoming blocked. Power enhancers—particularly instant-speed—can make creatures with first strike scary.

So what's the issue?

This format has a ton of ways to block a creature like this. And by block, I mean eat. A full cycle of 2/4 creatures at common in Dragon's Maze, for example. And that's just the tip of the iceberg. The cruel reality for this particular berserking goblin is that he rarely survives a turn and, without help, he is unplayable.

I like to keep an open mind, though, and try to consider when it could be good. There aren't a lot of feasible situations for this guy, but Madcap Skills goes a long way to making this card playable. If there were a red-based, hyper-aggressive archetype around, he would fit in there too.

This card has really impressed me. As part of a WUB (or "Esper" as it was called in Shards of Alara) deck, this creature shines. A substantial 3/4 body and a nasty static ability combine to make it a control deck's dream five-drop. Remember Horror of the Dim? That guy occasionally snuck into the twenty-three. Haunter of Nightveil is a card that can act as the cornerstone for a constricting control deck.

Quick story example: I was playing at my local game store and my opponent cast Haunter of Nightveil versus my aggressive Boros start. Not only did it completely halt my offensive, he used Stolen Identity the following turn to make another one. As if two 3/4s weren't enough of a problem for a deck with a bunch of 2/2s. Turning them into 0/2s was just plain mean.

I think this is the go-to stabilization play for turn five if you are in these colors.

I had to read the initial chunk of rules text twice. For a minute, I thought my mind was playing tricks on me. I saw that this card was in Simic colors, but wasn't it just this?

As it turns out, it wasn't. As weird as it is to have a card with the same main text in Simic as another card in Orzhov, that's exactly what we have here. One Thousand Lashes is a little more taxing thanks to its loss-of-life clause, but Krasis Incubation has a different, awesome angle attached to it.

Sometimes you just play it on your opponent's best creature, and there it stays until the game ends or that creature dies. In that case, it's Arrest for

Remember, Simic doesn't normally get access to hard removal like this. It usually has to bounce, fight, pump, and tap its way through the opposing forces. Then along comes Krasis Incubation and it gets legitimate hard removal for four mana.

And I haven't even covered the second part yet. You can use Krasis Incubation to not only move it around to other, more threatening creatures, but you can put it on your own creatures as well. On a stalled board, with plenty of mana available, this card becomes a Dragon factory. Just play and return it to turn any innocuous creature into a scary threat.

And the best part is that after you grow your team to lethal levels, you can just throw it on your opponent's best blocker and bash away with a big grin on your face.

This Pro Tour might be one of the best ones to watch for fans of Limited like you and me. I am lucky and have a particularly good seat in the commentating booth, but my job is to be your eyes and ears when I'm there. I hope you can join me on the stream this weekend. See you there!