Put Your Hands Together For ...

ust a couple of days ago, Martin Juza rose to the top of the 1800+ player Grand Prix–Bochum to take home his second Grand Prix title in as many months.

What type of a deck did Martin Juza use to take down this humongous tournament? Infect, that's what! 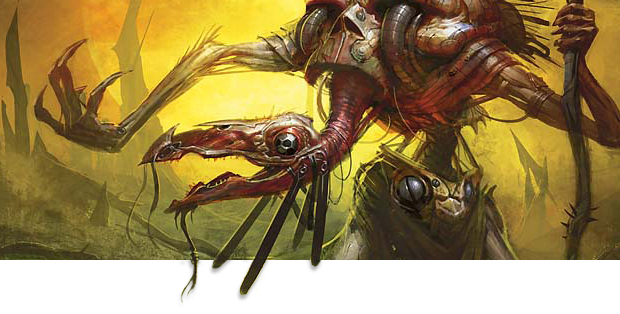 And what an infect deck it was!

2 Hand of the Praetors
40 Cards

Without any rares, Juza would still have had a fearsome deck. But when Juza picked up a second Hand of the Praetors in pack three with his seventh pick in the third pack of the draft, it put his already very impressive infect deck over the top. 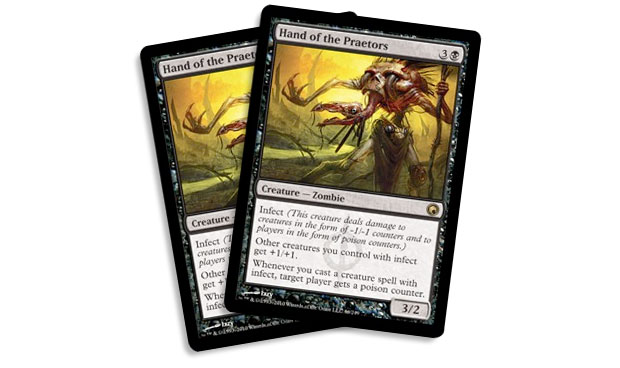 Three matches, six games, and sixty poison counters later, and Martin Juza was able to put his hands (of the praetors) together in celebration as he had just won another Grand Prix.

For their cost, infect creatures tend to do a lot more than creatures without infect. After all, you only need to put ten poison counters on your opponents for them to meet their demise, whereas you need to deal 20 damage (or more if your opponent decided to gain some life) to walk away with a win.

Not only that, but infect creatures tend to be much better in creature-on-creature combat than regular Goblins, Elves, Humans and Myr are. If two normal creatures get into combat with one another and they both survive through the bout, then, unless you are about to cast a direct damage spell or give your opponent's creature some -1/-1 counters by some other means, then you will have gained nothing from that confrontation.

But if an infect creature bounces off of a Vampire Warrior, a Wall, or a Construct, that opposing creature will end the turn a lot smaller than it was when it began thanks to the many -1/-1 counters that it now has to carry with it for the rest of the game.

Enough Poison to Kill a Man

Sure, a couple of infect creatures, like a Tangle Angler and a Necropede, could be fine additions to any deck. But if you pick up about seven infect creatures and seven regular creatures you will often find yourself having a lot of trouble actually killing your opponents.

Your opponent could be on the brink of death in so many ways, but if you are unable to actually deal that final point of damage, or inflict that tenth poison counter on your opponent, it will all be for nothing.

So what are the implications of this?

For one thing, you want to make sure that you have eight or nine, but preferably something closer to eleven infect creatures for your deck. If you only have six or seven infect creatures you won't be winning many of your games with infect (well, unless one of those creatures is Skithiryx, the Blight Dragon).

So the next time that you are looking at a Sealed pool, and there are only a handful of infect creatures you should actively look to do something else.

If you are drafting and you've only picked up three or four creatures with infect by the time you get through pack two, then you should spend the rest of your draft trying to put together a more traditional deck, if that's at all a possibility.

But if your Sealed pool has ten good infect creatures, or if you've picked up four good infectors by the end of your first pack, then you will be well on your way to poisoning a number of helpless opponents to death.

How to Win with Infect

There's a huge difference between controlling and aggressive infect strategies. With controlling infect decks, you look to gradually attrition your opponent out with removal and profitable trades until, eventually, you poison them to death through proliferate. If not, then with a big Untamed Might, or simply by having one to two more creatures that have managed to survive the bloody game that the two of you have struggled through for so many turns.

The best infect decks, like the one that Juza used to win Grand Prix–Bochum, have the capability to quickly win games where the opponent stumbles, and take over longer games even in the face of an opponent who has put together a perfect curve.

They do this through an abundance of good infect creatures, some good removal, and some good proliferate cards such as Contagion Clasp and Throne of Geth. The attrition path is made even more attractive when you are able to add cards such as Trigon of Infestation and Trigon of Corruption to your deck. (If you've ever played with or against a Trigon of Infestation plus a Contagion Clasp then you already know exactly what I'm talking about.)

Whether you go with a more aggressive, or a more controlling infect deck, it's important to keep your curve as low as possible. You don't want to get blown out by your opponents quick draw and you always want to maximize your ability to steal some quick wins if your opponent gets off to a slow start. 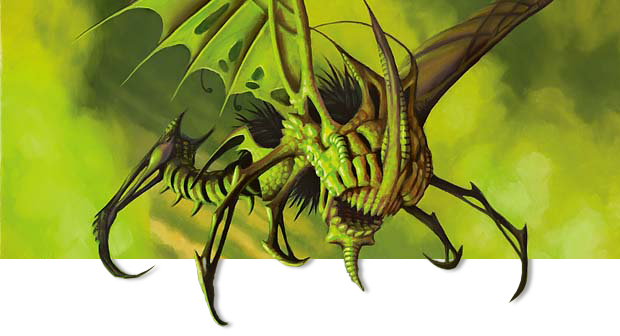 The first time I saw Plague Stinger at the Prerelease, I wasn't very impressed. Then someone played a Plague Stinger against me on turn two and I realized just how much trouble I was already in.

A couple of turns, a surprise hit from a Blackcleave Goblin, and an Untamed Might later and I was as dead as a doorknob.

Plague Stinger's ability to immediately impact the game, to fly over your opponent's defenses and deliver that first poison counter (which can then be proliferated again and again) and often many more after that makes it an excellent addition to any infect deck that is worthy of some very early picks. In fact, I know a lot of people who have Plague Stinger as their number one non-rare infect creature—over even Cystbearer, Necropede, and Tangle Angler.

While they aren't quite as impressive as the flyer, Necropede and Ichorclaw Myr are similarly valuable as they allow you to get the game started right and are often able to deliver poison counter after poison counter even if the opponent has a fine draw.

Vector Asp, on the other hand, is not a very good addition to infect decks of any sort.

The problem with Vector Asp is that it doesn't actually contribute to the majority of good, average, or bad draws.

It's very rare to find a situation beyond about turn two where you will be able to get in uncontested attacks with your Vector Asp and have the mana to activate it.

But even if your Vector Asp is able to make it through to your opponent without being blocked, If you have a good draw, you won't want to waste time activating your Vector Asp as you will likely have better spells to play.

And if you have a bad draw, a 1/1 creature that you need to spend mana on on a turn-by-turn basis to even have a chance to deal poison counters to your opponent won't really do much to help you.

Normally I'm not that big of a fan of pick orders as there are so many exceptions to every rule. 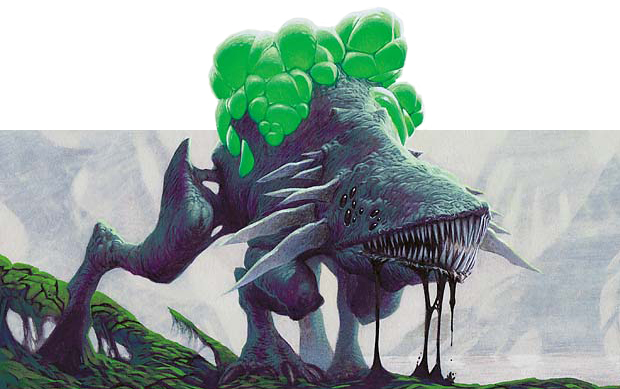 So while I have no problem comparing two cards of wildly different power levels like the extremely menacing Cystbearer to the marginal, but still playable, Sylvok Lifestaff I wouldn't want to directly compare, say, Instill Infection to Contagious Nim even within the context of infect decks as they are close enough in value that I could easily see myself taking either one of them depending on the condition of my deck.

But for a deck like infect, where you are pretty much trying to do the same thing every time, I think it is very useful to have a sense of where the infect creatures stack up against one another.

Fortunately for us, in an interview with Tim Willoughby at Grand Prix–Bochum, Pro Tour–Honolulu Champion, and infect afficianado Kazuya Mitamura was nice enough to share his pick order for infect creatures (leaving out Putrefax apparently by accident and Vector Asp on purpose). 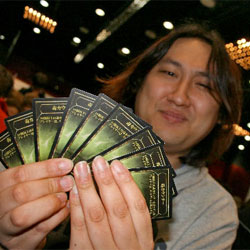 I was very surprised to see Tangle Angler that high on Mitamura's list. While I always thought of it as a high pick in infect decks, before seeing Mitamura's list I would never have thought of taking it before Cystbearer or Plague Stinger. 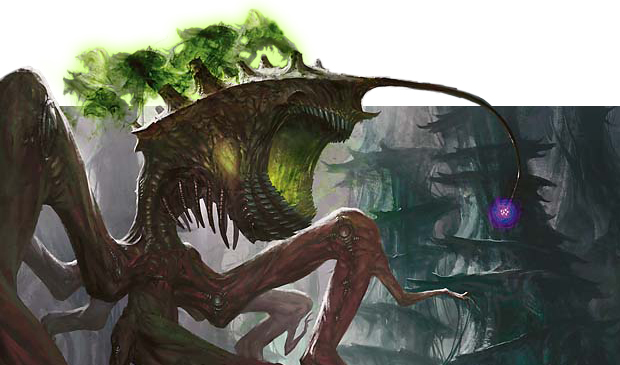 But, the more that I think about it, the more that I think that Mitamura might be right about the poisonous 1/5—Tangle Angler can do more on its own than most of the cards in the set. It can singlehandedly pick away at your opponent's little creatures, or it can clear the path for the rest of your infectors to poison your helpless opponent to death.

Throw a Darksteel Axe, on it and all of a sudden you get to put some serious hurt on even your opponent's largest creatures. Put an Infiltration Lens on it and you will draw a disgusting amount of cards while simultaneously eating away at your opponent's team. 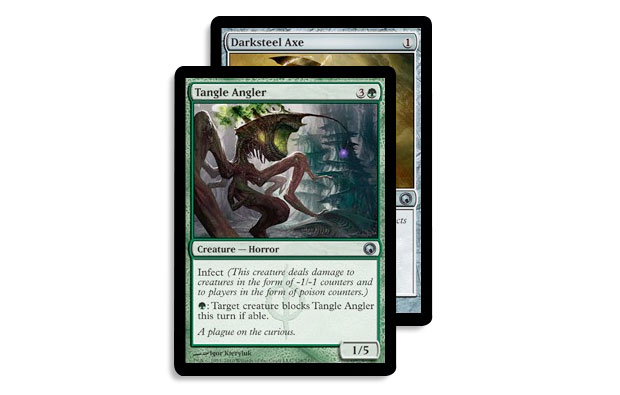 While Mitamura's list is certainly useful (I know that it's improved the way that I think about drafting infect), don't feel like you need to take it as gospel. Maybe you have Plague Stinger as your number one non-rare infect creature because you like to draft more aggressive infect decks, or maybe you have Corpse Cur a little bit higher than Mitamura does because you like your decks to be more controlling. If that's the case, and it's working for you, then feel free to keep doing what you're doing. So long as you understand why Mitamura would have his list like this you shouldn't feel bad about doing things a bit differently.

But even if you do adopt Mitamura's valuations exactly (or if you've already had a similar order that you've been working with), depending on what you've drafted so far, and what your curve requirements are the way that you value your infect creatures should certainly change. If you already have a Tangle Angler and three Corpse Curs and you have the choice between a second Tangle Angler or an Ichor Rats, then it will probably be right to take the less impressive Ichor Rats to help smooth out your deck.