Putting the How in How Many

Posted in Limited Information on December 8, 2009

f you are playing in the Top 8 of an event, or in a Magic Online queue, then there are always going to be eight players in your draft. But not all drafts have exactly eight players.

If thirteen players show up to your local Tuesday night draft, then your store probably isn't going to tell five people that they can't draft. Instead, you are probably going to have a six-person pod and a seven-person pod.

While being in a seven-person pod or a nine-person pod won't be a dramatically different drafting experience from the one you would have had with eight players, you will still have slightly different things to consider when you look at your packs.

However, if you are drafting in a five- or a ten-player pod, some of your strategic decisions will be dramatically different than they would have been if you had been in an eight-person pod.

So how should your draft strategies change if there are more or fewer than eight players in your draft?

What Am I Getting Back?

Let's start off with the most obvious thing to think about. What cards can you plan on getting back?

When you're playing in an eight-person draft and you open up a pack that's chock-full of playables, you can take a mental note of some of the less powerful cards in the pack that you will probably get a second peek at. Depending on what cards are missing when that pack comes back, you might be able to get a pretty good picture of what is available or what is being drafted heavily at your table.

For example, if the pack had four playable black cards when you passed it and none when it came back to you, then there are probably a good number of drafters at your table in black. If there was one really good blue card in the pack when you passed it and it made its way all the way back to you, then blue is probably being criminally underdrafted.

In a nine-plus-person draft, it becomes more difficult to learn anything from seeing what you get back out of a pack. Unless there are a ton of playable cards in your pack, then you probably won't be seeing anything of note the second time the pack comes around. And even if you do, there are so many players in the draft that it will be quite difficult to get an accurate read on the table from seeing one notable card that made its way back to you. Not only that, but even if you are able to learn something of substance about the table, that knowledge will pale in comparison with whatever knowledge you can glean about your immediate neighbors in a large draft.

However, in a smaller draft what comes back to you is of the upmost importance. If you are in a four-person draft, what you take first will be largely influenced by what cards you think you will see when the pack gets back to you.

In an eight-person draft you might shy away from a card first pick, first pack if there are multiple good cards of that color in the pack, but in a four-person draft the fact that one of those cards will likely come back to you could actually act as a strong incentive for you to take a card.

In fact, there are many times in a four-person when it would be correct to take the second or third best card in the back if that meant that you would be likely to get another good card of the same color the next time the pack comes around to you.

When there are six players in your draft, you should be somewhat concerned about what cards might come back to you, but you shouldn't be too concerned. In a six-person draft you should (generally) think of what cards could table as a tiebreaker that you could turn to, rather than as a determining factor.

In general, decks tend to get weaker the fewer players are in the draft, with the average strength probably capping out somewhere around nine or ten players.

In drafts with very few players (five or fewer), decks tend to become noticeably weaker and slower than they would be in a draft with eight players. There simply aren't enough packs opened for people to be able to regularly construct the high-powered decks that you become accustomed to in eight-player drafts.

This means that slower, game-breaking cards go up in value as you are likely to run into a lot more stalled out games.

If you can put together a high-powered aggressive deck, then more power to you, as it's unlikely that your opponents will be able to keep up with your blazing fast starts. But if you invest a bunch of picks into trying to put together that hyper-aggressive deck and it doesn't come through, then you might find yourself in quite a bit of trouble when it comes time to throw down against decks that have been specifically constructed to perform well in the mid to late game.

Because small drafts tend to produce slower decks, you should be more willing to dip into a third color if that means you can raise the power level of your deck by a significant margin.

In drafts with nine or more people, you shouldn't worry about the decks being much faster than they would be if you had the ideal eight. But that doesn't mean there aren't important nuances to consider in a larger draft. (More on this in a bit.)

What Gets Better, What Gets Worse?

If you are looking to draft a deck that takes advantage of having large quantities of cards that are of little value outside of the deck that you are drafting, then you are going to be hard pressed to put your deck together in a small draft. If you were trying to put together a mill deck in a five-person draft, you're going to have a hard time unless the perfect set of packs get opened.

So while, say, a mono-red deck can be an extremely powerful force in an eight-person draft, if there are only five people at your table you're going to have a lot of trouble getting together 22 playable red cards no matter how hard you try. By the same token, the smaller your draft, the weaker Allies become. Fewer chances to open Allies means that you probably aren't going to be making your Oran-Rief Survivalists huge anytime soon.

But if you're in a really big draft (nine plus players), you're going to have some of the best opportunities of your life to draft a really gimmicky deck. 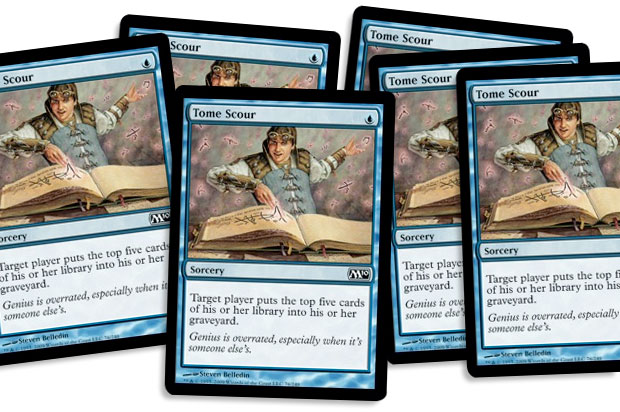 In a ten-person Magic 2010 draft, you would be in an excellent position to draft a Tome Scour mill deck. Heck, if I were doing a twelve-person M10 draft, I would probably first-pick a Megrim, confident in my ability to pick up another Megrim (or two) allowing me to kill my opponents with Burning Inquiries.

If you are in a very large draft, be on the lookout for wacky things. You could very well be able to pull them off.

In an eight-plus-person draft I rarely hate-draft, as the costs typically far outweigh the benefits. In smaller drafts, however, you do have a sizable effect over the quality of your opponents' decks.

Let's take, for example, the most extreme case: a heads-up, two-person draft. Literally every pick you make robs your opponent of an option. If you can get more value out of cutting a card from your opponent than you would from taking a card for your deck, then you should take that card away.

A three-person draft isn't quite as extreme, but you will still get significant value out of taking cards away from your opponents.

Once you get up to four people, you don't want to be aggressively hate-drafting cards from your opponents, but you will still often want to hate-draft bombs because you know that you will have to face them at some point during the draft.

However, in a four-plus-person draft, you shouldn't hate even a bomb rare if you have to give up a premium card to do so. If it's pack 2 and you have a choice between an Emeria Angel and a Hideous End for your blue-black deck, then you should almost certainly take the Hideous End.

Remember, you'll get to play with the card for your deck in three (or more) matches, whereas you will only play against the card that you passed in one. In a larger draft, you might not even face that card, so the cost that you pay for passing things goes down even further.

Keeping an Eye on Sideboard Cards

Let's say you're in a five-player draft and you pass the player to your left three Journey to Nowheres. Now you really want to pick up a Relic Crush or two, whereas in an eight-player draft you probably wouldn't have paid much attention to the card unless you had a chance to pick it up late. In fact, in that small draft you might even choose to main-deck the clunky five-mana utility spell if you've also passed some Equipment, quests, Auras, and/or Stonework Pumas.

Similarly, if you notice that there are a bunch of 1-toughness ground creatures going around, those normally undesirable Seismic Shudders suddenly become all-stars.

Because you have an immense amount of knowledge about the decks that your opponents are drafting in a small draft, you will be able to hand-craft your deck to maximize your chances against the specific card pool that you are dealing with.

Didn't see any bounce spells or many removal spells in the draft? Suddenly those creature enchantments become pretty attractive. Did it seem like most of the people in your draft were going to be playing three colors? Well, your opponents should get ready to Spreading Seas.

Heck, you might even want to pick up a Trapfinder's Trick if you noticed that a bunch of Pitfall Traps and Whiplash Traps went to the player to your left. And if you passed a couple of Hedron Crabs you're going to want pick up that Quest for Ancient Secrets. 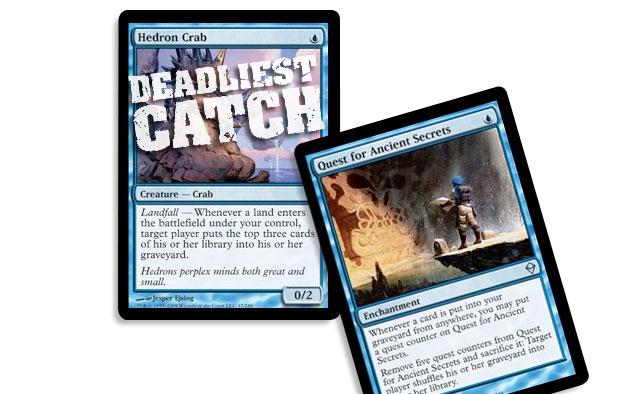 Remember, cards that are good in the abstract are still going to be good no matter how many players are in the draft. Just pay attention to whether you are going to be battling against the known or the unknown and you'll do fine.

Posted in Limited Information on December 8, 2009