Posted in Limited Information on January 6, 2009

t's the first pack of the draft. You open up a Cruel Ultimatum and nothing else that compares to the seven-mana game breaker, so you take it. Now it's going to take some serious convincing for you to switch out of Grixis.

New draft. You first-picked a Branching Bolt, and followed it up with a Rhox Charger, a Magma Spray, a Carrion Thrash, a Rockslide Elemental, a Blister Beetle, a Blightning, a Jund Panorama, another Blightning, a Naya Obelisk, and some other less notable cards.

Then you open up a Battlegrace Angel in pack two, and suddenly your Jund deck turns into a Naya deck.

Akrasan Squire and Wild Nacatl are the only one-drop creatures in Shards of Alara that I regularly want to play in my main deck. Sure, there are times when I might sideboard in a Goblin Mountaineer or times when I might start an Angel's Herald or a Dragon's Herald to be able to search up their beastly mythic rare friends, but those situations are rare to say the least. Speaking of rare, Ranger of Eos can also fetch up non-one-drop one-mana creature Feral Hydra if you're lucky enough to have both rares in your deck.

The way that I look at it, there are about eight different zones that Ranger of Eos can be in, depending on what stage in the draft you are and how many Akrasan Squire / Wild Nacatl you've drafted so far.

1) This is great. If you have two Wild Nacatl and an Akrasan Squire in your Naya deck, then you've got an easy first pick on your hands.

2) This is very good. If you have exactly two Wild Nacatl / Akrasan Squire in your Bant deck then Ranger of Eos is still very first-pickable, but I could understand passing on it if it was competing with something special.

3) This is good, and it might become great. If it's pack 2 and you have a single Wild Nacatl in your Naya deck, then I'd be quite willing to first pick it.

4) This is good, but it probably won't be great. If it's pack 3 and you have a Wild Nacatl to fetch up in your Naya deck, or two Akrasan Squire to fetch up in your Esper deck, then I'd be willing to take it very early, but I wouldn't want to first-pick it.

5) This might become great. Early in pack 1, you have no idea how good the Ranger will end up being. If there's nothing else remarkable in the pack I wouldn't be afraid to first-pick a Ranger of Eos because of its enormous upside, but I'd also accept that there is a reasonable chance that it will end up in my sideboard.

6) This is OK, but it probably won't be great. It's pack 3 and you have a single searchable creature. I'd be willing to pick the Ranger up somewhere during the middle of the pack.

7) This is a four-mana 3/2 that I hope, hope, hope will become great. It's pack 2 and you don't have any targets. I used to first-pick Ranger of Eos in pack 2 if I was playing at least green and white, but now I don't want to pick it up before pick 4 or 5 if I don't have something to fetch.

8) This is a four-mana 3/2 that might become OK. It's early in pack 3 and you don't have any targets yet. Odds are, you probably aren't going to be taking the Ranger unless there is literally nothing else in the pack for you.

When you see a card that ranges in value as much as Ranger of Eos does, then you want to be able to immediately determine its value, or its average potential value. If you can do this, then you are going to drastically cut down on your post-draft regrets.

While Ranger of Eos might cause me to make some dramatically different picks such as Akrasan Squire over Sigiled Paladin, Death Baron will only cause me to make subtle adjustments to the way I draft and build my deck. If I have Death Baron I might take a Dregscape Zombie over a Blister Beetle, or a Dreg Reaver over a Volcanic Submersion, or a Skeletal Kathari over a Welkin Guide, etc.

I've yet to encounter a situation where I would take Death Baron earlier than around fourth or fifth, but I'm always ready to pounce if I see a Death Baron that I can put to good use.

I'm not going to do another rundown of all the different ways that Where Ancients Tread can be evaluated like I did with Ranger of Eos (one rundown is probably enough per article), but I am going to let you know that I have taken Where Ancients Tread first pick, first pack more than once, and I'm yet to be disappointed.

While people might fight over Rakeclaw Gargantuan, Mosstodon, and Jungle Weaver a bit, you can get practically every Incurable Ogre in a draft without too much effort.

If you put your mind to it, it's not difficult to get a deck with six or seven 5-power creatures. If you have Where Ancient Tread when that happens, your opponents are going to be in for a world of hurt. 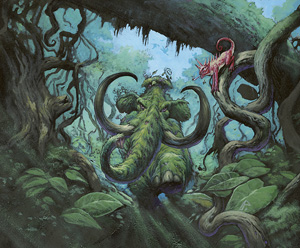 Where does a 5-power elephant tread? Wherever he wants to!

Don't be afraid to draft Mayael the Anima, but don't waste an early pick on it unless you know for a fact that it's going to be very good. It just doesn't have enough upside to make it worth the risk.

In my opinion, Minion Reflector is one of the most fascinating cards in the set.

Minion Reflector is at its best in unearth heavy decks. If the game goes long and you have a Minion Reflector in your unearth deck, then you are probably going to win. It can be tough to stand up to a Corpse Connoisseur on its own in the late game, but if it's doing double double quadruple duty, ouch.

I wouldn't want to take Minion Reflector early in pack 1 because it is only good in very specific decks, but I'm more than happy to pick it up with one of my first few picks in subsequent packs if I know that I have a deck that can properly support it.

I'll admit that I'm yet to actually play an Ooze Garden, but I have dreamed about riding it to tremendous success. Ooze Garden would make a home in an exalted deck or a deck with a lot of unearth. In fact, Ooze Garden would combo pretty well with the aforementioned Minion Reflector.

Actually, while I'm on the topic of Soul's Might, I'd like to mention that there are a number of corner case situations where it is appropriate to board in the five-mana creature enhancer. The most clean-cut example that comes to mind is if you're playing an exalted deck against your opponent's straight red-green beatdown deck. One turn your board consists of an 0/4 Guardians of Akrasa and a 2/4 Waveskimmer Aven. The next turn you have a 6/8 flier that can attack for 8.

I know I've mentioned this before, but I've struggled to figure out how to evaluate Goblin Assault. I know that it's good if you have a lot of removal, or your deck is lightning fast, or your deck has multiple Hissing Iguanar / Algae Gharial, or your opponent's deck is very slow.

But I don't think Goblin Assault is actually that good. I've only played it a couple of times and it was pretty unremarkable every time, and I've never lost because of it. I'm not saying don't play Goblin Assault, but don't expect it to be amazing unless you have the perfect deck to complement it.

Always keep an eye peeled for eccentric rares and uncommons, who knows when you'll be able to pull off something truly extraordinary like this?

Sorry, but I have to brag about something that happened in a fun format the other day.

Many of you are probably already familiar with DC10 (though you might know it by any number of different names, such as Infinite Mana Magic or One Stack). In DC10, you grab a stack of cards and shuffle them up. You and your opponent start the game with no cards in hand, each of you have infinite mana, and you both draw off of the same stack.

At the end of each game, the winner takes all of the cards that were played that game and adds them to his victory pile. If a player concedes, their opponent also adds the top card of the library to their victory pile as a concession tax. Once you've played through the entire stack, the player with more cards in their victory pile wins the match.

There are a number of other rules that you can incorporate, such as you can only use activated abilities three times in a turn (to prevent Firebreathing one shots), players only have two mana of each color, players can't tutor...

Anyway, I was playing DC10 in between rounds of a draft against my friend Julian. We were having a pretty close game until I played Lich's Mirror. Julian thought about it for a second, and then immediately conceded.

As weak as Lich's Mirror is in regular Limited, it's one of the most absurd cards imaginable in DC10. Normally, losing all of your permanents, most notably your lands, is a pretty bad thing, but when you have infinite mana and your only limiting factor is cards and life, then Lich's Mirror turns "losing" into blowout victories.

You open up your first pack in Shards of Alara draft, and it contains:

Posted in Limited Information on January 6, 2009