ooster drafts can be very daunting for experienced and inexperienced Magic players alike. I've seen many players, particularly players who aren't very familiar with a set yet, get overwhelmed while they're drafting and begin taking cards seemingly at random rather than taking a little bit of time to critically evaluate their choices.

Does this sound like something that happens to you? 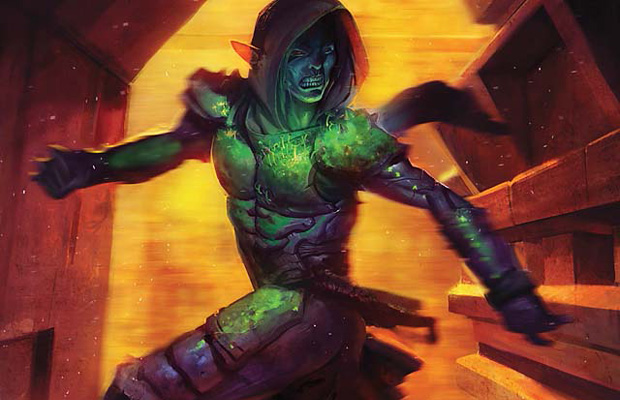 As long as you make sure the cards that you draft, and then ultimately put in your deck, are being selected for a (preferably good) reason, then at the very least you will be able to learn a lot from the experience.

Once you're familiar with a draft format you're going to be able to quickly rifle through every pack and reduce your choices down to one of just a couple of options without needing to read every card. And if you just need to choose between two or three cards, you should have plenty of time to make a decision.

However, until you personally feel comfortable drafting a set you may need to figure out some shortcuts that will allow you to remain levelheaded, and able to think critically, while the draft is taking place.

One shortcut I still use whenever a set is brand-new (and I'm still trying to learn what the cards literally do as well as how good they are) is to hone in on two colors early and just stick with them throughout the entirety of the draft.

Sure, this shortcut will probably lead you to miss out on some good opportunities that a player who has already drafted the set twenty times could have found, but if you're able to recognize your own limitations with a set, and give yourself a little bit of time to learn what you're doing without feeling overwhelmed, then pretty soon you'll be the player who (almost) always drafts a great deck.

In order to consistently succeed at Booster Draft you need to be able to:

Literally understand what the cards do

Until you know what most (or preferably all) of the cards in a set do, you're inevitably going to be at a disadvantage. Fortunately, the only thing you need to do to make this disadvantage disappear is to play more Magic and/or to study the current Card Image Gallery.

Sacrifices will inevitably need to be made when you're playing Limited. If you're drafting Rakdos and you choose to prioritize the best three-mana creatures, like Dead Revelers and Splatter Thug, you run the risk of drafting a deck that doesn't have very many one- and two-mana creatures in it. And if you take a Frostburn Weird over a Teleportal because you need another good creature, you may very well end up in situations where you're cursing the fact that you just don't have any way to break through your opponent's defenses (possibly ignoring the fact that you never would have lived to see that game state occur had it not been for the impact of your Frostburn Weird).

However, as long as you can identify why (and when) a card should be good, you will be able to consistently make good (if not the very best) choices while you're drafting.

Cards that perform well in a variety of different situations tend to be very desirable.

Stab Wound, New Prahv Guildmage, Dreg Mangler, Annihilating Fire, and Arrest are all great cards that excel both early and late in the game. And while it might not be on quite the level of the aforementioned cards, Frostburn Weird also fits this bill very nicely because of its ability to stand up to creatures that cost as much as four or five mana AND act as a potent offensive threat when necessary.

However, you should be careful not to overvalue these cards too much when you're actually playing your games.

If you don't have any other way to stop your opponent's Rakdos Cackler for the foreseeable future it's perfectly all right to use an Annihilating Fire to kill it. If taking out your opponent's Rakdos Cackler is going to save you 6 (or more) life over the span of the game, and you have a way to eventually assert control, then that play can prove very fruitful for you.

Finishers like Teleportal, explicitly narrow answers like Sundering Growth, expensive threats like Chaos Imps or Horncaller's Chant,and heck... in extremely rare circumstances, even life gain cards such as Heroes' Reunion... all have the ability to do great things for you, but only under the right circumstances.

And if you clog your deck with too many situational cards, you're inevitably going to end up dying with a lot of spells in your hand.

When you're drafting, you should always make it a point to limit the number of situational cards in your deck—both to minimize the potential liability that comes along with playing cards that won't always do much (or anything) for you, and to maximize their effectiveness when they do become relevant.

So while Teleportal is obviously a very strong card, you probably don't want to play a deck with three Teleportals and two Blustersqualls lest you get blown out any time your opponent draws a couple of removal spells or you simply don't draw very many creatures (a very likely proposition when you're playing a deck with five cards that do little but clear a path for your creatures...).

And while Sundering Growth is a very strong sideboard option, artifacts and enchantments just aren't plentiful enough in Return to Ravnica Limited for you to justify spending an early pick, or a main deck slot, on this extremely situational answer.

Then we get to the expensive cards.

From one perspective, Explosive Impact is an incredibly versatile card that can be splashed in almost any deck. It can be used to kill almost any creature in the format (including many creatures that have been enchanted with Auras like Pursuit of Flight or Knightly Valor) AND it can be used as a finisher, dealing that last chunk of damage that you need to finish off your opponent.

But you can't just ignore a card's cost.

Regardless of their abstract quality, six and seven mana spells are inevitably narrow because of their prohibitive costs. Yes, Isperia, Supreme Judge is a game-dominating mythic rare that's tough to kill, makes attacking a nightmarish proposition for your foe, and is a fast clock all by itself.

But it still costs six mana.

The very fact that Isperia, Supreme Judge costs six mana should lead you to devalue (or completely ignore) Skyline Predators and other expensive spells since you can really only afford to play two, or maybe three, six+-mana cards in most decks. (There are, of course, exceptions to this rule, but most of them require you to be playing a deck with eighteen lands in a relatively slow format.)

Some cards, such as Ethereal Armor, combo very well with additional copies of themselves or with other similar cards. No, the first Ethereal Armor in your deck isn't going to do much—but each subsequent copy you get will make them all dramatically more effective. By a similar notion, the more token generators and populate cards you grab, the better each subsequent token generator and populate card you take will be.

Making sure your cards play well together tends to be a lot more important than making sure you have the best collection of abstractly powerful cards that you could possibly get your hands on.

So if you're drafting an aggressive Rakdos deck and you're consistently picking up cheap aggressive creatures, removal spells, and ways to punch through additional damage like Traitorous Instinct, then your deck is probably going to end up being pretty good. However, an extremely expensive (but nonetheless powerful) card like Utvara Hellkite is just going to be a distraction and a liability for you...

...but if you're drafting a control deck full of Axebane Guardians and other defenders, then Utvara Hellkite will become an extremely desirable finisher for you, while Traitorous Instinct should be pretty much unplayable since you'll be winning with big swings, not small chunks of damage.

Understanding what your deck needs

For starters, you need sixteen to eighteen lands of various colors so you can actually cast your spells in a timely manner. Then you need somewhere in the range of twelve to eighteen creatures so you can regularly establish a board presence and eventually kill your opponents. You need at least two-thirds of your spells to cost four or less. And you want to snag as much good removal as you possibly can so you can regularly deal with your opponent's best cards.

Beyond those rules of thumb, much of the information that is going to be relevant for you is deck- and/or format-specific. After all, simply knowing that the speed of Return to Ravnica booster drafts makes it difficult for players to draft dedicated control decks won't do much to help you once Gatecrash rolls in.

In order to learn more about what the decks of Return to Ravnica should prioritize, check out these articles:

Confidently (and strategically) decide when to commit to your colors

Once you know what all of the cards in the set do and which cards fit best in which decks, and you have a good sense of how all of the decks in the format work, you're going to have a ton of options at your disposal at pretty much all times...

But how, and when, do you choose?

That's a question that even the top players in the world constantly struggle with.

Two weeks ago, I laid out my Return to Ravnica Booster Draft Roadmap and, hopefully, that can be of some help to you.

But keep in mind that no matter how many drafts you do, there are always going to be more questions for you to ask.

And you're just going to get better and better at asking the right ones.