Posted in Limited Information on April 20, 2010

ast weekend I was in Montréal at the Spellkeeper Events Rise of the Eldrazi Prerelease. I want to give a special thanks to Mauro Bongiovanni who—in addition to running a great tournament—went out of his way to help make my trip to Canada a very pleasant one.

I enjoyed my brief trip to Canada (Schwartz's Deli is pretty fantastic even for someone who's lived near the famous Katz's for most of his life), and I had an awesome time at the Prerelease itself. Rise of the Eldrazi is shaping up to be a very fun set to play. The fact that games of Rise of the Eldrazi Limited are slower than what we've experienced in the last couple of years is definitely a breath of fresh air. 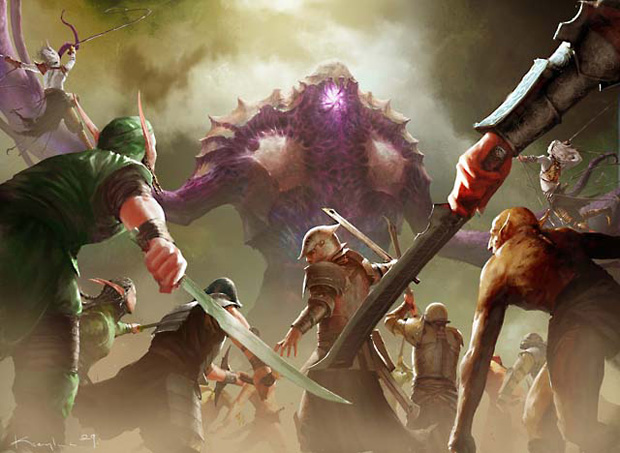 Aside from a little bit of more traditional game play with Magic 2010 this summer, I had almost forgotten what it was like to see decks that were based on stalling the ground and winning in the air, or midrange red-green decks, or attrition based blue-black decks, or any number of other, slower, classic strategies.

When I opened my pool, I knew that I wanted to play a classic archetype with a bit of a modern spin. Fortunately, my pool did not disappoint.

What Didn't Make the Cut

I was able to discard my green and my blue, save for a possible splash of my two Mnemonic Walls, pretty early on in the deck-building process. And while I briefly toyed with a white-black build focusing around my two Time of Heroes, I only had six level up creatures. That allowed me to dismiss this gimmicky build in favor of a more consistent and ultimately more powerful black-red deck.

The last cuts that I made from my deck were Pennon Blade, Pathrazer of Ulamog, my second Zof Shade, Suffer the Past, Inquisition of Kozilek, Perish the Thought and Lust for War. Pennon Blade seemed a bit too mana-intensive for my deck, as I anticipated that it would often only give +2+2, but I could see it being very impressive in a deck that's chock full of Eldrazi Spawn tokens. Similarly, Pathrazer of Ulamog seemed a bit too expensive for me to run in a deck without a bunch of Eldrazi Spawn to help get me to eleven mana.

The second Zof Shade was a tough cut, as I didn't have too many good finishers, and in hindsight I think that I should have made room for it, probably instead of my vanilla Lagac Lizard. Suffer the Past was another tough cut, but without a reliable way to punch in damage early, I worried that a Soul Feast type card wasn't going to do enough for me. Inquisition of Kozilek and Perish the Thought were also both pretty close to making the cut, but I didn't quite feel comfortable running any discard without knowing more about the format (though in hindsight, I think I should have run Perish the Thought to be able to deal with some gigantic Eldrazi creatures before they could annihilate me).

Lust for War almost seemed good enough, especially if there were going to be a ton of utility creatures like Kor Line-Slinger, as well as a bunch of leveling creatures that I would want to kill before they got huge. I eventually ran out of time to build my deck and decided to leave Lust for War in my sideboard. Over the course of the day I realized that it is definitely worth sideboarding in a lot of matchups, and it could even be a key card in some faster strategies.

During my first game of Rise of the Eldrazi Limited, I played against Etienne Carle. I won the roll and chose to draw first. I kept a fairly slow hand with a good amount of burn and some solid creatures. Etienne got things started off with a Hedron-Field Purists. At this point I was holding a Last Kiss and a Forked Bolt and I had every intention of using my two burn spells to get rid of his Human Cleric, if he gave me the chance. Unfortunately for me, Etienne did not give me that chance as he spent his fourth turn leveling up his Hedron-Field Purists. 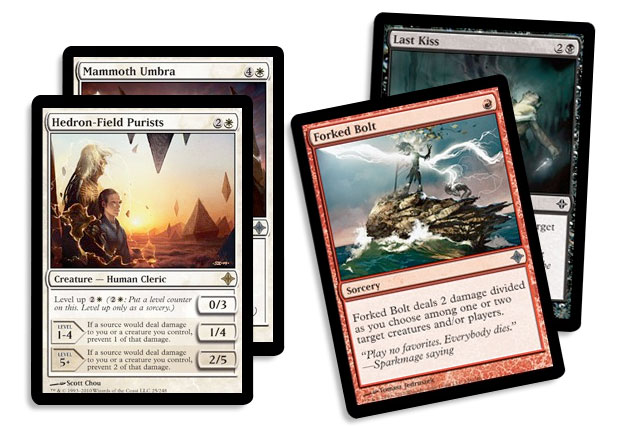 My hand was still pretty good at this point, even with his leveled-up Hedron-Field Purists minimizing the effectiveness of my burn spells (not to mention my creatures) so I figured I still had a good shot. When Etienne put a Mammoth Umbra on his 1/4 Hedron-Field Purists, I knew I was in trouble. Even if I drew a Doom Blade effect, such as Vendetta or Corpsehatch, I would still be unable to get my opponent's Hedron-Field Purists off the board.

I was fortunately able to draw an Akoum Boulderfoot, which I used to stave off my opponent's jumbo sized Hedron-Field Purists for a couple of turns. I drew some solid creatures, and it looked like I had a chance of getting back in the game ...

... until my opponent put an Eldrazi Conscription on his Mammoth Umbra–enchanted Hedron-Field Purists and attacked for 15.

Needless to say, I did not win that game.

In most other formats, my deck would have been great. I had a ton of removal, a good curve, some good finishers, a couple of bombs, good mana, you name it! But in the slower, finisher heavy Rise of the Eldrazi my deck didn't actually play as well as I thought it would.

Match-ups matter a lot for decks like this. My deck matched up pretty well against most of the powerful, fundamentally sound decks that I played against. However, I had a lot of trouble against opponents who were sporting what would in other formats be considered fundamentally unsound, top-heavy decks.

My games against faster decks generally went pretty well for me, as I was able to clog up the ground with my Ogre Sentry(s) and whatnot while I took my opponents apart with my rebound spells such as Staggershock.

My games against fairly streamlined decks went, well, fairly. I was able to dip into my abundant supply of removal spells to deal with my opponents' top creatures, putting me in a good position to win if my opponent stumbled or accidentally mismanaged his or her resources.

However, against slower, top-heavy Eldrazi decks, I got destroyed. I simply didn't have a good enough way to break through early to consistently punish my opponents for slow starts. My many 2-damage removal spells did little when my opponents were casting nothing but larger, more expensive creatures. And when the games got late, which they inevitably would, I simply didn't have enough big removal spells to take care of multiple large threats out of my opponents.

I will be sure to keep you posted as I develop a more complex understanding of the format, but my Limited experience with the set seemed to indicate to me that having a strong late game in Rise of the Eldrazi Limited is far more important than having a strong early game.

As long as you can put up a reasonable resistance early in the game, you should be able to survive the early onslaughts that your opponents will try to put together. If you have a good way to accelerate into your late game, then you should have a pretty special deck. But if you are simply able to survive until late in the game, and then take over with game-breaking spells and gigantic Eldrazi creatures, then you should be on the road to quite a few victories.

When I was at the Prerelease last weekend I noticed that there was a good deal of confusion about how the rebound mechanic works. To clear things up, let's consult the Rise of the Eldrazi FAQ.

* If a spell with rebound that you cast from your hand is countered for any reason (due to a spell like Cancel, or because all of its targets are illegal), the spell doesn't resolve and rebound has no effect. The spell is simply put into your graveyard. You won't get to cast it again next turn.

What this means for you is that if you go to Staggershock a Eldrazi Spawn token, your opponent can simply sacrifice the token, countering Staggershock and preventing rebound from ever happening. Similarly, if you have a way to prevent your opponent's rebound spell from successfully resolving the first time around, you're incentivized to do so, as it will stop your opponent from getting the second use of the spell. 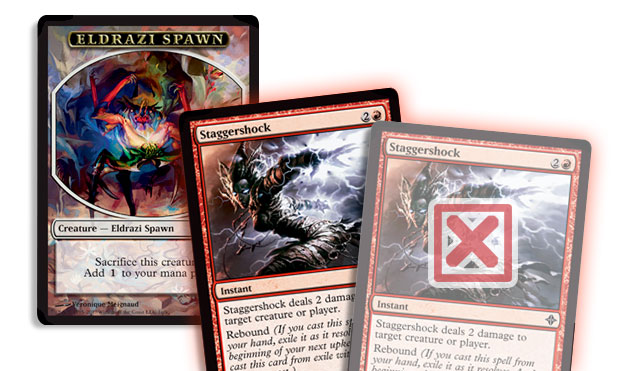 While this won't come up too often in Limited play, the fact that rebound spells don't actually wind up in the graveyard until they've resolved the second time (or if they've been countered) means that there's no opportunity to do something like Suffer the Past to prevent a spell from being rebounded.

* At the beginning of your upkeep, all delayed triggered abilities created by rebound effects trigger. You may handle them in any order. If you want to cast a card this way, you do so as part of the resolution of its delayed triggered ability. Timing restrictions based on the card's type (if it's a sorcery) are ignored. Other restrictions are not (such as the one from Rule of Law).

This means that if you have multiple spells rebounding on your turn, you get to choose the order in which you recast them.

* If you are unable to cast a card from exile this way (because there are no legal targets for it, for example), or you choose not to, nothing happens when the delayed triggered ability resolves. The card remains exiled for the rest of the game, and you won't get another chance to cast the card. The same is true if the ability is countered (due to Stifle, perhaps).

This means that your only opportunity to recast a spell for free with rebound is on your very next upkeep. If you don't cast it at that point, it will remain in exile for the rest of the game. You can't just let your Staggershock sit in limbo while you wait for your opponent to play another 2 toughness creature for you to kill.

* If you cast a card from exile this way, it will go to your graveyard when it resolves or is countered. It won't go back to exile.

This means that you will be able to regrow your rebound spells with Mnemonic Wall.

Please drop by the forums to post all of your Sealed pools, final deck lists, fun plays, tough decisions, cool travel stories, or anything else worth mentioning about your Magical Prerelease weekend. I'll be sure to take a closer look at some of the more interesting pools and/or game-play questions during the coming weeks.

Posted in Limited Information on April 20, 2010