imited decks require a certain number of core components and supporting cards in order to function properly. When you get a lot of good cards that work well together and fit along a nice, tidy curve, you are going to be in pretty good shape when it comes time to play your matches. 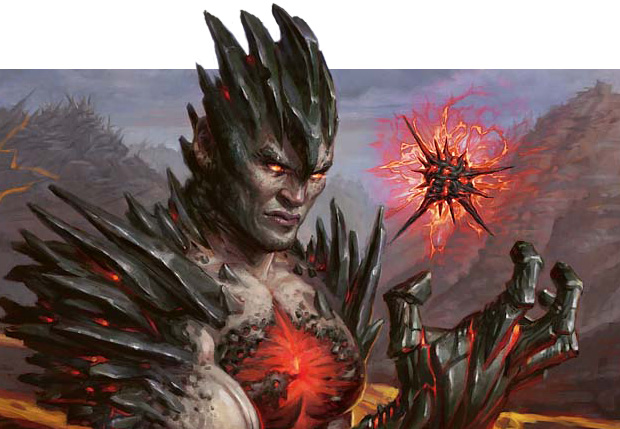 But even if you do have a really good deck, given that this is Limited, there are always going to be cards in your 40-card deck that you would love to be able to upgrade—cards that you really wish you could trade for less powerful but more synergistic cards. ("If only I had taken that off-colored Leaden Myr instead of [insert really good, but superfluous card here], my deck would be so much better.")

And, even if you are a really good drafter, your Limited deck won't always have forty cards that work really well together. Limited decks tend to have at least a few cards that can be considered filler, back up plans, would-be sideboard cards, and sub-themes. But if you keep your eyes and your mind open during the draft and the deck-building process, you can make sure that you get the most out of your deck even when it contains some cards that are not typically good matches for one another.

Sometimes, when you just don't get those cards that make a deck shine, it might feel like your deck is all filler. Other times, when you work really hard to build your deck around a couple of cards, and you end up with a lot of filler you are going to have your fair share of games where your draws just kind of crap out on you (an Embersmith makes a handful of Flight Spellbombs pretty excellent—take that Embersmith out of the picture and you are just spending a bunch of time to cycle through some cards).

But without those support cards—the "filler"—you won't be able to take advantage of many of the strongest cards, and strategies, that are available to you.

While Flight Spellbomb might not be all too impressive on its own, if you are trying to get metalcraft and you have an Embersmith, it can be pretty awesome for you.

Point of View (Know Your Role)

Sometimes the line is blurred as to exactly what category a card falls into. Depending on your vantage point at the time, an Iron Myr could easily be considered a core component of a deck, a supporting card, or a somewhat irrelevant filler card.

When you are nearing the end of pack two and you have a bunch of four-drops, but no mana acceleration, an Iron Myr is going to seem like a core component.

If you are building your sealed deck and you have a number of mana Myr to choose from—then they are going to seem like important supporting cards, but you probably aren't going to think of them as core components for your deck.

I find these distinctions to be the most interesting when you are still forming your deck's identity.

Depending on what kind of a deck you are drafting—and the specific set of cards that you end up with—different cards can fill very different roles. Because of this, your early (and even some of your late) picks can end up being used in a variety of different ways. 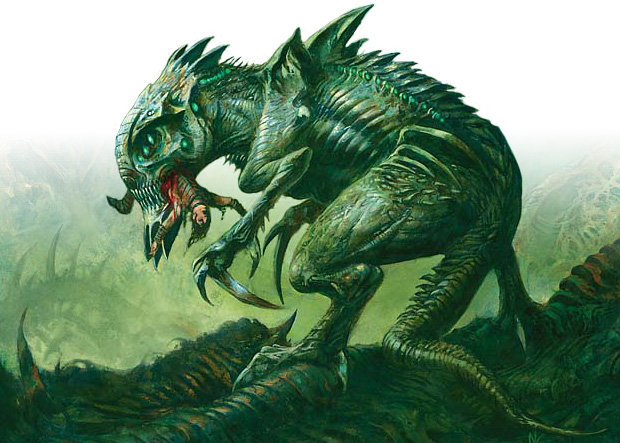 A Plague Stinger in an infect deck will be an awesome early, evasive threat that can really get your game off to the right start. But in the black-green good stuff deck (that is very happy to have Alpha Tyrranax) a Plague Stinger probably won't be worth including in the main deck, especially if it's the only infect creature in the deck. And if it does make the cut, it will probably be used for its defensive prowess in the majority of games, only occasionally contributing to wins with the aid of proliferate, Trigon of Rage, Untamed Might, or a well-timed Tainted Strike on an unblocked Alpha Tyrranax. 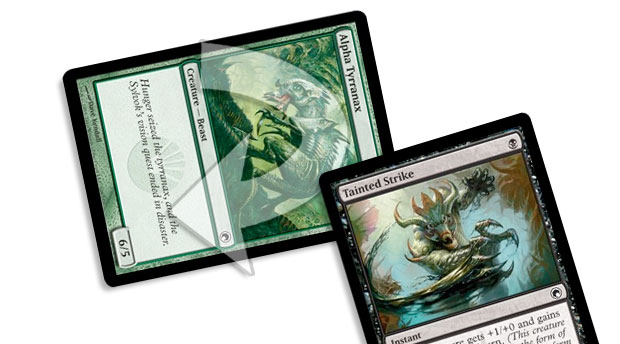 But even if a card is being used for somewhat different purposes, in two different decks, does not necessarily mean it is serving different roles in those two decks.

For example: a Contagion Clasp in a metalcraft deck—just like a Contagion Clasp in an infect deck—has an immediate effect by killing, or at the very least shrinking, one of your opponent's key creatures. Plus, it will continue to help the deck towards its primary goal either by proliferating more -1/-1 counters onto opposing creatures (and more poison counters on to your opponent in infect decks), or by staying on the board and counting towards metalcraft (while simultaneously allowing you to recharge your Tumble Magnets and whatnot). 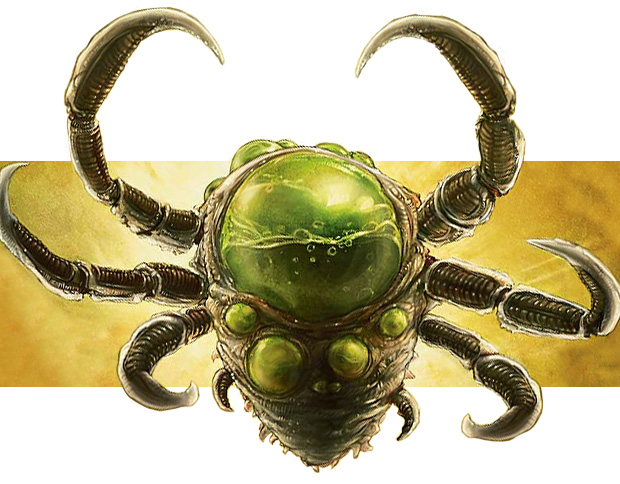 So if you take a first-pick Contagion Clasp, you are going to get a good piece of removal that will also provide some key support as the game goes on—at least as long as you can take advantage of proliferate and/or metalcraft. If your deck doesn't care about how many artifacts you control, or about counters, then you are just going to have a decent removal spell and nothing more.

If you simply took the card that is the best, in the abstract, out of every pack—you would end up with a terribly unfocused deck that would have a lot of trouble winning.

Now, even if you draft the no-theme theme (where you simply load your deck up on good removal and creatures), you still have to keep a close eye on your mana curve, and you still need to make sure you end up with a good number of creatures (as a rule of thumb, you usually want somewhere around fifteen creatures, but it could easily be as low as thirteen, or as high as nineteen, without anything being abnormal). So, while you might just be taking the "best card" out of every pack, you will still be drafting a very real deck. 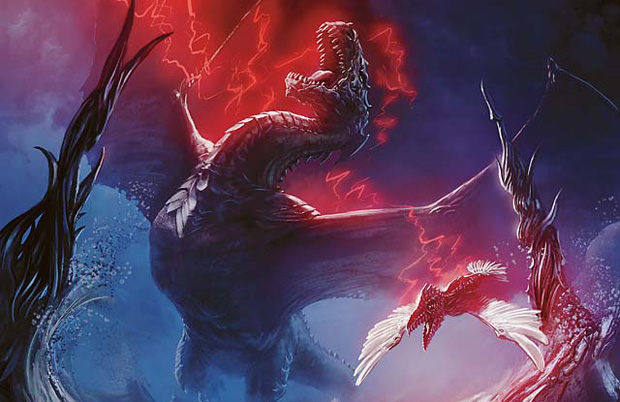 Whenever you open up a pack that has an amazing bomb like Carnifex Demon, or a great piece of removal like Arc Trail, or a really strong card that fits perfectly into a bunch of different decks like a Contagion Clasp or a Darksteel Axe and nothing else of note, you are going to have a pretty easy pick on your hands.

So, while it's true that you can take the "best card" with your first pick, (or even the first few picks), if you have to choose between an Instill Infection or an Ichor Rats with your fifth pick of the first pack and your only other infect card is a Plague Stinger—then you are going to have a tough pick on your hands.

Now in most instances, following this line of reasoning, the conclusion would be pretty clear. You would take the Instill Infection and never look back! But given that infect decks need to amass a critical number of infect creatures in order to function properly, this becomes a much more difficult pick.

If I had a reason to believe that infect would be open, or I wasn't too happy with my other, non-infect, cards, then I would go with the Ichor Rats. But if I felt like infect was being fought over, I would go for the Instill Infection without much hesitation.

At a certain point you are going to need to choose what type of a deck you are drafting. In a format like Scars of Mirrodin, where the best decks require a lot of on-theme cards (and the majority of on-theme cards tend to be lackluster in decks that don't look to take advantage of metalcraft or infect) this decision generally has to be made pretty early.

If you wait too long to make a choice, you can end up with something really messy. A hybrid infect/metalcraft deck will be incredibly vulnerable to, well, pretty much anything and probably won't allow you to walk away from your draft with very many wins.

And even if you are able to remain fairly focused, if you wait too long to make your choice you are likely going to end up with a lot of filler in your deck. 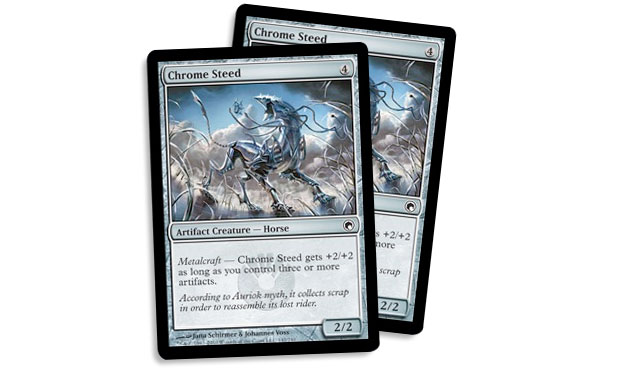 It's true that when you are drafting a metalcraft deck, there aren't too many cards that you absolutely need to have—and there are a lot of reasonable substitutes that can be made. But you are definitely going to feel the difference if you gave up on a couple of Chrome Steeds early on while trying to keep yourself flexible.

But even though there are plenty of things that can go wrong if you stave off making a commitment for too long, it is important to remain flexible at least long enough to see if something is particularly open. (There are few things worse than getting married to your first pick and then watching the rest of your draft fall apart as you try to build a deck around your it.) 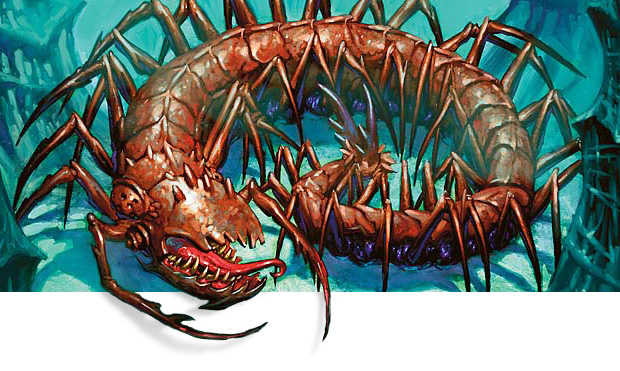 So, if I have the chance to take a Necropede early, I will typically jump on it—especially if I don't know what direction my deck is headed in yet. I will often take Necropede over abstractly better infect cards, but I will also take it over impressive metalcraft cards. Not only is Necropede very good in infect decks (obviously), but it's a more than welcome addition to metalcraft decks, or even theme-less decks, as it can provide some very good curve help.

If I open up a weak pack, I will have no problem first-picking a mana Myr. Regardless of what colors I end up playing, I'm almost certainly going to end up playing my mana Myr—so that mana Myr will leave me in an extremely flexible position as the draft progresses.

Even if that Necropede ends up being a filler card in my metalcraft deck, when I took it early it had the chance to be a core component in an infect deck.

And even if that Contagion Clasp winds up being a glorified Myr killer in my red-green beatdown deck, it would have been so much more had I gone into infect or metalcraft.

You want to make sure that your early picks have a lot of upside. If your early picks offer you both upside and a tremendous amount of flexibility, then you are going to be in a great position to take advantage of any opportunities that may come your way over the course of the draft.