The Rules Changes and You

Posted in Limited Information on July 7, 2009

esterday, the front page featured Tim Willoughby's Magic 2010 Prerelease Primer. Even if you have been to a bunch of tournaments before, I would recommend reading Tim's article. In addition to a general overview of the Prerelease experience, he approaches the rules changes from a very clear, fundamentally sound way, which is something that we can all benefit from.

While everything that he wrote about is very important, there are a lot of additional things that you, as a competitively minded person, will want to keep in mind when you're playing in the Prerelease.

This shouldn't make that much of a difference for you. 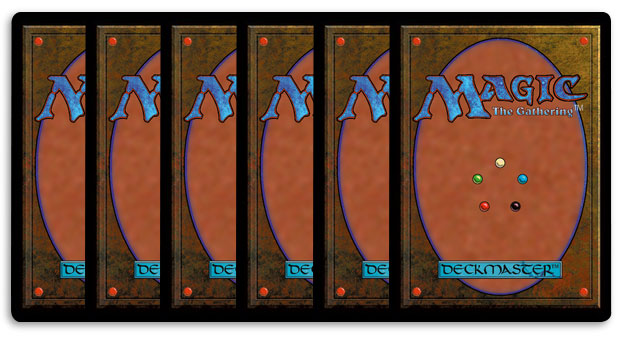 In other words, if anyone ever says "no" when it is their turn to decide if they want to mulligan or not, that's the last time they will be asked the question.

These are purely cosmetic changes should have no impact on your physical game play experience.

While this (admittedly minor) rules change is more likely to be noticed in Constructed, this could definitely have some corner-case implications in Limited.

One example that comes to mind is if your opponent uses an Icy Manipulator to tap your Mountain on your upkeep, you will no longer be able to float that mana into your draw step to see if you can use it on an instant that you draw (like Lightning Bolt). It doesn't come up much, but it can certainly matter when it does.

"The owner of a token (on the rare occasions the game needs to know who that is) is now the player under whose control it entered the battlefield rather than the player who controlled the effect that made the token." 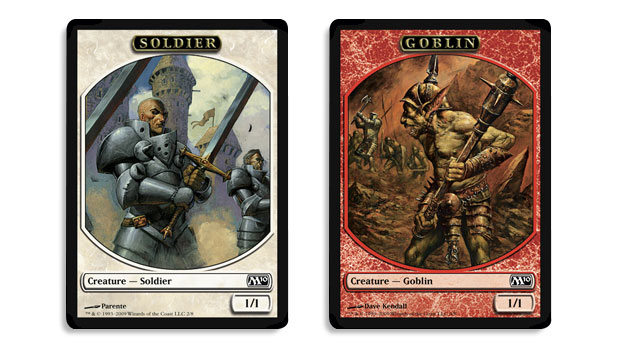 While I'm sure there are going to be corner cases where this is relevant, I can't think of a single time in my ten years of playing Limited where this would have mattered for me.

(We'll skip the changes to combat for now.)

"First, deathtouch is becoming a static ability rather than a triggered ability; it now destroys creatures at the same time lethal damage does. As a side effect, multiple instances of deathtouch will no longer be cumulative. Second, deathtouch allows a multi-blocked creature to split its damage however its controller chooses."

While the M10 deathtouch rules might appear somewhat complicated, they actually are not. 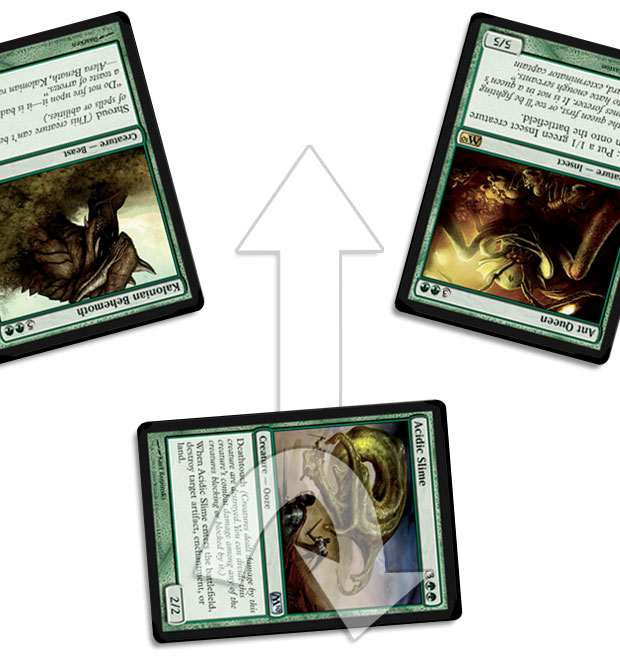 This shouldn't make too big of a difference on your game-play experience because now, just as before, it's really bad to multi-block a creature with deathtouch.

This is actually a very significant change. Sure, it won't come up very frequently, but when it does come up it will have a huge impact on your game.

My opponent declared his blockers, and I could already see myself sailing through the Finals and flying to play in my first Pro Tour.

Then he cast Awe Strike, the only card that could beat me in that situation, as he gained the life before he died from lethal damage.

The next week I played in another PTQ and was able to make it all the way to the Finals before losing to, you guessed it, another Awe Strike stopping me when I was attacking for what would have been lethal damage.

The fact that lifelink now gains life immediately should make combat just a little bit more interesting than it used to be, because that's one more variable that you need to keep in mind when you're mathing out your combats.

Unless you've been living under a rock for the last few weeks, you've likely already been through the five stages of grief since you heard about this change.

Denial: "This can't be happening."

Anger: "Why would they do this, it's not fair!"

Bargaining: "Well, if they just make a set with more good counterspells, then I won't care how combat damage works."

Depression: "I'm just not even going to play any more."

Acceptance: "I guess there's nothing that I can do to stop these changes, I better prepare for them."

While I was initially very hesitant about the rules changes, now that I've gotten a chance to play about a dozen drafts with the new rules, I can safely say that my game-play experience has not suffered in the slightest.

Sure, I had to adjust my card evaluations while drafting, but things honestly haven't felt that much different during actual game play. Magic is still Magic in every way that matters to me. Not being able to Unsummon my blocker after damage goes on the stack does not affect my game play experience in the slightest. It's just the way things are now.

However, there was one thing that worried me about the combat damage changes. My biggest concern about the new rules was that without being able to put damage on the stack, I would lose some of my ability to orchestrate plays. But that's not the case at all. I feel just as able to lure my opponent's into making plays as I used to be, and honestly that's where the real skill comes in.

Whenever you can set up a situation to play out the way that you want it to, and not the way your opponent wants, or expects it to play out, then you're playing some really good, strategically intricate Magic. Across the board, tricks require more thought than they used to in order to be used to maximum effect. And that's awesome. 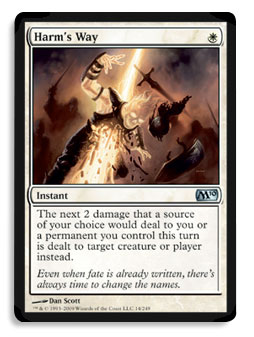 If anything, I find the game more interesting now, as I am constantly being asked new questions in what, thanks to my many years of experience playing Magic, had previously been fairly mechanical situations.

Not only is the game more interesting in many ways, but right now is one of the best opportunities you will ever have to rapidly improve as a Limited player.

If you're willing to put the time and mental energy into developing an advanced understanding of the game, you will get huge returns on your investment. Nobody knows how to draft this set yet, and nobody has a great understanding of how the rules changes will affect game play. So while most of the time when you put a lot of work into getting better at Magic, you will first have to catch up to where other people are before you start pulling ahead, right now any work you do will simply set you ahead of your competition.

If you can fit it into your schedule and budget, now is a truly great time to get better at Limited.

Why Pumping Toughness Is Better Different Than it Used to Be

Previously, if you had a 1/1 Soldier token and a 1/1 Goblin token blocking a 2/3 Elvish Warrior, your Kabuto Moth would only be able to save one of them.

Now it can save them both. It can also lead to both of them dying. Let's review why.

Your opponent orders Soldier first, Goblin second. You then activate your Kabuto Moth to give your Soldier +1/+2. If your opponent has nothing, then both of your creatures will live while your opponent's Elvish Warrior will die. 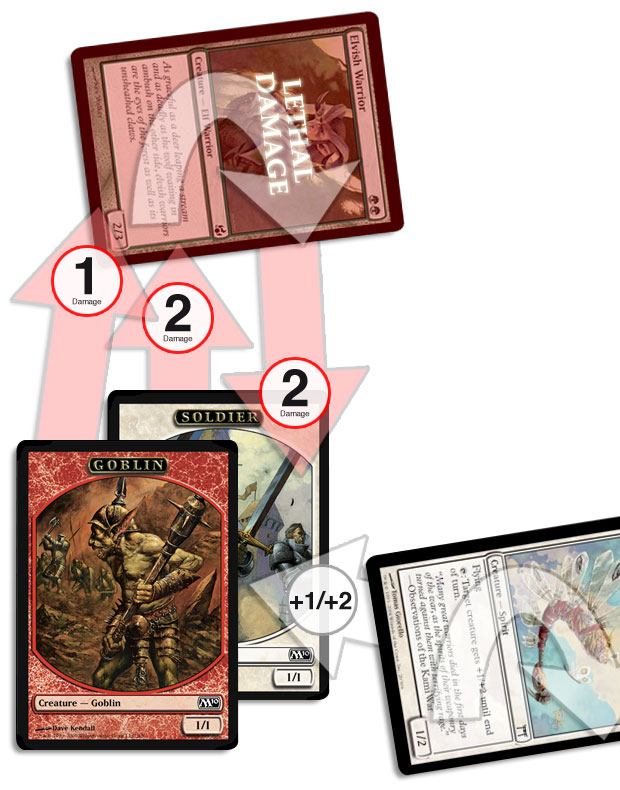 But if your opponent has a Lightning Bolt for your Soldier token, then both of your blocking creatures will die, while the Elvish Warrior will live.

I'm not sure if pumping toughness is strictly better now than it used to be when you could choose to pump a creature's toughness after damage was stacked, but it's definitely going to be better in a lot of situations.

The Comprehensive Rules weren't the only things to change; there were some changes to the tournament rules as well. You are now allowed to bring outside notes that you can consult between, but not during, games.

While I'm not sure how relevant this will be for Limited (it's without a doubt going to make your life a lot easier in Constructed), there are definitely going to be situations where you want to write down your extensive sideboard plan that has you turning your blue-black deck into a blue-red-green deck against opponents with a lot of fatty creatures, or into a blue-white deck against particularly fast opponents.

A Note about Multiple Blockers and Damage Prevention

Your opponent then casts Healing Salve (or similar) to prevent 3 damage to his Grizzly Bears. 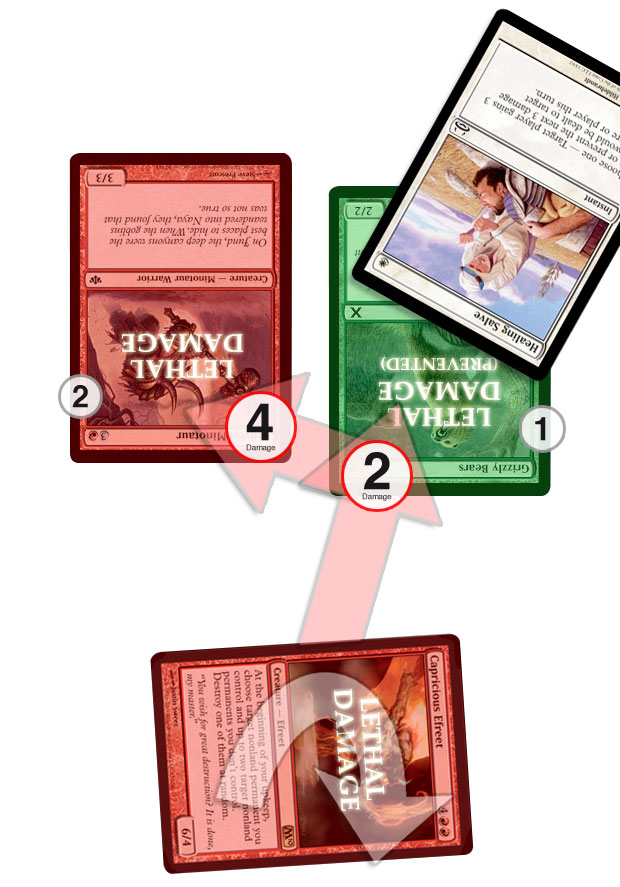 In this situation you don't need to deal the 5 damage that you would have to deal to kill that creature; you need only assign what would be lethal damage. In this case, that's 2 points of damage, allowing you to kill the more threatening Canyon Minotaur with the remaining 4 despite the way you ordered them.

Same thing with trample damage. Imagine your opponent is blocking your 4/2 with a 2/2, and he casts a Healing Salve to prevent 3 damage to his 2/2. You cast Colossal Might to make your creature an 8/4 trampler. You then only need to assign the 2 damage that would be lethal to your opponent's creature, leaving you free to bop your opponent on the head for 6 damage. 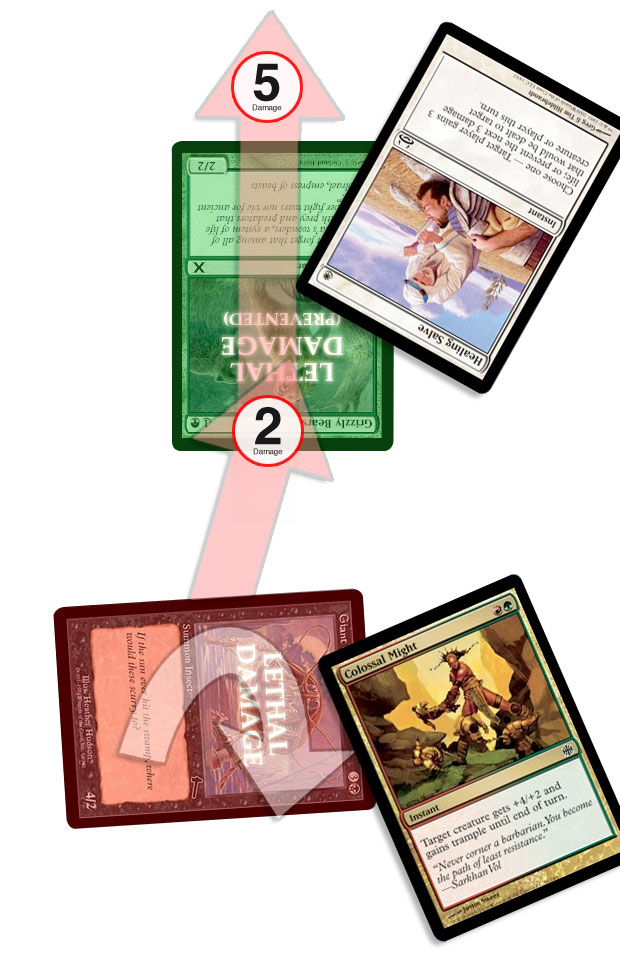 Ultimately, your Prerelease experience shouldn't change too much because of the new rules.

The biggest change for you won't be the rules, but the cards. 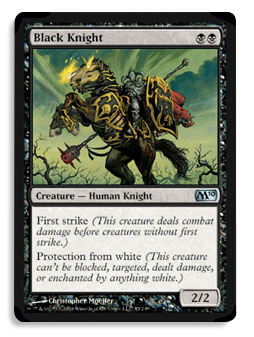 In other words, it's going to be about the fundamentals.

Have Fun at the Prerelease!

One big piece of non game play advice that I would like to offer is not to get mad or frustrated if your opponent doesn't understand the new rules as well as you do.

I have had the chance to play with the new rules a heck of a lot in casual drafting environments. And I still feel like I might slip up with the rules, simply because I've spent so many years playing the game under the previous rules.

There's no reason to sour someone else's experience just because he or she isn't 100% familiar with the dramatic changes that have taken place. Be patient, sort it out, and call a judge if there's a disagreement.

Oh, and most importantly, have some fun! I know I will.

Posted in Limited Information on July 7, 2009