Sealed in the Dark

his past weekend I played in a Dark Ascension Prerelease at Twenty Sided Store in Brooklyn and I had a blast. I got a yummy breakfast burrito while I was walking over to the tournament, opened up an interesting (and difficult-to-build) sealed deck, and played a bunch of really close (and interesting) games with the new cards.

I had a really good, low-key time this past weekend, but I was (and currently am) still starving for more Magic at the end of it. While this is in large part because Dark Ascension-Innistrad Limited seems like a particularly fun and interesting format, I can't help but realize that a single Sealed event isn't nearly enough to sate my Magic hunger during a Prerelease weekend. That's why I'm pledging to take things up a notch for the Avacyn Restored Prerelease this May.

Not too long ago, the start time for the Prerelease tournaments at each of the three main New York City gaming stores overlapped with one another, so I had to choose which store I wanted to go to. But now that Twenty Sided Store and Kings Games are running Prerelease flights on Friday at Midnight as well as Sunday, I won't have to pick just one store.

For the next Prerelease, I'm going to go for the New York Magic Triple Crown—playing in Prerelease tournaments at Twenty Sided Store and Kings Games in Brooklyn, and Jim Hanley's Universe in Midtown Manhattan—all in one weekend...

I hope I won't be the only person undertaking this gaming marathon!

Soon after I finished my breakfast burrito, I opened up the following Sealed Pool:

After sorting through my cards, and carefully reading the Dark Ascension cards to make sure I knew what they all did, I knew I wanted to play green as my main color—and that I was probably going to splash a third, a fourth, or maybe even a fifth color off of my Dawntreader Elk, Evolving Wilds, and Traveler's Amulet. 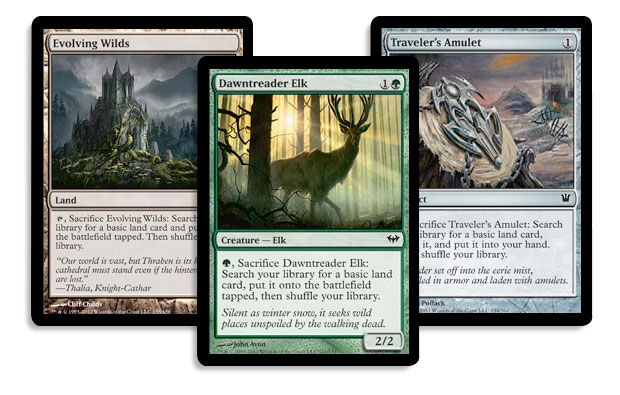 Next up, I needed to figure out what my second color was going to be. My black was pretty underwhelming, so that was the first color to leave consideration—and while my blue had a few cards I wanted to play (namely Stitched Drake, Griptide, and Bone to Ash)—it lacked the depth that either white or red offered.

I then laid out a base red-green deck (which wasn't as impressive as I thought it would be when I was first looking at my pool, so I checked to see what a base green-white deck would look like.

As soon as I started to put the deck together, I knew green-white was going to be the way to go. All I had to figure out next was which colors to splash...

Here's what I wound up playing:

When you're building a sealed deck, it can be quite difficult to figure out which combat tricks will have the biggest positive impact on your deck. 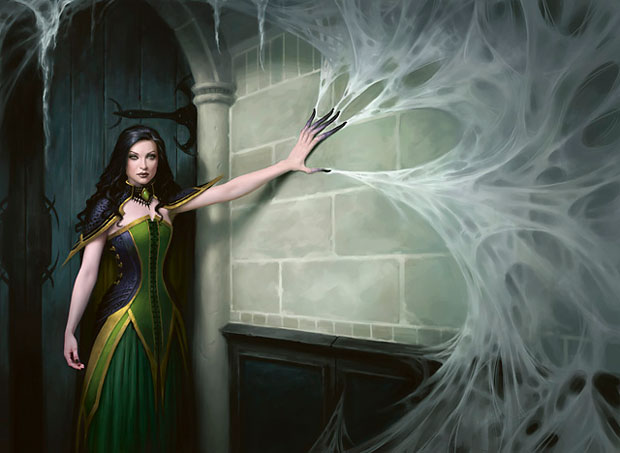 Do you want to play the cheapest tricks in your pool because you anticipate being able to leave up a little bit of mana on key turns?

Do you want to play cards that pump your entire team, like Break of Day, because you foresee yourself getting into some stalled-out board states where you will be able to generate a monumental advantage by pumping all of your creatures?

Or do you want to play tricks like Spidery Grasp, which are particularly good at allowing your relatively ineffective creatures to win in combat against your opponents' top threats? 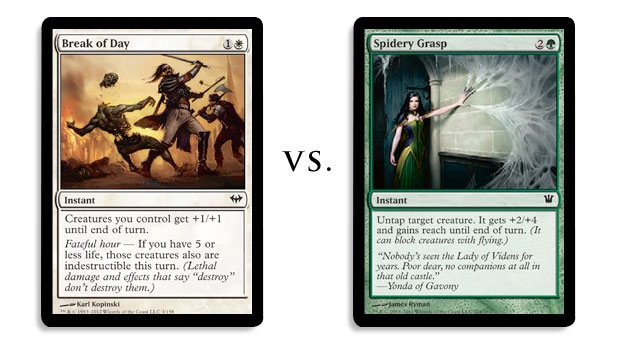 I decided to play with my Spidery Grasps because I didn't see myself getting into too many important battles between similarly sized creatures. My game-breaking creatures were huge, everything else I had was pretty small, and it seemed like I would be just as likely to have three mana left over as I would to have two in most spots (so the fact that Spidery Grasp was a little bit more expensive than some of the other tricks I didn't run wouldn't be all that relevant).

While I felt pretty good about my decision to run the Spidery Grasps, there was one omission I'm still thinking about... 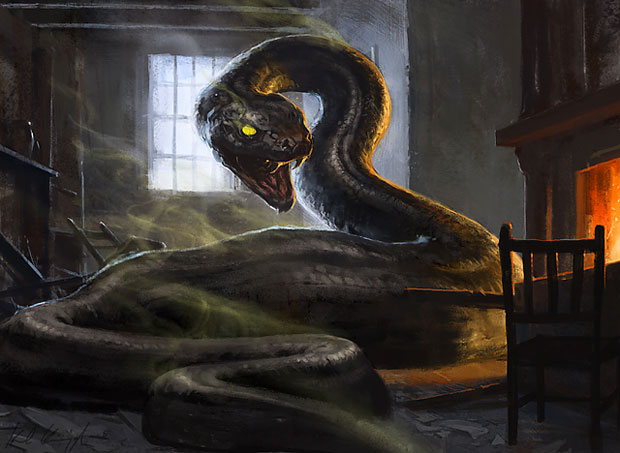 I left a copy of Wild Hunger in my sideboard at the Prerelease and I spent much of the tournament wondering if I had made the correct decision. Even with a couple of days to think about it, I'm still not sure if I should have included it, or possibly even added a Mountain to enable its flashback (and so I could run my Brimstone Volley).

Wild Hunger is an incredibly high-impact card that has the potential to be one of the defining cards of the format. There wasn't a single card in Innistrad Limited that allowed you to give a creature trample, so players could safely chump block a Krallenhorde Wantons with a Spirit token. Now if you make that very block, which would have been safe (and often very advisable) a week ago, you'll be in danger of taking 9(!) points of trample damage.

If you play in any Dark Ascension Limited events this coming weekend, be sure to keep an eye out for Wild Hunger, or else you might find yourself taking a ton of damage (seemingly) out of nowhere.

Mana Fixing and Splashing for Flashback

While it might look like just another card, I could see myself taking Evolving Wilds extremely early in drafts once I have a better sense of the format.

Having good ways to fix your mana is always very valuable if you're planning to splash a third (or a fourth, or a fifth) color—but that only matters if you actually want to splash additional colors in your deck.

One thing that tends to keep down the value of (even virtually painless) mana fixers like Evolving Wilds is that many formats actively punish you for dipping into extra colors. Adding additional colors to your deck can be quite the burden, as you don't want to get stuck in situations where you have an abundance of lands, but a hand full of uncastable spells because you don't have "the right lands."

However, if you're splashing for late-game bombs, or things like the flashback on Lingering Souls—then that burden is greatly alleviated, as you have a lot of time to find the mana you need for your splash

If your only concern is to be able to cast your splashed cards (and you don't mind paying one additional mana to do so), then Shimmering Grotto is going to remain your ideal Dark Ascension-Innistrad mana fixer. But most decks have concerns beyond whether or not they're going to cast their splashed spell(s). 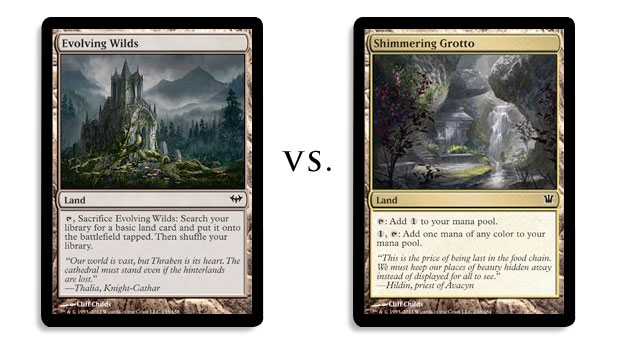 Evolving Wilds compares favorably to Shimmering Grotto in most decks thanks to its ability to help you find your main colors without giving up much (or any) time to do so.

During one of my matches at the Prerelease, I was able to use Evolving Wilds to fetch the second Forest I needed to cast my Strangleroot Geist on turn two and wound up punching in a ton of extra damage with it. That allowed me to win before my opponent was able to take over the game with a Bloodline Keeper (which I had no answer for in hand).

If the card you're looking to cast is extremely expensive, that will often make Shimmering Grotto's cost even more burdensome than it would be if you were splashing something cheap.

For most cheap splashes, like Brimstone Volley or the flashback on Lingering Souls, you will be able to cast them as soon as you draw your off-colored mana source. But for expensive splashes—like Drogskol Reaver, which costs a whopping seven mana to begin with—if you need to sink an additional mana into Shimmering Grotto to get your blue, you will need a total of eight lands to cast it. 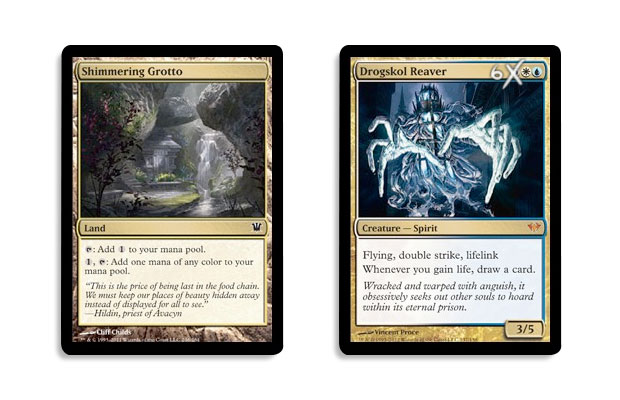 And while the difference between seven and eight mana might not seems all that significant—it's actually a huge deal. It'll often take you two (plus) turns to get from seven to eight mana, during which time you give your opponent quite a few opportunities to draw a removal spell, a game-ending trick like Wild Hunger, or a bomb with which to take over the game.

The Power of Tokens!

Before I go, I wanted to spend a little bit of time gushing about how strong of a card Lingering Souls is.

I won my second match almost entirely on the back of Lingering Souls, then lost the following match when my opponent cast, then flashed back, a Lingering Souls on turns three and four. I had a hand full of high-quality removal spells, but that meant very little when I was staring down four 1/1 fliers.

Intangible Virtue should see more play than ever before thanks to Gather the Townsfolk (the only common that can produce multiple tokens in the format) and Lingering Souls. The latter is a card capable of winning games without any help, but which becomes even more deadly when you give each of your four(!) flying tokens +1/+1 and vigilance.

If the only two spells you draw during the course of a game are an Intangible Virtue and a Lingering Souls, you will be able to beat your opponent by turn six (assuming no resistance).

If you're fortunate enough to open up a Lingering Souls in a Draft this weekend, you should probably first pick it. Even if you ultimately end up splashing black just for the flashback on Lingering Souls, you won't be disappointed.