Posted in Limited Information on April 28, 2009

he Alara Reborn Prerelease was last weekend and I had a really good time gunslinging. I got the chance to meet some of you in person for the first time (hi again!), I got to see some friends who I pretty much only see at Prereleases nowadays, and I even got a chance to catch up with a friend I haven't seen in four years.

Oh, and I got a chance to play with Alara Reborn cards for the first time.

How to Organize your Alara Reborn Sealed Pools

I opened up my packs to build my Prerelease deck and I was stumped. How was I supposed to organize my cards in a simple, coherent way?

I knew that there was an easy way to organize my pool, but I just couldn't figure it out. Between the monocolored cards, the allied two-color cards, the gold hybrid cards, the enemy two-color cards, and the three-color cards I was stumped. There were simply too many things going on to use a relatively simple organizational method like the one I used in Shadowmoor / Eventide.

Fortunately, my good friend Gabe Carleton-Barnes (who I worked with on my guide to Shadowmoor / Eventide sealed) was at the ready with a simple explanation.

Gabe: You use the exact same system we used for Shadowmoor / Eventide.
Me: But there are too many different types of cards to group it into seventeen piles.
Gabe: You just group the enemy-color cards along with the cards of their respective shard and the gold hybrid cards along with the monocolored cards.
Me: Oh. Right. 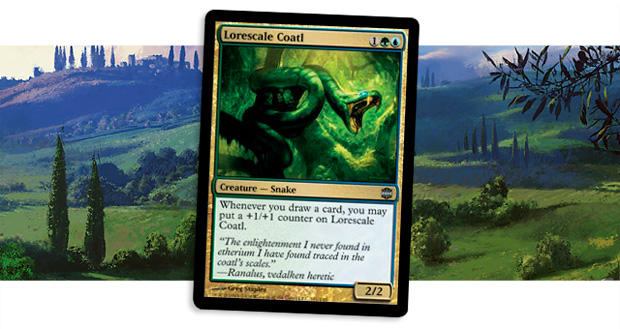 You're pretty much always going to end up playing at least one shard (if not four or five colors), so you can look at the enemy colored gold cards as tri-colored cards. Because you probably aren't going to be building a blue-green-red or green-blue-black Sealed Deck anytime soon, you can safely put that Lorescale Coatl with the rest of your Bant cards.

And, once again, because you are almost certainly going to be playing a full shard, you can look at the gold hybrid cards as monocolored cards. So, if you're playing white, you are almost certainly going to be in either Naya, Bant, or Esper (or five-color, which works for this method too), meaning that your Crystallization will almost always be playable. Even if you wind up building a two-color white deck this works out because Crystallization will work if you are coupling white with either of its allied colors.

With that in mind we can safely sort our cards into seventeen piles. 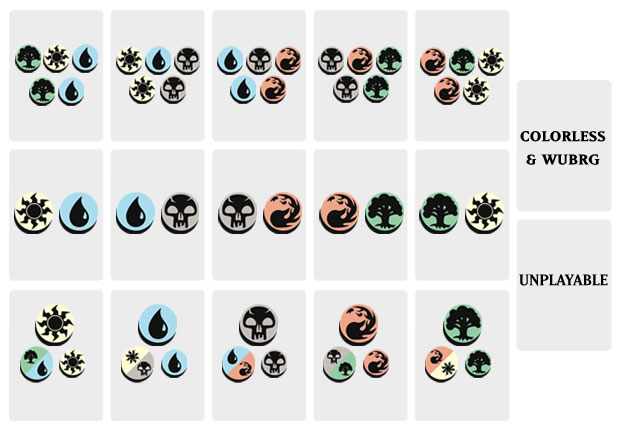 This was one of the best Sealed pools that I've ever opened. It didn't have any overwhelming bombs, but it had an eye-popping number of very good Grixis cards. I didn't even have to look that closely at the rest of the cards in my pool before I confidently set aside my non-Grixis cards.


I chose not to run my Obelisk of Grixis because I didn't want to run the risk of revealing it off of a cascade spell and being forced to cast a redundant mana source instead of something juicy. Breath of Malfegor and Singe-Mind Ogre are both my kind of cards, and I intend on playing them together a lot over the next 4 months, but this unfortunately wasn't the right deck for them.

It's quite possible that I should have just run the Singe-Mind Ogre over Grixis Sojourners. It's easier to cast and it can slam my opponent for a good amount of damage, and all that I really give up is a single power, a single toughness, and a rarely used cycling ability. 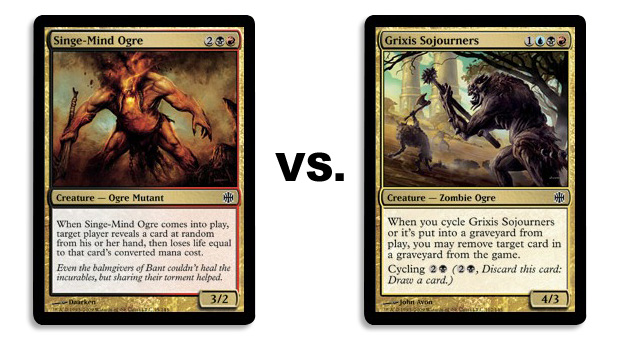 The more that I think about it, I almost certainly should have run my

3/2 with a fairly relevant ability over my

4/3 with a rarely relevant ability.

Kathari Screecher and Sanity Gnawers were both late cuts. Even though they are very solid cards (that work quite well with Bone Splinters I might add), there was nothing that I could justify running them over except possibly Jund Hackblade.

Necromancer's Covenant was a very painful cut to make. I'm pretty certain that this card is a certified bomb, especially in a deck that has as much removal as mine did, but there was just no way that I could reasonably splash it.

The thing that made my Sealed deck exceptional was not that it had multiple absurd bombs, it was that it had a lot of removal, very good mana, a good curve, and nothing but good cards. This deck had more in common with a very good draft deck than it does with most Sealed decks.

Cascade is an incredibly powerful ability. I'm willing to go so far as to say it's one of the most powerful abilities that I've ever seen. Fortunately, the good folks making Magic saw to it that none of the cascade cards were so powerful that they would make the format unfun (though Bituminous Blast, Enlisted Wurm, and Bloodbraid Elf are all pretty exceptional).

As good as you think cascade is, it's probably better. I know that I think cascade is amazing, but I have a strong feeling that it's even better than I'm giving it credit for.

But more importantly (in Limited at least), this means that you get to do things with the cascaded card before the initial spell resolves.

There were more than a couple of times at the Prerelease where I cast a Deny Reality to bounce my opponent's fatty, only to flip up a Terminate that I decided to use to kill the creature which I had already targeted with Deny Reality.

I didn't get a chance to live the dream and cascade into another cascade spell at the Prerelease, but I'm really looking forward to the look on my opponent's face the first time I get to pull that off.

... destroying artifacts is much better than it used to be. The Borderposts are going to be early picks for pretty much everyone. First off, this means that Naturalize and Filigree Fracture are much better main deck cards than they used to be.

Disenchant / Shatter effects have always been good against Esper decks (and other artifact-heavy decks), but they typically haven't been good enough to justify main-decking in Shards Limited or Shards / Conflux Limited. I have a feeling this is all going to change with the release of Alara Reborn and the Borderposts.

Sure, Naturalizing an Obelisk was always OK, it could put your opponent off of a much-needed color of mana, potentially setting them way back. But you could only do that if your opponent already had at least three mana, not exactly the point where you want to start attacking your opponent's mana.

I'll have to play the format more to know exactly how high of a pick Naturalize and Filigree Fracture become, but I'm pretty sure they're going to be main-deck staples for me from now on.

Similarly, Vithian Renegades should be a pretty high pick. A three-mana 3/2 isn't too shabby on its own, but couple that with the chance to blow up one of your opponent's mana sources (or even one of their best permanents) and you've got a pretty high quality card on your hands.

One other thing that is worth mentioning is that Volcanic Submersion doesn't actually get any better. Killing a Borderpost on turn five simply isn't anything to write home about. And while (I think) there is a slightly higher density of good artifacts now than there was in Shards / Shards / Conflux, it isn't a big enough difference to change the value of Volcanic Submersion by anything more than the most marginal amount.

Different people can see a card and think two completely different things. I was talking with a friend of mine about Mage Slayer:

Friend: It's a Lava Axe.
Me: I know, it's awesome!
Friend: When I think Lava Axe I don't exactly think awesome ....

Calling Mage Slayer a "Lava Axe" is definitely an oversimplification, but it is a very good shorthand explanation for why we feel the way that we do about the card. Mage Slayer did not excite my friend because he sees it as a card that is only relevant when you're ahead, in a stalled game state, or in a mid- to late-game race situation.

Mage Slayer excited me because I see it as a great way to punch through with fatty Naya decks and Exalted decks.

I don't think that Mage Slayer will be a particularly high pick for me, but I could easily see myself picking it up in the middle of a pack if I have a deck that is in need of a way to close out the game.

Just Because it's Good for Constructed ...

... doesn't necessarily mean that it's good for Limited. Thought Hemorrhage is certainly going to be a Constructed staple for the foreseeable future. In decks that can cast it, it is almost always better than Cranial Extraction, a card which made its presence known in Constructed for years.

But Thought Hemorrhage doesn't really do much in Limited. Sure, you might want to sideboard it in if you know your opponent has multiple copies of an especially powerful card such as Enlisted Wurm. But in anything other than extreme situations, you won't want have any good use for Thought Hemorrhage. And I haven't even mentioned that you can't use it unless you already know for a fact what special card(s) are in your opponent's deck that are worth naming.

Often times if a card is good in Constructed it will be good in Limited, but not always. Be careful not to blindly project lessons that you've learned from playing Standard into your understanding of Limited.

Alara Reborn is a very exciting set for Limited. Because all of the cards in the set are gold, they are allowed to be much better for their cost (on average) than cards from previous sets.

Between the Borderposts and the landcycling creatures that search for one of two different basic land types, there's plenty of good mana fixing in Alara Reborn, so people shouldn't have too much trouble casting their spells.

Because there's an abundance of very good cards in Alara Reborn, we should have even more control over what type of decks we want to draft than we have had over the last eight months. I'm really looking forward to my first opportunity to draft the full block next weekend.

Posted in Limited Information on April 28, 2009