Posted in Limited Information on August 3, 2010

know that it has been a long time, and I know that a lot of you have been asking for it, so I have decided to bring back the draft walkthrough. Seeing as this week is Feedback Week, I decided to do a walkthrough for a draft that we could all participate in: a Magic 2011 draft with the Draft Simulator.

My recommendation would be for you to do the whole simulated draft first, see what kind of a draft deck you would put together by yourself and then read what I decided to do. Maybe you decided to go a completely different route than I did, maybe we did basically the same thing but wound up being a couple of cards off from each other, or maybe we even ended up playing the exact same 40 cards.

Do the draft yet?

Now let's see what I did.

We should all be at least a little bit excited as we get to start our draft off with the extremely powerful Ajani Goldmane. Howling Banshee, Sylvan Ranger, Celestial Purge and friends are all good, but none of them can really compete with the bombtastic Ajani Goldmane.

Fauna Shaman, Gravedigger, Celestial Purge and Whispersilk Cloak are the next best options, but neither of them catch my eye in the same way that Blinding Mage does, especially when we already have an Ajani Goldmane. 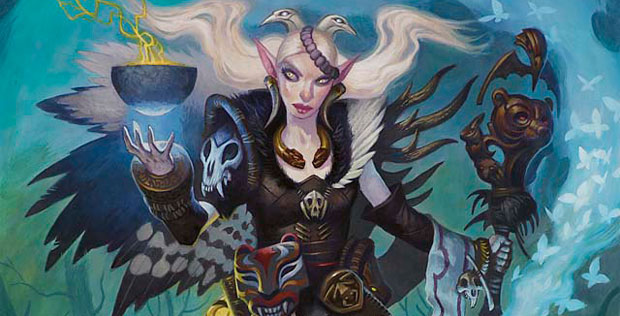 Even if you think that Fauna Shaman is a better card than Blinding Mage, which I don't necessarily think it is, I would rather go with the Blinding Mage because we already have an Ajani Goldmane that we really want to play. If we take the Blinding Mage, we will continue to leave our options open instead of pushing us towards the undesirable green-white color combination.

However, if you were playing in a draft where you got to keep the cards, and you really needed that fourth Fauna Shaman for your Standard deck, then I think it would make a lot more sense to take the rare.

Gravedigger, Wild Griffin and Gargoyle Sentinel are all pretty good cards, but none of them even approach Doom Blade's level. And if a third pick Doom Blade isn't a good sign to go black, then I don't know what is!

The Terramorphic Expanse comes in at a very close second for me this pick, with Æther Adept, Cultivate and Excommunicate coming in as my third and fourth choices.

Because I really enjoy drafting white-black in M11, I'm comfortable pushing myself further along the white-black road rather than leaving my options open with the Terramorphic Expanse.

The fact that the majority of decks end up playing either green, white or both makes Deathmark an excellent way to kill Yavimaya Wurms, Blinding Mages, and any number of other pesky creatures like Giant Spider makes Deathmark a very attractive main-deck option.

Given that you can only comfortably play a handful of five-plus casting cost spells, it makes a lot of sense to wait to start picking up your biggest spells until a bit later in the draft.

The only other card that is really worth noting in this pack is the Ice Cage, but it isn't a very good splash, and even if I had the mana to cast either the Ice Cage or the Mind Rot reliably, I would usually go with the Mind Rot.

There are too many opportunities to get blown out with your Ice Cage for me to want to take it over the old, reliable, Mind Rot.

(Ice Cage your creature, attack. You have a Giant Growth?—Ouch!)

Scroll Thief is the only other card worth noting in this pack, and there's no way that we would want to take it over our second Mind Rot when we are already heavily in white-black.

Like Deathmark, Celestial Purge tends to be pretty excellent in M11 Limited. While Mighty Leap can certainly be a strong option for your deck to have—the fact that most decks will be playing either black or red (it's really nice to have removal spells in your draft deck, and black and red just happen to be the two colors that have the highest density of removal spells, making them very attractive colors for people to draft) makes the Celestial Purge the pick here.

Besides, if we decide we do want a Mighty Leap or two, we will probably be able to get them later.

There is some chance that I will play the Diabolic Tutor main deck, and even if I end up leaving it in my sideboard for slower match-ups it will be worth more to me than any of the other cards in this pack.

Yes, yes, yes, yes! The huge, resilient, token-generating mythic rare Grave Titan is the clear pick here. Not only do we get one Grave Titan out of this pick, but now that we have a juicy enough target to justify running our Diabolic Tutor, it's like we have two Grave Titans! 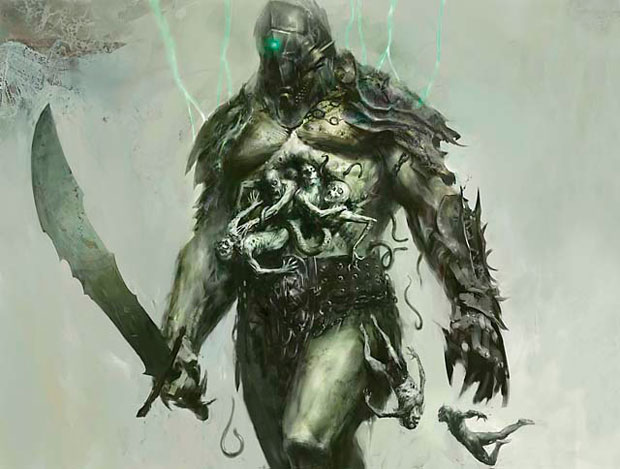 Deathmark is an attractive option, but I already have one of the green- or white-killer and I'm low enough on creatures that I feel like I should take the flying, first-striking 2/3.

While Honor of the Pure is definitely worthy of an early pick, right now I'm not sure that I will get enough white creatures to make it really good. And with that in mind, I feel that it's a safer and better choice to go with the aurific removal spell.

Prodigal Pyromancer is pretty appealing too, but rather than look to splash, I think it's time for us to start looking for Bloodthrone Vampires and Viscera Seers so we can sacrifice our eggs and make some omelets ... I mean 3/3s.

Given how much we already have going on in the air, and the fact that our curve is currently a bit high, I feel more comfortable taking a Condemn that can deal with pretty much any creature that our opponent has the poor sense to attack with than taking the Assault Griffin which we could use to help pummel our opponents.

At this point I think I would rather add my first combat trick, a Mighty Leap, to our deck than my first Squadron Hawk, even if I know that we are likely to get a Squadron Hawk tenth as we saw one the second pick of this pack.

I really dislike Tireless Missionaries and I don't think that we are going to get low enough on playable that we would have to consider playing it. Instead I go for the rare, and potentially sideboard-able (if we see enough Lava Axes), Leyline of Sanctity.

I toyed briefly with the idea of taking the Infantry Veteran, but I think that Sign in Blood is just too good in M11 Limited to warrant passing in this spot as our deck isn't really aggressive enough to take full advantage of the 1/1 Human Soldier.

I'll admit that I hate passing Mind Control even when there is no way that I could conceivably cast it—especially when I already have something as good as Grave Titan in my deck—but Assault Griffin is too good of a card for me to feel comfortable giving up on in this spot.

I'm happy to add another Assault Griffin to my deck, although I wouldn't argue with anyone who would choose to take a one-drop over it in this spot.

I don't really have an immediate interest in taking a second Palace Guard, and with only a single Knight in our deck, I have no problem passing the Knight Exemplar.

Mystifying Maze is a more than welcome addition to our deck that has few color requirements.

At this point I know that I am likely to get another Viscera Seer eleventh because we saw one when we were taking our first and third picks—so I'm not too drawn to taking it even if it does combo exceptionally well with our Roc Eggs. And while Ajani's Mantra is awfully cute with our two Ajani's Pridemates, I'd still rather go for an extra removal spell/combat trick in Stabbing Pain.

I'm not a big fan of Excommunicate, especially when we already have pretty decent removal and a good deal of three drops.

While I definitely want a Viscera Seer to go in our deck next to the two Roc Eggs, I'm willing to wait until the eleventh pick when we are likely to pick one up—especially when that means that we get to pick up the aggressive, utility-tastic Infantry Veteran.

Probably not going to want to main-deck two Stabbing Pains, but I could easily see boarding up to two against an aggressive deck, or a deck that's sporting a couple of juicy targets like Prodigal Pyromancer and Llanowar Elves.

A welcome addition given our two Roc Eggs.

To review, here's what I drafted:


The last few cards that I cut were the second Mind Rot, Stabbing Pain, and Infantry Veteran 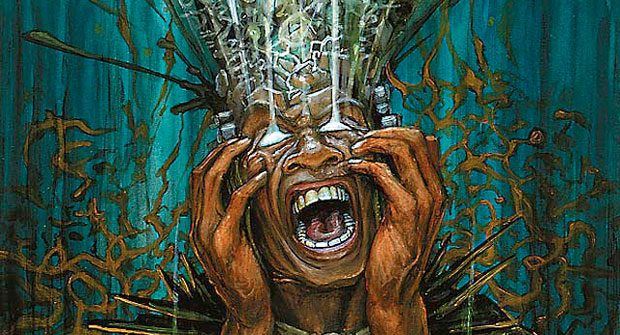 What did/would you do differently? 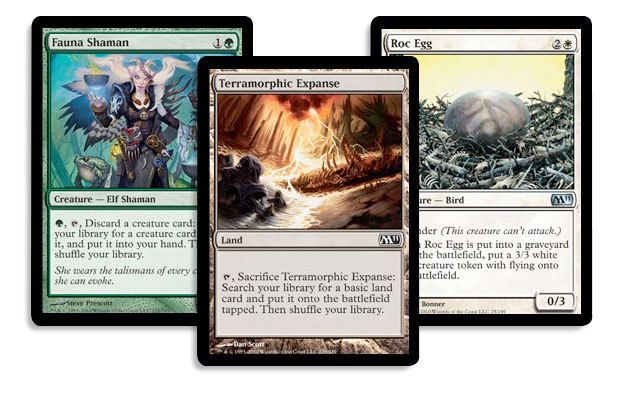 Post your final deck list in the forums to show me, and the rest of the world, a different way that this deck could have wound up.

Posted in Limited Information on August 3, 2010