Posted in Limited Information on March 19, 2014

he biggest hurdle I see Limited players face is difficulty in evaluating cards. I spend a good portion of energy attempting to improve that right here in this column. Card evaluation provides a fundamental foundation from which to operate in the world of Limited Magic. Being able to cut through the hyperbole, hype, and hearsay surrounding the release of a new set allows you to get ahead of the competition in a meaningful way. It also allows you to craft your own style when it comes to deck building and drafting.

We use many tools, shortcuts, and heuristics along the way to help us get a clean look at a card or format. The Vanilla Test, The Groan Test, uniqueness of effect, removal criteria, and various grading systems are all useful tools. I use these every day, and even more when new cards are being introduced. I continue to use and refine them. But it's also important to allow for new tools to appear in your toolbox. 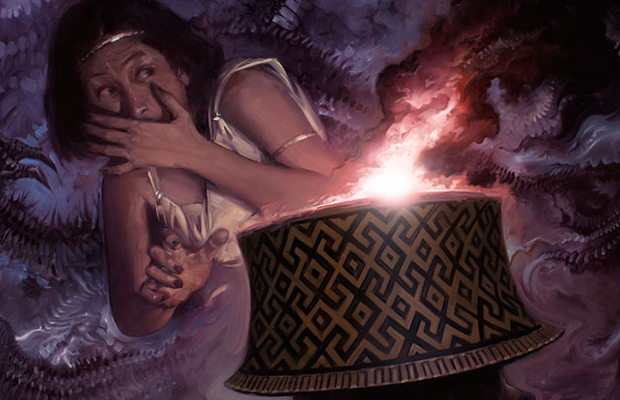 Today, I have a new tool for us to explore. I have been thinking about this one for a while, mainly because it filled a card evaluation gap that had bothered me for a long time.

I'm calling our new tool Setup Cost. I asked around about what to name it, and got a lot of great suggestions. Neediness, dependence, high or low maintenance, and many others were suggested. In the end, my friend Brian David-Marshall really hit a chord with Setup Cost. (Incidentally, his knack for naming things is why I asked him first.)

Let's get into what Setup Cost is, and how it can help us evaluate cards.

Setup cost answers the question, "What does this card ask of me?" What kind of extra effort am I going to have to put forth in order to make this into a great card?

I intend on using it in a simple, direct way: Either a card has a high setup cost or low setup cost. It's almost like a flag or an indicator on a given card. I find that tools that are easy to implement will be used more often, thereby making them more effective in the long run.

Some cards are inherently easy to work with. You cast them, they do what they say they are going to do, and you are pleased. Other cards are more finicky. They want certain conditions to be met before living up to their full potential. Maybe they want to be targeted by a spell you control, as is the case with the heroic ability. Perhaps they need a certain number of tribal creatures on the battlefield to be good, as was the case in Lorwyn block. It could be as simple as needing cards in a graveyard to be able to cast a spell, like most graveyard recursion spells (and some creatures, too).

It's an important distinction to make when looking at cards in a bigger picture. Sometimes, a card is just good. It doesn't need help; it doesn't require anything of you other than the mana to cast it. This card has a low setup cost.

Some examples from recent sets:

All of these cards know their role and simply ask that you cast them to meet that goal. Borderland Minotaur and Nessian Courser are solid creatures for the mana, and ask little of you. This has value. As we'll see further down the page a bit, this doesn't mean they are necessarily better than a high-setup-cost card, but it's a notable attribute nonetheless.

Why? Because even if you never cast anything that targets it, it's still good. It still packs its lunch in the morning and shows up to put in a good day of work, regardless of what we do after we cast it. Same with Nessian Asp. Even if you never pay for the monstrosity ability on it, the card still performs.

Even though these cards have tangible upside, they still fit the role of a low-setup-cost card.

Let's journey to the other end of the spectrum.

Setessan Oathsworn may be the poster child for a high-setup-cost card. If you don't have a spell that can target it, or if the Oathsworn is interacted with in response to the spell targeting it, it's kind of a disaster.

A quick Vanilla Test check shows that a 1/1 for three mana (in green, no less) is completely unplayable. It's only if you have the ability to target it with a spell that it becomes good, or playable even. This is something that I always wanted to be able to note while looking at cards for the first time, and now we have it.

Akroan Skyguard is the best white common from Born of the Gods. It's also a high-setup-cost card for the same reasons Setessan Oathsworn is; a 1/1 flier for two mana isn't really a playable card in Limited.

Which brings us to a major point of interest when it comes to implementing setup cost as a tool: high setup cost does not necessarily indicate that a card is worse than low setup cost. Again; it's not inherently bad for a card to have high setup cost. But it is something that you have to consider when evaluating it.

Aspect of Hydra is very typical for a high-setup-cost card; its floor is unacceptably low, but its ceiling is higher than you would expect from a card of this cost. If +2/+2 is the baseline for one green mana at instant speed, then Aspect of Hydra can either fail miserably at meeting this, or exceed it by a large margin. It's all about the setup.

Some cards require too much setup, like Thunderous Might. The floor is very low, but to really make this card great, too many things have to fall into place. It's just not worth it. The setup cost is too high.

Let's compare some cards to get a better feel for setup cost.

I can't lie, I like low-setup-cost cards. Nessian Courser, for the same mana as Setessan Oathsworn, is a rock-solid 3/3 body. Setessan Oathsworn starts out much lower, as a mere 1/1. Starting stats-wise, the Courser crushes the Oathsworn. This is relevant in the early stages of a game, when you are under duress from an aggressive opponent, for example. Similarly, if you are curving out on an opponent, a 3/3 that just attacks the next turn without any need for assistance is great.

So having a higher setup cost doesn't make it bad; it just makes it... pickier.

We have already established that Akroan Skyguard is a high-setup-cost card, but what about its bigger cousin, Wingsteed Rider? I consider the Rider a low-setup-cost card. I would play a 2/2 with flying for three mana in an aggressive deck quite happily; adding heroic only takes it from playable to fantastic.

Again, this shows that having high setup cost doesn't mean it's bad. It just means that you have to take it into consideration when picking it.

Imagine first-picking an Akroan Skyguard. Every pick you make after that has to consider the Skyguard in it. If given the choice between a heroic enabler or not, you will be leaning toward the enabler.

Now imagine first-picking a Chorus of the Tides. One of the great things about low-setup-cost cards is that they give you more flexibility during the draft.

Maybe you find yourself in the Theros pack facing a pick between Nimbus Naiad and Voyage's End. If your deck is more on the Chorus of the Tides plan, you can happily take the Voyage's End if creature interaction is what your deck needs. But if you are all-in on the Akroan Skyguard plan, you may just need to take the Naiad. Nimbus Naiad is a great card, but the flexibility to be able to choose which one you need for your deck is nice to have, and is granted by cards that are less demanding than others.

On the flipside of that equation, there are some decks that are all high-setup-cost cards, and this can be very good. Think of a tribal deck from formats of the past. If you have one card in your whole deck that cares about how many of its ilk are on the table, you are going to be disappointed by its performance. But if every card in your deck is of the same tribe, and they all care about having that tribe on the battlefield, your deck is going to be insane.

When going over a new card, or reviewing a new set, I plan on using setup cost as a way to differentiate cards being evaluated. I think it will prove a useful flag to put on cards in order to get that much deeper into the evaluation of the card. I certainly hope that you find it a useful tool in your own evaluations. Never be afraid to add a new arrow to your Limited quiver. They are—after all—what keep us ahead of the curve.

Posted in Limited Information on March 19, 2014