Seven Innistrad Commons I Can't Wait to Play With

Posted in Limited Information on September 20, 2011

he Innistrad prerelease is this weekend, and I can't wait. After a summer full of blazing-fast Magic 2012 Limited, it's going to be interesting to play in a format where one-mana 1/1s are only playable in very specific archetypes.

The entirety of Innistrad went public on Monday (you can see the whole set in the Innistrad Card Image Gallery), and I've already found a lot of things to be excited about. Flashback is one of my all-time favorite mechanics, so I'm very happy to see that back. I also get the feeling that I'm going to have a lot of fun drafting aggressive token strategies.

Then there are quite a few specific cards that I'm itching to play. Ready to see the seven commons I'm most excited about? Then read on!

If you're playing white and blue, Feeling of Dread will be even more impressive for you than Frost Breath was in Magic 2012 Limited.

The ability to tap four would-be blockers all at once will allow you to set up lethal attacks seemingly out of nowhere. Alternatively, you can use Feeling of Dread once early to get in a good chunk of damage and then again late to finish the job if your opponent is foolish enough to let their guard down.

Feeling of Dread is a fantastic card to have if you're in a tight race. So you've got a bunch of fliers, but your opponent has some giant green creatures? Tap 'em down, and go to town!

If you have a Feeling of Dread sitting there in your graveyard, you can represent a lot of damage—so much so that your opponent might play extra conservatively, giving you the time that you need to put together the pieces required to actually kill your opponent in the long game.

While I don't think it's a first-pick quality card (though it easily could be), I suspect that Feeling of Dread will be a lynchpin in my aggressive white decks for months to come.

A 3/4 flier would be a bargain for five mana; at only three mana it's an absolute steal.

While not quite as impressive as Stitched Drake, Makeshift Mauler is still an incredibly strong threat that will be able to stand toe-to-toe with pretty much everything that your opponents might put in front of it. All for only four mana.

Are Stitched Drake and Makeshift Mauler good enough to make it worthwhile for you to play a card like Dream Twist in your deck, just to ensure that you have creature cards that you can exile from your graveyard? Probably not, at least unless you have a TON of them. 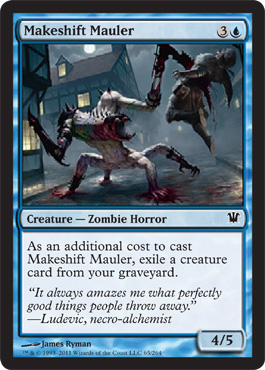 But these cards make it even more important for you to pick up copies of Forbidden Alchemy, Deranged Assistant, Mulch, and even Armored Skaab than you probably realize. 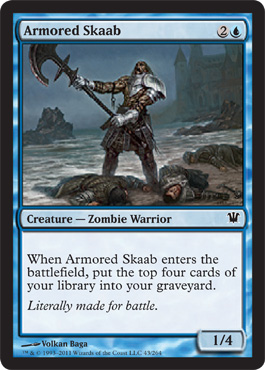 Be prepared to take those Armored Skaabs early—you're going to need them.

I have a bizarre love for 1-toughness creatures. Sure, they're weak to things like Geistflame, and the fact that pretty much any creature can block and trade with it is certainly a problem. But if your opponent doesn't have a card that is specifically good against your X/1s, you can get a lot of mileage out of them.

A 5/1 creature can be surprisingly good on defense. If you need a way to block your opponent's big green creatures, then look no further than Rotting Fensnake.

Also keep in mind that the fact that Rotting Fensnake will get into a lot of trades can actually be a big plus for you if you are trying to set up morbid, or if you need to fill your graveyard full of creatures so you can cast your Stitched Drakes and your Makeshift Maulers.

There aren't a ton of Zombie cards in the set, but there are a number of cards that work extremely well with Zombies. Ghoulcaller's Chant and Ghoulraiser are both fine cards on their own, but if you have Zombies to bring back with them, and removal spells to deal with your opponent's deadliest threats, you will be able to out-attrition almost anyone.

But maybe you don't want to use Rotting Fensnake as a role player that helps you eek out a marginal advantage. Maybe you just want to clobber your opponent over the head with it four times, and then cackle as you shuffle up for Game 2. Well then, you're in luck, because there are quite a few cards in Innistrad that let you turn Rotting Fensnake into a top-notch threat.

Cobbled Wings will allow you to clock your opponent for 5 points a turn. Feeling of Dread and Nightbird's Clutches can both set up multiple turns of unhindered attacks, and Sharpened Pitchfork will turn your Rotting Fensnake into a 5/1 first striker (good luck blocking that profitably!).

Brimstone Volley is not only one of the premier removal spells in the set, it also serves as an excellent finisher. There are only a handful of creatures in Innistrad with 6+ toughness, and most of them are green and/or rare.

So against most opponents, your Brimstone Volleys will literally be able to kill anything on the battlefield if you can satisfy the morbid condition. Not bad for only three mana.

And don't even get me started about the fact that Brimstone Volley can whack away a quarter of your opponent's life total.

While Lava Axe will act as a great finisher sometimes, the reason why it isn't a particularly exciting card is because it will literally do nothing in a good percentage of your games. But if you put the ability to Lava Axe your opponents as the alternate mode on one of the best removal spells in the set, you wind up with a card that's going to be excellent for you whenever you draw it.

If you are fortunate enough to open multiple Birmstone Volleys in your Sealed Pool or your draft this weekend, then your opponents better watch out. You're going to be able to kill pretty much anything that they put in front of you, and you might be able to burn them out even from a seemingly safe 10 life.

As a three-mana 2/3, Villagers of Estwald is a pretty efficient creature. No, those aren't the kind of stats that anyone will go crazy over, but it can still comfortably fill out an early spot in your curve.

But when night falls (a turn goes by without anyone casting spells) and the Werewolves come out, you'll find yourself with a creature that you could have very reasonably spent six mana on.

It's incredibly easy to transform a Werewolf if that's what you want to have happen.

If you notice that you're bleeding a little bit more than you want to, you can take a turn off from casting spells to transform your Villagers of Estwald and stop your opponent's offense dead in its tracks.

Similarly (and perhaps more commonly), if you're having mana problems and you can't cast any spells, you'll be able to buy yourself quite a bit of time by transforming your innocuous 2/3 into a fearsome 4/6 Howlpack of Estwald.

Note that Werewolves get significantly better when your deck is full of instants. If you can pass your turn with no play, and still use your mana to kill off an opposing creature, or counter a key spell, then you will get all the benefits of transforming, without giving up any time. (Note that instants also make opposing Werewolves less effective, as you will be able to stop them from transforming even if your opponent opts to not cast any spells on his or her turn.)

Once your Werewolves have transformed, it's pretty hard to transform them back. They only transform back if a single player casts two spells in one turn, so your opponents will probably have to go out of their way to turn your Howlpack back into some innocuous Villagers. 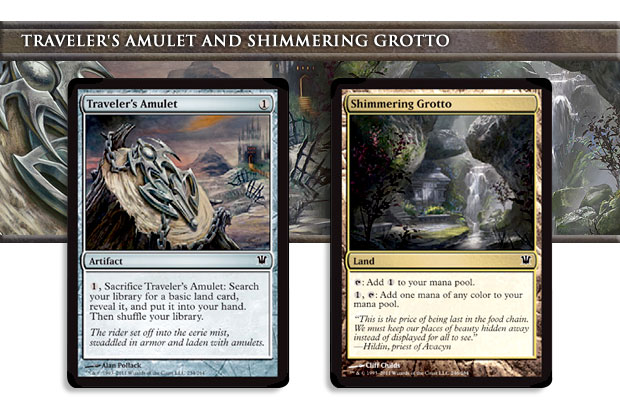 If you splash a spell off of just a few appropriately colored mana sources, you need to deal with the fact that it may end up rotting away in your hand for turns and turns. There are times when pretty much any castable spell would be enough for you to win the game, but instead you had that off-colored removal spell taunting you for turn after turn as your opponent slowly takes over.

Then there are the times when you draw all of your splashed lands, and your green mana fixers, and a bunch of green spells... but no Forests.

Colorless mana fixers can minimize the chance that you will encounter any of these nightmarish scenarios. Not only that, but you don't have to give up much time, and you don't need any specific colors of mana to make Shimmering Grotto and Traveler's Amulet work.

The ability to splash off-colored removal spells and bombs without hurting your mana base in any significant way is always welcome. Add to that the fact that you can make good use of your flashback cards like Feeling of Dread and Forbidden Alchemy at next to no cost, and you're going to find that the bulk of your decks in Innistrad Limited will benefit greatly from a mana-fixer or two.

This past weekend I got the chance sit down with Pro Tour Philadelphia Top 8 competitor Sam Black at Grand Prix Montreal (where he just barely missed making Top 8 after suffering a heartbreaking loss to Reid Duke in the final round). I talked to Sam about the differences between core set Limited formats and block Limited formats. 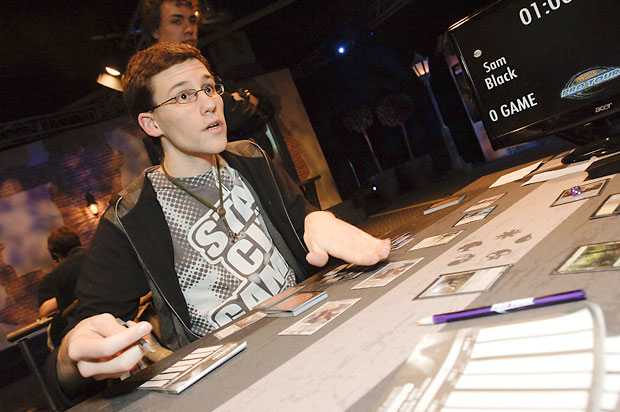 During our interview, Sam explained that the power and prevalence of linear mechanics—such as tribal, infect, and now exiling creatures from your graveyard as an additional cost to cast overpowered creatures—encourages players to place a very high value on synergy in block Limited formats (whereas in core set Limited formats players should instead focus on their mana curves, and maximizing the raw power level of the cards in their decks).

What does this mean for you? It means that you are going to reap great rewards if you stuff your deck full of cards that fill up your graveyard so you can get a ton of mileage out of your Stitched Drakes, or if you go all-out tribal and take advantage of the fact that you can generate a ton of Spirit tokens.

The fact that you might give up a bit of power on individual cards won't matter much when all of the cards in your deck work together.

Have fun this weekend at the Innistrad Prerelease! I know I will.

Posted in Limited Information on September 20, 2011