Shards of Alara, Not So Fara

Posted in Limited Information on September 23, 2008

Gold cards tend to be more powerful than monocolored cards for the same mana cost. In order to play the powerful two- and three-color cards that are going to be found in Shards of Alara, you are going to have to bend your mana a bit more than you became used to doing in Shadowmoor or Shadowmoor / Eventide Limited.

I remember plenty of times over the last six months when I'd be looking at a monocolored deck, wondering if it was worth adding three or four lands of a second color to splash something like a Puncture Blast. Things aren't going to be that easy on your mana for a looooong time. 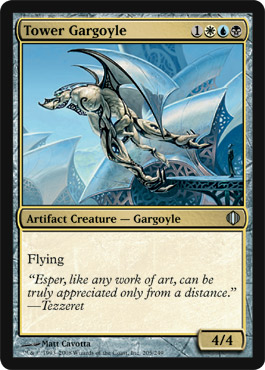 So, instead of thinking back to Lorwyn / Morningtide, Shadowmoor / Eventide, or even Time Spiral block Limited, we should look back to the last time we played in a gold-heavy format for an indication as to how our mana is usually going to look.

The last time we played in a gold-heavy format was Ravnica block. One of the most important parts of that block was working to get your mana right so you could play your most powerful cards. In Ravnica-only draft, the solution was often to play one of the four two-color combinations, possibly with a light splash. However, once Guildpact and Dissension hit the scene, playing a two-color deck became a harder and harder thing to do as there were more and more excellent gold cards in different color pairs luring you towards a third, fourth, or even fifth color.

Now in order to want to play a three- (or more) color deck, you need to have a good reason. And I have no doubt that almost every time you play Shards of Alara Limited, you are going to find a good enough reason to dip into that third color. For example, Tower Gargoyle is an ideal reason to play three colors. It is simply a gigantic, hard-to-kill, undercosted flier. Really, what more could you ask for from a card? The only thing you need to do is make sure that you can actually play it.

Since you're going to be hard pressed to play a deck that doesn't feature at least three colors (though one of those colors could easily be a splash). Gone are the days of playing decks that feature mana bases like "13 Forests, 4 Swamps" or "9 Plains, 8 Mountains" or "10 Swamps, 4 Islands, 4 Mountains" like you did in Shadowmoor / Eventide. In Shards of Alara Limited, you should expect to see a lot of decks with mana bases that look more like "7 Plains, 7 Islands, 3 Swamps, 1 Arcane Sanctum." 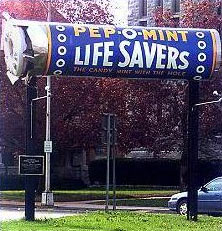 Back in Ravnica / Guildpact / Dissension Booster Draft I would first or second pick the "Karoo" lands, such as Dimir Aqueduct, on a pretty regular basis. While I wouldn't take them over things like bombs or top-notch removal spells, I would have no problem taking them over any other sort of above-average card. Why? Because being able to play your spells in a timely manner is always a pretty important thing to do.

Now, the Karoos were kind of a special case because they were, in a way, actually two lands in one. So you would give up a little bit of time, and in exchange you would fix your mana and you would be up a virtual card.

That being said, the multi-lands that Jake previewed here are going to be gigantic lifesavers for anyone with a three-color deck. So, don't be afraid to take cards like Arcane Sanctum or Naya Panorama early in a draft—they are definitely going to come in handy no matter what type of deck you end up drafting.

Even if you only need two of the colors that a tricolor land would allow you to produce, that land is still a card that you would very much like to have in your deck. It's easy to get spoiled by the great mana-fixing of recent sets, but there was a time when people would get a Coastal Tower and be extremely happy that their nongreen deck was going to have any mana-fixing at all.

Oh, you know how I was just talking about how gold cards can be pretty awesome? Well, if you had any doubt, just take a look right .

Now, in Booster Draft, a card that does 3 damage for 3 mana is traditionally a very first-pickable card (think Puncture Blast or Galvanic Arc or Rift Bolt or Carbonize...), and Branching Bolt is no exception. In fact, Branching Bolt is on a different level from most of its colleagues. Once you get past the fact that Branching Bolt needs both a red mana and a green mana to be played, the biggest thing that it's lacking is that you can never target your opponent with it. I can tell you right now, not being able to deal damage directly to your opponent is a very small price to pay for the ability to kill an extra creature.

When you're at the Prerelease and you are able to smoke, say, your opponent's Jund Battlemage and Sedraxis Specter, you're going to be a very happy mage.

A Peek Back at Lorwyn / Morningtide

Let me tell you, it was a blast to read. Not to give too much away, but Saito started off his draft with a choice between Dread and Nameless Inversion—what a fun question! Saito took a second-pick Nova Chaser and then moved firmly into red. He opened and took an Imperious Perfect in the second pack, and then he got passed a Cloudthresher, cementing him into green. Unfortunately for Saito, things went a bit downhill soon after that.

Even though the draft didn't work out perfectly, just reading about it really cheered me up. In a weird way I had almost forgotten that I'm going to have more opportunities to draft Lorwyn cards. Even if those opportunities aren't obvious right now, I'm going to make sure that they happen. The thing is, old and not so old Limited formats can come back to life whenever you want them to. The only things you need are the packs and the people.

Earlier this year I had an absolute blast at the Barron Vangor Toth memorial draft tournament, where we got a chance to draft Onslaught block, Odyssey block, and Invasion block. BDM wrote all about it here. While on that occasion we were brought together by truly unfortunate circumstances, there's nothing preventing me, you, or anyone who has ever picked up a Magic card from putting together an old-format draft day. Every time I've been a part of one I've had a great time. Jeez, the more that I think about this, the more I want it to happen. I guess what I'm saying is, don't be surprised if you hear me writing about an old-format draft day soon (well, not that soon, there's a new set coming out in just a few days!).

Let me know why you picked the format that you did in the forums. I'm always curious to hear what people like the most about Limited.

Oh, and if you are at the Prerelease at Neutral Ground in New York, please stop by and say hi!

Posted in Limited Information on September 23, 2008