s Mark Rosewater explained in his article last week, Scars of Mirrodin block will be the sequel to the original Mirrodin block. For those of you who are familiar with Mirrodin, Darksteel and Fifth Dawn you already know that this means that we can expect a lot of artifacts.

Back in Mirrodin block, players would take Shatter over Terror without batting an eyelid. This might sound a little weird if you weren't playing back then, in most formats Shatter would collect dust in your sideboard—while Terror would be one of the absolute top-picks in the set. But in the artifact heavy Mirrodin block, Shatter was one of the very best cards that you could get your hands on. It killed creatures, it killed equipment, it killed Icy Manipulators, heck, it could even kill artifact lands like Seat of the Synod! 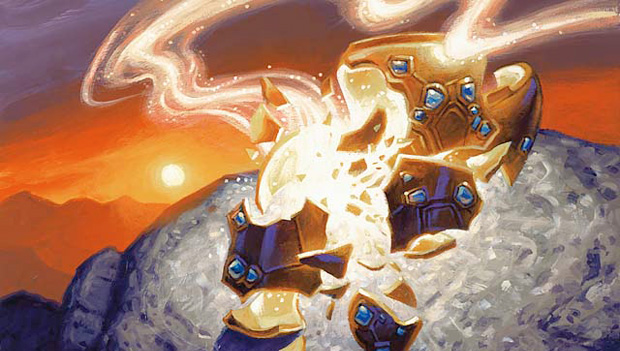 I did literally hundreds of Mirrodin block drafts back in the day, and I remember vividly how good Shatter was—but even so, it feels weird to acknowledge that there was (is?) a time and a place where it is correct to take Shatter over multi-generational all-star Terror.

While time will tell what kind of removal spells will climb to the top of peoples wish lists when Scars of Mirrodin hits the scene—from what I have seen and heard so far I feel it is pretty safe to say that artifact removal spells will be worth their weight in gold beginning in just a few short weeks.

While I get giddy over the upcoming release of every new set, Mirrodin block was one of my favorite Limited formats of all time, so I'm particularly excited to see what Mark Rosewater, Mike Turian and the rest of the Scars of Mirrodin design and development teams have in store for us.

I think it's particularly cool that Mike Turian, who was absolutely dominant in Mirrodin Block Limited (having racked up back to back Pro Tour Top 8s, a Grand Prix win and another Grand Prix Top 8 before leaving the Pro Tour to take a job working in Magic R&D), is the lead developer of the set. Mike Turian clearly understood the ins and outs of Mirrodin Block Limited in a way that nobody else in the world (save perhaps Nicolai Herzog or Anton Jonsson) did, so I think it will be great to see his fingerprints on the sequel to Mirrodin block.

The Newest Member of the Family

Because Scars of Mirrodin is the sequel to Mirrodin, we should expect to see new versions of some of our favorite cards from 2003 and 2004.

While we aren't going to see anything as frustratingly powerful as Skullclamp or Arcbound Ravager (thank goodness!), I expect that a lot of the cards in Scars of Mirrodin will be better than their mechanized ancestors.

While it's true that in most match-ups, and decks, I would prefer to have a 2/2 instead of a 1/3. The exceptions to this are in match-ups where my opponent has a lot of 2/1 creatures, or in decks where I have a lot of ways to (easily) permanently enhance my creatures' power. While I don't know how many 2/1s are in the set, I do know that there are going to be quite a few fun ways to permanently enhance the stats of our creatures, and quite a few cards that will provide us with benefits for controlling an abundance of creatures.

The other way in which Sylvok Replica differs from its Mirrodin counterparts is that because combat damage no longer goes on the stack, players will no longer be able to put their replicas into combat, then sacrifice it with damage on the stack for a nice two for one. 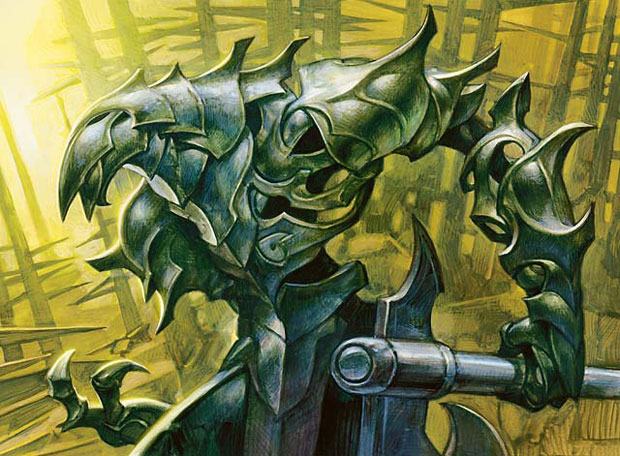 While this would be a huge hit to cards like Goblin Replica, or Nim Replica, (who really needed that chance for extra card advantage to become something at all special given how expensive their activated abilities were) the fact that you can easily play and activate Sylvok Replica all in the same turn means that you won't be crying about a lack of utility any time soon.

Further, the fact that Sylvok Replica can kill enchantments as well artifacts is likely to come in handy in some serious ways. Sure the majority of the time you will be paying a green mana and sacrificing your replica to kill an artifact, but there are no doubt going to be some very relevant enchantments in the upcoming set. If your opponent plays a Pacifism type card, or some sort of game-breaking rare enchantment, you will be very happy that Sylvok Replica can do more than just Shatter things.

Far from being inferior to its slightly above average Mirrodin counterparts, Sylvok Replica is likely to become one of the top picks in green and possibly in the entire set. Creeping Mold was a very high pick in Mirrodin Limited, and while Sylvok Replica can't destroy lands, it is pound for pound a better card in Limited than the classic green sorcery.

Why is it better you ask?

For starters, you only need a single green mana to activate Sylvok Replica and you can cast it with purely colorless mana. This means that you can start your draft with a first pick Sylvok Replica, and you will be able to play it even if you only make room for 1-2 green sources. It also means that you will be able to reliably activate it, or at the very least cast it, in your solidly green deck even if you are having a bit of trouble with your mana.

Because Sylvok Replica is a creature, you don't have to worry about choking on a Sylvok Replica in a way that you might with a Creeping Mold. None of this desperately wanting to do something with your mana, but being unable to do anything because your opponent doesn't have any artifacts, enchantments, or even lands worth destroying. That is, at least until the turn where your opponent casts a big threat and you untap and draw a big threat of your own but must choose between using your mana to cast your Creeping Mold to off your opponent's card, or playing your own threat.

In fact, there are plenty of times where you would prefer to have a creature—at least for a period of time—than a removal spell. Sylvok Replica can attack, block or stand idly by and still remain at the ready as a removal spell for as long as you keep that green mana open to Naturalize your opponent's permanents.

More Than Just a Body

In Scars of Mirrodin, Sylvok Replica is much more than just a body. There are going to be plenty of cards that give you substantial benefits for having artifacts – so if you can load your deck full of cards that are good regardless of the circumstances, that also happen to be artifacts, you will be in very good shape to take advantage of some of the top synergies that the set is going to offer.

But will you always want to play your Sylvok Replicas at the earliest moment possible?

When you start playing Scars of Mirrodin Limited, you will often have to choose between casting your Sylvok Replica into a cluttered board (where it is unlikely to have much of an immediate effect) or holding onto it until your opponent plays something juicy that you want to destroy.

In general, if you see yourself tapping out for the next couple of turns, you will probably want to wait on casting your Sylvok Replica if you have a card that you can cast that will have a more immediate impact on the board. However, if you are choosing between casting your Sylvok Replica or doing nothing—you will generally want to cast your 1/3, unless you know that your opponent's deck is both: full of removal spells, and contains some particularly impressive and hard to deal with artifacts and/or enchantments.