Signs of Things to Come

Posted in Limited Information on January 27, 2009

ast week you opened up your first pack of the draft, and it contained:

For me the pick comes down to Sprouting Thrinax, Tidehollow Strix, or Blister Beetle.

Yoked Plowbeast, Bant Panorama, Call to Heel, Gift of the Gargantuan, and Excommunicate (as well as the rest of the pack) are at least a step behind these three powerful black creatures.

Compulsive Research and Thirst for Knowledge were both very early picks in their respective formats, and both put you up a net of 0-1 cards. And let me tell you, these cards were excellent.

You see, Compulsive Research and Thirst for Knowledge let you go through a lot of cards. Early in the game they will do wonders to smooth out your draws, and later on you can cash in some of the unnecessary lands for some new goodies. Gift of the Gargantuan doesn't do that.

Sprouting Thrinax is unquestionably the most powerful card out of this bunch, but it's also by far and away the most difficult to cast.

Tidehollow Strix is the next most powerful card, but it can also be a bit of a challenge to support the blue and the black in its mana cost.

Blister Beetle is a pretty good card, but it's noticeably less powerful than Tidehollow Strix or Sprouting Thrinax. 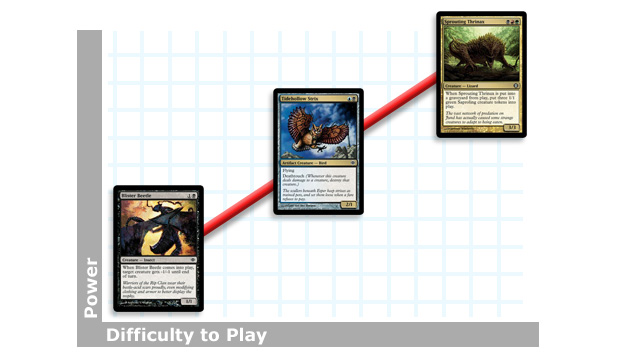 So how do we choose?

Right off the bat I have to cross out Blister Beetle. While I love taking easily playable cards with my early picks, you need to have a very good reason to take a card that is substantially lower in power than the most powerful card in the pack.

So now we're down to Tidehollow Strix and Sprouting Thrinax.

I like Sprouting Thrinax a lot, but I really hate making that type of a commitment on a first pick. Not only is it nice to keep your options as wide open as possible, but you get some huge benefits from passing the

Put yourself in the person to your left's shoes for a second. You just got passed a pack with Sprouting Thrinax and not much else. There's a common missing. Unless you just took a Sharding Sphinx or some such, that Sprouting Thrinax is almost certainly making its way into your pile.

Shift back into your shoes and now you can feel free to draft with the knowledge that one of your immediate neighbors is likely trying to move into Jund. Passing a Sprouting Thrinax sends a powerful signal, and while it might not put the person to your immediate left into Jund, given this pack it'll almost certainly be gone within a pick or two.

Pushing someone into a shard early is a very powerful thing to do, as you know with reasonable certainty what he or she is going to be drafting and you can plan accordingly.

If you get passed something like a third-pick Tower Gargoyle then you're suddenly in an ideal position where you're trying to draft Esper and the people to your immediate left or right are probably clear of your color combination.

Keep in mind that if you do not continue to pass good Jund cards then the neighbor who took the Sprouting Thrinax might simply move out of Jund. So if you go into Esper, but you've also passed a Sanctum Gargoyle, some Courier's Capsules and the like but very little Jund, then don't be surprised if you don't get much Esper in pack two, even though you passed that initial Jund card!

So, I would take the Tidehollow Strix. It isn't that much weaker than Sprouting Thrinax, and it'll make your draft go a whole lot smoother.

All of a sudden I find myself taking Jund Charm. Why? Because Jund Charm's just too good. Sure, you send a more powerful signal by passing Jund Charm than you would by passing Sprouting Thrinax, but you're giving up a lot more to do so.

If a card is very powerful, then that will often just overshadow all of the other clever, tactical things that could take place.

First off, I feel that I should mention that I like counterspells a lot more than most do in Limited. Part of this stems from the fact that I like to draft aggressive blue decks or decks with a lot of removal that can usually make good use of a timely counterspell. Another part is simply that I think they're better than most people give them credit for.

As for Punish Ignorance, I don't love it, but I like it.

I know that this Esper counterspell was attracting some heat in the forums last week, but I don't think that there is anything wrong with it. I wouldn't recommend taking Punish Ignorance early, but I can honestly say that it has made the cut in every deck I've had that can reasonably cast it. I can also honestly say that I'm yet to be disappointed by it. Sure it can be hard to cast and it's a lot less flexible than Cancel, but a 6-point life swing is pretty big, especially when you don't have to spend a card to get it.

If you have a deck with a lot of evasion, then you're probably going to get into a lot of race situations. If that happens, then that 6-point life swing will make a huge difference.

One common criticism of Punish Ignorance is that you have to leave so much specific mana up to play it and your opponent can just play around it. While this is certainly true, the fact that it offers a sizable effect whenever it resolves means that you can feel comfortable countering even the lowliest of spells as you are still coming out way ahead on the exchange.

We're just days away from the Conflux Prerelease, and this new set is sure to force us to reevaluate a lot of what we "know" about drafting Shards of Alara.

One important thing to keep in mind is that the shards are going to stay the same. That means you can feel free to safely continue playing black-red-green, blue-black-red, white-blue-black, red-green-white, and green-white-blue. So, while plenty of Shards of Alara cards are going to go up or down in value depending on the cards in Conflux, you probably won't have to worry about the colors getting too mixed up.

So, yes, you'll still be able to first-pick that Sprouting Thrinax (or Naya Charm, or ...).

One thing that I have noticed from the Conflux Visual Spoiler is that it's likely going to be easier to get your colors in Shards / Conflux Limited than it was in straight Shards. Basic landcycling cards like Fiery Fall mean that you're going to be able to play splash cards without having to load your deck full of obelisks.

Couple that with the domain cards, such as Matca Rioters and Exploding Borders, that explicitly reward you for playing with lots of colors, the five-color spells such as Fusion Elemental and the creatures such as Dragonsoul Knight that gain enormous bonuses if you pump one of each mana into them and you shouldn't be surprised if you see a lot more five-color drafters come Prerelease time.

Some Things to Consider

Now if you get a Maelstrom Archangel or something similarly appealing and colorful in your prerelease sealed then you are probably going to want to play all five. 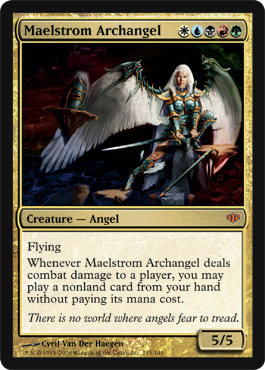 However, that isn't necessarily what you want to be doing. If you don't have good enough mana-fixing to play five colors, then don't force it. If you have a consistent, solid two- or three-color deck, you will almost certainly do better than you would have if you had played a clunky, erratic five-color deck. 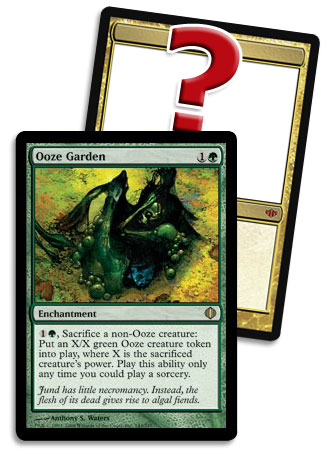 Another thing to keep in mind is that some of the old combos that you're used to getting on the regular when you were playing triple Shards aren't going to be nearly as easy to come by once Conflux is released.

For example, who doesn't love playing a Dragon Fodder and then making a turn-three 7/7 Thunder-Thrash Elder?

I also know that I'm going to be doing a lot less of it come this weekend. While this is a little bit sad, I'm glad that I'll have the opportunity to draft a whole new slew of combinations. Who knows, maybe we'll finally be able to find a good use for Ooze Garden (which I singlehandedly lost to in what will be one of my final Shards / Shards / Shards).

On that note, Happy Prereleasing!

Posted in Limited Information on January 27, 2009