friend of mine recently did his first ever Rise of the Eldrazi Draft on Magic Online, he had drafted a pretty solid white-black deck with a lot of good creatures and some great removal spells. If his opponents' decks came out slow, or stumbled even a little bit, he would be more than ready to take over the game with his abundant supply of removal spells and big creatures. His first round opponent played a turn two Kiln Fiend on the play. My friend cast a Knight of Cliffhaven and passed the turn looking at a hand with Cadaver Imp, Bala Ged Scorpion, Consuming Vapors, Corpsehatch and a couple of lands. He was feeling pretty good about his chances ... 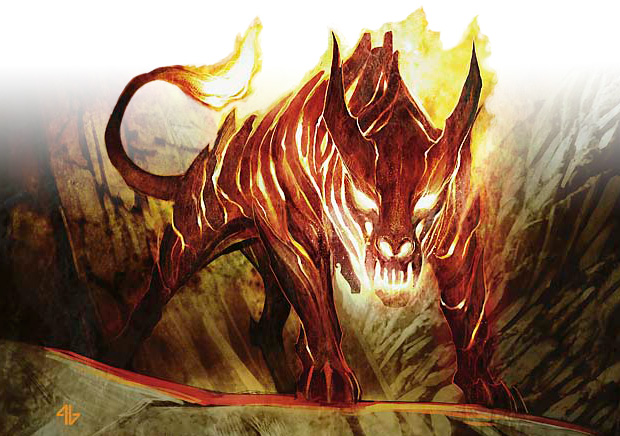 Until his opponent untapped, cast two Distortion Strikes and killed my friend before he got to take his 4th turn.

If that Kiln Fiend had been any other card, the game would have gone completely differently. It could have been a Kargan Dragonlord, a Wild Mongrel, an Ancestral Recall, a Black Lotus, a Masticore, an Overrun, or even an Umezawa's Jitte and my friend would likely have had a shot at that game.

But nope, it was a Kiln Fiend, and he was dead before his 4th turn. 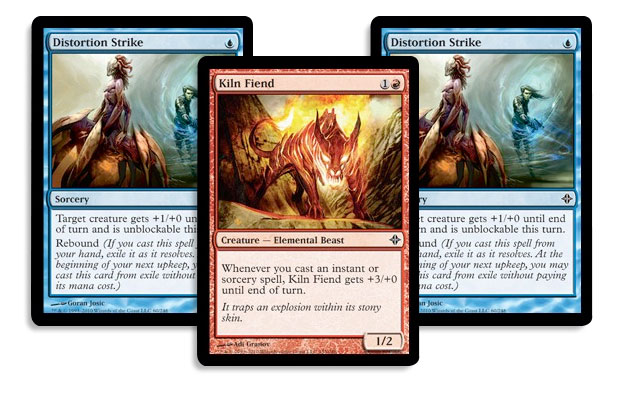 Many strategies revolve around a single card. The more copies of that card you get, the better and more consistent your deck will be. If you don't get any copies of your deck's signature card, then you are going to be in a world of hurt, especially if you drafted assuming you would get them. Even if you only get one, or two copies of that key card, you might find yourself struggling to get by as many of your games will see you draw complementary card after complementary card but without the deck's linchpin, or many copies of its linchpin, it just won't matter.

The most obvious example would be something like a Tome Scour deck in Magic 2010. If you don't draft, and draw a ton of copies of the blue milling sorcery, it won't matter how many good defensive cards you draw, you probably aren't going to be able to deck your opponent.

Other times, a deck's key card will make your draws significantly stronger, but it is not necessary for your deck's success.

As we discussed last week, Venerated Teacher does great things for a level up deck, but even if you don't draw it you should still be able to put up a pretty good fight with Knight of Cliffhaven and friends.

So how do you know if a strategy requires you to go all in on a specific card, or if it merely gets better with the inclusion of that card?

Tome Scour, and for those of you who have been around for a while Dampen Thought, are very easy ways to understand what it means to move all in on a single card. While Tome Scour requires a ton of copies to become playable, you only needed a single copy of Dampen Thought for your Dampen Thought deck to be something to fear. Obviously you would always want to have as many copies of the splice-able mill spell as you could get your hands on, but a single copy would often be enough thanks to search spells such as Eerie Procession and Peer Through Depths.

Please note that having these cards alone isn't an indicator of success or the quality of your deck, however without a bunch of Tome Scours, or at least a Dampen Thought and an Eerie Procession, you simply won't be able to mill out your opponents.

Rather than simply win if you get several copies of a key card, you will often need to completely build your deck around that specific card to make the card any good.

But if you take all those Arcane spells in anticipation of getting a Dampen Thought, and the Dampen Thought never comes, then you are going to find yourself scrambling to put together a deck that's even remotely playable.

Kiln Fiend is another prime example of a single card that you can build your decks around, but if you don't get enough copies of it you can end up with some very schizophrenic draws. If you grab two Kiln Fiends in the first pack, and then draft assuming that you will get more ... but you don't end up with any more, then your deck could be pretty awkward.

If you pick up 3-4 copies of Kiln Fiend, you can put together an amazing Kiln Fiend deck that can close out games really fast.

If you only end up with 1-2 Kiln Fiends, they still might be good if you have a good amount of removal/rebound spells. However, if you didn't take the time or have the opportunity to pick up the right set of complementary cards, then you might find yourself needing to leave your instant and sorcery-loving 1/2s in the sideboard.

Obviously, the safest way to draft a Kiln Fiend deck, or a Dampen Thought deck is to wait and see if the right pieces fall into your lap. If so, then you can pounce on it and put together a pretty cool deck. If they don't, no big deal, you didn't waste too many, if any, relevant picks.

The problem is, if you take this passive stance you will rarely be able to put together that awesome Kiln Fiend or Dampen Thought deck. Instead, you need to put yourself out there and take some risks if you want that single card dependant deck to come together.

This means that it is often right to take that Kiln Fiend over an individually more powerful card, like a Rapacious One, in anticipation of being able to put together a powerhouse deck around the two mana 1/2.

Similarly, you might want to push those Prey's Vengeances and Distortion Strikes up in your pick order a bit to be able to take advantage of those Kiln Fiends, if you get them.

Or you might not want to. Going all in on a specific card is very risky, especially if the resulting deck is still fragile.

For a Dampen Thought deck, which is quite resilient once you have managed to successfully draft it, I'm willing to take some significant risks while I'm drafting. For a deck that's as fragile as a Kiln Fiend deck, I'm pretty unlikely to put myself out there too much until I'm at least into the second pack.

Some key cards act as enablers for a deck that would otherwise have trouble functioning. For example, Harrow helps an Invasion or Zendikar block five-color deck get the mana it needs to cast its spells. Without any Harrows, that five-color deck would still be able to function properly (sometimes), but it's clear that drawing even a single copy of the green mana-fixer would make a huge impact on any game that the five-color deck is involved in.

enabler. However, a level up deck's good draws become significantly better with Venerated Teacher, and there are many mediocre draws that actually become quite good once you've drawn the

Please note that Harrow and Venerated Teacher do very little on their own, they instead enable other cards to reach their full potential. So, while they are crucial to their respective archetypes (within their respective formats), you can't try to build a deck solely around them. Similarly, there's an upper limit to how many of them you want, and how much you are willing to pay for them.

If you already know that you're drafting a five-color deck, either because it's your preferred strategy or it's late enough in the draft that you know you don't have much of a choice, then the first Harrow is the most valuable one. You would correctly be willing to take it over even some of the most impressive cards in the set. The second copy of Harrow is almost as valuable. When you get to the third copy of Harrow, you can see its value beginning to drop. Sure, you will take that third copy of Harrow if you need it, but there are likely plenty of cards that you will take over it, especially if you think that there's a decent chance of you getting another Harrow later. And once you get to the fourth copy, you might not even want to take it.

If you think you might be, or aren't yet sure that you're drafting a five-color deck, then the first Harrow will have some value in that it can help you splash a third, or even a fourth color. The second Harrow will have significantly higher value (unless you've decided that it has no value for you because you are too solidly in a different archetype) in that it can open up more splashing possibilities to you. If you are still undecided about what type of deck you are drafting, then the third Harrow will often be even more valuable than the first two as it will solidly allow you to draft a four or five color deck without significant mana consistency issues.

Another, admittedly less sensational, enabler example is Overgrown Battlement. If you tried to put together a controlling red-green defender deck that ramps into huge Eldrazi creatures, but you didn't pick up any Overgrown Battlements, you're going to be aching. But, if you pick up a lot of copies of the 0/4 defender, your deck will be pretty fantastic. 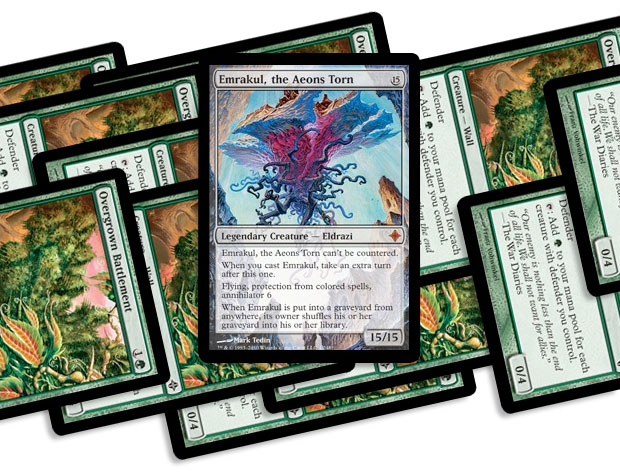 One fortunate upside that Overgrown Battlement has over many other linchpin cards is that it is still quite good even if you don't get the right set of complementary cards to go around it. Sure, it's at its best when you build your deck around it, but even if you don't it'll still be quite good for you.

So while you might not feel inclined to take Overgrown Battlement as early as you would take, say a Venerated Teacher, it will rarely, if ever, be a dead pick for you. And if your draft ends up being very defender heavy, those Overgrown Battlements might just be your ticket to the top of the mana curve.