Posted in Limited Information on October 18, 2011

f you draw and cast Bloodcrazed Neonate at the wrong time, it will do next to nothing.

If you're on the draw and you cast a second-turn Bloodcrazed Neonate, your opponent doesn't even need to cast anything that impressive to eat your 2/1 when it attacks. A Villagers of Estwald, a Selhoff Occultist, pretty much any white three-drop, a Riot Devils, or even an Ashmouth Hound will be enough to take out an incoming Bloodcrazed Neonate without losing even a single card.

And if you draw a Bloodcrazed Neonate late in the game, when the board is already cluttered, you probably won't even want to cast it, since it will just end up running headfirst into one of your opponent's many blockers.

If you don't have the right deck to support your Bloodcrazed Neonates, then you should not play them.

The fact that it will occasionally allow you to steal wins against an opponent with a particularly slow and/or mana starved draw is a pretty negligible upside given how often it will be a dead draw for you in your white-red evasion-based control deck.

You should be able to win those games where your opponent has an extremely slow draw with no removal anyway. And if you can't, then you have bigger problems on your hands than a single Bloodcrazed Neonate will be able to fix for you.

But if you have a bunch of cheap removal and/or other ways to allow your creatures to tiptoe past would be blockers, then Bloodcrazed Neonate can be an absolute all-star for you. If you're playing an aggressive deck and you're able to connect a couple of times early with a Bloodcrazed Neonate, you will have a huge lead that you shouldn't have much trouble capitalizing on.

I'm not usually a huge fan of Auras that enchant your creatures, since they set you up to get two-for-oned by opposing removal spells. But if you put a Spectral Flight on a Bloodcrazed Neonate, you'll have a 5/4 flier on turn three. Only Claustrophobia, Tribute to Hunger, Bonds of Faith, Rebuke, Ghostly Possession, Smite the Monstrous, or a well-timed Spidery Grasp are able to deal with this easily. So if your opponent isn't playing white, you shouldn't be afraid to shuffle up a Spectral Flight or two in your blue-red deck, particularly if you have a couple of Bloodcrazed Neonates.

When It Doesn't Fit

Sometimes you need to play cards that don't really belong in your deck, simply because you don't have any other options.

If you don't have any other one- or two-drops, then it can be completely reasonable to start (or at the very least sideboard in) a Bloodcrazed Neonate or two because they can force early trades and help you get to the mid to late game, where your deck should be able to thrive. The fact that it will be a virtually dead draw sometimes isn't something that you can afford to focus on if you just don't have any other options.

Similarly, if your opponent's deck is particularly slow and you're on the play, then you should almost certainly sideboard in any Bloodcrazed Neonates that you have sauntering around in your sideboard.

Even if you don't have the cards that you would normally want to have surrounding it, keep your eyes open for when Bloodcrazed Neonate can serve a crucial role for you. It can happen more often than you might think.

Bloodcrazed Neonate would have been noticeably weaker in Magic 2012 Limited than it is in Innistrad Limited. Not only was Magic 2012 Limited full of one-drops and two-drops that players would have been happy to trade with your bloodsucking 2/1s, but the existence of bloodthirst cards already incentivized people to go out of their way to block, trade, use removal spells early, and do pretty much everything within their power to keep themselves from taking damage.

In Innistrad Limited, you don't need to connect with your creatures to power up bloodthirst cards. Instead, you get to take advantage of the fact that you are playing with creatures with short life expectancies by loading up on morbid effects. Even if your Bloodcrazed Neonate dies at the hands of a bigger creature, you can still get something out of it.

While your opponent would normally raise an eyebrow if you attacked your 2/1 into a creature with 3+ toughness, if you've got a creature that must attack (and gets bigger whenever it isn't blocked), then your opponent is almost certainly going to block.

You can then use that opening to plop down a 5/5 Festerhide Boar, or to run out that Stitched Drake or Makeshift Mauler that could very easily have rotted away in your hand otherwise.

And if you curve out with Bloodcrazed Neonate into Crossway Vampire into Festerhide Boar, then your opponent is going to need to do something exceptionally strong to have any chance of keeping up with you.

If your opponent is trying to out-tempo you with Bloodcrazed Neonates, there's a lot that you can do to stop them. Provided you have the right sideboard cards handy.

For obvious reasons, cheap blockers like Selfless Cathar and particularly Typhoid Rats (which can stop a Bloodcrazed Neonate at any point in the game) are excellent cards to have on hand if you notice that your opponent has multiple Bloodcrazed Neonates in his or her deck.

After you do what you can to bring down your curve, you'll want to look for three- and four-drop spells that can immediately make their presence felt. Sure, Kessig Wolf is normally better than Riot Devils in most situations, but if your opponent's deck is full of 2/1s and 2/2s, then you would be better off just running out a 2/3.

Grave Bramble is a very underrated sideboard card. If I'm playing against an aggressive black-red deck, there aren't many cards that I would rather draw in my opening hand than this 3/4.

Even if your opponent is able to sneak in two hits with a Bloodcrazed Neonate—which can happen pretty easily if your opponent has cards like Crossway Vampire, Geistflame, and Silent Departure—your Grave Bramble will still be able to trade with it.

If your opponent is only able to get in one hit with Bloodcrazed Neonate, then a 3/4 body will be enough to stop it dead in its tracks and live to tell the tale.

It's pretty easy to imagine what kind of an impact Bloodcrazed Neonate will have if you draw it, and cast it, early.

Against opponents with no answers to it (or if you're able to trump all of their answers), your Bloodcrazed Neonate will deal a ton of damage, and grow to some enormous size. While it will sometimes singlehandedly win the game for you, Bloodcrazed Neonate is more likely to trade in combat, or suck up a removal spell, hopefully sneaking in a few points of damage and forcing your opponent to waste a bunch of time in the process. 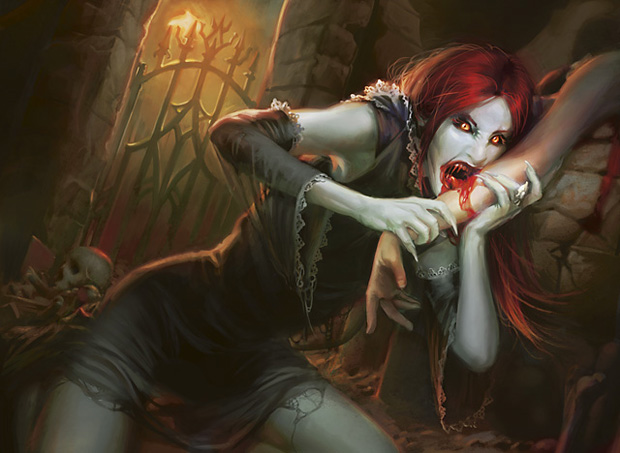 Limited games are often won by the person who has the last unanswered threat.

Sometimes this happens in a very flashy way, like when you deplete your opponent's supply of removal spells, then make short work of him or her with a Reaper from the Abyss (or some other similarly bombtastic rare). But other times, just having one more spell than your opponent, even if it's just a two-drop, can be enough for you to secure a victory.

If you can force a series of trades, and get the board (virtually) empty, then you will be able to force your opponent to spend a card to deal with your Bloodcrazed Neonate, or else see it turn into a formidable threat.

Alternatively, you can keep the board somewhat cluttered and wait until you draw your Nightbird's Clutches to force through a bunch of damage and get some good trades in. Even if you can't use Nightbird's Clutches to win the game outright for you, it lets you get additional mileage out of your other cards (like your Bloodcrazed Neonates that would otherwise be dead in your hand), and lets you put your opponent (who otherwise has a substantial on-board lead) on the defensive long enough for you to draw into a card (or cards) that you can use to finish the game.

Vampiric Fury is not an easy card to use. Even if you really want to draft a Vampire deck, there just aren't enough Vampires in the set for you to pull it off reliably.

Bloodcrazed Neonate, Vampire Interloper, and the rare Stormkirk Noble are the only Vampires that cost less than three, and even the more expensive Vampires are tough to find.

Sure, if you open on Vampire Interloper into Rakish Heir and your opponent doesn't have a way to stop you immediately, then you're probably going to win. And anytime you play Bloodcrazed Neonate, follow it up with a Crossway Vampire, then take out both of your opponent’s blockers with your Vampiric Fury, then you shouldn't have much trouble cruising to victory if you have even a little bit more action waiting in your hand.

But unless you have eight or more Vampires in your deck (and preferably something closer to ten), Vampiric Fury is going to be too much of a liability for you to include. Not only will you need to worry about what happens if your opponent has a removal spell to punish you for casting a pump spell, but you will also have to deal with the fact that you might not have any Vampires to enhance.

Posted in Limited Information on October 18, 2011