Some Questions You Should Be Asking

'm sure you both hear and ask yourself questions like these all the time when you play limited. Why am I sure? Because every one of these questions need to be answered in order for your game (or draft, or deck construction) to progress.

But these types of questions don't actually mean anything.

To put it in non-card terms, if someone asked you "Should I drop out of Harvard three weeks before graduation?" It would be very easy to say no immediately. But if the person is considering dropping out of school to star in Transformers 3, then the question becomes much more interesting.

These questions are questions about what you must choose to do, not why you should make decision A or decision B (or perhaps a non-obvious decision C).

In order to make proper decisions, you need to ask the right questions. So, instead of asking yourself "Should I Giant Growth here?" you should ask yourself things like "Is there a better time for me to cast this Giant Growth?" and "What happens if my opponent also has a trick?"

So join me for a stroll down Abstract Lane, and hopefully you'll see some new ways to look at game situations.

You're playing in the Booster Draft Top 8 of a Grand Prix–Boston Trial. The pack prizes don't really matter for you; ultimately you are just concerned with winning the event and getting those three coveted byes.

Knowing this, should you main-deck your Naturalize?

Maybe yes, maybe no. There's still a lot more that you need to ask yourself before you can make an educated decision.

The most obvious question to ask is "What would I be running this Naturalize over?" If the answer is something marginal (marginal within the context of your deck, that is), then you probably already have your answer.

If your deck is already really good against Esper, possibly sporting multiple Branching Bolts and a Vithian Renegades, then once again you probably already have your answer.

But if you have a normal deck that is neither particularly strong or weak against Esper and you have to choose between an unimpressive, but still relevant, card such as a Cylian Elf in a deck that's slightly lacking in early drops, or the Naturalize, then you've got a very interesting question on your hands.

You need to decide if it's worth having a card that might not be particularly relevant against most of your opponents, but will be excellent against your probable finals opponent, or a card that will always be mediocre. 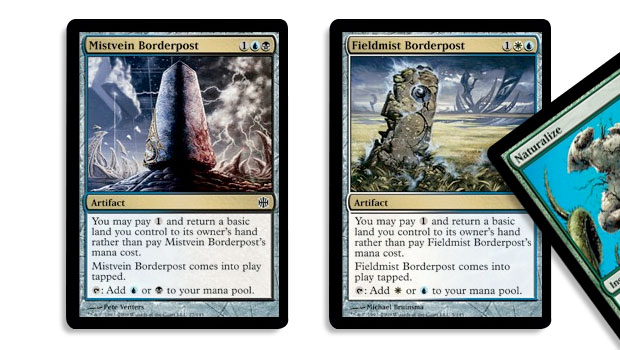 If you passed a lot of Borderposts, that might tip the balance in Naturalize's favor because it will have blowout potential against a good portion of your opponents (can you imagine how far behind your opponent would be if you Naturalized their Borderpost and then played a three-drop when they had a mere one land in play? Ouch!). If you get passed a ton of good Jund cards really late, that also might tip the balance in Naturalize's favor as it suggests that there are probably a number of blue and white drafters at the table, colors that are known for having above-average amounts of artifacts in Shards of Alara Block Limited.

But, if your deck has someone questionable mana, then that might tip the balance in Cylian Elf's favor, as you have a greater need for early drops that will help you get to the late game where your mana comes together and your superior card quality can lead you to victory.

"Should I Use my Giant Growth Here?" 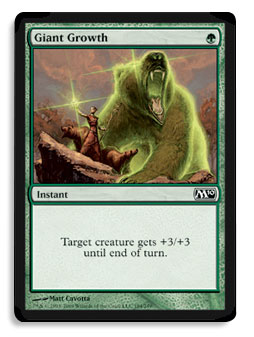 Whenever you are considering using a combat trick, you have to ask yourself "What's the worst thing that could happen?" and "Is it actually even that good for me if my opponent has nothing?"

If it turns out that you get destroyed if your opponent has a trick of his or her own, then there'd better be a pretty good reason why you're taking on all that additional risk. If it turns out that your risk outweighs your reward, then you shouldn't be using your combat trick in that spot. It's that simple.

Only it isn't. The hard part is calculating your risk and reward.

If you have two 2/2 creatures blocking a 5/4, then you would almost never want to use a Giant Growth even if you were almost positive that your opponent didn't have a trick of his or her own. 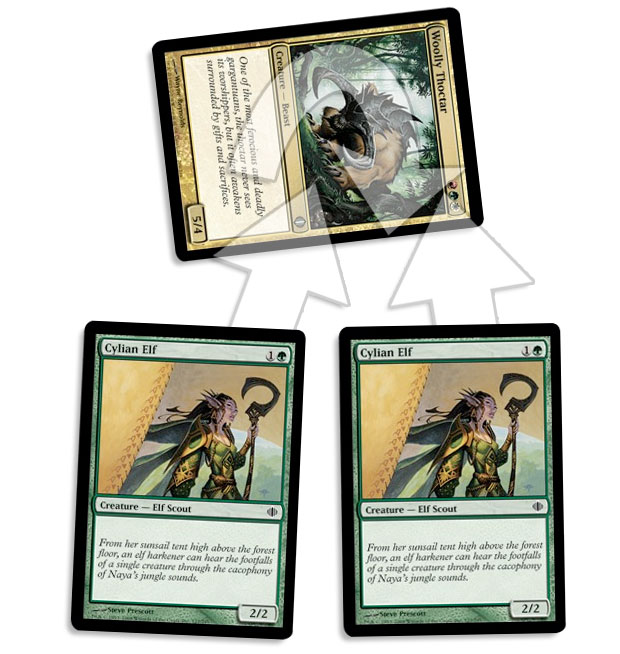 Because even if everything goes well, and your opponent does not have a trick to destroy you with, then it's not even clear that anything good has happened to you. In most mid- to late-game situations, a Giant Growth is worth more than a 2/2. So this is a clear example of a situation where the risk outweighs the reward.

In a situation like that you probably wouldn't have to spend much time thinking about whether or not you wanted to use a Giant Growth, but what if you're presented with a more difficult question? 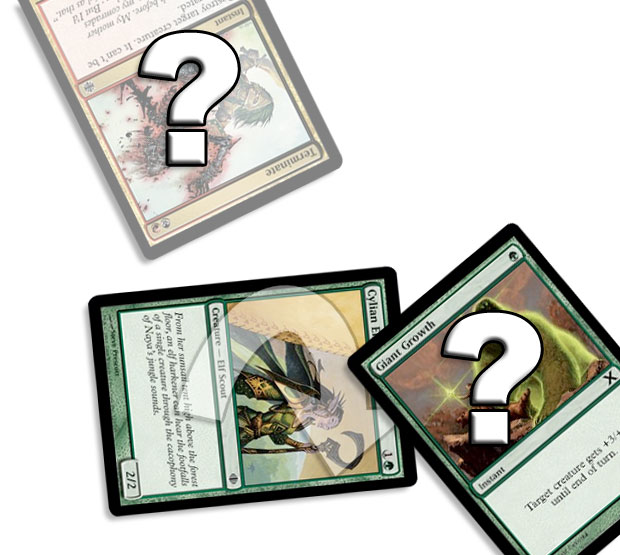 There's no one right answer to this type of question, especially when it's as abstract as the one that I've just posed.

The important thing in these types of situations is not what you do, so much as why you're doing it. If you think that your opponent is getting ready to cast a Predator Dragon that will immediately kill you, then you should probably take your chances with that Giant Growth. If you think that your opponent is sitting on next to nothing, but might have a removal spell, then you probably want to hold that Giant Growth.

But what if you have a 4/4 blocking your opponent's 4/4? Then you probably feel sufficiently incentivized to try and save your creature ....

Just be sure to think about these types of questions on a case-by-case basis.

"Should I Take the Terror or the Pacifism First Pick, First Pack?"

Interestingly enough, this question is a lot harder to address in the abstract than most game decision questions. Terror and Pacifism are both premium removal spells. In most formats there is very little quality difference between the two of them. Instead you have to make your decision based on the contents of the pack and personal preference.

If you have a strong preference for drafting either white or black, and the pack isn't particularly heavy in the color that you prefer, then you should just follow your preference.

Let's say you don't really have any preference between the two (your preferred decks to draft might be blue-white and blue-black) then you should look at the pack to know which way you should go with your pick. Pay particular attention to what the third best card in the pack is. If the third best card in the pack is white, then you should almost certainly take the Terror as it's likely that the person two to your left will take the other white card.

But without a clear indicator, this pick could definitely go either way. But even when it's this close, just make sure you know why you're taking what you're taking.

One of the most important questions you can ever ask yourself is "Why would my opponent do that?" This question is particularly important if your opponent has made a play that makes him or her particularly vulnerable. Now, the answer to the question could be "My opponent screwed up." Or "My opponent didn't think I had XYZ." Or it could be "because my opponent has exactly the card that will destroy me here if I make the obvious play and he or she is trying to lure me into doing just that."

I'll come back to the idea of orchestrating plays soon, but you should always be sure to ask "Why would my opponent do that?"

Focus on What Really Matters

You can take your analysis of a Magic question to pretty much any level, but that doesn't mean you should.

If you had an unlimited amount of time to break down each of your decisions, you would probably be able to figure out the plays that have the highest expected payout at every step of the way.

In tournaments there are strict time limits that prevent people from being able to run through every permutation in their head, so you don't have the time to work out every situation perfectly. And even if you're just playing a casual game with your friend, if you spend 2 minutes trying to figure out each and every one of your plays, your friend is probably going to start looking for someone else to play with.

What you have to do is figure out what really matters, and then act appropriately.

Let's say you took the Pacifism instead of the Terror because there were more playable black cards than white cards in the pack. Then you would probably have made a mistake because you had thought that what mattered was how many people at the table would be encouraged to draft a certain color by your pack. When what really matters in this situation is what your immediate neighbors are likely to do.

If anything, a depth of black cards in the pack is a good thing as it means that you might get one of them when the pack comes back 9th pick.

Honing your Reflexes and Thinking about Them

With enough experience, you will be able to answer many of these questions automatically. For example, when combat damage went on the stack, you would know without blinking that the best time to sacrifice creatures to your Scarland Thrinax would be after damage stacked and right before they were going to die.

But not always. Sometimes there are much better plays, such as sacrificing all of your other creatures before damage to kill your tapped-out opponent.

Be careful not to rely on your instincts too much. If you do, you could easily slip into autopilot mode. And if you're on autopilot, you're going to find yourself asking the wrong questions a lot.