Speed and the Gs

Posted in Limited Information on November 21, 2012

hile I was interviewing Brian Kibler at Grand Prix Chicago, he explained that in Modern (and in most Constructed formats, for that matter) you want to do things that are slightly slower or a lot faster than what your opponents are doing.

But if your cards aren't inherently advantaged against the cards your opponents are playing, being slightly slower than your opponents can be a virtual death sentence.

In Constructed, you can choose exactly how many removal spells you want to play—but in Limited, you have to cherish every Stab Wound, Arrest, and Annihilating Fire you're able to get your hands on.

Thus, if you fall behind, you'll often be forced to use your premium removal spells on some of your opponent's cheapest creatures so you can preserve your (rapidly dwindling) life total. And when that happens, you're likely to find yourself without an answer for whatever game-breaking rare or evasion creature your opponent's curve tops out with.

And while you can fill your Modern decks with creatures like Kitchen Finks and Baneslayer Angel that will regularly go over the top of Kird Apes and Qasali Pridemages—in Limited, there's no guarantee your relatively expensive creatures will be able to do anything more than trade with your opponent's Gore-House Chainwalkers and Rakdos Cacklers.

If you are playing 2/3s and 4/4s while your opponent is playing 2/1s and 3/3s, you should be in a pretty good spot (assuming you also have ways to eventually go over the top of your opponent and a way to mitigate the effectiveness of your opponent's finishers). But if you need to wait until you get to five mana before you can play a card that can best a Splatter Thug or a Call of the Conclave token in combat, you're going to find yourself struggling.

Despite the fact that there are a lot of individually strong cards in Golgari, it can be very difficult to draft a competitive black-green deck. Yes, if you're playing against a relatively slow deck that doesn't have very many game-breaking cards, your Golgari deck should perform wonderfully for you (as long as you have a few scavenge creatures to help you go over the top).

But relatively slow, bomb-light decks are the only type of matchup that non-synergistic Golgari decks tend to have an advantage in.

If you're unable to catch up to your aggressive opponents and you can't match the raw power that the more controlling decks in the format present, the fact that you can beat up on slower Izzet and Selesnya decks won't lead to all that many wins.

So what do you have to do to make your Golgari deck good enough to compete with the other guilds?

Make sure your deck has a plan!

When the Return to Ravnica Booster Draft format was still in its infancy, I hoped/assumed that five-color control decks would be a force to be reckoned with. I was very wrong.

The fact that four- and five-color control is so difficult to draft successfully has forced the archetype into obscurity. Consequently, once-coveted cards like Axebane Guardian and Gatecreeper Vine can now be seen quite late in packs...

...finally opening up the opportunity for well-prepared players to succeed with base-green control decks!

Now that Axebane Guardians and Gatecreeper Vines are readily obtainable, you can draft defender-heavy Golgari decks that lean heavily on Ogre Jailbreakers and Trestle Trolls.

If your deck is on the slower side, you're still going to want to snag a few cheap creatures like Brushstrider, Drudge Beetle, Daggerdrome Imp, and Tavern Swindler so you don't take too much damage early. (Note that while Grim Roustabout can play a key role in this style of deck, acting as a roadblock for your opponent's biggest threat or as an extremely tough-to-kill attacker should you scavenge some +1/+1 counters onto it, you shouldn't expect it to help your early defenses too much).

When your deck has a tough time racing people (as many slower controlling decks do) it becomes extremely important to include several ways to stop your opponent's evasive threats. If you don't get very many Trestle Trolls, you're going to need to prioritize cards like Towering Indrik, that can stop Lyev Skyknight and Vassal Soul dead in their tracks. Without these answers, you're going to die in the air a lot more frequently than a player ever should.

While this style of deck can be extremely potent when it comes together, it requires you to get quite a few copies of specific cards like Axebane Guardian, Trestle Troll, and Ogre Jailbreaker—as well as a game-breaking bomb or two that will allow you to actually win drawn-out games.

So if you aren't seeing any of the defenders this deck needs to function properly come around late, you should probably look to take your deck in a different direction.

Because if you don't get the pieces you need, your deck is probably going to be a mess.

Having an abundance of contextually marginal things that you can do late will allow you to attrition your way past slower foes, but that's about it.

Many Golgari decks fail because they lack relevant plays in the early game AND the late game. So while Golgari decks will often have a ton of things that they can do one they get a bunch of lands into play, their options are often underwhelming compared to what their opponents can do.

Relying on mana-intensive cards like Korozda Monitor to generate your advantages for you just isn't a winning proposition most of the time.

If you load up on cards like Dryad Militant, Rakdos Cackler, Drudge Beetle, and Thrill-Kill Assassin for the early parts of your curve—and you're able to back them up with Giant Growths, Stab Wounds, Golgari Decoys, and even Korozda Monitors—your deck is going to be very strong.

In order for your aggressive Golgari deck to work, you need to prioritize:

Stab Wound and Ultimate Price should get drafted above everything short of the best bombs in this style of deck.

(Assassin's Strike, for example, is too slow to spend a particularly early pick on in this deck—particularly as you should have scavenge creatures you will want to sink mana into late.)

Korozda Guildmage– and Dreg Mangler–type cards are effective enough to outshine any non-Stab Wound common that you might find next to it.

So while a bomb rare like Corpsejack Menace could certainly take priority, barring anything exceptional you would do very well to pick up this type of exceptional uncommon.

After removal spells and the best creatures, you (generally) want to take Giant Growth and Chorus of Might. Without these tricks, you're just going to end up playing a creature-heavy deck that's waiting to get crushed by whatever big cards your opponent happens to have.

While Drudge Beetle– and Dead Reveler–type cards will be able to easily outshine a lot of the competition, you should still be happy to pick up things like Tavern Swindler. Getting up to six or seven one- and two-mana creatures is crucial, particularly if you have a lot of scavenge cards that will tie up your mana late.

So while I tend to prefer to draft Rakdos or Selesnya decks, if I notice myself getting passed things like fourth-pick Dreg Manglers, fifth-pick Golgari Decoys, and sixth-pick Sluiceway Scorpions, I'll have no problem moving into black-green beatdown. 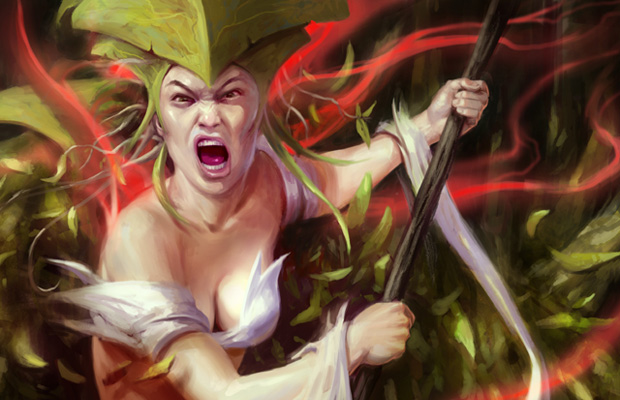 All right, now I'm going to let you in on a guilty pleasure of mine: I love drafting Gruul.

While I'm confident there are a lot of times when it is correct to draft Boros or Orzhov in Return to Ravnica Limited, it's pretty rare that the best thing that you can do is to move into red-green.

Unless a lot of things fall into place in exactly the right ways, red-green decks are just going to be worse than the Izzet, Rakdos, Golgari, or Selesnya decks that could have been drafted in those same spots.

But just because it's rare that you'll be able to put it together doesn't mean you should completely ignore the possibility of drafting an aggressive Gruul deck.

Gore-House Chainwalkers and Splatter Thugs backed up by Giant Growths can be very tough to keep up with. Even Hussar Patrol, which is normally a great card against aggressive decks, can get easily blasted away if you have enough pump spells.

Your priorities when you're drafting Gruul should be very similar to those for Golgari aggro, but with two key differences:

One-drops and Chorus of Might are absolutely necessary for the deck to succeed.

High-quality one-drops like Rakdos Cackler and Dryad Militant are invaluable in Gruul, and even the much-maligned Bellows Lizard is a must-have. Without a couple of one-drops, your deck is just going to be too slow (and underpowered) most of the time.

The fact that Bellows Lizard gives you an extra body for Chorus of Might, and it can trade with just about anything your opponent can reasonably present (if you're willing to invest an entire turn's worth of mana into it), makes Bellows Lizard a more-than-reasonable inclusion. After all, it's perfectly all right to spend your fourth or fifth turn pumping up your Bellows Lizard to the point where it will trade in combat with your opponent's four-drop, particularly if you already have a lead on board.

Giant Growth effects in general, and Chorus of Might in particular, shine in fast Gruul decks. If you get enough cheap creatures and two or three copies of Chorus of Might, your deck will end up being extremely potent.

However, if you don't get the Chorus of Mights, or three or more Giant Growths and a couple of Traitorous Instincts, you very well may end up with a deck that's unable to win a match...

When you get to the third pack, you can't be concerned about how good the cards you're passing are. You just need to do what you can to ensure that your deck actually has what it takes to win.

Posted in Limited Information on November 21, 2012