Speed of the Format

very time a new set is released, there are questions that burn to be answered. One of the most consistent and important queries revolves around the speed of the format. This doesn't mean how fast it goes by, nor does it refer to how fast it sells. We are talking about how aggressive the format is. How many turns do I get to live before I can expect to be attacked for lethal damage?

Is Magic 2014 Core Set a fast format? What is at the core of this question, and how do we figure out the answer? I'd like to take a look at what dictates the speed of a format this week, using Magic 2014 as the test case.

Zendikar and Magic 2012 were considered fast formats. Rise of the Eldrazi and Innistrad were not. The speed difference between Gatecrash and full-block Return to Ravnica Draft was noticeable. 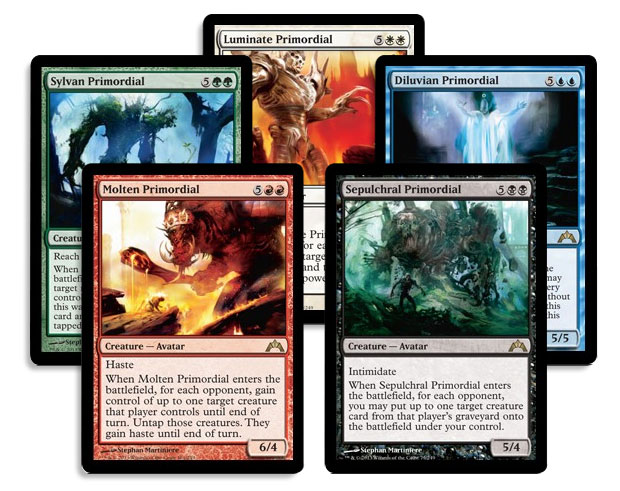 
These seven-drops were rarely played in Gatecrash Draft. But once we hit full block, they started popping up—and getting picked much earlier in the Gatecrash pack.

What is going on here? Generally speaking, a fast format is one where the game is capable of ending consistently earlier than in a slow format. This changes what our expectations are for every scenario. In a slow format, we may expect to resolve seven-mana spells. In a faster format, we may not dare dream of such a thing.

Figuring out how fast a format plays is part art and part science. After a few matches of a given format, you will already start to develop a sense for how fast it feels. Did you feel under pressure? Were you able to diffuse the threats that were presented to you? This picture will start forming from the early stages of a format.

We must be wary of jumping to conclusions too quickly, however. Many times, a format is just "normal" speed, meaning it's not a super-slow or super-quick format. Yet our first impressions may tell us otherwise if we happen to run into (or even be playing) a deck that represents the exception to the format.

The fastest viable deck that people can consistently draft defines most formats. For a few recent examples, look at Boros in Gatecrash and Rakdos in Return to Ravnica. These were the fastest options that were successfully drafted in the format. You could build a slow, do-nothing deck, but you knew that if you ran into either of these decks, you were toast.

Most of the decks people consider to be fast are based on commons. These are simply the cards that are most often in a deck, and the commons (and to a point, the uncommons) really do dictate the speed of a given format.

Some formats are just quick in general. Is Magic 2014 one of those? Let's take a deeper look.

My hypothesis is that Magic 2014 is not a particularly fast format. This is based on a few tournaments' worth of anecdotal data procured by yours truly. I currently have no hard data to back up my hypothesis, nor do I have a reasonable sample size of matches from which to work. But I just feel that it's slow.

It will take more experience before I know for sure, but in the meantime we can dip our toe in the water and produce some data to help guide us.

I searched up the two-drop common creatures in Magic 2014, to see what the landscape looks like. What I found is that the two-drops from this set are largely non-aggressive. Let's have a look: 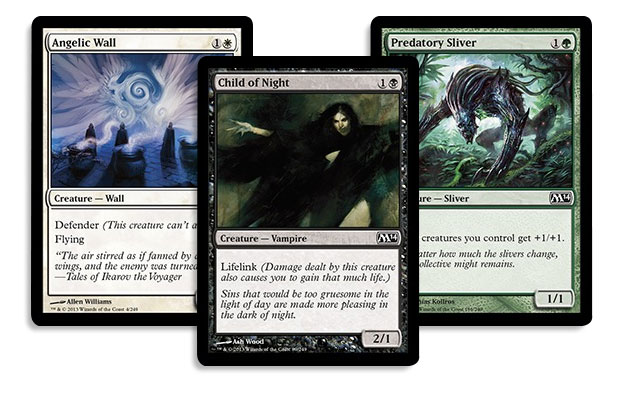 Click to see all of the common two-drops from M14

While Child of Night, Coral Merfolk, Predatory Sliver, and Sentinel Sliver are all reasonable two-drops for an aggressive deck, none of them have any form of evasion. The creatures here with evasion? Seacoast Drake, Dragon Hatchling, and Angelic Wall have a combined 1 power. Deadly Recluse and Capashen Knight are better defenders than they are attackers.

Corpse Hauler and Goblin Shortcutter are the only two cards that are proud to be aggressors.

That's not saying much. Let's look at some of the common two-drops from the notoriously fast Zendikar format for contrast: 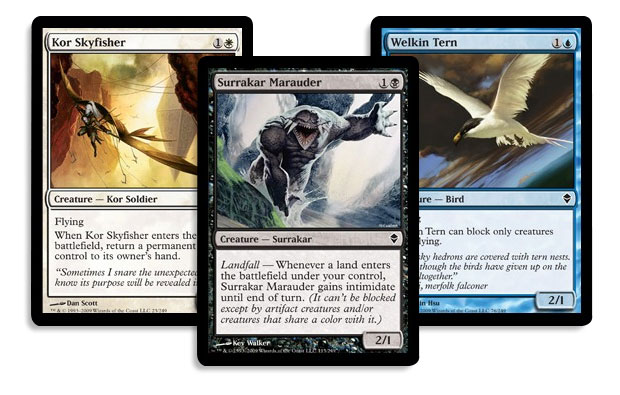 Click to see all of the common two-drops from Zendikar

Now that is a rag-tag bunch of misfits. Heck, most of them are terrible blockers and really good attackers, further prompting their owners to send them into the red zone over and over again.

Let's tick up the scale a bit and see how the three-drops are for Magic 2014: 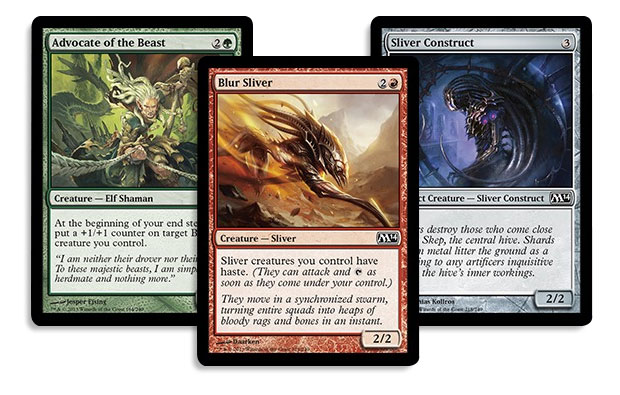 These are a little more aggressive. We see Advocate of the Beast, Blur Sliver, Master of Diversion, Regathan Firecat, Rootwalla, Trained Condor, and Undead Minotaur as reasonable attackers on turn three. Still, there isn't much that jumps off the page for the aggro strategy. Master of Diversion is the most clearly aggressive card, as it begs you to attack turn after turn.

Once we hit the four-drops, we start to see some real attackers: 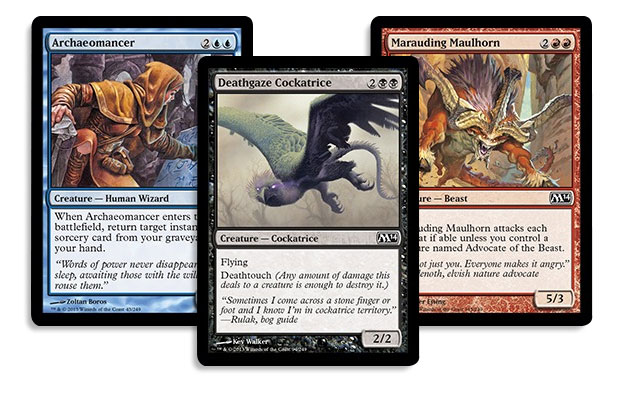 The five-drops are even less aggressive, with none of the commons registering more than a meager 3 power. I decided to add up the power and toughness for the five-drops to illustrate where this format is:

Another thing I noticed: zero of the common five-drops have greater power than they do toughness.

I wouldn't say that the common creatures at these various spots on the curve bring any type of conclusion to the table, but reading between the lines is pretty simple. The signs are all pointing toward a slower format.

Even if the common creatures aren't that aggressive, there is another side of the coin to examine before we can start coming to some reasonable conclusions. Namely, the removal in the format.

Removal seems to have gotten worse and worse recently, which in turn has made the sets better and better for Limited. It turns out that making removal more conditional, and more expensive, makes for some exciting games of Magic. If it were all just Doom Blades (now moved to uncommon), Lightning Bolts, and Path to Exiles, the game would become simpler. In the world of Celestial Flare, Liturgy of Blood, and Shock, creatures are allowed to hang around a bit longer. This means that they have more time to block, and to give their owner more time to set up a long-term game plan. 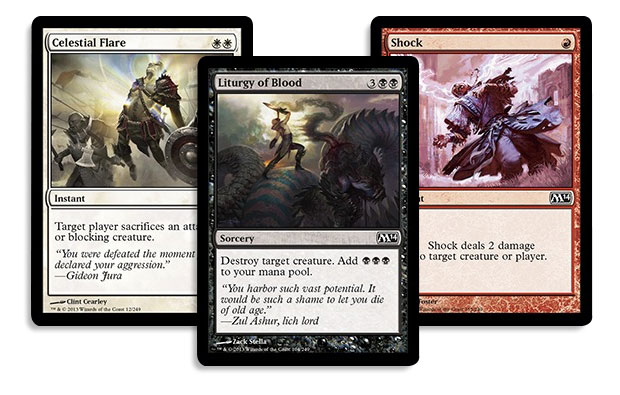 If the removal was markedly better in this format than in other recent formats, that could change how the matches play out. The removal in this set ranges from quite good to passable, however. I think that the removal suite in Magic 2014 represents the new look for removal suites. It has a few nice, cheap options, but overall is more expensive and clunky than some of the options we have had in the past.

So is there a viable aggressive deck in this format? Probably. If I had to guess which it will be, I would guess the Slivers deck. If you can assemble a bunch of mini-Voltrons on the battlefield in a short period of time, it's going to be pretty difficult to beat. The sheer linear synergy that the Sliver strategy offers makes it more powerful—and faster—than a normal deck can keep up with.

The downside of Slivers is that you need critical mass of them in the deck, you need the right ones, and you need the fixing to support at least a third-color splash.

While there may be an aggressive deck to be had here, the evidence is showing that the format as a whole looks pretty slow. This means that six- and seven-drops would be back in contention for resolution. I know that I prefer slower formats to faster ones, so I hope this stays in the same vein that we have become accustomed to from recent sets.

We will all have to keep an eye on this as we enter our journey into another sweet Limited format.