State of the Block

fter Pro Tour Journey into Nyx , I spent the week in Atlanta to cover Grand Prix Atlanta, which took place on the weekend following the Pro Tour. The Grand Prix was a Limited event, featuring both full Theros block Sealed Deck and Draft. The Pro Tour featured two full block drafts. That's a heck of a lot of Limited for back-to-back weekends, and I got to watch all of it.

I also did a fair bit of drafting myself during the week. After talking with a bunch of pros, watching a ton of high-level Limited Magic, and playing a lot myself, I learned quite a bit about this format.

Full three-set blocks can be the most difficult and interesting formats to draft because they reward prior knowledge of the sets. If you know that all the good white cards come in the last pack, for example, you can take mediocre white cards in packs one and two in order to set up the big payoff in the third pack.

Theros block is no exception to this line of thinking. Just as important as which colors are represented in which packs is knowing which packs are stronger overall. 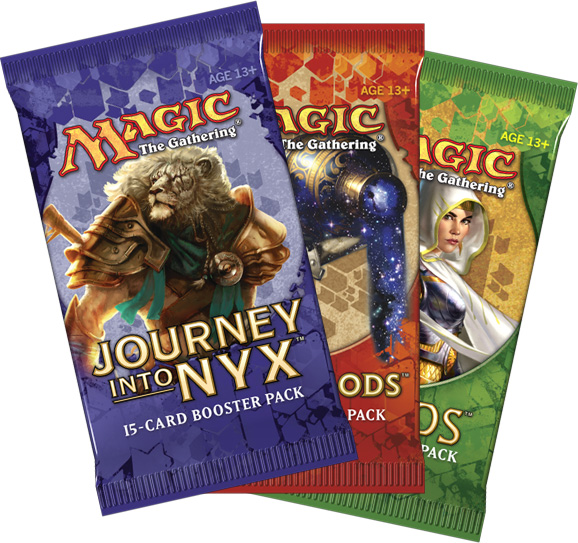 In this block, the Theros pack is the strongest of the three. The density of high-quality common bestow creatures is a big factor here.

Second place on the power chart goes to Journey into Nyx, followed by Born of the Gods. Journey into Nyx has no bestow creatures at common, but makes up for it with quality removal for reasonable prices, plus some powerful non-rares. Born of the Gods is particularly strong in red, but, overall, isn't at the same level as the other two packs.

Don't panic if your deck isn't amazing through the second pack. Theros offers the highest power of the three packs and will aid nicely in filling in your needs.

Green-Blue is the best deck in the format.

With an impressive suite of both creatures and bounce spells, the green-blue archetype readily deploys huge threats and keeps the opponent wavering long enough to beat down with them. A relatively solid density of playables in all three packs helps as well.

The thing that puts this deck over the top is its access to mana acceleration creatures: 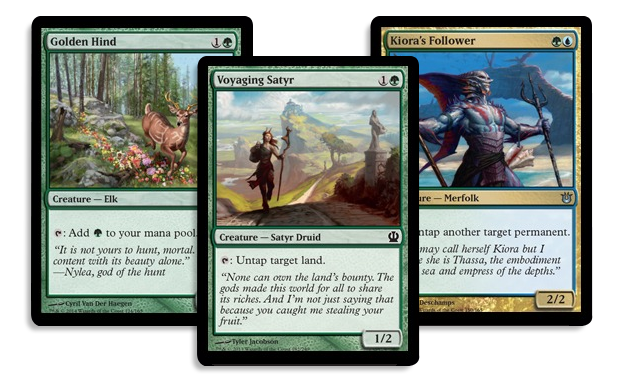 Many consider Golden Hind (Llanowar Elk? Elfmer?) the best common in Journey into Nyx, and for good reason: the ability to ramp in this format is particularly strong. Both Voyaging Satyr and Kiora's Follower fill this same role.

Ramp is so strong on the plane of Theros mainly because you always seem to have something to do with that extra mana. Whether it's paying for monstrosity or bestowing something big, the mana gets used. Additionally, in this color combo, the five-mana slot is particularly dense with solid cards. 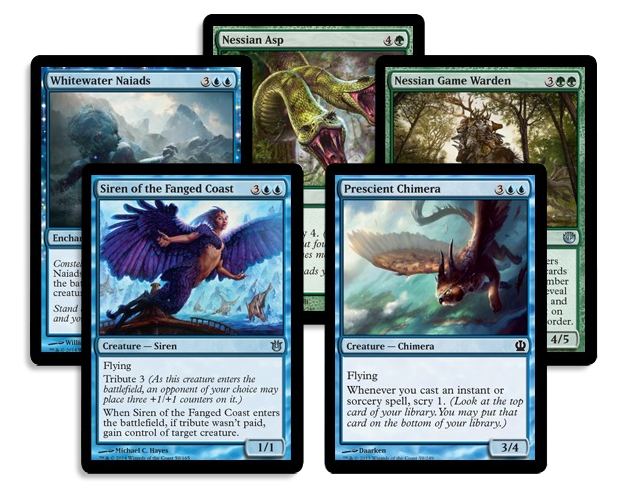 There are even more five-drops around, but these highlight some of the better options.

We should also talk about those bounce spells. 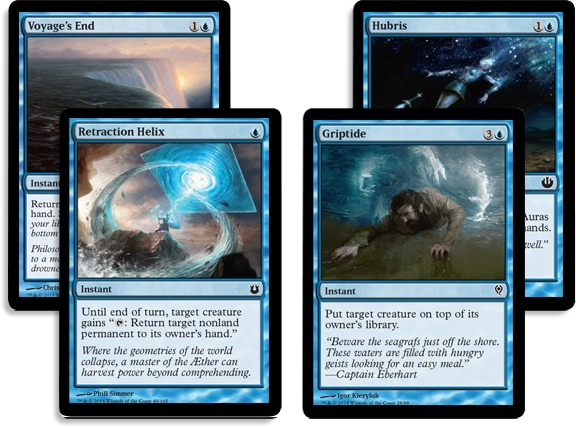 Bounce spells have not been this good, historically. Being able to break up your opponent's huge bestow battle cruiser, reset his or her early heroic creature, or punish your opponent for a poorly timed monstrosity activation is huge. Voyage's End is still my favorite of this bunch, and I have found Hubris to be more difficult to use to maximum effect. It's common to have to use a Hubris on a creature running an Aura you'd rather not your opponent get back into his or her hand.

Holding Out for a Hero Till the Morning Light

While, as you can tell, I'm pretty high on blue and green, it turns out that both the Pro Tour and Grand Prix showed us that white-based aggressive decks are still good. They have been since triple-Theros, and it looks like the power of heroic will keep these decks around for the duration of the format.

Interestingly, white can now be paired with any of the other colors to make a good aggressive deck. White-blue and red-white are your primary options, but with a healthy dose of green-white thrown in there for good measure.

White provides the heroic creatures, combat tricks, and two-drops, while the secondary color provides support with removal and more tricks.

For example, the red version has access to these excellent removal spells: 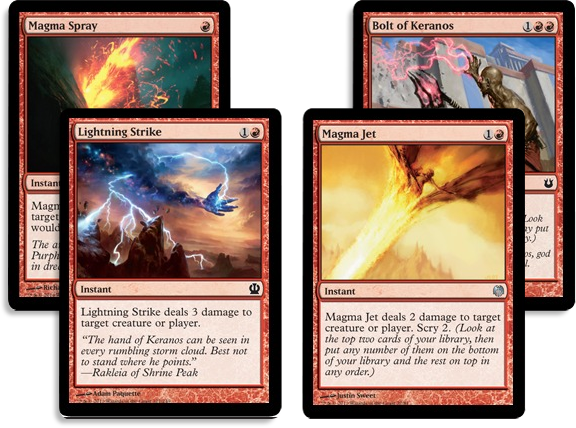 But everyone knows about red-white. Let's instead take a closer look at the newest kid on the white-based aggro block; white-black. This deck has really come into its own, thanks in large part to the addition of some sweet new spells from Journey into Nyx. Traditionally, this color combo played more like a grindy control deck than an aggressive deck. Journey into Nyx brought some interesting pushes toward the aggressive end of things.

Cast into Darkness has consistently impressed me. Considering it's a black card, it does a darn good impression of Pacifism. For just two mana, you can effectively remove a small creature. If you are the assertive version of this deck, the tempo gain from playing Cast into Darkness can be devastating.

Oppressive Rays, on the other hand, almost requires being used in an aggressive deck. It can lose its luster later in the game. A somewhat hidden use of Oppressive Rays is to put it on a utility creature like an early mana-ramp creature mentioned above. If your opponent has to tap three mana just to be able to make one mana, you have effectively taken that ability from it. Not bad.

Gnarled Scarhide is a fairly obvious inclusion for an aggressive deck playing black. Don't forget, you can bestow it upon your opponent's creature to prevent it from blocking if needed. Its primary role, though, is to beat down in the early stages of the game or to punch through extra damage with bestow on your own creatures.

White-black has nice options for reach as well, with Scholar of Athreos leading that charge as always. Scholar has become one of the best cards in the whole block, and it plays nicely in control and aggro at the same time.

After seeing the sweet red commons in Born of the Gods, I predicted that blue-red would rise from relative obscurity to a playable archetype in this format.

That kind of never happened.

It did improve, but not enough to elevate it to the kind of deck you don't want to see from your opponent.

Now I'm back on the bandwagon again, and I think blue-red may actually be good this time around. 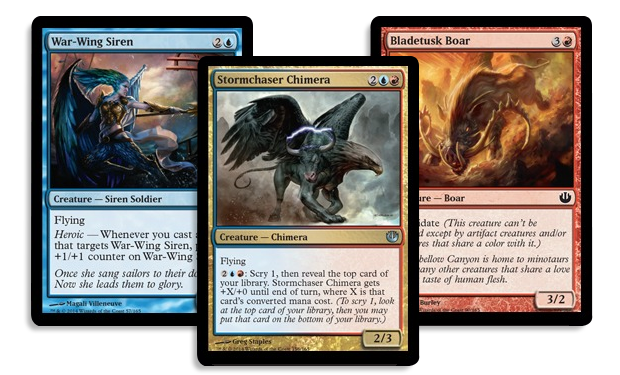 War-Wing Siren does a reasonable impression of Wingsteed Rider. Clearly not as good in the early stages of the game, it makes up for that in the later stages after it's picked up a counter or two.

Bladetusk Boar is one of the better four-drops for this deck. It's evasive and powerful, and capable of putting away a stalled-out game in short order. In fact, Bladetusk Boar is so annoying to play against, I have been taking Bronze Sable higher than I ever have just so I have an answer for it.

Stormchaser Chimera is a great uncommon addition to this archetype. Gold cards can make or break a two-color archetype, and this one does not disappoint. Once it's on the battlefield, it starts sculpting future turns while beating down for Dragon-like power numbers in the air. You can often pick up this card late, too.

Of course, this deck also gets access to all that sweet red burn and blue bounce floating around this block. It means that if you can set up a decent damage clock, you can almost always keep your opponent off balance long enough to let that clock win. Burn spells take out small and medium threats while bounce spells keep the big blockers out of the way long enough to find victory. (Bladetusk Boar is a fine choice for a clock, for example.)

We are still letting the pieces fall into place for the big picture on this format, but with this many drafts under our collective belts, things are starting to clarify. The thing I appreciate most about Journey into Nyx is that it actually changed the format.

Born of the Gods didn't seem to change things all that much, but the most recent set certainly has. It's time to think wider instead of taller.

The days of the bestow battle cruiser may not be fully behind us, but they are certainly lessened dramatically. It may be time for a slower, more controlling build to step it up and take ahold of this format.