Staying Flexible (Or Not)

Posted in Limited Information on April 12, 2011 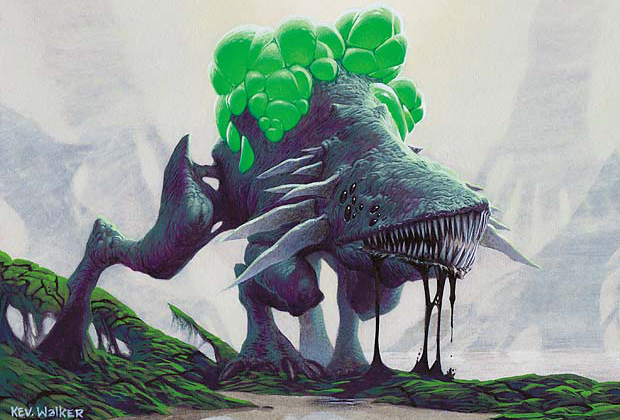 When I am drafting stubbornly I usually know what I want my deck to look like before I even start the draft, or within two or three picks. While I might have to go in a different direction than I had originally intended if things don't go the way that I was planning at the onset of the draft, my decision to deviate will only be in reaction to something significant. I might switch because I have gotten cut off in a color, because I got passed something excellent (or several excellent somethings) in a different color or for a different archetype, or because I was simply unable to acquire key components for the deck that I was trying to put together.

It is easiest to get rewarded for a stubborn approach when I am pursuing a strategy that relies on a number of cards that are seriously undervalued, or otherwise insignificant in most decks, but quite good when played alongside other unappreciated cards. If the cards, or even the color(s), that I am looking for are commonly dismissed, then I will have no problem going out of my way from the beginning of the draft to put that deck together.

I don't have any good examples of strategies that I am willing to force right now. I draft a lot of green in Mirrodin Besieged / Scars of Mirrodin Limited, but I won't go that far out of my way to draft it. I just feel that green is consistently underdrafted, and because I am more than willing to fill my deck with Forests and dinosaurs, I end up with Alpha Tyrranaxes in a good percentage of my decks. But there have been plenty of times in the past when I would regularly force a strategy for fun and profit. 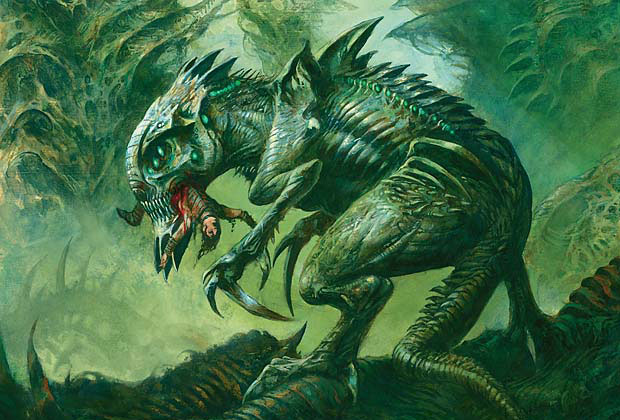 Immediately following the release of Scars of Mirrodin, I would force metalcraft in most of my drafts. It was easy to grab a bunch of Spellbombs, Accorder's Shields, Sylvok Lifestaffs, and other cheap artifacts during the first few weeks of Scars of Mirrodin Limited, so I was able to put the deck together at will. By taking key metalcraft cards early and completely ignoring infect, I was able to regularly put together pretty fantastic artifact-heavy decks.

It didn't take long until players began to properly value, and in some cases drastically overvalue, the metalcraft role players. Once this happened, I was no longer able to blindly draft metalcraft and expect to end up with a high quality deck.

You need to draft with the final product in mind. If you just take the best card on-color out of every pack, more often than not you are going to end up with a messy pile of good cards, and a whole bunch of really big problems (maybe they'll be curve problems, maybe you won't have a good way to kill your opponent, or a good way to stop evasion creatures, or...).

When you are forcing a strategy, you should know, roughly, what you want your final 40 to look like. You will be able to work towards that final product with absolute certainty, only straying under dire circumstances or when an amazing opportunity presents itself to you. 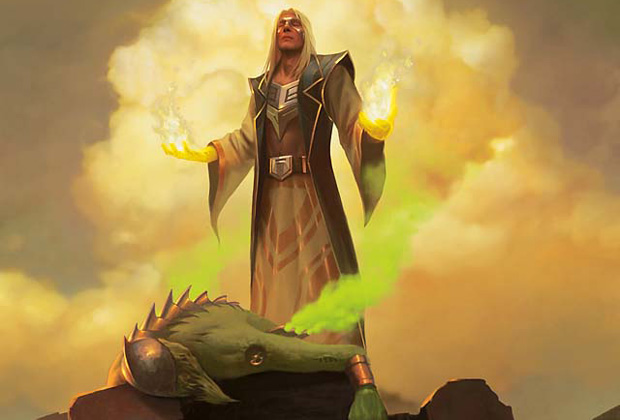 But when you are taking a less extreme approach, you need to make sure that you are actually working towards a real deck that can beat real opponents, and not just a collection of good cards that your neighbors wish they had in their decks.

Sometimes I will keep myself extremely open during the early stages of the draft, not committing to anything for as long as humanly possible. I've started a number of Mirrodin Besieged / Scars of Mirrodin drafts off with five different colors of cards in my first five picks. While I have had to scrape around for the last few cards to fill out my deck in most of these drafts, the decks themselves actually tended to be quite good, as I was able to take advantage of any really good opportunities that presented themselves to me.

When I delay my decision to commit for as long as possible, I do that with the understanding that I am going to have to make every one of my picks count, in a really big way, when I do begin to commit to a strategy, or when I begin straddling a finite number of strategies.

When I am leaving myself open, I will get to the synergy-seeking stage later in the draft than I would if I were able to start my draft off with a clear plan (two Leonin Skyhunters, three creatures with infect, or whatnot).

I will sometimes find myself in situations where I am forced to stay extremely flexible during the early stages of a draft. More frequently, however, I will craft a preliminary plan during the first few picks of the draft, and then I will adjust as necessary as the draft progresses. If I start my draft with two Leonin Skyhunters and a Copper Carapace, then I will want to draft an aggressive white deck. Depending on what I've seen/passed so far, I would either plan on going red-white, going white-blue, or just drafting white cards for as long as possible—not making a decision on a second color until I get a very strong signal, or until I open or get passed a particularly powerful card in another color. 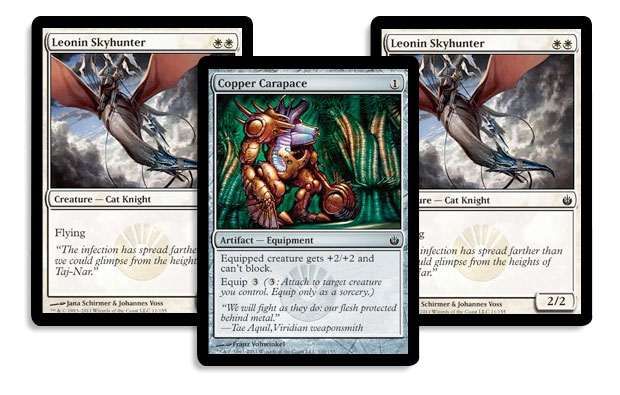 Because you are drafting with the final product in mind, it is important to draft cards that complement one another. However, you should be careful not to close off too many potential directions early on. Priests of Norn, for example, can fit nicely into infect decks, control decks, and white-X evasion decks.

So while you might think that you are drafting a white-X evasion deck or an aggressive deck when you start your draft off with two Leonin Skyhunters and a Copper Carapace, if you then pick up a number of primarily defensive cards and/or utility cards like Priests of Norn and Brass Squire, you should be aware that you are on the path towards an evasion deck or a control deck, even if you still really want to draft something extremely aggressive.

If that aggressive deck doesn't come together, but you manage to get a game-breaking late-game card or two in your Scars of Mirrodin packs, then you might be able to pick up some good, but underappreciated, controlling cards such as Loxodon Wayfarer late and end up with a good control deck.

When you use late picks to help you towards alternate archetypes, you can straddle multiple strategies at little cost. So instead of ending up with a fundamentally flawed aggressive deck, you might end up with a very solid control deck. 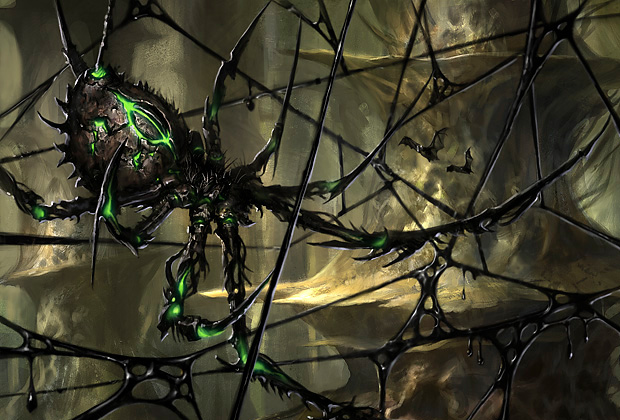 That's a question that Brian David-Marshall (@top8games) posed on Twitter a couple of weeks ago. The first chunk of responses came out in favor of Flesh-Eater Imp, but none of the responders had a substantial argument to support their decision. 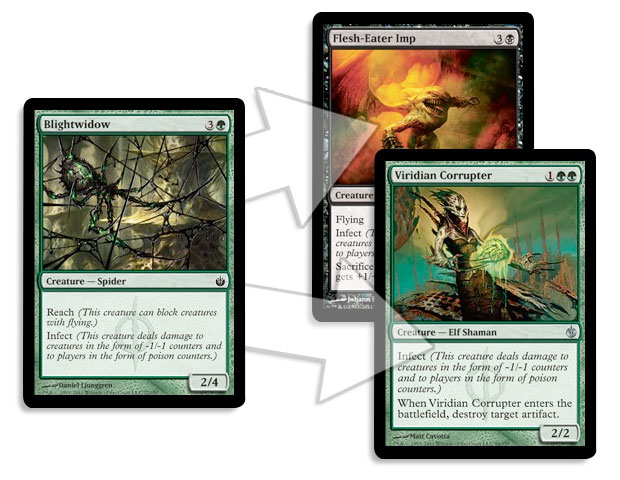 While I am in the Viridian Corrupter camp, I spent some time trying to come up with an argument for Flesh-Eater Imp. The only major problem with taking Viridian Corrupter is that the player to your left will get a third-pick Flesh-Eater Imp (which is as sure of a signal that infect is open as a player can hope for). This means that if you do choose to go infect, it is likely that you will have to fight the player on your left for the poisonous goodies that you are looking for. 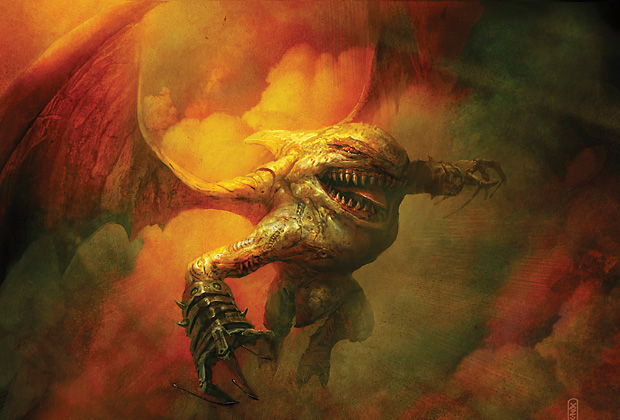 So while you are well on the road to an infect deck with a Blightwidow and a Viridian Corrupter, you are going to have to work pretty hard to cut infect through the remainder of the pack if you don't want to get your left-hand player's poisony seconds in pack 2.

If you're interested in forcing infect, then you could use this as an argument for taking the Flesh-Eater Imp. But if you're taking a more open approach to the draft, then you probably want to go for the Viridian Corrupter. 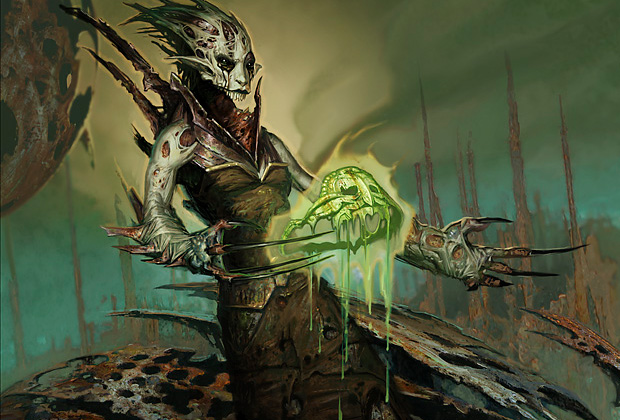 Instead of explaining why I'd advise taking the Viridian Corrupter myself, I'm going to send you back to the response thread.

In my opinion, the best argument in the thread came from Paulo Vitor Damo da Rosa: "I like Viridian Corrupter better. For starters, I think Corrupter is a better card - in a pick 1 pack 1 situation I'd pick Corrupter - and now you already have a Blightwidow, which means you might end up in UG for example. Even if Infect is being cut, both green cards are very good in dinosaurs, whereas Flesh-Eater Imp is not nearly as good in a non-infect deck"

Even if you think that Flesh-Eater Imp is better in a dedicated infect deck, if you are at all open to the possibility of drafting a non-poison deck, then you would do well to take the Viridian Corrupter as you will then be well on your way to any number of good green decks.

Posted in Limited Information on April 12, 2011