Posted in Limited Information on January 20, 2009

o refresh you on last week's bonus exercise: It's pack 3, you're drafting an aggressive green-white deck, and so far you have the following cards:

You've noticed during the draft that white is being very underdrafted, hence the many excellent white cards, and you've seen very few blue or black cards, but nothing else has really stuck out at you about the draft.

We open up our third pack and it contains:

Before we start talking about what we take out of this pack, let's get a better understanding of the cards that we've already drafted.

Currently I plan on playing:

We have 16 cards that we want to play right now, so we're pretty much exactly on track to have a complete 23–24 spell deck.

Normally I wouldn't want to play Obelisk of Naya in this type of deck because the curve is so low, but this deck is a little bit anomalous because of how much white and how little green it has. If I picked up an awesome red card like Naya Charm, I'd have no problem playing a single Mountain and the Obelisk of Naya to support it.

I don't want to play Naturalize or Dispeller's Capsule main deck in this deck (or most decks for that matter) but because we already have them, we don't have to worry about picking up any more Disenchant effects. 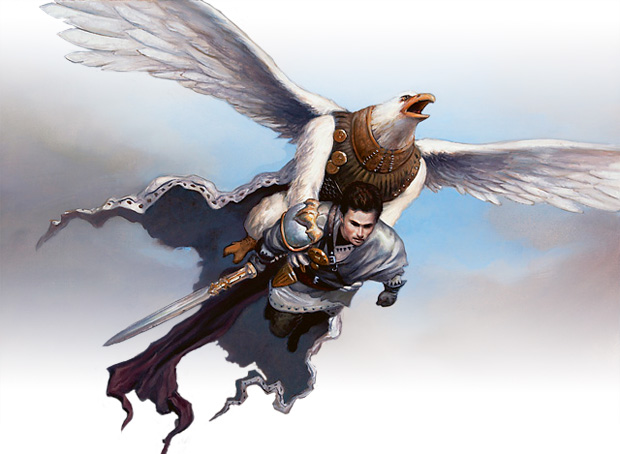 Other than our Oblivion Ring and our Sigil Blessing, this deck has a striking lack of noncreature spells, which is both a good thing and a bad thing. The good part about it is that we have an awesome curve and will allow us to get out ahead of our opponents early and win long games by punching in a bunch of early damage and then winning on the back of my exalted creatures, Welkin Guides and/or simply overwhelming our opponent by having enough attackers to continue punching through damage as the game progresses.

The bad part about not having any tricks is that what you see is what you get. If your opponent can deal with what you have in play, then there isn't much you can do about it. If your opponent plays a powerful card like Sharding Sphinx, Flameblast Dragon, or Battlegrace Angel, then you're going to be in big trouble.

If your opponent plays a pinger such as Blood Cultist or Vithian Stinger, then that could also leave you backpedaling.

While it's always easy to say things like "I'm going to be on the lookout for Oblivion Rings" or other such top-line cards, when you're drafting you should be aware of what cards go up or down in value based on the contents of your deck. 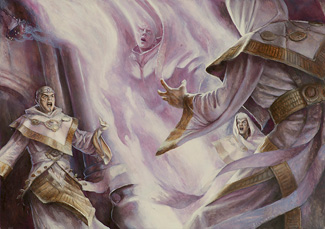 Given the cards that I have, I'll be looking to take Excommunicate pretty early. Last week I mentioned that Excommunicate is at its best when you're ahead. And, well, it's tough to get further ahead early than when you have a hyper-aggressive two-color deck.

I'll also be on the lookout for a Giant Growth effect or two, but that isn't that high of a priority for me as I already have a Sigil Blessing as well as two Welkin Guides to help me force through damage.

Brilliant Ultimatum is not particularly good most of the time. Once you have

you should be able to play any spells that you draw, so Brilliant Ultimatum is essentially just a very expensive card drawing spell. While I'll play Brilliant Ultimatum in decks that have two awesome, game-breaking spells that I really want to play, or in decks that have lots of expensive cycling spells liked Yoked Plowbeast, I normally won't play it main deck. 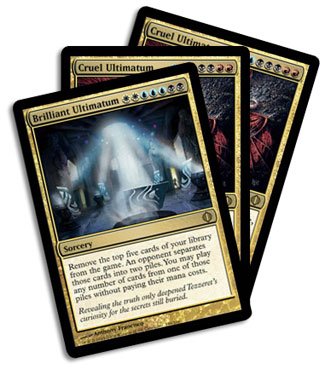 As for Obelisk of Bant, Obelisk of Jund, Grixis Panorama, Etherium Sculptor, Blister Beetle, Call to Heel, and Tortoise Formation ... Well, you don't really have to spend too much mental energy to know that you shouldn't pick these (but we will come back to some of these cards in a second). 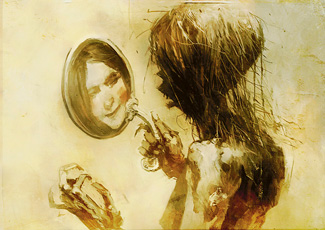 In an eight-person booster draft you are competing against seven other players, of which you will play at most three (or four in rare circumstances). That means that you are going to play against the player who was the beneficiary of the card that you didn't hate draft roughly half of the time. Combine that with the fact that they might not draw the card, they might not be able to play it and it might not be relevant, and you've given up a good card from your own deck that you would have gotten to play in all of your matches and you see that (from your perspective) a card for someone else is worth only a fraction of what a card for yourself is worth.

While there have been times where I'm in an eight-person draft and I've spent my first pick, third pack hate-drafting something ridiculous such as Caldera Hellion or Mycoloth, I've never done it in favor of a card as good as any of the on-color cards that are available to us in this pack.

While Agony Warp and Tower Gargoyle are arguably the two most powerful cards in the pack, they honestly aren't that much better than Sigiled Paladin.

Feel free to hate-draft if you aren't giving up anything relevant, or if the card you are hating is absurdly good against you and you don't have to give up much to take it out of the draft. But please, don't waste a perfectly good pick denying one of your many opponents a single good—or even very good—card from their deck.

Can We Get It Back? 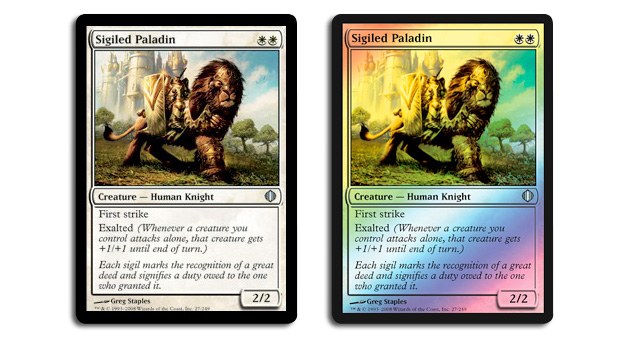 So now we're down to just the Sigiled Paladins and the Topan Ascetic.

Topan Ascetic is particularly good in an exalted deck because it is both a huge blocker in a deck that needs help defensively and a very formidable attacker when you only want to attack with one creature in order to gain exalted bonuses. In addition, Topan Ascetic often survives through Infest and Jund Charm (something that Sigiled Paladin does not do).

Sigiled Paladin allows for tremendously aggressive starts, especially with our three Akrasan Squires. If we open on turn-one Akrasan Squire, turn-two Sigiled Paladin, our opponent is quickly going to be deciding whether they want to play first or draw first (if there's a next game) unless they have some very good answers. Even if you don't get a sick start, at any stage in the game, Sigiled Paladin can attack as a 3/3 first striker.

Because of this deck's lack of spells, it is particularly important for it to start out ahead. Starting out ahead is a job that Sigiled Paladin is perfect for.

Ultimately, I think that Sigiled Paladin is just better for this deck. But there's more going on than just asking what the best card is ....

If we take a Sigiled Paladin, the following notable cards will be left in the pack:

If we take a Sigiled Paladin, the only ways that we will table (get a card back when the pack comes back around to us) a Knight of the Skyward Eye, a Sigiled Paladin, or a Topan Ascetic is if there is only one other non-Esper white drafter at the table OR there are two other non-Esper white drafters at the table and the first one to see the pack takes Topan Ascetic over the white cards.

No matter how you look at it, the odds are slim that we'll get anything back if we take a Sigiled Paladin.

If we instead take the Topan Ascetic the notable cards still in the pack are:

Now we have a pretty reasonable chance of getting a quality card back out of this pack.

Given how much white we've gotten, it seems almost impossible that there are three other non-Esper white drafters in the draft. That means that there probably won't be a home for the two Sigiled Paladins and the Knight of the Skyward Eye.

Of the seven remaining drafters we can be fairly confident that there will be homes for Tower Gargoyle, Agony Warp, two of the three white cards, and Blister Beetle.

That's five cards for seven people. If there's someone that needs mana fixing (which there probably will be) then we have six cards accounted for. Now we're down to the last person. If that person opts for a Call to Heel or a mana-fixer, then we're set. If that person gobbles up the last white card, then we won't get anything back.

If I had to make a conservative estimate, I'd guess that around half of the time I'd get a white card pack out of this pack. Since I'd prefer Topan Ascetic + half of a Knight of the Skyward Eye to one Sigiled Paladin, the choice to me is clear. 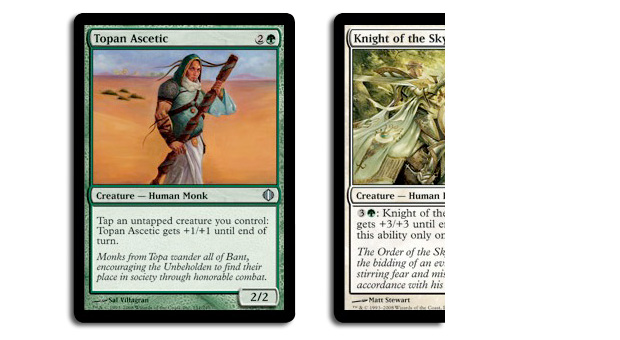 Even though I know that I'm not guaranteed a card back, the chances are good enough that I'll take the Topan Ascetic.

Don't Worry Too Much About Tabling

This pack, with the deck that I've drafted, in this draft, was one of those rare situations where the likelihood of something tabling significantly affected my draft pick.

Most of the time the biggest table related thing that you should take into account in an eight-person draft is what role-playing cards might come back.

Let's say that you opened that same pack, but you were drafting a dramatically different deck that needed the Obelisk of Jund to come back. Since the pack is so strong, it's likely that you will get the Obelisk of Jund back. With that in mind, you can feel free to take quality cards over Obelisks that you might see in the next few packs, even if you really want that Obelisk.

This was covered nicely in the forums last week, but I'd like to reiterate the point that mana curve issues arise when you have too many expensive spells, not too many cheap spells.

The fact that this deck has a lack of three-plus drops is not a valid reason for taking Topan Ascetic over Sigiled Paladin.

If anything, the many one- and two-drops in the deck should act as further incentive to take Sigiled Paladin over Topan Ascetic, as an additional two-drop will help enable you to play multiple spells in one turn.

You open up your first pack of a triple Shards of Alara draft. It contains:

Posted in Limited Information on January 20, 2009