Posted in Limited Information on October 13, 2009

ro Tour–Austin is this weekend, and by the time you're reading this I'll already be in Texas to get in a few extra days of marathon Magic and barbecue.

Sure, I'll be playing a good amount of Extended while I'm here, and while I find the format quite exciting (I absolutely love exploring Constructed formats after a new big set comes out), the thing that I'm really looking forward to doing is drafting.

While I'm doing these drafts, I'm going to make sure that I take charge of my draft decisions. And when you're drafting, you should too!

In Magic 2010 Limited, you have a very small number of picks before you have to commit to your colors. Sure you can leave your options open by focusing your picks on cards of a single color until you get a sense of what other color is being underdrafted, or you could dabble in three colors until you figure out which of them isn't readily available (or until you open something exciting to cement yourself into one of those colors). But in general, by about pick 6 or 7 you should probably know what colors you are going to be drafting.

Sure, there are exceptions to this, but generally when a player switches colors much later than this in M10 Limited, it would not come without a substantial cost. You might be able to make up for that cost thanks to something extremely powerful (it might be worth it to lower your overall card quality slightly if that means you get to play your Baneslayer Angel).

In Zendikar, you have a lot longer to make color commitments. Why? Because there are just so many high-quality commons.

While I was writing my column last week, I was looking for examples of commons that I would never (or almost never) want to play in my Limited decks. The only ones that I won't see in the starting 40 during any of my upcoming Zendikar drafts are Noble Vestige, Sunspring Expedition, Trapfinder's Trick, Desecrated Earth, Mindless Null, Demolish, Beast Hunt and Scythe Tiger. I would rather play a nineteenth or twentieth land then any of these except for maybe Noble Vestige or Mindless Null. There might be an application for Scythe Tigers if you get enough of them and enough other cheap, aggressive green creatures, but those situations will be few and far between.

That means that in Zendikar, you will regularly be able to pick up playable cards as late as tenth or even eleventh pick. The effects of this cannot be underestimated. You now have the freedom to consistently wait several picks before you have to commit to your colors. You could take a number of green cards, a couple of blue cards, and a black card early and end up playing blue-black splashing red without paying too high a price for your early indecision.

When you're drafting Zendikar, you should take the time to figure out what colors your neighbors are telling you to go into. If you can, you should skew toward taking artifacts or cards that have only a single colored mana requirement with your early picks. That way, you won't have to worry about having wasted too many (or any) picks once you commit to your colors.

But even if you don't take focus your early picks on artifacts or easily splashable cards, you shouldn't be afraid to switch colors if that's what the packs are telling you to do. You could start your draft out with two green cards and two black cards, and then switch into white when the best card that you can pick up fifth-pick is Shepherd of the Lost. And your draft deck will usually turn out better for it.

We'll get back to the Shepherd of the Lost pick in a little bit, but first let's take a look at Allies.

Because the value of Allies depends on how many of them you have in your deck, when drafters place a high value on Allies that makes them less desirable as it will become relatively difficult to get a lot of Allies in your deck.

When drafters place a low value on Allies, that makes them more desirable as it becomes relatively easy to get a lot of Allies in your deck. That puts you in a great position to start whomping your opponents with a 4/4 Oran-Rief Survivalist and a 3/3 Umara Raptor on turn four.

Right now I get the feeling that allies are being overvalued, but that could easily change as people find that their Ally-based strategies aren't being as successful as surrounding landfall strategies, or simple beatdown or control strategies. And once people start undervaluing Allies, it becomes very attractive to draft Allies. Until they start winning a bunch and people start overvaluing them again ....

But what does it mean to say that allies are being "overvalued" in the abstract? Does it mean that you shouldn't draft them? Not necessarily. In fact, it might just put you into a position where you could further benefit from the idea that they are being overvalued to draft them heavily.

Just by drafting Allies early, you might be able to have a large enough effect on your leftward neighbors to insure that you will get additional Allies in pack 2. And if the people to your right aren't actively looking to draft Allies (or aren't in your colors), you might find yourself rolling in +1/+1 counters before you know it.

But if you feel that Allies are being valued highly, you are going to have to put a high value on them yourself if you want any chance to make your Tuktuk Grunts and friends relevant.

Now of course you wouldn't want to first pick an Oran-Rief Survivalist (unless you feel confident about your ability to force a particularly powerful Ally deck, but that's a different question for a different day). But if you have the chance to take Allies early at little cost, you probably should.

Because having a number of Allies in your stack significantly raises the value of your subsequently drafted Allies, investing some early picks on Allies will give you greater equity as the draft moves forward. That equity might not always turn into a great deck, but it will improve your chances for big payoffs.

So if you can pick up Allies early on the cheap, you should feel incentivized to do so. If you can't, you have three options. You could choose to not worry about Allies, reevaluating your Ally situation as soon as you get a pack where an Ally is clearly the best card on its own. You could choose to take a stand somewhat early, taking an Ally over an individually more powerful card at the first chance that seems reasonable. Or you could go for something somewhere in-between those two extremes.

You don't have to decide on this before the draft, but you are likely going to have to make some tough decisions regarding Allies within your first few picks.

What to Wait For (Passive vs. Active Decisions)

It's important to understand what you should wait to decide on and what you want to act with a sense of urgency to make things happen for your draft decks.

When you have actively set yourself down a certain road, such as drafting a heavy black deck, or an Ally deck, or a control deck, you will want to continue along that road unless something significant happens to change your direction.

That type of reasoning will lead to clear, coherent strategies in drafting and in game play. And if you can complement that type of consistency with the ability to constantly evaluate and reevaluate your situation to understand when you should deviate from your previously constructed plan, you will find yourself doing a whole lot more winning than losing.

Your plays will be coherent because you are following a plan. And if no new information presents itself (that new information could simply be you realizing that your plan is not as efficient as another plan that you could be implementing, or it could be effected by the appearance of a new card, or a new signal or ....), there's no reason why you should change what you're doing.

But you should not let things that you have not done effect your course of action.

If you went into a draft knowing that you were not going to draft white under any circumstances (maybe you decided this because you somehow knew that six of the eight players at your draft table were going to force white, or because you thought that white was terribly underpowered, or ....), you wouldn't touch that fifth-pick Shepherd of the Lost even if it was the best card in the pack. 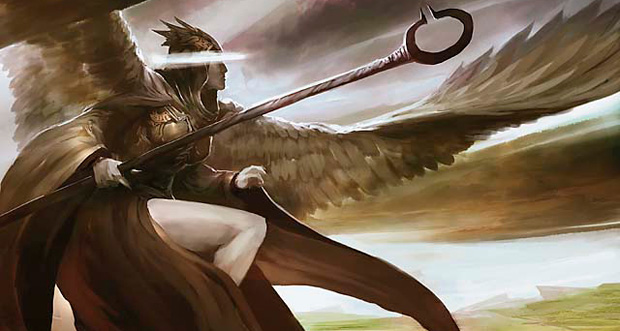 But if you went into the draft with an unbiased opinion about white and got passed a fifth-pick Shepherd of the Lost in an otherwise extremely weak pack, it would probably make sense for you to take the 3/3 with flying, vigilance, and first strike.

If you decided not to take the Shepherd of the Lost there, you would have to have a very good reason. A reason such as "I haven't gotten passed any relevant white cards up to this point, so I'm pretty sure white isn't available" is perfectly good cause to look for other options in the pack. But a reason such as "It's already pick 5 and I don't have any white cards" is not valid.

You should always take charge of your decisions, don't let what you've done in the past determine your subsequent decisions. "I haven't been doing this, so I'm not going to do it" simply isn't a legitimate justification for draft or play decisions. It's just a ridiculous, self-reinforcing loop that will prevent you from making the types of adjustments that you need to make to become the type of Magic player that you are capable of becoming.

The primary way that I try to ensure that I take charge of my actions during games and drafts is that I do not make a decision unless I could offer up at least some sort of justification for the decision if another person asked me about it after the draft or game. "I did X because of Y, and I didn't do Z because of A" is a great way to structure this sort of justification for your plays, However, you might not be taking everything available to you into account, and there still might have been a better play than X that you didn't realize. So while this far from guarantees flawless play, it should help you better utilize the skills that you already have—while at the same time making it easier for you to learn from your mistakes.

Anyway, I'm off to get some more drafts in. Wish me luck at the Pro Tour this weekend!

Posted in Limited Information on October 13, 2009