Tales from the Prerelease

Posted in Limited Information on September 30, 2008

he Shards of Alara prerelease was last weekend and I had a blast.

I woke up bright and early on Saturday to go to the 9 a.m. Sealed prerelease flight at Neutral Ground. On my way to the shop I picked up a couple of sausage, egg, and cheese McGriddles from McDonalds, which are almost as disgusting as they are tasty and let me tell you, they are very tasty.

In my first flight I opened up my pool and I immediately knew I had to play Naya (red-green-white). I opened up some decent cards for an aggressive black-red deck, but there just weren't quite enough cards to build a good deck.


The cards that really stood out in the deck were the 2 Naya Charms, the Battlegrace Angel, the Knight-Captain of Eos, the Oblivion Ring, the Branching Bolt and the Resounding Thunder. After the all-star squad, the rest of my cards were all fairly solid, so I figured I had a pretty good chance of doing well. 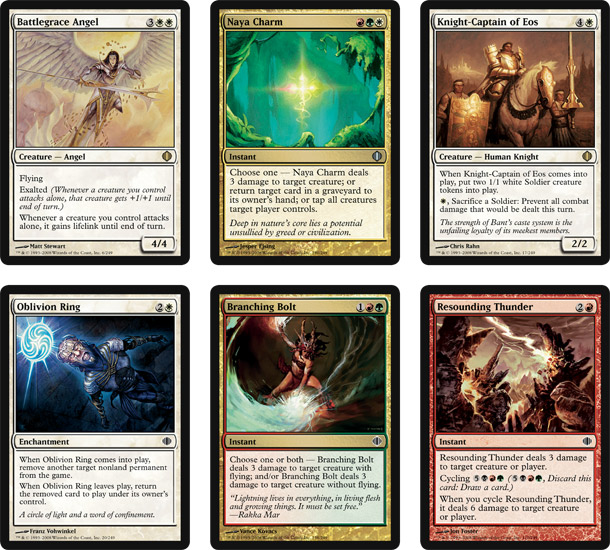 A good way to start a Prerelease

In my first round my opponent was playing a five-color deck and never managed to draw the right lands to make his spells work, allowing my giant monsters to make short work of him.

In my second round my opponent absolutely wrecked me. We spent the first game going back and forth trading creatures and using removal spells until he played a monstrous Flameblast Dragon. I had a one-turn window to draw my Oblivion Ring, but I didn't and we were off to Game 2. While I at least thought I had a chance in Game 1, I was never close to developing that illusion in the second. My opponent played a turn-three Woolly Thoctar, a turn-five Carrion Thrash and had a removal spell for my Battlegrace Angel. Ouch.

In the first game of the third round I played a turn-four Battlegrace Angel and my opponent didn't have any answers. In Game 2 we went back and forth for a while, but I was eventually able to take him down with a Bull Cerodon.

In my fourth round my opponent had color troubles in both games that she was never able to recover from.

I was a little bit disappointed that I didn't have more exciting games in my first flight, so I decided to make up for it by playing in the most exciting tournament possible...

I teamed up with my friend Asher Hecht and we opened up the cards for an awesome Naya (red-green-white) deck and then a bunch of average cards to compliment them. We put together the red-green-white beatdown deck really quickly and then I insisted that I wanted to play the other deck, which was an absolute jumble.


In our first match one of our opponents got stuck on lands and we were able to run them over with ease. Our second match didn't go as well as we got pretty slow draws that gave our opponent's time to whomp us with Hellkite Overlord.

We wanted to play the last round of the 2HG tournament, but Neutral Ground was closing at 8 p.m. and we knew that if we played our last round then we wouldn't have a chance to draft Shards, and that just wasn't an option.

I finished off my prerelease by doing a 6-person booster draft with some of my friends using packs we had won throughout the day. I started off the draft with a Sharuum the Hegemon (a nice way to start a draft if there ever was one) and then followed it up with several exalted creatures, hoping to draft a powerful defensive deck that would attack with one huge creature every turn. As the draft went on I picked up a couple of Waveskimmer Avens, who are absolutely awesome in an exalted deck, and 3 Excommunicates.


Unfortunately my deck didn't turn out as well as I had hoped it would as I never got the good defensive cards that I was looking for, and I had to play more filler than I would normally like (two Outrider of Jhess is two too many). Even though things didn't work out perfectly for me this time, I think that exalted is going to be one of the major archetypes in the format.

I wound up going 1-2 in my draft. I actually lost both of my matches to Flameblast Dragon, bringing my count up to 3 losses to the monstrous Fireballing Dragon on the day. Ouch!

I was not impressed with Spell Snip. While it is a cycler, which automatically makes it decent, its other side, a three-mana Force Spike, just isn't good enough. Back in Ravnica block I had a big soft spot for Runeboggle. Now, much like Spell Snip, Runeboggle was a "bad" card. So, when you were able to counter a spell with Runeboggle, it was an event worthy of celebration. You were able to use your 23rd card to counter something and draw a card. Awesome!

However, when you counter a spell with Spell Snip, nothing special happens. Yes you traded your bad card for a card that is probably much better, but nothing else happens. There's no extra card, no ticker-tape parade, no ice cream cake, not even a cookie. The thing is, if you are playing a card that normally isn't very good, you want to make sure it's excellent when it works. Unfortunately, that will never be the case with Spell Snip; it's always going to be mediocre at best.

I'm not saying you should never play Spell Snip, just that you should be aware that you are playing it as a cycling card that will have another effect every once in a blue moon. If you have the option to play almost any other cycling card, I would recommend that you do that.

In my last article I made some predictions about Shards of Alara Limited. One of the predictions I made was that it would be important to take mana-fixing early in drafts. This is a historically sound prediction to make; mana-fixing is always very important and it's usually pretty hard to come by. While I was right about the mana-fixing lands being quite good, early picks, I was wrong in thinking that people would have trouble casting their spells. You see, good fixing just isn't as hard to come by in Shards of Alara Limited as it has been in years past.

One of the key things to keep in mind when you're playing or thinking about Shards Limited is that while Shards is the big set of the block, it's smaller than big sets of the past have been. Because Shards is a smaller set, mana-fixing is relatively plentiful.

There are a total of 249 cards in the set, 101 of which are common, 60 of which are uncommon, 53 of which are rare, 15 of which are mythic rares, and 20 of which are basic lands. Now that there is one of these basic lands in every pack, you have about a 1/10 chance of opening any given common in a pack. This has a lot of implications that I'll be sure to explore as we figure out what the strongest draft archetypes are, but right now I'm going to address some of the clearest points as we can use these stats to help explain the ease with which you can find good mana-fixing. At common you have the cycle of tri-color fetch-lands such as Grixis Panorama as well as the cycle of Obelisks, such as Obelisk of Bant. In addition to the tri-color commons, there is also the set of tri-lands at uncommon such as Arcane Sanctum.

So, if there are 10 common mana-fixers out of 101 commons and 5 uncommons out of 60 that means that there is going to be on average a little bit more than one piece of mana-fixing in each pack. Since people who are drafting three- to four-color decks rarely need more than three pieces of mana-fixing you can expect to get enough fixing to make your deck work without expending too much effort.

In order to be safe, players who don't have any fixing once they are in the second pack are likely to take mana-fixing higher than they would have in the first pack. So, even if you have a piece of mana-fixing when you enter the second pack, if you expect that the next few players to your left have little to no fixing between them, then you're going to need to adjust how you value mana-fixing in order to stay on target.

Since players always need to insure that they can fix their mana, if a player has a three-color deck and no fixing going into the third pack, then they might have to take a card such as an Obelisk of Esper a lot earlier than they would normally like to.

Another, frequent factor that will affect the way that you might value mana-fixing is if you are drafting a deck that doesn't want to play any Obelisks (like some form of aggressive beatdown).

If you had to pick your favorite individual Limited format from the last year, what would it be?

I'll admit that I was a bit surprised to see how popular Eventide Booster Draft is. It wasn't a big tournament format, but it was a lot of fun and I'm glad to see that that was enough to draw people to play it.

So, if you ever find that you aren't particularly drawn to a Limited format, don't worry. There's sure to be one more to your liking just around the corner. Or, as in the case of Eventide Booster Draft, there might be one right in front of you that you just haven't noticed yet.

For those who were wondering, my favorite format of the last year was Lorwyn-Lorwyn-Lorwyn booster draft. I absolutely loved this format. There were so many good cards that everyone had an easy time putting together a decent deck. But, that wasn't the fun part. Not in the slightest. The fun part was trying to put together something absolutely degenerate, be it a sick Merfolk deck, Elemental deck, Elf deck, Goblin deck or 5 color vivid land/changeling deck (ok, maybe I was the only one who liked that deck). Pretty much every time you played, you could feel safe knowing that you were going to get a good deck. But when you figured out what you were supposed to be drafting, then great things would happen.

Shards of Alara Launch Parties are this weekend, October 3-5, at stores worldwide, and you won’t want to miss them. Get your chance to buy Shards of Alara cards as soon as they go on sale, play the new set with your friends, and get a foil, alternate-art Ajani Vengeant promo card!

Posted in Limited Information on September 30, 2008