Posted in Limited Information on June 5, 2007

been a while, but I can finally bring you guys a draft walkthrough of relevance once more. At the time of writing this, Future Sight has just been released online and is only playable in Premier Events. I was worried about whether or not I would be able to get a draft done to share with you guys, especially as the server was down as per usual on Thursday (the day I write my articles) and the only way I could draft was if I Top 8ed a Premier—a simple task, but one I did not have the time for with a deadline looming.

Jelger Weigersma saved me with a one-word MSN message: "Draft?" Since time immemorial it has been the Pros' pastime to team Booster Draft. Even in the golden age when Rochestering was still possible, it was too time-consuming to waste away the time during the byes or waiting for the Top 8 to pan out. It is still a relevant format, used in the Top 4 of a team PTQ, although there haven't been any of these in a while. Two teams of three sit in a circle, one player of the first team, then one of the other team, and so on (ABABAB), and then it proceeds just like a normal draft. At the end, the members of each team converge and help each other construct their decks and share the information they gleaned from the draft. Then every player plays the other players in the opposing team, and at the end of the nine matches, one team stands triumphant and, generally speaking, wins all the rares.

There are variations. It is not exclusively six player; many eight-player team drafts are done, although they tend to take a long time if the round robin format is kept. Sometimes players are unhappy at the strength of the opposing team (remember, there are the rares at stake), in this case, you can begin the draft like a regular draft and then randomly assign teams afterwards. This is often done whilst we draft in preparation for a Pro Tour because it has no influence on how you draft.

There are a couple of new skills at work in a team draft. For a start, there are only six of you drafting, so the total card pool is weaker as there are less cards. You also get to wheel two picks earlier, meaning you can often plan ahead with ease. Remembering everything you pass is also even more crucial as you will have to play all of your opponents, meaning you have to think extra hard about passing a Damnation rather than hating it for the good of the team (this is often a tricky decision and you have to look at the rest of the pack to see if you and your team mate three over will benefit more than them having a Damnation).

Whereas hating is never correct to do in a normal draft, its potential blossoms here. Cooperation is not the name of the game. Whereas in a regular draft, you wish to send clear signals to the player on your left so that you keep him out of your colours and both of you wind up with better decks, it is not the case in team draft. You want to hook the player on your left into your colours whenever possible. You want to send them bad signals, so that they delve into your colours early, either wasting valuable picks when they realise the error of their ways or dominating them completely if they stick with it, resulting in a vastly inferior deck and several more wins for your team.

With these new skills in mind, here is a draft I did teaming with Jelger and Tiago Chan against a squad of Americans: 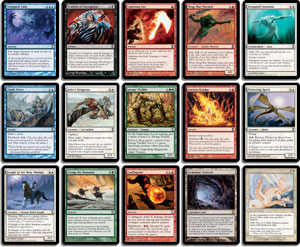 Call to the Netherworld, Drifter il-Dal, Sage of Epityr, Aspect of Mongoose, Curse of the Cabal, Leviathan

Pick: Curse of the Cabal

I end up with nothing of note in the late picks except for a Feebleness and a Watcher Sliver. I'm still trying hard to find my second colour, although given the depth of white coming my way, it is likely I am the only white drafter on the table and could well end up mono-coloured. 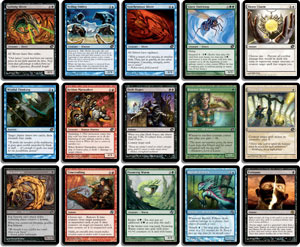 Nothing exciting happened in the last few picks. I picked up a bunch of unexciting Black cards, pushing further in the colour's direction. Now it is time to crack open the new set and see what it has to say. 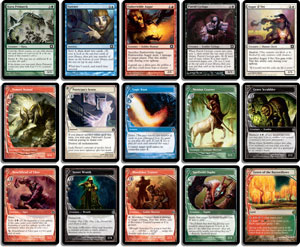 As expected, I get to wheel a goodie from this pack. The rebel is simply inferior to the other card, irrelevant of curve issues.

Maybe I should have made my decision about my second colour a little earlier, but looking back I still cannot find the point where it was an easy decision to make, given that I had mistakenly picked the Sprout Swarm over the Whip-Spine Drake. I was worried that this would be a fairly dull draft to begin with as I was getting such a juicy hook-up in white, but it wasn't the case. I splashed black in the end as it fit the deck better, providing it with removal and slightly better playables.

My first two opponents both played black, enabling me to take out the weak, three-card Sliver package to bring in Street Wraith, Bog Serpent, and Pentarch Ward/Melancholy. The deck was very good and won these matches with ease despite bad draws. It won one game against a blue-black mage with Sacred Mesa in hand the whole game. I lost a very frustrating third match due to a misclick, so that I failed to make a land drop on my first turn thanks to F6 auto-yielding the whole turn. I almost won the game and could never have lost it if it weren't for F6. Ah well.

Posted in Limited Information on June 5, 2007