Posted in Limited Information on February 12, 2014

henever we get a new set, the flashy new cards and mechanics take most of our attention. This is normal, as exciting new cards are what keep us playing Magic. We talked about the inspired mechanic last week, and how it can be tricky to get online. We also touched on an interesting way to evaluate the tribute mechanic as we get a feel for it. But what may be the most important mechanic in Born of the Gods for us Limited players is still bestow. 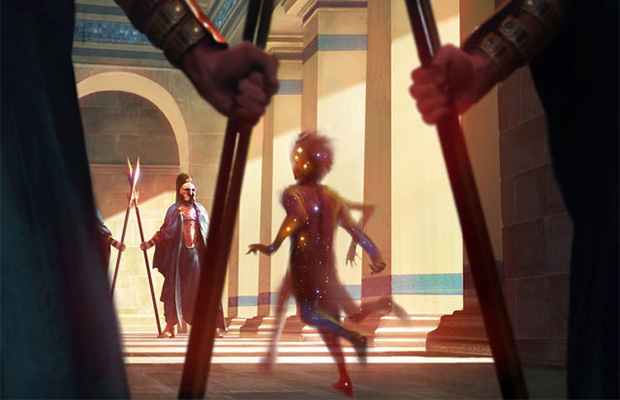 I know it's not the gleaming new toy in our toy box, but when you look at the bestow creatures in the set, you realize what a wide swath they cut.

The first thing to remember about bestow is how critical it is to the functionality of the whole format. Without bestow, heroic wouldn't have been possible. It's just too difficult to jam enough tricks into a set while still having enough creatures running around to be the recipient of said tricks. Bestow sidesteps this nicely by acting as both a creature and an Aura, thereby performing double duty on the set list.

And boy did we get some nice bestow creatures in Born of the Gods. First we have a full cycle of "vanilla" bestow creatures. I was fortunate enough to do the preview for these right here in this column, and while the jury is still out on where they fall into place, it's clear that they are every bit as powerful as any enchantment creature has been thus far.

The whole "can't be blocked" thing is an awesome foundation for a huge bestow battle cruiser. As just a 1/1 with this ability for two mana, it's not a great card. But then you remember that not only can you bestow this onto other things, you can also bestow onto it. While it's always more powerful to use bestow creatures as an Aura first, cards like Flitterstep Eidolon offer great versatility.

Ghostblade Eidolon is my kind of monster. Played on turn three, it is very close to being a white Two-Headed Cerberus. Once you start piling on sweet bestow creatures, it gets to be a deadly threat quickly. And white has some awesome combat tricks in this format. Additionally, you can use it as a kill condition late in the game by saving it in your hand and bestowing it onto an evasive threat. Even just putting this on a Prescient Chimera represents 8 damage this turn. You can't ignore the early-game/late-game punch this card provides.

Another candidate for bestow creature that will likely be cast for its non-bestow cost a good percentage of the time, Noble Quarry can create nightmares for your opponent. Not only is it a potentially interesting basement for a battle cruiser, it can also finish games whether cast on its own or with bestow. This Unicorn is not without risk, however. Remember that any instant-speed way to get this thing off the battlefield will render your other attackers quite blockable. It's not a triggered ability; it's a static effect that will disappear once the one-horned wonder does. Still, it forces the opponent do some backflips or die to a bunch of beefy green creatures, and that's going to be good enough a good percentage of the time.

Everflame Eidolon takes a much different approach to bestow. While a reasonable two-drop, it's only one additional mana to get bestow going. You could make an argument that paying

just to bestow and give +1/+1 may be worth a card. If you are throwing in firebreathing, you have yourself a deal! I would look to bestow this virtually every time, and it will be a rare case that I just cast it from my hand for two mana. This is interesting because a 1/1 with firebreathing is one of the better standalone bestow creatures around. It will often threaten big chunks of damage or trade up in combat for a more expensive creature.

Firebreathing is a cumbersome mechanic, but on a small, cheap creature it's quite good.

I talked about Spiteful Returnedlast week , and from my initial interactions with the card, it has lived up to the hype I put on it. It's annoying for our opponent while not asking a lot of us; what more could we ask for? The question I still have is how highly we will be taking this card in Draft. It doesn't seem like a first-pick-quality card, but I could imagine it.

In Theros, the devotion mechanic only came on permanents. This drew us into how it worked by setting the hook with some bait. When we first saw Gray Merchant of Asphodel, we knew that we would at least get a drain life for two out of the deal. When we saw Nylea's Disciple, we knew we would be gaining 2 life with the chance to gain a bunch more. 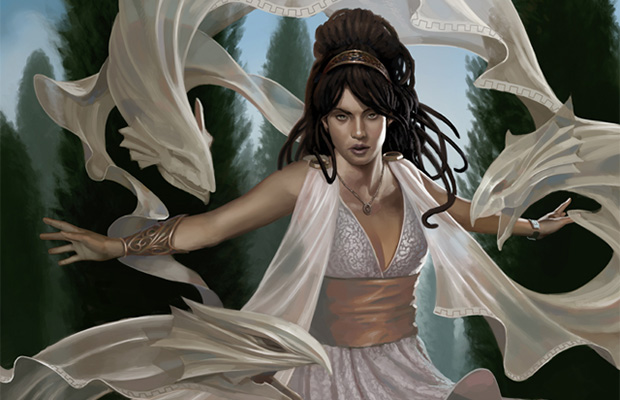 This made sense. It clicked for us. This has changed. In Born of the Gods, devotion comes on instants and sorceries. They still care about your devotion, but it's important to note that they don't add to the devotion count themselves. This is a big change.

Yes, Marshmist Titan is a permanent that has devotion, but since it reduces its own casting cost, it doesn't actually matter that it's a permanent for its own devotion count. The only devotion card in the set that does count for itself is Thunderous Might. And frankly, I'm skeptical that Thunderous Might is even a good card. Not buffing the toughness is a huge hit, which puts a lot of pressure on the heroic triggering aspect of the card.

Every other non-rare devotion spell is an instant or sorcery.

If you are in heavy white, Acolyte's Reward could be one of the best cards in your whole deck. Preventing damage and then throwing it somewhere else is one of the more powerful things you can do in Limited.

Ye olde Giant Growth effect. Sort of. Remember, on its own, it does nothing. Nada. You must have some green mana symbols on the battlefield before this combat trick actually does anything at all. Thankfully, green is pretty good at having permanents on the battlefield and if you get this card to +3/+3 or better, it's fantastic.

One thing to remember about all of these instant and sorcery devotion cards is that they will check the devotion on resolution of the spell. This is super important.

For example, you attack with a Nessian Courser, and you have devotion to green of three thanks to the Courser and a Nylea's Disciple. Your opponent blocks the Courser, and you fire off your Aspect of Hydra on the Courser (for an assumed +3/+3). In response, your opponent uses instant-speed removal to kill your Nylea's Disciple. Now the Aspect of Hydra will resolve, but will only grant the Courser +1/+1 because it checks the devotion count on resolution, not when you cast it.

This can have huge implications for every one of these spells; so keep it in mind at all times.

At first glance, I liked Sanguimancy. Then I read it again, talked to some friends, and realized I didn't like it at all. It's asking a heck of a lot. Not only does it not affect the board at five mana, it also is entirely conditional on your devotion count, board state, and life total at the time of casting. If you are behind on board, getting beaten down by an aggressive heroic deck, or just at a very low life total, this card does nothing.

This is far too shaky to be considered a good—or even playable—card.

Get ahead, stay ahead. That has to be the motto for Thassa's Rebuff. Another first-glance all-star, Thassa's Rebuff doesn't hold up well under close scrutiny. A fair comparison is Mana Leak. Mana Leak was pretty good in Limited. You could main deck it and not be at all embarrassed, but you didn't want too many of them. Thassa's Rebuff is like a Mana Leak that is inconsistent, conditional, and overall kind of sketchy.

I'm a realist. When I get my hands on the cool new cards, I am going to try them out and see what's what, just like you. I can't wait to do this, in fact. But after the dust settles on this initial fray I want you to keep the fundamentals of Theros block Limited in mind. Namely, bestow is really powerful, and devotion is conditional but can be very good. I'm curious about what other lessons we'll learn from Born of the Gods.

Posted in Limited Information on February 12, 2014