Posted in Limited Information on April 17, 2013

The clues are certainly there. Gates matter. And if Gates matter, then having multiple colors probably matters too. And that's a big part of what we have all been waiting for: a wide-open format where we can brew up our own new color combinations on the fly.

This kind of open creativity is what makes drafting Magic cards one of my favorite activities. Opening that first pack and having no idea whatsoever about where this particular draft will take you is an exciting proposition.

This week, we have yet another full cycle of common creatures to share with you, and they provide even more hints as to what the Limited environment may look like.

You know I don't like to keep you waiting, so let's take a look at our previews for this week: 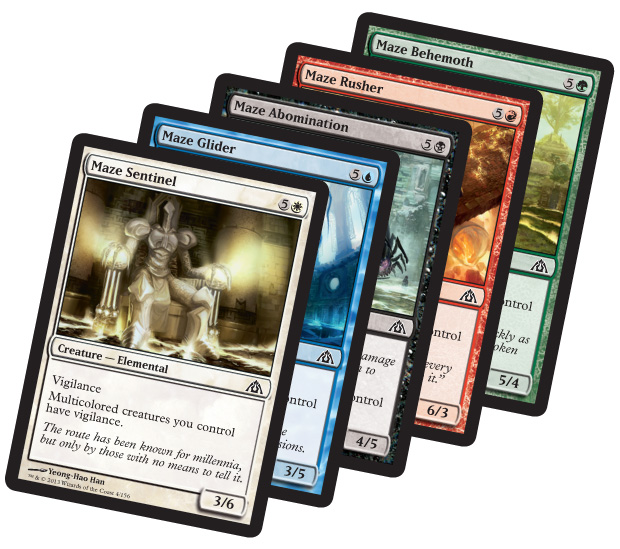 This feels kind of like last week. We have a full cycle of five creatures, all at common, all are monocolored, and all have the same converted mana cost. These are all Elementals, as it turns out. That, though, is where the similarities end.

This quintet costs six mana. Six is a much bigger number than four when it comes to mana cost. It's easy to overlook the difference. You can usually cast a four-mana creature on turn four. Casting a six-mana creature on turn six happens with much less frequency. These have the luxury of just a single colored mana in their mana cost, however. And as we dive into the details on each of them, we will see that single-colored spells aren't going to be the norm for decks that run them.

Let's take a look at each one individually and see what we are working with. 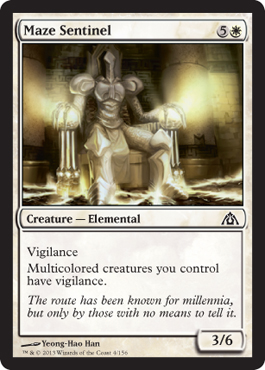 First things first: Vanilla Test. Comparing power and toughness to converted mana cost is going to give a useful baseline from which to start our journey into this particular maze. Maze Sentinel, in this case, is a staunch one. A 3/6 for six mana. It's far from appalling, but it's also not very impressive.

Add vigilance. Ok, I'm starting to come around a bit here. A 3/6 on the ground is nearly impossible to attack into, and giving it vigilance means that attacking with it will likely be very good as well. And we get to do both. Not too bad, but still not something I would be excited to run quite yet.

I can picture quite a few sweet cards from Return to Ravnica and Gatecrash that I wouldn't mind becoming a little more vigilant.

Vigilance is a little underrated as an ability. While not as flashy as flying or trample, with the right power and toughness combination, it can be very powerful. Usually, you would like to see something like what we have here: medium power, high toughness. This makes combat difficult for our opponent and maximizes our combat tricks and removal spells as well.

Let's move on to the next Maze Elemental and see what we find. 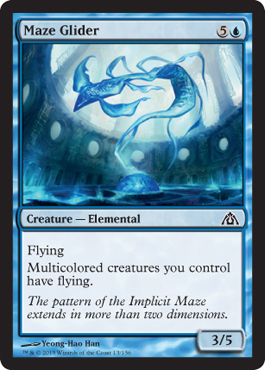 Maze Glider has worse stats than Maze Sentinel. In fact, as we will soon see, it's the only one of this cycle whose power and toughness don't add up to nine. A 3/5 for six mana is a pretty miserable thing, to be quite honest. I would expect that its ability is significantly better than Maze Sentinel.

I can picture this card winning some games on the spot. Tap out, cast Maze Glider, give three of your creatures flying, attack for the win. Two other things come to mind:

I'm thinking about drafting a Grixis-colored deck—blue, black, and red—where this is the finisher after laying down a bunch of Hellhole Flailers and Spawn of Rix Maadis.

Yeah, that would do just fine. 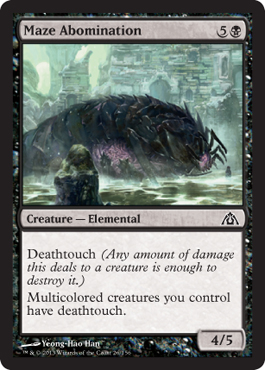 Maze Abomination is a 4/5 for six mana. I'm starting to get the idea that the power and toughness on these aren't being pushed too hard. This makes sense, as this is a full cycle of common six-drops, a spot on the curve still in competition with many rares. My expectations for their power and toughness would be lowered a bit, and this seems right in that area to me.

As an aside, it's interesting that our previous cycle were all 2/4s, where this one shows much more color-pie-specific power and toughness configurations; 4/5 seems like a good spot for this one to land, for example.

Oh, and it has deathtouch. Giving some portion of your team deathtouch is an awesome ability. Any small creatures become annoying to block as they now trade up, and they become amazing blockers for the same reason. And big creatures? They aren't left out either. Big creatures (like Maze Abomination) become essentially impossible to block profitably.

I think this is my favorite of the Maze Elementals. Sad, though: it's the only one of this cycle that doesn't get flavor text. 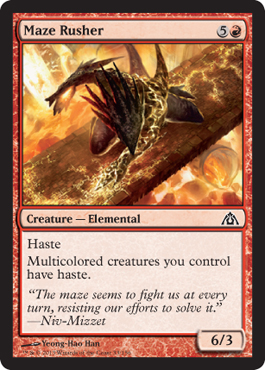 A very red card in feel and application, Maze Rusher is a 6/3 creature with haste. Not bad. Not amazing, either. For the same price we can have a Tenement Crasher, which is arguably a better creature on its own. The difference between 3 and 4 toughness is much greater than the difference between 5 and 6 power. I realize this sounds kind of crazy, as the difference is technically the same in each case: one.

Multicolored creatures you control have haste. This sounds kind of cool at first, but upon closer inspection it doesn't hold up that well. How many creatures will we still have in hand by the time we resolve this six-drop? And if our Maze Rusher survives the turn it was cast, how many high-impact, multicolored creatures do we need to play to make this ability great?

The answer is too many. When I come across this creature in a pack, I am going to view it as a slightly worse Tenement Crasher for the most part. 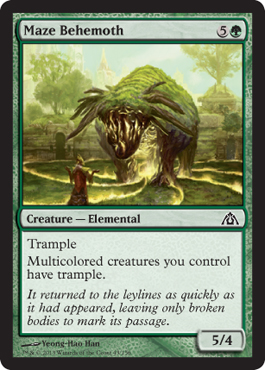 I was kind of hoping this would be a 6/4, but we'll have to settle for 5/4. Like most of this cycle, it's an unexciting but acceptable power and toughness for the mana cost.

If Maze Behemoth didn't have trample, I would have been very confused. Trample is the greenest mechanic I can think of. Each of these Elementals has shown its true nature by displaying the most essential mechanic of its respective color. Vigilance, flying, deathtouch, haste, and trample are all at the heart of what each color stands for. That's pretty cool.

So, here we have trample. And it's going to give our other multicolored creatures trample too, of course. This is going to range from kind of awkward to pretty darn devastating. Giving a 2/2 trample is pretty inconsequential. Giving a 6/4 trample, however, is a game-ending play. Not as good as flying, but still, this 5/4 trampler is doing plenty to affect the board on its own. Anything else we get from it is gravy, as they say.

Looking back on all five of these Maze Elementals, I have some criteria by which to judge each one. 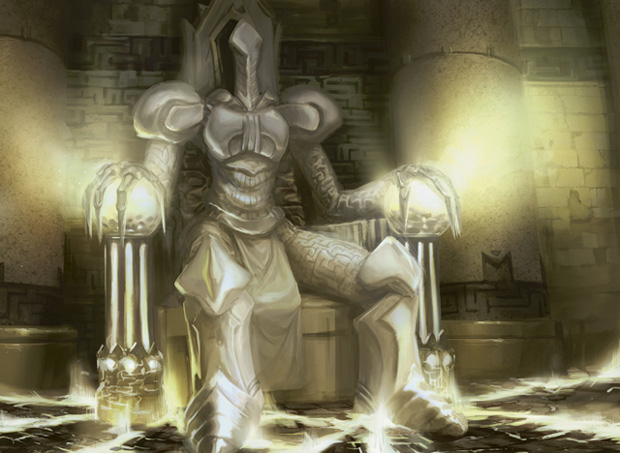 As you go over these for yourself, ask these questions and I think you will get a nice picture of where each one stands.

I also want to note that while we can build around these in Draft, we probably won't. These are good curve-toppers when we need an easy-to-cast creature with some upside. But they aren't going to be devastating endgame bombs very often.

In Sealed Deck, I would keep my eye on them, as you will know exactly how many multicolored creatures you have before adding them to your deck.

I really like that we have had ten creatures in the last two weeks, all of whom seem to be holding a little sign that screams "Play Multicolored Decks!" on them. I'm not one to argue with logic like that.

I still think Maze Abomination is the best of these five, even after taking all of this into account. Which one do you think is best?

Posted in Limited Information on April 17, 2013