he Scars of Mirrodin Prerelease is only a few days away and I can't wait. I probably spent close to a thousand hours playing Mirrodin Block Limited and I still wanted more (heck, if I could do a Mirrodin / Mirrodin / Mirrodin Draft right now I would do it in a heartbeat). And while there's no way that I can spend as much time playing Magic as I did back in 2003-2004, I am definitely looking forward to sitting down for some Sealed Deck play and a couple of booster drafts this weekend.

While I won't get my first chance to play with the set until Saturday I already know a few of the things that I'm going to be keeping an eye on:

The most obvious and quite probably the most important thing that I'm going to keep track of is, "Do I have enough artifacts?" In order to get the most out of metalcraft cards such as Carapace Forger and Rusted Relic, as well as cards like Myrsmith, Embersmith, and Tempered Steel, I'm going to need to have a ton of artifacts.

This means that I'm going to be taking artifacts with significantly more urgency than I would in say a Magic 2011 Draft, where I would still want to take artifacts early to keep my options open, but would cease considering them a priority once I committed to a set of colors.

Given the importance of artifacts in this set, I am going to prioritize artifact removal spells—especially ones that give me a lot of extra value, such as Slice in Twain and Oxidda Scrapmelter.

While I am drafting or constructing my Sealed Deck, I am going to keep a close eye on how many cards I have (or can get) with infect. A single creature with infect probably won't be all that threatening unless you also have a lot of Equipment, giant growth effects, and/or cards that proliferate.

Sure, your one creature with infect will still be good on defense, but unless you can give your opponent the full ten poison counters, all those unanswered attacks with your infect creature won't amount to anything.

The good news for players trying to draft infect decks is that—because creatures with infect do very little in decks that don't already have a lot of infect creatures—it should be reasonably easy for dedicated infect drafters to pick up a whole bunch of Ichorclaw Myrs, Plague Stingers, and Ichor Rats.

Once you've started down the infect road, be sure to fill your deck with as many ways to enhance your creatures' power and/or cards that proliferate as possible.

One thing that I am looking to learn this weekend, is how good is proliferate? Just looking at a partially constructed Visual Spoiler isn't enough for me to know how I should value cards like Thrummingbird and Steady Progress.

I already know that Thrummingbird and Steady Progress will be playable—because even without proliferate they would be almost good enough to include in your deck—but I get the feeling that they might actually be very special, especially if there are a lot of good cards with charge counters on them (like Tumble Magnet), a lot of good ways to give your opponents poison counters and/or a lot of good ways to put -1/-1 counters on creatures. 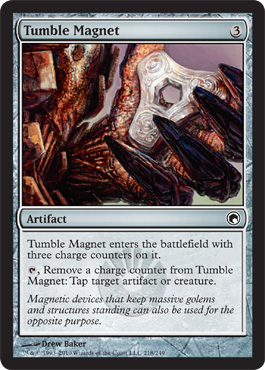 Cards that offer reusable effects that can make a serious impact on the game are always worth taking a close look at—especially when they are easy to cast and activate.

For example, cheap and efficient pieces of Equipment, like Darksteel Axe, are going to be good additions to pretty much any deck—and will be worth taking very early in pretty much any draft that you are playing in. 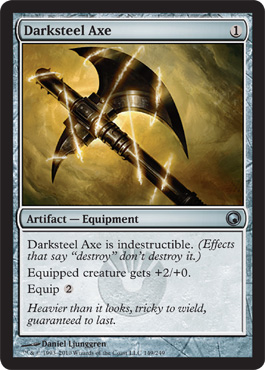 A good piece of Equipment will make a big impact on the board that is not limited to the lifespan of any one creature (as Auras are). Even if your opponent has a removal spell, or is able to trade with your creature in combat, you will be able to reequip and continue to put your opponent under pressure thanks to your enhancement.

Heck, you can even attack with an equipped creature, and then after combat move your Equipment over to a different creature to make it difficult for your opponent to attack.

But as good as a piece of Equipment can be (and you just need to look at cards like Loxodon Warhammer and Umezawa's Jitte to see that they can be pretty fantastic in Limited, and even in Constructed), the fact that Equipment is tied down to any one creature at a time gives it a very finite effect on the board. And while that effect can be particularly deadly, the fact of the matter is that it can be maneuvered around. Yes, your Darksteel Axe will make your 2/2s into 4/2s that can trade with most four- and even five-cost creatures, but your opponent's 2/1s will still be able to take down your equipped creature in combat.

Well, if you're looking for a card that will give your opponent some serious headaches, then look no further than today's preview card.

Today's preview card sparked my interest in ways that not many cards do. Of course I love my preview card from last week, Skinrender, and I can think of few cards in the set that I would rather open in my sealed pool this weekend.

Just because Trigon of Rage pumps power, it does not mean that it is only good on offense. Actually—far from it—Trigon of Rage is just as powerful on defense as it is when you are attacking.

Trigon of Rage will make combat really difficult for your opponents. Even your littlest, least threatening creatures become positively frightening when you have an active Trigon of Rage. Suddenly, your Copper Myr can trade in combat with a 4/4. The Leonin Arbiter that you took early in the draft, because you want it for your Extended deck, will be able to hold off 5/5s.

Heck, if you have a simple Trinket Mage to go along with a Trigon of Rage, your opponent won't be able to attack you with an active Rusted Relic—that is, unless he or she wants to trade a 5/5 for your 2/2.

A Darkslick Drake can shut down pretty much any potential offense that your opponent could be considering.

Just because Trigon of Rage has a red activated ability doesn't mean that you should think of it as a red card. In fact, Trigon of Rage is probably at its best in decks with black or green in them.

Why? Well, there are no infect creatures in red, but there are black, green, and artifact creatures with infect. And while it's certainly nice to pump an extra 3 points of power into any unblocked, attacking creature, it's particularly deadly if you pump up an infect creature as you only need to put ten poison counters on your opponent to win the game.

Reusable combat modifiers (especially ones that pump power) are always useful, but if you are trying to kill your opponent with infect they become pretty frightening.

A Trigon of Rage along with a 2/2 creature with infect means that it will only take you two attacks to kill your opponent. 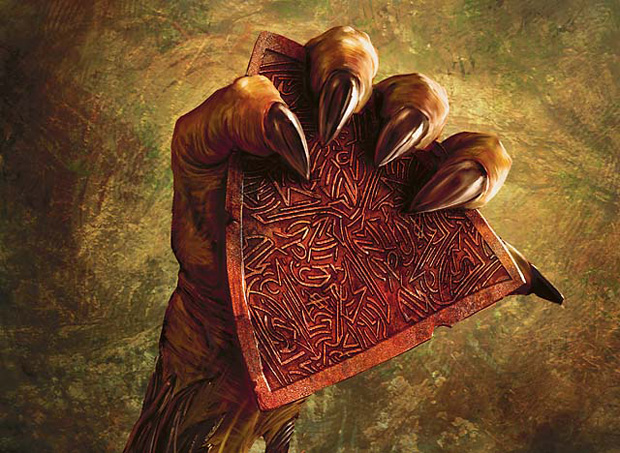 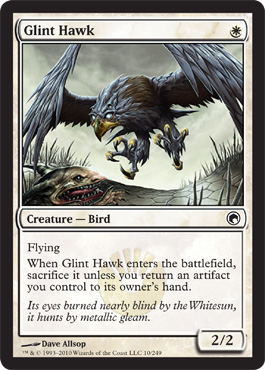 Looking for a Scars of Mirrodin Prerelease near you? Then check out the Prerelease locator. And if you just so happen to be in New York this weekend, I will be taking on all challengers at Gray Matter Conventions' New York Prerelease

I hope to see you there!