his week, Vintage Masters comes out.

There is a hushed silence in the hardcore draft circles in which I travel. The beginnings of mysterious ailments threaten work days and class days alike. Software updates and hard drive scans have been initiated. Twelve-packs of soda pop, bags of snacks, and eye drops: purchased.

So what happens when it finally arrives? What is your game plan?

If you are like most people who take their drafting seriously, you'll be reading up on the Card Image Gallery. You'll also probably take in an article or two about the set, maybe even a podcast if you are so inclined. Then it's time to don the dive goggles and jump in headfirst. I don't have any problem with this plan. I think that the best possible way to truly learn something is by doing it yourself.

The articles and podcasts and chats with your friends will help give you a base from which to start, but none of it can replace the knowledge gained from doing the drafts yourself. One of the big keys to improving at almost anything is to do it yourself and then seek out guidance from other sources. This way, you can form some baseline ideas that are rooted in personal experience and not theory. When you get good advice from someone, you'll have a better idea of how to apply it.

This is especially true for Vintage Masters, as the cards are so darned old that many people won't have played with them before. I'm pretty stoked to cast my first Battle Screech.

Rares and mythic rares (and special rares) are often the most powerful cards available for us drafters. Commons are what make up the majority of our decks and therefore guide which archetypes are going to be the most powerful in a given format. Uncommons live in a sweet spot where they get to be powerful, but we also get to have a reasonable expectation of actually picking them somewhat often. It would be unwise to plan on picking any individual rare in a set, but uncommons? Those you'll be seeing around.

As such, some of these cards are either going to be completely new to you or maybe you'll have heard of them but not actually played them before. Since we are talking about Draft, I am going to focus our discussion this week on a few selected uncommons from Vintage Masters.

I was going to get all cute and save this for last, but heck with it.

Here it is, FTK. (If you have ever heard some Magic person say "FTK," this is what that person was talking about.) One of the most powerful creatures ever printed, Flametongue Kavu took a while to earn my respect. You see, my first time playing FTK was in Cube, where there is incredibly stiff competition from other creatures. Flametongue Kavu ended up not just making the cut, but excelling.

They don't make cards like this very often, anymore. The 4 damage it deals when it enters the battlefield is enough to kill all but the most resilient threats. It then becomes a quick clock even if it has no friends alongside it. Seriously, the list of things this creature kills is impressive. Just a good old-fashioned, straight up two-for-one if there ever was one.

One thing, though: FTK was made in a time where optional enters-the-battlefield triggers weren't much of a thing, and its trigger is no exception. If you cast it with no other creatures on board, you just went from two-for-one to zero-for-one. Avoid that scenario if possible. 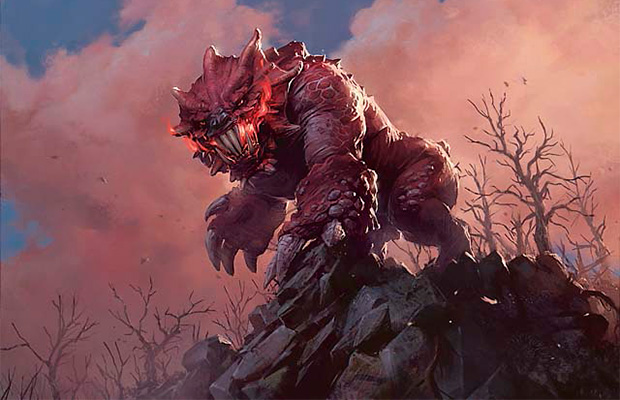 Frequent readers of this column are no doubt in touch with their inner Vanilla Test. A quick comparison of power and toughness to casting cost, the Vanilla Test serves as an incredibly useful baseline for evaluating a creature.

How does Su-Chi hold up to the test? Excellently.

Remembering that Su-Chi is colorless; getting a 4/4 for four mana in any color is quite good. Still, this is Vintage Masters and a vanilla 4/4 probably won't get the job done on its own. Even if that is true, it's hard to imagine Su-Chi being actively bad in too many decks.

The coolest part about Su-Chi (besides the artwork) is that it used to have a potential drawback that is no longer a drawback, but instead a bonus. You see, before the Magic 2010 rules changes, any mana left in your mana pool that wasn't used at the end of a phase would simultaneously disappear and "burn" you for that much damage. After carefully considering the upside to keeping mana burn as a rule, Wizards decided to drop it.

Which means that Su-Chi is no longer a risk, but instead a potential benefit. I'll admit, it's not easy to take advantage of the ability, as Su-Chi will often die mid-combat or on our opponent's turn. A sacrifice outlet or sweeper effect could easily change that, though.

While not on the level of a Flametongue Kavu, you don't want to overlook Su-Chi when big creatures for an attractive price are what you need. 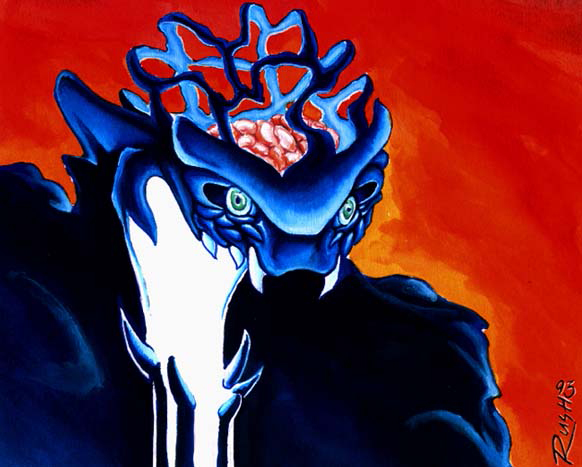 Goblin Trenches is a gold card, so it's not going in every deck, but the decks that it does see play in will be way better for running it. There are some interesting fundamental things about Magic that are rarely broken by R&D.

Most of them have to do with trading one resource for another. Necropotence (also in Vintage Masters, by the way) lets you trade points of life for cards from your library. This proved problematic.

Cadaverous Bloom let you trade cards in hand for mana. Squandered Resources allowed you to trade lands on the battlefield for mana. This proved very problematic.

More recently, Phyrexian mana let you trade life points for mana. While not as egregious as the previous examples, this too bumped dangerously close to the problematic line.

Goblin Trenches is kind of like this, but less broken. It's like the Limited version of these Constructed examples.

It lets you trade unwanted lands for very wanted creatures. You have to pay mana, so the process takes a little bit of doing, but it's game-changing when it happens.

Imagine a fairly normal curve-out for an aggressive red-white deck. You play some creatures, maybe you use some removal. You draw the land you needed to play your six-drop on time, and now the game has entered the stage where you are topdecking and just hoping for a place to dump all that mana you have.

Goblin Trenches turns that situation into a near auto-win. For every land you sacrifice, you get two 1/1 token creatures! If you have done an even halfway respectable job of beating down your opponent in the hallowed Boros tradition, that should be more than enough to finish off him or her.

Not only are the tokens great because they make racing almost impossible, they also get to ignore any huge solitary blockers getting in the way. You can just simply take a turn or two to cash in your lands for creatures and attack with all of them once the legion has been assembled. 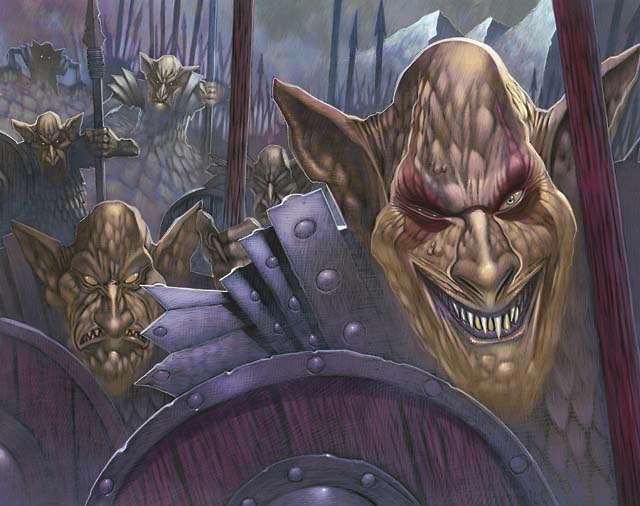 Rarity shifts were aggressively used in Vintage Masters to help balance the format. Prophetic Bolt was the lucky recipient of just such a "downgrade." It's actually kind of mind boggling that a card this powerful is going to be available at uncommon. We are talking about a Cube-quality card here, folks.

The more you read, the better it gets, too. Five mana is kind of a lot, and it is a gold card, but boy does it reward you. As we talked about with Flametongue Kavu, 4 damage is enough to kill many of the peskiest threats. So that's good.

It also hits players. Yep, you can just finish off your opponent by throwing a little lightning right at the dome.

On your opponent's end step. Because it's an instant!

You also get to draw a card off of this. Nope, it's even better than that. You get to draw the card of your choice from the top four cards of your library.

Another classic two-for-one card with serious upside, Prophetic Bolt will be splashed for and picked early and often. I'd warn you to play around it, but there isn't much you can do against a card this powerful.

Maybe better to just pick it yourself. 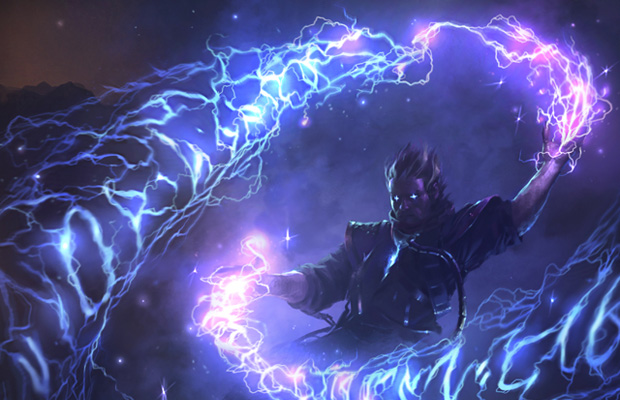 Fireball was reprinted in Magic 2010 , M11, and M12, so it wasn't eligible for Vintage Masters. Our friends in R&D had to go a little deeper to find a suitable X spell, and that they did. Kaervek's Torch isn't quite as versatile as Fireball, but it is harder to interact with and gets the job done most of the time.

Since effects like this have been around since Alpha, it can be easy to overlook them as old news. But if Alpha were a more draftable format, Fireball would be a pretty easy first pick a lot of the time.

It may not be clever or flashy, but Kaervek's Torch will end many games of Vintage Masters. Don't overlook it, and remember that it's splashable as well. 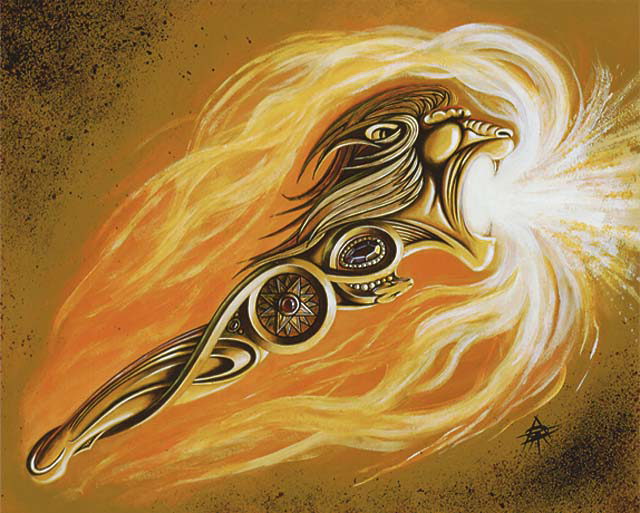 For this last one, I wanted to point to a build-around-me uncommon, and I chose Lightning Rift. This is exactly the type of card that is super easy to overlook because it's got a bunch of conditional text on it. If it costs

and doesn't do at least 3 damage at instant speed, I'm a lot less interested in it. Taking the time to read Lightning Rift will pay dividends, however, if you manage to build around it properly.

It feels like Lightning Rift was made in a time when R&D didn't have a lot of faith in us drafters to brew. They made it enticing to go for this archetype, as nearly free Shocks add up quickly (especially in a format with plenty of morphs running around, like Onslaught).

To see how they view similar cards these days, look at Knowledge and Power. They make us work hard for our build-around-me uncommons, but back in the day you didn't have to put in as much effort. Lightning Rift triggers when either player cycles a card, only costs one mana to activate, and costs just two mana to cast. Not a bad little package.

Of course, you need a lot of cyclers in your deck to make it great. Multiple Rifts helps make sure you always have one around, but since they don't affect the board on their own, things can get risky.

At this time, I don't know for sure if there is a full-on Lightning Rift deck out there, but I aim to find out. 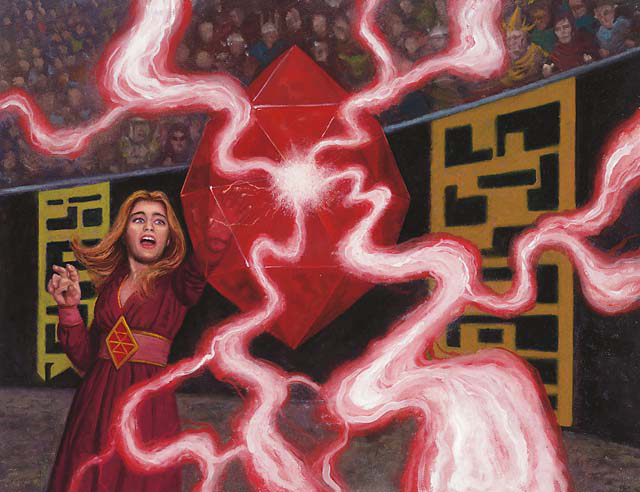 I picked but a few of the 80 uncommons from Vintage Masters. This set is big, has five rarities, and looks like a total blast. I hope you enjoy it as much as I hope to enjoy it!