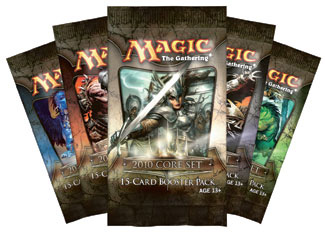 In a Shards block draft, you generally care about what shards people are drafting, not what individual colors they are in. So even if you think that Esper and Grixis cards are being sucked up by the players to your right, that doesn't mean that you shouldn't be drafting black. In fact, that might put you in a perfect place to draft Jund and get a bunch of late Putrid Leeches and Rhox Brutes when pack 3 rolls around.

But in a Magic 2010 draft, you care immensely about what colors your neighbors are in.

Because of this, you have to pay extra attention to how quickly colors dry up for you in M10 drafts. You might start off your draft with a Tendrils of Corruption and a Consume Spirit, but if you aren't seeing much good black after that you might need to jump ship and find a different base color.

Just because the players to your immediate right are drafting black heavily doesn't mean that you can't draft black profitably. While it's unlikely that you will get enough high-quality cards for black to be a main color, there are still plenty of opportunities for you to pick up some good black cards.

If you can feel that black is being cut off in the first pack, that means that your neighbors to your left can too. That means that you might be able to pick up a couple of good black cards in pack 2.

You might get an Assassinate and a Gravedigger that you can play off of a Terramorphic Expanse and 2 Swamps in your blue-white deck. Or you might be able to play a slightly larger black splash in your nearly mono-white deck.

The Significance of Color Combinations

In a Shards block draft you would care about how many people were in specific shards or two-color combinations. If there were three other Naya drafters at your table, things probably wouldn't turn out well for you if you were also drafting Naya. If you were in a very underdrafted shard, your deck would often end up great even if the player to your right were drafting the exact same shard.

But in M10 Limited, it doesn't matter all that much what color combinations the people at your table are drafting. You pretty much only care about how heavily each color is being drafted and whether those colors are being drafted as base colors or splash colors.

There might be a bunch of people at your table that are looking to splash black for Assassainates and Doom Blades, but if none of them are playing black as a base color you'll be able to watch the Consume Spirits and Tendrils of Corruptions fall into your lap.

Red and the Base Color Dilemma (Anticipating a Splash)

Red has some very impressive cards at common and uncommon: Fireball, Lightning Bolt, Prodigal Pyromancer, Dragon Whelp, Goblin Artillery, Pyroclasm, and Seismic Strike, to name a few. These are all cards that you would be happy to first-pick in a deck that can support them. 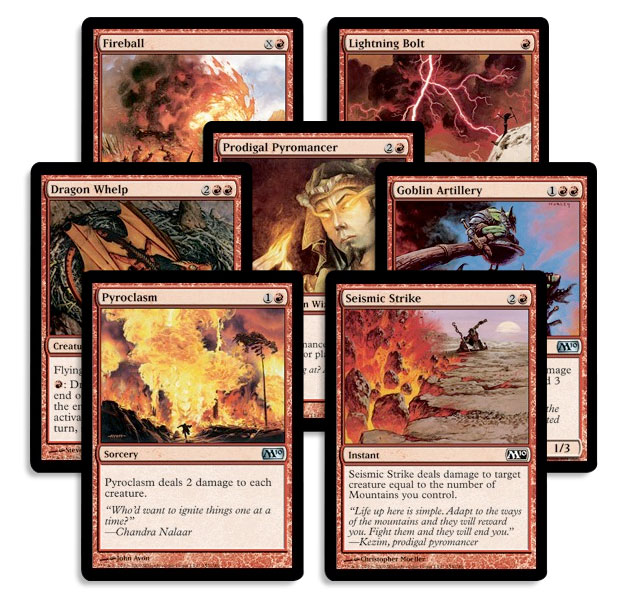 Seven first-pickable commons and uncommons in a single color is a lot for a set the size of M10. But that doesn't mean that red is a great base color. In fact, quite the opposite is true. After the premium red commons and uncommons, the next best cards are things like Sparkmage Apprentice, Canyon Minotaur, and Act of Treason.* And those simply aren't very impressive.

* I haven't had enough of a chance to play with Stone Giant or Inferno Elemental yet. Those might turn out to be much better than I am currently giving them credit for. 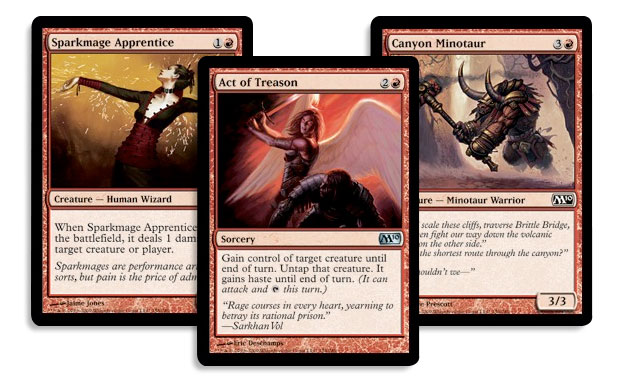 The problem with red as a base color is that it has a lot of premium cards that cost only a single red mana, a couple of excellent color intensive cards (like Dragon Whelp and Seismic Strike) and then a lot of decent, but unimpressive cards.

The thing is, even players who aren't drafting red are going to jump on the Fireballs and the Lightning Bolts like there's no tomorrow. And while you might be able to pick up Canyon Minotaurs and the like late if red isn't being drafted as a main color by other people at your table, getting some mid-level cards at a discount isn't really going to make your draft.

Red is at its best as a support color. Its creatures aren't particularly impressive and its spells tend to be at their best during the mid to late game.

So don't let getting cut off on red in pack 1 prevent you from picking up a Lightning Bolt in pack 2. Even if that ends up being your only red card, you will probably be very happy with your splash, especially if you have a way to fix your mana such as Rampant Growth or Terramorphic Expanse.

But you don't have to wait until pack 2 to think of that Lightning Bolt as a splash. When I first pick a Lightning Bolt I assume that red is going to be my support color, and that I'll have about 15 cards for my main color to go with 8 or so red cards. But it could also end up being my splash to go with my 12 white cards and 9 blue cards.

Either way, a lot of abnormal things would have to happen for me to play red as a base color in an M10 draft. Because even if it does turn out that I'm the only player, or one of only two players, drafting red as a main color, I won't profit from that anywhere near as much as I would profit from being the only white drafter or the only black drafter.

Switching In (Or Not)

Let's say that it's the seventh pick of the draft and you've got two good white cards, an OK white card and three OK blue cards when you get passed a pack that has Llanowar Elves and Silvercoat Lion as the two best remaining cards. You've been passing a lot of good green cards, but as direct result, you've been getting passed a lot of good green cards.

The Silvercoat Lion wouldn't be a bad addition to your blossoming draft deck, but it might not even end up making the cut. The Llanowar Elves on the other hand could give you a great entry into an underdrafted color.

How do you decide if and when it's worth switching into that underdrafted color that you've been passing all sorts of good cards in? Well, that's a tough question to ask, and it's especially tough when you have to make your pick in less than 30 seconds.

If you decide to switch in too late, then someone to your left will have already switched in and you will only be able to really profit from the fact that that color is being underdrafted by your neighbors to the right in the third pack. In that case, you will "profit" from being in said underdrafted color as much as you would profit from being in a color that was being drafted heavily by the players to your right.**

**If you and the players to your right are drafting a color heavily you will probably get a lot of cards in that color in pack 2 because the players to your left will not have seen many cards in that color. This is equivalent to moving into a color "too late" because someone on your near left will almost certainly have moved into that color by that point, meaning that you won't get much of it in pack 2, leaving you with a good pack 3 to look forward to. In both scenarios you get one profitable pack and two unfortunate packs.

But if you are able to identify that a color is being underdrafted in time, you will likely end up with an amazing deck because you were able to properly read your neighbors' signals. So how do you decide?

If it's pick 4 and you get passed something very good like a Howling Banshee, then you'll often want to switch even if you've seeded the player to your left in that color. But if it's pick 7 and you've been feeding the person to your left all sorts of good black cards, it's likely that you've missed your chance.

I'm generally willing to make a switch during the first five or six picks of an M10 draft, but barring exceptional circumstances (such as having only passed one or two good black cards), or a very heavy commitment into one color but not my other, I probably won't be looking to switch any later than seventh pick.

Yes, it sucks to sit back and watch as you see the deck that you could've drafted go by, but it's often worse to throw away several picks to move into a color that you will have to fight with your leftward neighbor over for the rest of the draft.

Just Switch for It

Sometimes you have to switch. For example, if you get a fourth-pick Overrun, you have to take it. I don't care if your first three picks are Air Elemental, Vampire Nocturnus and Consume Spirit, which you passed three great green cards to take. You just take the Overrun.

The card is just so good on its own, and when you get it fourth, you are getting the equivalent of a notarized letter ensuring you that you will be receiving a boatload more green cards.

The Problem with Color-Intensive Cards

Overrun is amazing. Even though it has three green mana symbols in its casting cost, I will do a dance for joy if I open it. But not all color intensive cards are powerful enough to bring about a jig.

Consume Spirit is an excellent example of a card that's not worth dancing over early on. If you are one of very few drafters at the table in black, then Consume Spirit is likely going to be awesome for you. And even if you don't end up particularly heavy black, Consume Spirit will probably still be fine. So first-picking it is good, right?

Unfortunately, not really. The risk/reward on it just doesn't match up. If you are in a very underdrafted color, your deck is probably going to end up being very good. Consume Spirit is pretty much only good when black is being underdrafted. 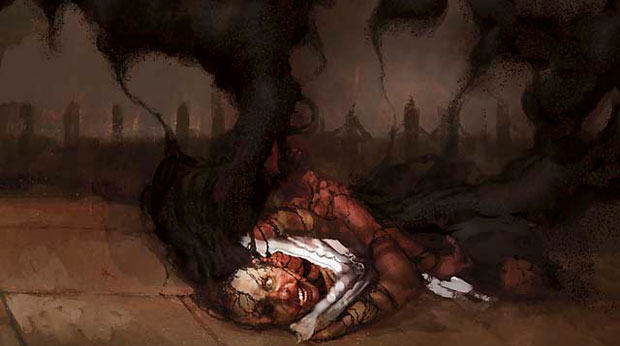 If you take a Consume Spirit early and you don't end up heavy black, you're going to have a nearly unplayable card on your hands. This just isn't a good place to be.

Of course you should be actively looking to pick up Consume Spirits as you progress through the draft, but early on it's just too much of a risk without enough of a reward to justify taking. Don't get pulled in!