Posted in Limited Information on December 23, 2008

While it's always important to find a method for looking at Sealed Deck pools that works well for you, it was especially true during Shadowmoor and Shadowmoor / Eventide Sealed when you needed to lay out 17 (yes, I did say 17!) different piles in order to be able to properly divide your pool by colors.

I should also mention that a great collaborative effort went into making this article. While I was out of commission early this summer, Jake Van Lunen filled in for me and wrote his guide to organizing a Shadowmoor Sealed pool. This article laid the ground work for the organizational method that Gabe Carleton-Barnes and I came up with for Shadowmoor / Eventide Sealed. I don't think that I ever would have been able to come up with a method this clean without the help of Jake and Gabe. (Thanks again, guys!)

I hope you enjoy this trip back to the lazy days of summer.

My problem was that I had no idea how to organize my cards in a way that I could confidently build my deck in a timely manner. And this was with unlimited table space. As my trip to Grand Prix-Madrid (a trip which ended in heartbreak, but I’ll save that story for next week) loomed, I was worried that I wouldn’t know how to organize my sealed pool in a way that I would actually be able to look at it, especially when working on a table that was surely going to be packed full of gamers.

When I met up with my friend Gabe Carleton-Barnes at the airport, I let him know that I was stumped. Turns out he knew exactly how to organize a Sealed pool, but he didn’t know how to trim it down. After fiddling with a few pools, we were able to combine our knowledge and come up with a simple, efficient way to build Shadowmoor/Eventide Sealed Decks.

Step 1: Organize your cards into 17 piles.

While doing this take all of the cards that are unplayable as maindeck cards, and put them into the unplayable pile.

The key piles to have visible are: 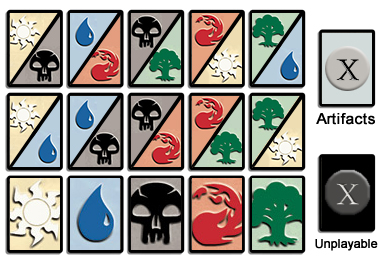 Step 2: Remove a color, and then move all of its hybrid cards over to their other colors.

If you can repeat this process, then you should, otherwise move on to step 3.

Let’s say that you have a color with a couple of good removal spells, and a couple of creatures that are ok at best. That means that you would probably be best off splashing the color if you choose to play it at all.

If you can do any additional trimming at this point, you should do so, otherwise, move onto step 4.

This step makes it a lot easier to visualize your deck. After you’ve organized your deck by mana cost, you might have to repeat step 2 or step 3 a couple of times before you get a good feel for the way, or a couple of different ways, your deck could look like. At this point you make the final trims and you have yourself a Sealed Deck!

(Note that steps 2-4 can be done in any order; I’ve written down the order that I most commonly do them in, but if you feel that you want to organize your cards by mana costs immediately after making your 17 piles, then do it. The goal of this process is to help you see your cards better. Because of that, you should only follow the order that I outlined if it feels appropriate to do so.)

One thing to keep in mind when cutting colors is that even if the mono-colored cards look weak, there might be a number of cards with hybrid-hybrid-hybrid in their casting cost that might make you want to play the color. For example, even if your mono-white cards aren’t very good, if you have a Plumeveil, an Unmake, a Kitchen Finks and a Fire at Will, you might want to seriously consider playing white.

Not completely clear on how this method works yet? No problem! Gabe and I will walk you through a sealed pool from 20,000 feet.

And here’s what the pool looks like spread out correctly. 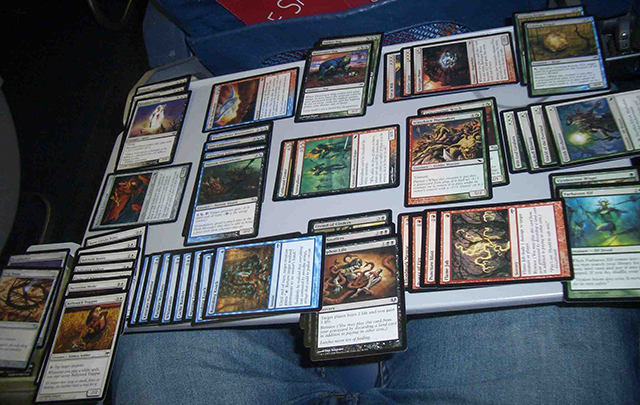 Now that we’ve got our deck all laid out, let’s figure out what our weakest base color is. Turns out this one is painfully obvious. 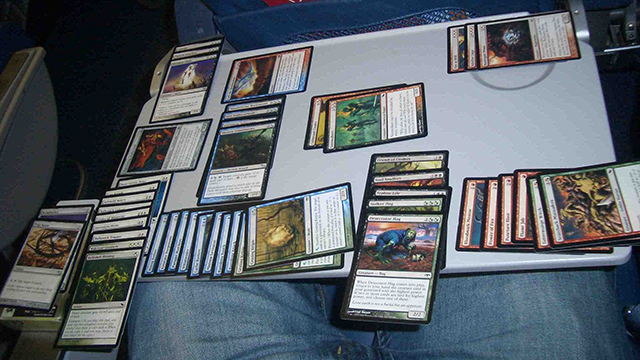 The first base color that we can cut is green, as it contains only a Farhaven Elf and a Viridescent Wisps as playable cards.

With the green out of the picture, it’s time to start moving things around. 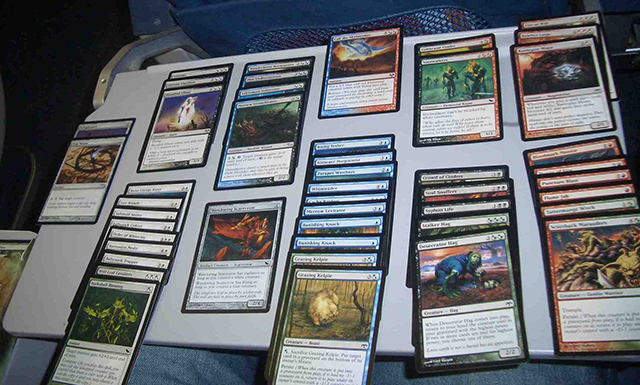 The next thing that jumps out at me is that even though red has some very good cards, it just doesn’t cut the mustard as a main color. While we will almost certainly play at least Puncture Blast and Power of Fire, and we might play Flame Jab and Scuzzback Marauders, the Bloodmark Mentor and the Tattermunge Witch have to go.

Once we do that, we also have to move my Sootwalkers over to the black pile, Call the Skybreaker over to the blue pile and our Battlegate Mimic, Fire at Will and Balefire Liege over to the white pile. 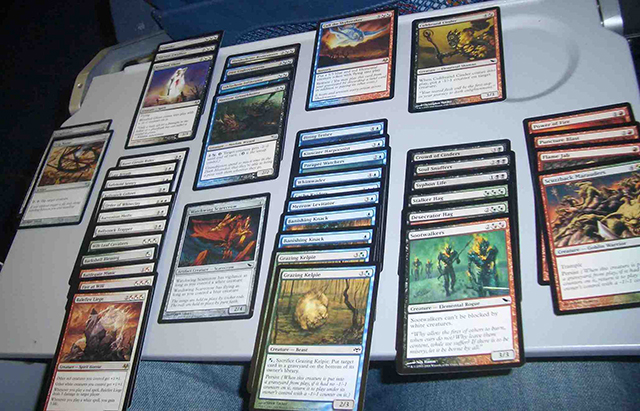 We now have piles that look a lot like the non-hybrid Sealed pools we’re used to working with. The only problem we have right now is that it isn’t quite clear what the next move should be. The white is obviously very good, and will almost certainly be one of our base colors, but the black and the blue don’t look that different from one another. Time to fix that by organizing our pool by mana cost! 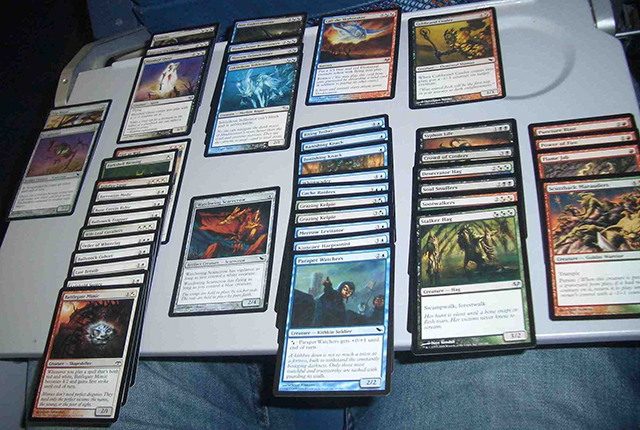 After curving out the pool, it looks like our blue is a bit weaker than I might have thought. The Biting Tether is awesome, and is definitely going to make our deck at this point. The Banishing Knacks are quite good with our numerous untap effects, so they could easily end up in the deck since we are already going to be splashing blue.

But aside from those, we have Parapet Watchers, Kinscaer Harpoonist, Merrow Levitator, 2 Grazing Kelpies, Cache Raiders, and a Whimwader, which probably aren’t going to get to see the light of day in our deck. What do things look like if we reorganize with blue as a splash? 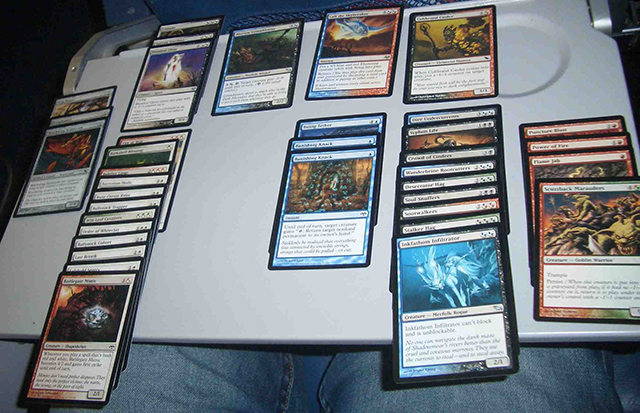 Now that we get a chance to see the black (as a main color) stand up against splashing both the blue and the red, it really doesn’t have much going for it. We can say goodbye to Dire Undercurrents, Wanderbrine Rootcutters, Inkfathom Infiltrator, Merrow Grimeblotter, Syphon Life, Crowd of Cinders, Soul Snuffers, Sootwalkers, Desecrator Hag and Stalker Hag. 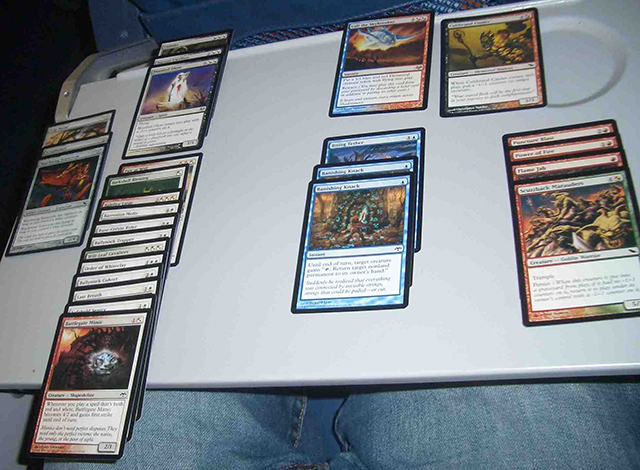 And now we’re officially in the end game. Time to organize our cards into the outline of a deck. 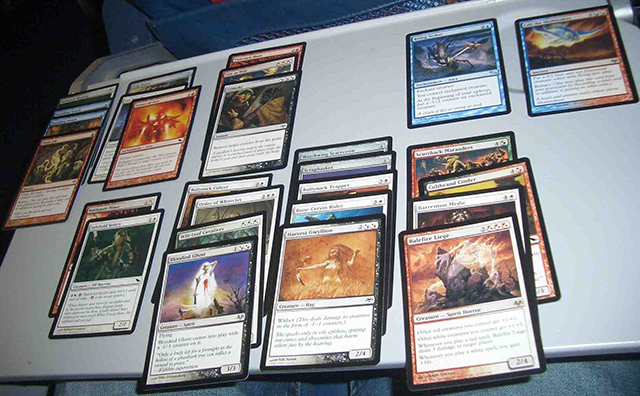 Twenty-seven cards, and they don’t look bad at all. Now we figure out what our last cuts will be. We need to get down to 22 cards, because we need 18 lands to support the Call the Skybreaker.

Of these 27 cards, the two Banishing Knacks, the Watchwing Scarecrow, the Scrapbasket, the Scuzzback Marauders, the Barkshell Blessing, and the Battlefield Mimic all come to mind as non-essential pieces. Of them I think that the Scrapbasket and the Watchwing Scarecrow are the easiest cuts as we already have a number of better four-drops. That leaves us with just 25 cards, but the remaining cuts become a lot harder.

At this point I moved the Wilt-Leaf Cavaliers, the Unmake, and the Fire at Will into the four-slot because I know that I won’t be able to cast them with 100% reliability on turn-three.

The next cut I made was the Scuzzback Marauders. Gabe and I talked over the merits of each of our 5 drops, and Scuzzback Marauders got the short end of the stick. Balefire Liege is obviously the best of the bunch and Barrenton Medic combos quite well with Power of Fire and Banishing Knack. That left the choice down to Cultbrand Cinder or Scuzzback Marauders, and we decided that we needed another utility creature instead of another combat creature.

The next cut that we made was a Banishing Knack. We decided that we would be playing a 12 Plains, 4 Mountain, 2 Island mana base, and that just doesn’t go well with three blue spells.

And just like that we were down to the final cut. 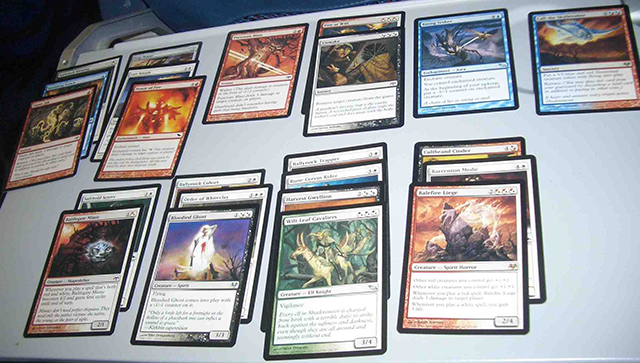 The options as we saw them were Banishing Knack, Barkshell Blessing, Flame Jab and Battlegate Mimic, but all of these cards felt very essential. Without the Banishing Knack, we would be extremely vulnerable to the hybrid auras, and we might have trouble breaking through in the late game.

Cutting the Battlegate Mimic would have brought us down to 11 creatures (though Biting Tether makes it more like 12) which just wasn’t something I wanted to do with this deck, especially if we were keeping in the Banishing Knack and the Barkshell Blessing.

Cutting the Flame Jab felt wrong as it is extremely powerful on its own, and we had Balefire Liege to combo with (4 damage per land is pretty amazing).

Looking outside of those options we saw Last Breath. As good as Last Breath is, we decided that it was the least essential card in our deck as we already had a good number of ways to deal with small creatures.

Aside from the final cut (which I’m still not sure about), I was very happy with how we built the deck.

This process has made building SSE Sealed Decks very easy for me and I’m confident that it will for you too!

Posted in Limited Information on December 23, 2008