his weekend is Grand Prix Las Vegas. The format is Modern Masters, with Sealed Deck on Day One and Draft on Day Two. The event will showcase Modern Masters as a set and will be the broadest stage it will appear in. It's sure to be an exciting event, and I am eagerly anticipating doing the commentary for it.

One of the main reasons for this is that I don't know what to expect. I'm not sure if the players do, either. The format is so diverse and powerful that there are many different archetypes and directions one can go. Since the first day of the competition is Sealed Deck, the players won't have quite as much control over what decks they run as they will in the second day.

I had a chance to ask some of the best Limited players in the world a simple question while I was covering Grand Prix Providence. I asked which single card they wanted to see the most in their pool in Las Vegas. After some hemming and hawing, most of them came to a similar conclusion.

The answer may surprise you, but only if you haven't played with the card in question. The answer I received the most wasn't a creature or even removal. It was this:

Sure, there are huge Dragons, sweepers, finishers, and value cards to be first-picked, but when pressed, the pros agree: Swords are where it's at. If you haven't had the pleasure of equipping a Sword of this caliber in a game of Limited, I must say, you are missing out.

Sword of Fire and Ice (and Sword of Light and Shadow as well) turn your normal forty-card Limited deck into a combo deck. The combo pieces are:

That's it. That's how good the Swords are.

They also have the benefit of being colorless, meaning they will slot into essentially any deck worth submitting. This provides more room to decide which direction to take your deck. But you still get a measurable power upgrade regardless of your final color combination. Opening and playing Sword of Fire and Ice is a great place to begin a campaign to the Top 8.

I have covered the basics of what the Draft archetypes look like in this column (Part 1, Part 2, Part 3). Which is the strongest is still up for debate. When it comes to Sealed Deck play, there are also many open questions.

The average power level of a card in Modern Masters is high. Sealed is already a fairly bomb-dependent format, and I don't think that Modern Masters is the exception. If anything, it might be even more bomb-driven than any set we have seen in recent memory. One of the interesting things about Modern Masters is that the bombs often dip down into the uncommon slot. Take a look at a few of the powerful uncommons from Modern Masters: 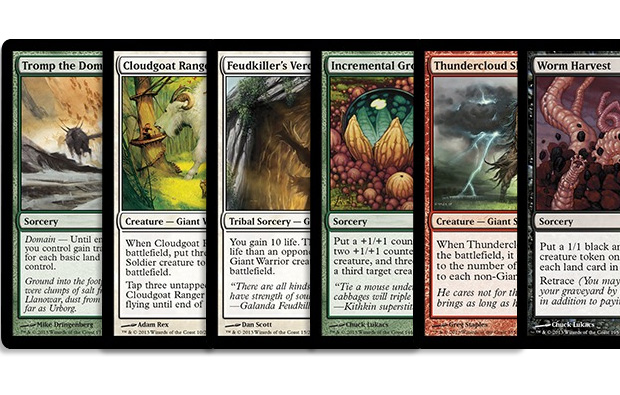 This group of cards has everything from game-ending spells to build-around-me cards with incredible late-game power. When a set has uncommons at this power level, you know you are cooking with gas.

The mythic rares are also impressive. With the full cycle of legendary Kamigawa Dragon Spirits flying around, it's not a stretch to consider that many of the big bombs will come from the mythic rare slot.

Cards like Elspeth, Knight-Errant; Vedalken Shackles; and the aforementioned Swords round out what is sure to be a focal point during the Sealed Deck portion of the tournament. 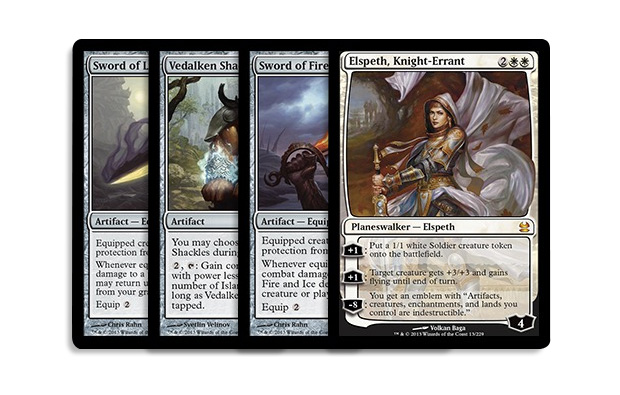 There is another cycle at Uncommon that I would be remiss to not mention: 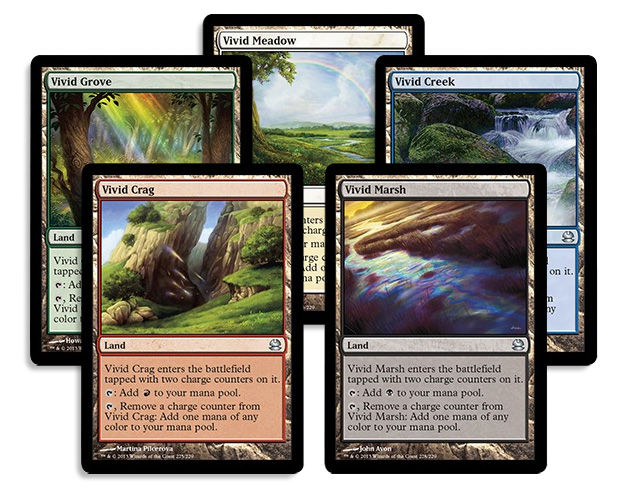 It's hard to properly gauge the power level of lands like this. They look fairly innocuous at first glance, but the impact they can have on a deck is profound. Entering the battlefield tapped is cumbersome, but the payoff is well worth it, as these lands open the door to some extreme splashing. The lucky people who open two or three of these in their sealed pools will have plenty of flexibility during the deck-building portion of the event.

Splashing off-color removal or a bomb you wouldn't be able to support otherwise is what can take a good deck and make it into a great one. The opportunity cost on the Vivid lands is very low, especially in Sealed. I expect to see a lot of dice on lands on both days of the tournament.

As much fun as Grand Prix Las Vegas will be, I am reminded that we have another Limited format to look after. Drafting the full Return to Ravnica block has been an interesting journey so far. I have gone back and forth on a few cards, and even entire strategies seem to wax and wane in power level from week to week.

I want to take a closer look at an archetype I have found to be both fun and powerful: RUG. Red, blue, and green is my favorite three-color combination in Magic. It offers a mix of removal, card draw, and beef that other archetypes cannot.

Let's take a look at some of the highlight cards from Dragon's Maze for the deck.

These are two premium commons that do their job well, whether that is attacking or blocking. Thrashing Mossdog is arguably just better than Giant Spider (or Towering Indrik, as it were). A 3/3 is a nice attacker when you want to beat down, and when you don't, it blocks most of the fliers in the set profitably. (By "profitably" I mean that it either outright trumps the attackers or at least trades for them.)

If beating down is your thing all of the time, then Rubblebelt Maaka might be your choice. Making a Hill Giant that is essentially a Giant Growth if your creatures are attacking ensures that the Maaka will be part of many victorious battles.

As far as removal goes, there are some options for the deck:

Blast of Genius is one of the most powerful and fun removal spells to resolve in Limited. It almost always kills what you want it to kill, and it has the extra bonus of drawing you cards and filtering out bad ones from your hand.

Turn & Burn is one of the most guaranteed ways to obtain the elusive two-for-one. It usually requires some sort of blocking situation, but beyond that it doesn't ask much more than the five-mana needed to fuse it. A great answer to resilient bombs and two-drops alike, it's one of the best removal cards in the whole block.

Punish the Enemy makes a bold claim and then backs it up. It removes some difficult-to-kill creatures and slaps the creatures' owners on the head while it's at it. Five mana is a lot, but Punish the Enemy delivers.

Krasis Incubation is almost too good to be true. Functionally it's Arrest, but in a color scheme that doesn't get Arrest or anything near it usually. It compares favorably to One Thousand Lashes, which is saying a lot for a green and blue removal spell, of all things.

Runner's Bane is a cheap and useful way to take out anything with 3 power or less. Sure, it's a little vulnerable to pump spells (if the enchanted creature's power is higher than 3 at any time, Runner's Bane will fall off), but it more than makes up for it in cost and immediate board impact.

Beetleform Mage and Zhur-Taa Druid are two cards whose value has gone steadily up for me since the set came out. Often first picks, they reward your early color commitment by being more powerful than most cards in this category. Zhur-Taa Druid acts as both mana ramp and as a damage source. Beetleform Mage is a lot like an Air Elemental but with the option to just keep it small and usually unblockable.

Nivix Cyclops is a sometimes-powerful creature that fits into a certain game plan well. The bottom line on this card is that if you are unwilling to run a 1/4 for three mana, you should likely look elsewhere. Its primary role is to block, and then get in for damage after the dust has settled. The damage adds up really fast, too.

There are some nice finishers available too:

Fluxcharger is like a supercharged version of Nivix Cyclops. It blocks well; can ping away in the air; and just when your opponent least expects it, it hits for 5 damage in the air. That's a big hit, and the fact that this card can play double-duty on defense makes it an easy inclusion in all of the RUG decks I have drafted.

Armed & Dangerous just wins games. If you are behind on board, it often won't do much, but if you are at parity or ahead on board, the game just ends. That is a trait worth looking further into.

I hope to see many of you at Grand Prix Las Vegas, either in person or on the coverage stream. It will be a unique event and one that will be remembered for a long time, I think.