roliferate is a very powerful, and very easily misunderstood mechanic. While it may be difficult to build a "proliferate deck" there are plenty of decks, and cards, that can benefit greatly from being able to add additional counters at little to no cost. 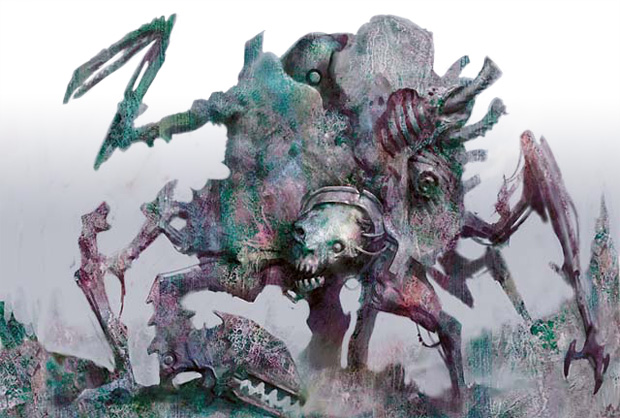 Let's start with one of the simplest examples—Fume Spitter. In pretty much any Limited format Fume Spitter would be a good card. It can kill mana creatures, it can kill a lot of utility creatures like Myrsmith, it can take down Blight Mambas, it can give your opponent a serious headache when trying to figure out his or her next combat step, etc. There are plenty of good things that you can do with this little Horror—and all for the low, low price of a single black mana.

But bring proliferate into the mix, and suddenly that -1/-1 counter can multiply and take down everything from Plague Stingers to Indomitable Archangels.

That's not bad at all for a one-mana creature that easily could have gotten some damage in before your opponent was able to start casting spells—but it (admittedly) isn't that exciting either.

But what happens when you start combining proliferate with cards that regularly churn out and/or eat up counters?

Before we get into the powerful interactions that you can have with proliferate, lets take a look at the proliferate cards in the set. 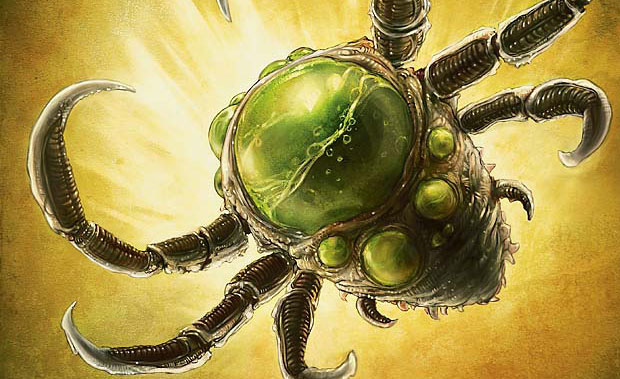 Contagion Clasp and its bigger brother Contagion Engine are both more than worth the price of admission.

Without the ability to proliferate for four mana, Contagion Clasp would still be a playable card—giving you a way to kill mana Myr, Riddlesmiths and Vedalken Certarches at the drop of a hat.

And in case you were wondering, being able to kill mana Myr is a really good thing. A lot of people build their Scars of Mirrodin Limited deck with sixteen lands and four mana Myr—often times these decks are splashing a third color on the back of a mana Myr and a single basic land of the splashed color. This means that if you are able to kill a turn-two mana Myr you stand a very good chance of mana-screwing your opponent, keeping them off of key plays for many turns, and potentially keeping them off of a key color for much (or maybe even all) of the game.

Yes, killing mana Myr is more important than it might seem. So if you get the chance to pick up Fume Spitters and/or Contagion Clasps, you shouldn't hesitate to do so.

But killing 1-toughness creatures at sorcery speed isn't all that Contagion Clasp can do. Not by a long shot.

Because Contagion Clasp also allows you to pay four mana to proliferate, suddenly you have a card that can take down pretty much any creature given enough time. Contagion Clasp is definitely a card worth taking early—so much so that I'm willing to first-pick it given a weak pack.

When I was at the Prerelease two weekends ago I lost more games to Contagion Engine than to any other card. Pretty much every time one of my opponents cast a Contagion Engine I was shuffling up for the next game a few minutes later—and it wasn't because I had won.

If I am fortunate enough to see a Contagion Engine in my opening pack, there aren't too many cards that I'd be willing to take over it.

Thrummingbird is really good in the right deck—allowing you to proliferate every turn at no cost and get in for a point of damage, if it survives and if it is able to get through unblocked.

While I wouldn't want to take Thrummingbird too early because of how fragile it is, I'm more than happy to add it to almost any deck that features blue cards and a couple of good ways to make or use counters. (Note that I'm hoping to be proved wrong on this—I would love it if Thrummingbird turns out to be an excellent early pick and I just don't have enough experience with the format to see it yet.)

Steady Progress is a decent card, but it shouldn't be looked at in quite the same light as the other, reusable proliferate cards in the set. For three mana, you will usually get enough value out of Steady Progress to warrant its inclusion in any deck that has a good amount of mana sources and some decent ways to give out -1/-1 counters, inflict poison counters, or use charge counters. But it isn't so good that you should expect to see people taking it anywhere before the 5th, 6th, or even 7th pick of the draft (and you should often see it go much later than that).

You shouldn't be at all embarrassed to run a Steady Progress in your deck. If you do happen to draw one you could do some pretty nasty things with it in combat especially if your opponent has a couple of creatures with -1/-1 counters on them. But it isn't something worth taking too early or stressing out about cutting.

Throne of Geth won't be an all-star in every deck. Although, if you are playing an artifact-heavy Golem Foundry deck, or an infect deck with a lot of mana Myr, some Equipment, and a couple of Corpse Curs (who, in case you were wondering, is awesome) then Throne of Geth should be a welcome addition to your deck. And even if you aren't playing a lot of artifacts, if you have a few mana Myr and some good things to do with counters then you might want to include Throne of Geth just to get a couple of activations in.

Inexorable Tide seems awesome to me. While I haven't had the chance to play with or against this blue rare yet, I'd be happy to first-pick one if I saw it and then start putting together a proliferate deck. Being able to proliferate turn after turn at no cost is worth going out of your way for.

But that's not all!

Because infect creatures do damage to creatures in the form of -1/-1 counters, each time you proliferate you will be bringing your opponent's creatures one step closer to their demise. 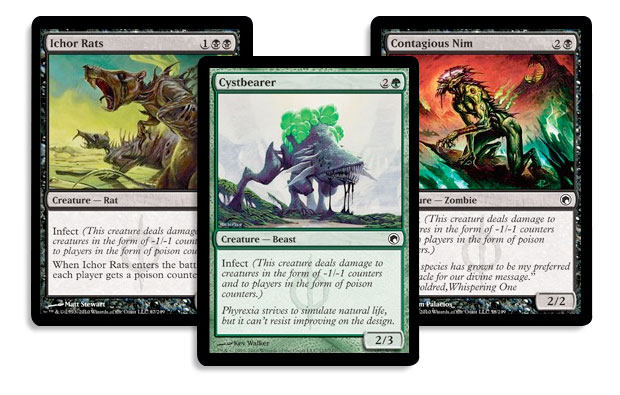 Given a couple of proliferate activations, your Ichor Rats, your Cystbearers, and your Contagion Nims will take down creatures of all sizes.

The 1/5 Tangle Angler is good at clearing the way for your other infect creatures to swoop in for the kill—but when you are proliferating you can shotgun a creature pretty much every turn with your Tangle Angler.

While proliferate is good in any deck that can do cool things with counters, if you are also racing to get to ten poison counters on your opponent then proliferate becomes pretty great.

Poison and -1/-1 counters aren't the only types of counters that are getting love from proliferate—in fact, using proliferate to pump up your charge counters is one of the most powerful things you can do in Scars of Mirrodin Limited.

The Trigons are pretty good on their own, but when you start proliferating some pretty crazy things can happen.

Even if you only get three activations out of it, Trigon of Rage is a very good, very intimidating card (especially when combined with infect creatures). But start proliferating, and Trigon of Rage can offer you a never-ending stream of +3/+0 bonuses.

If I'm able to pick up a Trigon of Corruption early, know that I'm going to do everything I can to pick up some proliferate cards to go with it.

While it doesn't do things in quite as direct a way as Trigon of Corruption, a Trigon of Infestation along with a reusable source of proliferate can similarly cause nightmares for your opponent. With this combination, your opponent will be forced to sit back and watch as you gradually wither away all of his or her creatures and poison them to death.

Tumble Magnet is shaping up to be one of the most important cards in Scars of Mirrodin Limited. No, Tumble Magnet might not be the flashiest card in the set, and it might not have a good home in every deck—but when used correctly, this three-mana artifact can absolutely wreak havoc on your opponent's game plan. Dealing with key attackers, blockers, or even mana Myr for several key turns while you are able to take over the game.

Combine Tumble Magnet with proliferate and suddenly you have an Icy Manipulator on your hands—ready to lock down your opponent's best creature for as long as you need it to.

With proliferate, Necrogen Censer goes from being a pretty marginal way to hit your opponent for 4 life (though it is pretty good if you combine it with Glint Hawk or Glimmerpoint Stag), to a reusable way to bleed your opponent for 2 turn after turn until he or she eventually reaches a painstaking demise.

Making Proliferate a Key Part of Your Strategy

When you are drafting or putting your Sealed deck together you will often notice that you have some good interactions with proliferate and you might even go a little bit out of your way to get extra value out of those interactions. 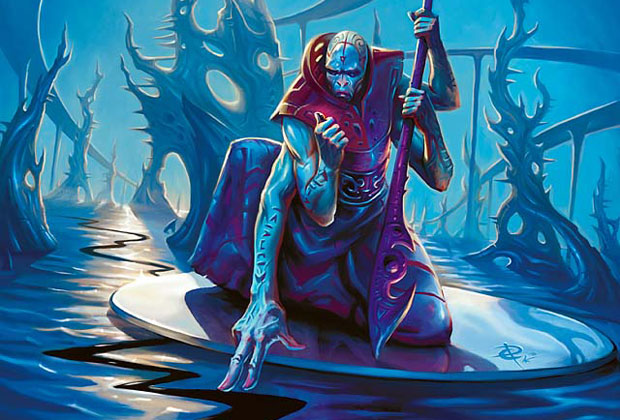 But you can do more than passively take advantage of proliferate, you can look to actively build around it. You can slow the game down a bit by killing off your opponent's Myr with a Contagion Clasp and then put together a deadly combination along with Trigon of Corruption

No you won't always get any devastating proliferate combos, or enough artifacts to put together a Golem Foundry deck, but you should never be disappointed with the fact that you set yourself up for the possibility of something excellent—even if your plan doesn't really come to fruition.

The majority of proliferate cards, like Contagion Clasp and Thrummingbird, as well as infect creatures and cards with charge counters are good on their own. Taking them means you won't be "wasting" picks to try to put together a proliferate-heavy deck, even if you don't get all the pieces. You will still have a bunch of cards that can fit in well in a different sort of deck than the one that you might have been envisioning when you started off your draft with a Contagion Clasp and a Blight Mamba. 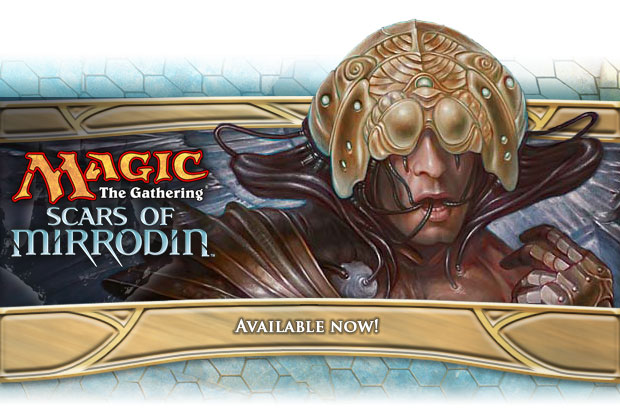