What Does This Card Do For You?

Posted in Limited Information on April 7, 2009

he Alara Reborn prerelease is only a couple of weeks away, but that still leaves us with plenty of time to enjoy Shards / Shards / Conflux Limited. But no matter what format you're playing, when you are looking at a card in a draft pack or while you're building your deck, you have to ask yourself, "What does this card actually do for me?"

Sometimes the answer is pretty obvious; sometimes it might surprise you.

I was recently in the finals of a Magic Online draft with a good, midrange Esper deck against a very aggressive Esper deck that was loaded with Glaze Fiends, Court Homunculuses, and Darklit Gargoyles. My opponent beat me pretty quickly Game 1, but Game 2 I won on the back of Tower Gargoyle and Sanctum Gargoyle. In Game 3, things were going pretty well for me. We had progressed pretty deep into the game and I was ahead on the board and still at a healthy life total. I figured I was in pretty good shape.

Until my opponent cast Ad Nauseam.

The previous times that people have cast Ad Nauseam against me they had flipped up 6+ casting cost worth of spells and wound up dying before they had a chance to let their card advantage take over.

This time my opponent flipped up a bunch of powerful one- and two-cost creatures and beat me to death with them over the course of about two turns. It isn't that Ad Nauseam is a particularly good card, just that in this deck it was amazing.

A Card that Does Two Very Different Things

Absorb Vis and Exploding Borders are both cards that can fix your mana or put some hurt on your opponent's life total. But their primary mode is very different.

I love to play Exploding Borders in aggressive Naya and Jund decks (especially if green and red are my two main colors) or in five-color decks that I think I'm going to get into races with, but I don't like playing it in slower Naya and Jund decks where I often won't have much going on early.

Note that Exploding Borders is also quite good if you are using it to splash one or two powerful cards, so the fact that you can't use it to fix early won't negatively affect your game that often.

Absorb Vis, on the other hand, has enough versatility that pretty much every deck with more than a couple of black sources will want to play it.

While Absorb Vis is certainly a mana fixer first and a Drain Life second, the fact that the card has a very good chance to be relevant early and late makes it pretty special. Exploding Borders, on the other hand, is pretty much only good in the mid to late game, and even then it might not be relevant.

Cards Need to Work When You Need Them

If I'm using a card to fix my mana, I want to be able to use it early. Otherwise what good is it going to do me if I can finally start casting my spells on turn five or six? However, that rule doesn't apply in quite the same way to creatures and removal spells.

Sometimes you will have to play Dreg Reavers or even generic five-mana 3/3s just so your deck has some more sizable plays. If your curve is otherwise good, then these somewhat underpowered five-drops often won't be that much of a burden. Sure you would prefer it if they were better five-drops, or at the very least equivalent cards such as Canyon Minotaur that are cheaper, but you won't always have that luxury.

It's OK to overpay a little bit for a creature or a removal spell if you really need it to fill out your deck. If the choice comes down to a generic 2/1 for two or a six-mana 4/4, you're usually going to want to play the two-mana 2/1, but not always. If you feel that you need a little bit of extra oomph, then you might have to go for that overcosted creature. Similarly, if you already have a number of good things to do early, you will often want to play that five-mana 3/3 instead of that two-mana 1/3.

Of course, that doesn't change the fact that you will only play these types of cards if you absolutely have to. 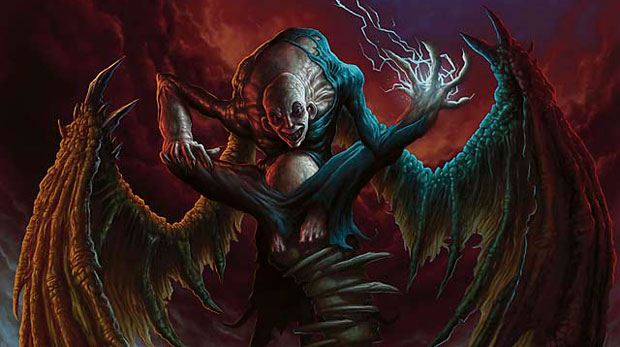 If you are going to maindeck an enchant creature, it had better either have a worthwhile effect if you only get one turn out of it or allow you to dominate the game if it sticks (or both, as the case may be.)

For this reason, it is often OK to play Lightning Talons or Maniacal Rage in aggressive decks. Sure you might get two-for-oned a turn from now, but if you get some extra damage in, or your opponent has to chump-block your creature, then you aren't actually down a card because you got significant value out of your creature enchantment the turn it was in play.

Elder Mastery is a card that I'm particularly fond of. Elder Mastery turns virtually any creature you have into an absurdly powerful dragon. This alone would be worth quite a bit, but the fact that even a single hit with an Elder Mastery–enhanced creature puts you way ahead means that this Aura is well worth the price of admission.

I'm pretty sure that Elder Mastery is currently the most underrated card in Conflux. It's really good regardless of what other cards are in your deck.

But if your deck can't take advantage of a creature enchantment unless you have it going for several turns, then it should almost certainly sit in your sideboard.

When a Card Doesn't Actually Help You

In last week's draft I opened a Soul's Majesty and neglected to even mention it. I apologize if that caused any confusion—it isn't that I think Soul's Majesty is a bad card, just that it was not a card that I needed to consider at all given the contents of my deck.

My deck last week had a very high curve and bad mana. If the game went late, I would need to spend my turns making big plays that would hopefully put me ahead. I would rarely have a chance to play Soul's Majesty until late, late in the game. And even if I did get the chance to resolve it, it might not help me if I was already behind because I didn't really have the capability to cast multiple spells in a turn.

Admittedly, if a game is even remotely close and you resolve a Soul's Majesty, you will usually win. But if your deck already has a lot of late game cards, and instead needs help making the game close so that the deck's big cards can take over, then you're probably better off taking something else.

Instead I took a greatly needed early drop.

Just Because a Card Is Good ...

If you're playing a green deck and you already have three Mosstodons in your five slot, then you don't need to pick up a fourth one. Nine times out of ten you simply aren't going to play it. If you have the chance to pick up something like Naturalize, Volcanic Submersion, or Relic of Progenitus that can be quite good in the right situations, you should go for that. Heck, you might even find yourself taking a Jhessian Lookout over the fourth Mosstodon because you might need it to fill out your curve, whereas there is basically no chance that you're going to want yet another green 5/3.

Don't worry that a card isn't as "good" as another card; if a card is better for you that's all that matters.

This is a deceptively simple concept, but if you have the chance to pick up a card that can be very relevant, or a card that you don't really need, then take the card that might be good for you.

Sometimes your deck will be missing something and you'll have to figure out a way to compensate. It often won't be the ideal way, but you'll often find that you can patch up holes better than you might think.

In my deck from last week's article my curve was sorely lacking, so I had to play an Excommunicate. Normally Excommunicate is used in aggressive decks that are trying to exploit a tempo advantage. In my deck last week I was using it to try to keep myself from falling too far behind while I developed enough mana to start casting my spells.

Excommunicate is a less than ideal card for this job, but it's much better than walking into battle with even fewer early drops than I had (and I was already short early drops).

Sometimes your 23rd card fills a hole in your deck, like an Excommunicate in a deck that desperately needs an extra three-drop. Other times it a card that you would otherwise prefer to have in your sideboard like a Naturalize. But still other times you have to play an obvious 23rd card to finish up your deck. That could end up being an 18th land when you don't really need it, it could be that sad generic five-mana 3/3, or it could be an Onyx Goblet.

So how do you choose which less than optimal card is the best card to finish your deck with?

This is the type of question that used to stress me out a lot, but after a few years and countless successful and unsuccessful drafts, I've come to realize that this is usually a pretty easy question to answer. You just have to look at your deck, and your suboptimal choices, and ask yourself which of these cards is most likely to help your win.

If your deck has a good late game, then Onyx Goblet isn't going to do much for you, so you'd probably be better off with an 18th land. If your deck doesn't have many ways to deal with very powerful creatures, then that Coma Veil might be just the card you're looking for. If your deck has a couple of Sprouting Thrinaxes that you really want to cast on turn three, then that 18th land will be a very welcome addition.

Remember, every card counts, and you should always try to get as much mileage out of your cards as possible—even if they aren't very good in the abstract.

Posted in Limited Information on April 7, 2009