What the Pack Doesn't Tell You

Posted in Limited Information on November 10, 2009

t is often tempting to look at draft picks in a vacuum and try to analyze what the statistically best pick what be regardless of the situation. This type of analysis is almost always fruitful, as it will help you better understand what cards matter in a format, how highly other people value things, what you need to do to reliably execute your desired strategy, etc.

But when you're talking about Magic out of context, there's just so much that can't be quantified. Let's take a look at some of the ways that you evaluate a pack could change depending on what you know about a given draft.

With that in mind, let's take a look at some of the non-obvious considerations that you might want to take into account when you open up your first pack and see this:

In many situations rare drafting is a serious consideration. If you are playing in a 4-3-2-2 queue on Magic Online (awarding four packs to the winner, three to the finalist, and two to each semifinalist), you might feel very inclined to take a rare if you think it is worth several tickets, even if that rare isn't playable in your draft deck. If you see a rare that is both playable and valuable, then it can feel pretty hard to pass it up in a draft that doesn't have a particularly large, top-heavy prize pool. 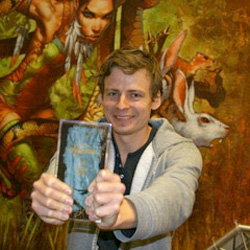 If you were drafting in an 8-4 queue, the Top 8 of a Premier Event, the Top 8 of a Pro Tour Qualifier, or the Top 8 of a Grand Prix (such as last weekend's Grand Prix–Paris), then you would probably evaluate things differently. That doesn't mean, however, you shouldn't grab that valuable rare if you are playing in a draft where the cards that you pick up along the way can have a greater value for you than whatever potential prizes you could win.

Remember, this doesn't just have an influence on the way you draft. It will have an influence on the way the other people at your table will draft too. In a three-round Swiss draft queue on Magic Online, where you win a pack for each match win, you are going to see far fewer rares floating around than you would in a draft with a top-heavy prize pool. When the players around you are snatching up rares, you will have more opportunities at top-notch cards than you would if card value were not an issue.

I don't think that rare-drafting is a "good thing" or a "bad thing." It just is what it is. If you are playing in a draft where players typically do a lot of rare-drafting, and you aren't concerned with the value of the cards that you draft, then you can give yourself a competitive edge over your opponents by only considering the best ways to improve your deck.

Or you might decide to rare-draft at your Tuesday night draft only if a particularly choice card comes your way, or if you feel like your deck is already finished, or ....

What You Know About Your Neighbors 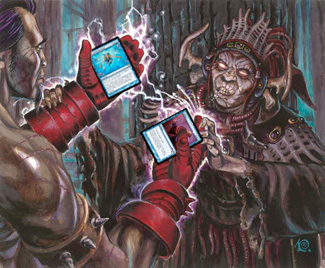 If you are drafting with seven anonymous people on Magic Online, or with seven people that you've never met before at a big tournament or at a new store, then you won't have a clue what to expect from them. In that sort of situation, you are probably going to want to take things as they come, or force your favorite strategy, or lean heavily towards one of a couple of archetypes, or whatever you think that will give you the best chance of winning against unknown opponents.

But if you're drafting with your friends who you see twice a week and you have a good sense of what they like to draft and don't like to draft, then you might want to adjust your strategy in ways that would seem very unadvisable to someone who lacks your knowledge of the players around you.

Let's say you are in a draft and you are sitting to the left of Jon, and you know that Jon loves blue. He loves blue so much that he drafts it every time regardless of what he opens or gets passed.

In this extreme example, you are going to want to stay away from blue in most circumstances. (However, you might be able to take this logic even further, if you know that the person to your left also knows that Jon will try to force blue every time, then you might be able to draft blue knowing that you are likely to get good blue in pack 2. So if you open up a ridiculous blue card you might want to take it .... But I digress.)

Don't be afraid to put the knowledge of the tendencies of your neighbors to work for you. Just be careful not to let it blind you from what is actually going on. Jon probably isn't going to draft blue 100% of the time, even if it feels that way.

In the real world, few players are going to try to draft something 100% of the time. Sometimes the guy who "always" draft white-blue opens up an Ob Nixilis, the Fallen. All of a sudden he's probably going to be drafting black. Or the gal who never drafts white in M10 opens up a Baneslayer Angel. That might change things a bit for her.

Rather than assuming that Jon drafts blue all the time, let's say he drafts blue about two thirds of the time. In this case you are still going to be less interested in blue than you would be if a player with unknown tendencies were sitting to your right, but you are still probably going to consider drafting blue, especially if Jon passes you good blue cards.

Or, more generally, you might know that the players at your draft don't like to draft Allies. In that case, you might want to jump on the Murasa Pyromancer in our bonus exercise pack because you know that you will be able to get a very powerful Ally deck without too much trouble.

Or you might know that green tends to be very underdrafted, in which case you might want to take the Timbermaw Larva.

Or you might know that white is overdrafted, so you will want to stay away from the Kor Skyfisher.

However, you should always be careful not to let your perceptions of the players override the signals that the packs are trying to communicate to you. Sure you can use this knowledge to guide your picks, but if you get passed a Marsh Casualties from a typically black drafter, then you shouldn't feel afraid to take it if it is legitimately the best card in the pack.

My pick out of this pack is the Bladetusk Boar, but the correct pick in the abstract is probably the Kor Skyfisher. 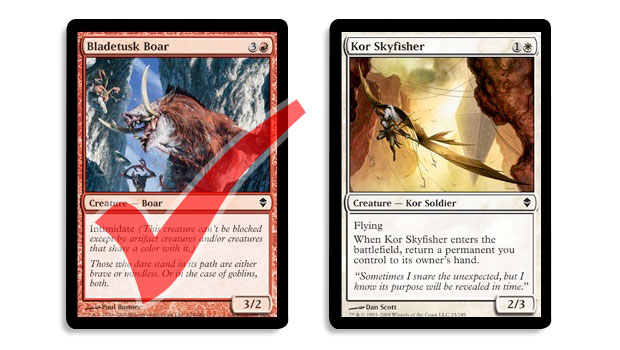 Pound for pound, Kor Skyfisher is a better card than Bladetusk Boar (because of landfall and other "enters the battlefield" triggers, the potential to play it on an early turn if you have a one-drop, etc), and there is another good red card in the pack (Murasa Pyromancer). You could also put up a fairly strong argument for Timbermaw Larva being the correct pick in the abstract, but I feel that green is generally a weak enough color in Zendikar draft that I would rather take a slightly less powerful card if it is in a stronger color.

So why would I take the Bladetusk Boar over the Kor Skyfisher if I believe that it is a weaker pick in the abstract?

Because I think that red is just that good in Zendikar Limited.

My favorite deck to draft in Zendikar (though it is becoming increasingly difficult to put together) is mono-red. When things go well, my mono-red decks feature a lot of cheap creatures such as Goblin Bushwhackers, Goblin Shortcutters, and, if I'm lucky enough to get any, Plated Geopedes. Add some cards that hit hard, such as Zektar Shrine Expedition, Unstable Footing, Molten Ravager, and Shatterskull Giant, and some Spire Barrages to finish things off.

If it doesn't look like I'm going to be able to put together a mono-red deck, I'm almost as happy to find myself with a fast red-green, blue-red, or red-black deck. And until I feel like other people are properly valuing red, I'm going to keep trying to draft it even if I have to give up a little bit of abstract power to do so.

While I have my pro-red bias (which is very different from a protection from red bias), I think that any of Timbermaw Larva, Kor Skyfisher, Bladetusk Boar, Murasa Pyromancer, Vampire Hexmage, or Verdant Catacombs are defensible picks depending on the circumstances.

If getting the Verdant Catacombs means more to you than slightly improving your chance to win the draft, then take the fetch land. If you think that the people at your table have a particularly strong anti-green bias, then take the Timbermaw Larva. If you have a strong color preference, then grab one of the many comparably powered cards in this pack that matches your preference.

The one defensible pick that I would generally warn against making is Murasa Pyromancer. Yes, it probably has the greatest potential out of any of the cards in the pack, but on average it is a weaker card than the easier to cast and similarly red Bladetusk Boar.

If you are taking the Vampire Hexmage over the Timbermaw Larva because you feel like it requires less of a color commitment, then you have made a wildly wrong assumption. If you are taking the Murasa Pyromancer over the Bladetusk Boar because you think that it is, pound for pound, a better card, then I would venture to say that your underlying assumptions are probably off.


You sit down for your first match and draw this hand: 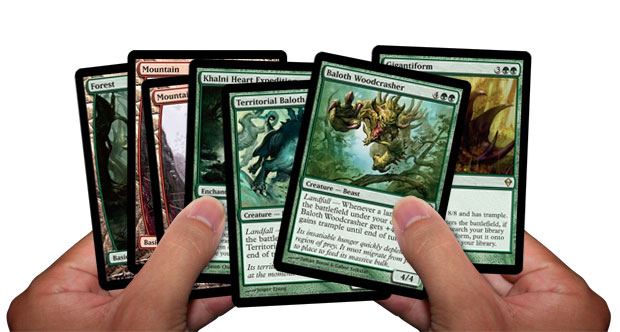 Do you keep this hand on the play? How about on the draw?

Posted in Limited Information on November 10, 2009