ome cards, like Doom Blade, are going to be extremely good for you regardless of what type of a deck you have. You could be a controlling blue-black deck that hopes to win by locking up the ground and killing with evasion creatures, or you could be a hyper-aggressive white-black deck with a ton of one- and two-drops that wins by getting in a bunch of early damage and then swarming your opponent.

And there are cards like Yawning Fissure, which you would never want to play in a two-player format.

But not all cards are clearly "good" or "bad," a lot of cards have wildly varying values depending on what type of a deck you are drafting. Panic Attack is a prime example of a card that goes from virtually unplayable in some decks to extremely relevant in others.

If your deck is chock-full of removal and control elements and hopes to win by having one or two more big threats than your opponent, then Panic Attack isn't going to do much of anything for you. If instead your deck is incredibly aggressive, full of cheap creatures but lacking in removal, then Panic Attack might be exactly the kind of card that you need to seal the deal.

Understanding what kind of a deck you are drafting allows you to make strong, consistent picks that will lead to a much better deck than the kind of deck you would have if you were merely taking the abstractly best card out of every pack.

Archetypes in Magic 2010 aren't as clear-cut as they are in formats such as Shards / Conflux / Reborn, where you know that something like Drumhunter would be an excellent addition to your Naya 5-power deck.

But there are still very important things to consider when you are figuring out what type of a deck you are drafting. If you're drafting a deck with a ton of cheap ground creatures that looks to swarm your opponent and then finish them off with a Panic Attack, or a couple of carefully timed removal spells, then Palace Guard isn't going to do much for your overall plan.

Sure you might want to sideboard the Palace Guard in if you were playing against a similar deck, but it would be actively bad in your main deck as it would only be "good" in games that you were in pretty bad shape in to begin with. If things were going according to plans with your aggressive, non-evasion white deck, then a three-mana 1/4 creature would do very little for you. If things were going badly for you, then a three-mana 1/4 creature would ultimately do very little for you.

(There are exceptions to this, such as if you are closing the games out with Panic Attack or the like, but those are few and far between and you need to be aware of them when they come up.)

If, on the other hand, you're drafting a deck that looks to lock up the ground and win in the air then Palace Guards is going to be pretty good for you.

So how do you know what type of deck you're drafting?

Early on in the draft you can make your picks based on the kind of deck that you want to draft, but as the draft goes on you will have to make your picks with respect to the cards and the types of cards that are already in your stack.

You might really want to draft a control deck that has a lot of high-toughness creatures to block with while it wins with evasion creatures, but if you don't have many good evasion creatures then you're going to have to pursue different angles of attack with your deck. It might turn out that you're actually drafting a black attrition deck that wants to trade a bunch and then win by having one more big threat than your opponent does. If that's how your deck is shaping up, then those high-toughness creatures become a lot less appealing.

You're looking at your 7th pick of Veteran Armorsmith or Silvercoat Lion.

Well, if you didn't have any color concerns, then Veteran Armorsmith would be by far and away the better pick. It has the same converted mana cost, an extra toughness, and a relevant ability.

can be a problem, especially on turn two. If you can't reliably cast your Veteran Armorsmith early, then it stops being special. Instead it becomes a virtual three-drop or four-drop (or worse), at which point you are hardly getting a deal for your 2/3 creature.

If you think that you're only going to be able to play something in the 6-7 Plains range, then Silvercoat Lion might very well be a better addition to your deck, especially if you are short on early drops. In fact at that point it might turn out that the 2/1 Coral Merfolk sticking out of the back of your pack might be a better pick than either the 2/3 or the 2/2 that are staring back at you.

Color requirements become a lot less significant the more expensive a card is. While it might be tough to get

on turn two, it's nowhere near as hard to cobble together two Plains to cast a Serra Angel on turn five.

And even if you don't have

on turn five, that's fine. Your Serra Angel, unlike Veteran Armorsmith, is still going to have a big impact if you cast it on turn seven.

So if it looks like you aren't going to be playing much white in your deck, stay away from the Veteran Armorsmiths! You won't regret the fact that you don't have a two-drop that you won't be able to play until turn four (or worse) a good percentage of the time.

But how early do you take them?

Early in the draft, before you have a clear sense of how heavily into your colors you are, it's worth it to be a bit optimistic about Tendrils of Corruption and Seismic Strike, because even if you don't end up playing much black or red, they are still going to be pretty good.

Consume Spirit, on the other hand, doesn't warrant the same level of optimism that Tendrils of Corruption and Seismic Strike should get.

That's not to say that there aren't spots where you would want to spend an early pick on Consume Spirit (such as if you are trying to force a heavy black deck), but unless you are working hard for it, and/or you are really in the right place for it, those Consume Spirits just aren't going to make themselves good in the way that the less color-intensive (and instant-speed) Tendrils of Corruption and Seismic Strike will.

You're drafting a white-blue deck and you get passed a pack that has Stormfront Pegasus and Snapping Drake. Both of these fliers are quite impressive, more than welcome additions to my deck, that outshine most of the other creatures at their respective mana costs.

I can tell you right now, the answer shouldn't depend on what kind of deck you're trying to draft, but rather on the mana costs of the cards you already have in your pile.

Early on in the draft, I'd probably lean towards the Stormfront Pegasus (it's much easier to get good four-drops than good two-drops) but as the draft goes on, my pick will depend entirely on what my mana curve looks like.

If I have a ton of two- and three-drops, then I'll probably pick up the Snapping Drake. If I have a lot of four- or higher drops, then I'm going to take the Stormfront Pegasus.

Let's say you have a ton of three drops and a decent number of five-plus drops in your deck, but not many spells that cost two or four when you're presented with the choice between Stormfront Pegasus and Snapping Drake.

You have big holes in the two slot and the four slot, so either would appear to be welcome additions to your curve, making this a seemingly difficult decision. In reality, this is actually a quite straightforward pick. The thing is, your three-drops are perfectly acceptable substitutes for four drops, but they do not do nearly the same thing that two-drops do. 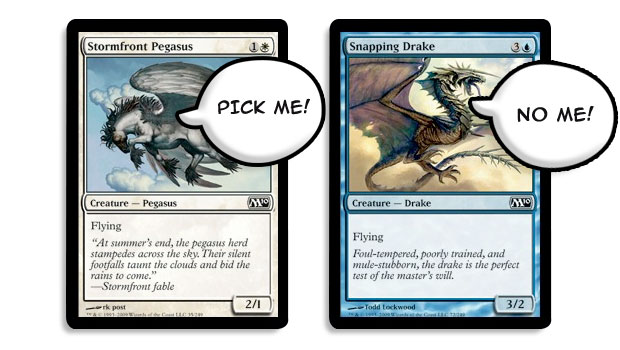 If you don't have enough early cards, you could easily find yourself doing things like Consume Spiriting two- and three-drops, and spending Assassinates on Veteran Armorsmith. And while these plays aren't bad things to do in the slightest sense, if you can construct your deck in such a way that you can play to the point where you get a lot of value out of your removal spells, then you're probably going to find yourself doing a lot of winning.

Drafting with a Sense of Urgency (Or Preventing One)

If you're getting near the second half of pack 2 and your deck is sorely lacking early drops, then it can become very important for you to pick up a Coral Merfolk or a Runeclaw Bear to make sure that your deck has at least some early plays.

If you're in the third pack and your deck has a splashed Lightning Bolt in it and no fixers, then you might need to pick up that Terramorphic Expanse earlier than you would otherwise want to.

Once you get near the end of the draft you will often be forced to make picks out of necessity—picks where you take a noticeably "weaker" card in order to make sure that your deck functions as it's supposed to. And that's perfectly OK.

If your draft goes very well, then you probably won't have to make any quality sacrifices towards the end of the draft.

Keep in mind that in a multiple-set draft format, such as Shards / Conflux / Reborn, you could draft in anticipation of what is in the last pack. For example, you might want to make sure that you have a lot of mana fixers before you open your Alara Reborn pack because the spells in it are so good). But you can't do that in a single-set draft format such as Magic 2010.

There are no specific strengths in each pack, though if you feel out your draft, you could very well sense trends and predict what types of cards you are more likely to get as the draft goes on.

Knowing that the projected contents won't change from pack to pack in an M10 draft, you can attempt to properly balance out your draft and thus avoid being forced into a situation where you will have to draft with a sense of urgency. If you keep an eye on your mana curve, your color commitments, and what your deck is actually trying to do, then you are going to find yourself with a lot of powerful, coherent decks.