When to Make a Splash

Posted in Limited Information on March 24, 2009

It is very important for your Draft or Sealed Deck to be able to play smoothly. If you're frequently stuck with a hand full of uncastable spells, you probably aren't going to be racking up too many wins.

So how do you know when it's worth it to dip in for those extra colors?

The Cost of Playing Two(ish) Colors

If you're drafting a two-color deck, you get the advantage of being able to cast your spells without any real work on your own part. If you're playing 10 Plains and 7 Islands, you aren't going to have too much trouble slapping down a Vedalken Outlander or a Sigiled Paladin on turn two.

Generally, two(ish)-color decks should be fast in order to both take advantage of their ability to cast their spells in a timely manner and to make up for their relatively lower overall power level.

When you're playing a two-color deck, you can and often will win with a collection of spells that most people would scoff at. Just the other day I had a powerful five-color deck that lost to a deck featuring multiple Hellspark Elementals, Rip-Clan Crashers, Maniacal Rages and Hissing Iguanars. I never had a chance.

I would spend my second (and sometimes third) turn setting up my mana while my opponent would be busy cracking me in the skull. I was lucky enough to steal a game with Wall of Reverence + Fusion Elemental (which was so sweet, by the way). But without my opponent getting a miserably clunky draw or me having something like Wall of Reverence or Rhox War Monk to allow me to steal back time, there was almost no way that I could win.

When things work out well and you're getting passed all the cards that you need for your two-color deck to work, then you're going to be in beautiful shape. Your deck will be fast, it'll be full of good cards, and it will rarely lose to itself. But, if you don't get the cards you need during the draft, then you're going to have good mana, but you're also going to be playing 2 Jhessian Lookouts and a couple of off-colored cyclers.

Whatever picks you "saved" by not having to take manafixers early, you lost when you had to pass a card that left you muttering under your breath, "I can't believe that was still in the pack. I wish I were in that color."

The Cost of Playing Many Colors

When you're drafting a many-colored deck, you are going to have access to the majority of the powerful cards that get passed to you, but you have to spend a good number of early picks on mana fixing. The theory is that you will more than make up for the picks that you had to spend on mana fixing by vastly increasing the quality of your other picks.

When this works out, it's great. Sure, you had to take that Seaside Citadel second, that Jungle Shrine third, and those first- and second-pick Armillary Spheres, but in exchange for that, you get to play the Grixis Charm you got sixth, that Rafiq of the Many you got fourth, and that Fusion Elemental you got ninth. 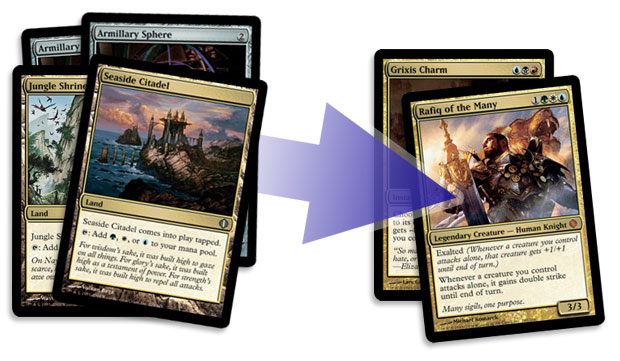 But sometimes things don't work out like you might have hoped. One of the nightmare situations that can occur when you are drafting a many-colored deck is that you don't get the mana fixing you need in order to be able to cast your spells in a timely manner (or at all, as the case may be). When this happens, you're going to have an incredibly awkward deck that can compete, but only if it draws the right pieces.

Even if you get the fixing you need, you still have to be concerned with your mana curve so you're not getting blown out left and right before you even get a chance to cast your most powerful spells.

Generally, the happy medium lies somewhere between two and five colors. Two and a light splash or one heavy base color and two supporting colors are pretty failsafe ways to draft a good deck. But when the situation calls for it, you shouldn't be afraid to go for a hyper-aggressive two-color deck, or an absurdly powerful five-color deck.

(Not) Splashing Cards that Smooth your Draws

Let's say that you are splashing. It could be a third color or a fifth color. A splash is a splash. In fact, a lot of the time your splashes for your fifth color are easier to cast (because you have so much mana fixing) than if you're splashing a third color (off of just a couple of sources). The fact that you have relatively few sources of the color that you're splashing means that some cards are going to drop considerably in value compared to times when they're in one of your base colors.

Some cards, like Agony Warp, are going to be very good pretty much whenever you can cast them. Sure, you'd like to have the option of casting them early, but if you have to wait that's fine too.

It's barely noticeable that cards like Sphinx Sovereign or Bull Cerodon are splashes because you aren't going to be casting them until late in the game even if they are in your main colors. But some cards get significantly worse if you can't reliably cast them early.

If you can reliably cast Knotvine Mystic early because of Panoramas, Jungle Shrines, and/or landcyclers, then go ahead and snag it with one of your first few picks. It's an absurdly powerful card early on, and it remains relevant later in the game. But if you are going to have a lot of trouble cobbling together

early on, then Knotvine Mystic isn't going to do a whole lot for you.

Sure, it'll be fine on turn five, and sometimes you'll still need it to help you power out a Jungle Weaver or somesuch, but if you can't reliably cast it early then Knotvine Mystic simply isn't worth an early pick and might not even be worth including in your deck.

This is the same reason why you don't want to splash mana fixing. Sure, you would always love some more ways to make your mana work in your five-color deck, but if your mana fixing is in a splash color then it probably won't be fixing too much.

The exception to this is powerful land cycling cards like Fiery Fall, Absorb Vis, and possibly Gleam of Resistance. If you already have your mana, then you have a pretty good (and pretty expensive) spell. If by chance you're drawn your splash color and your splashed land cycler while missing a key color of mana, then you're in luck. A splashed landcycler is never going to be close to as good as an on-color landcycler, but that doesn't mean that it still can't be a valued to your deck.

The exceptions to this are Traumatic Visions and Sylvan Bounty whose real strength is in their land cycling. Their castable side gives the card enough late game utility for you to justify spending a reasonably early pick on it if it's in one of your base colors. If you can't reliably cycle a Traumatic Visions or a Sylvan Bounty on turn two, then you shouldn't be spending too much time even looking at it.

If a card is designed to help smooth out your draws, and you can only cast it if your draw is already smooth (or in an odd corner case), then it really isn't going to do much for you.

The Problem with Splashing Early Drops

Let's say you're playing a deck that has a ton of fixers, but only a couple of Plains. In that case, your Akrasan Squire will be more like a Sighted-Caste Sorcerer than anything else.

That's not to say that your Akrasan Squire won't be playable; it still will be. Barely. But it would be a bit unfortunate that your five-color deck can't offer up anything better than an Akrasan Squire that it will rarely be able to cast before turns two or three.

But you still need to give yourself a reasonable chance of hitting your curve. So even if it's very unlikely that you will be able to cast your Goblin Deathraiders on turn two, you might need to play it because it's still fine as a three-drop.

Early drops are generally only good because you can cast them early. When that option is taken off the table, you're looking at a very different card that you need to evaluate as such.

Sometimes you get backed into a corner and you need to scrape to find that last playable card.

If you're given the choice between playing something like a splashed Steward of Valeron that will be really good if you can cast it in a timely manner, but pretty mediocre otherwise, or something painfully unimpressive such as a Darklit Gargoyle in a deck that doesn't have any black sources, then you should go with the potentially powerful Steward of Valeron.

In this situation, the Steward of Valeron is a conditional card in the same way that a Naturalize or a Dispeller's Capsule is. It'll usually be mediocre, but there will be times when it will be exceptional, and that makes it strictly superior to a card that is mediocre across the board.

You're doing an 8-4 draft on Magic Online and you open up a pack that contains:

You take the Resounding Thunder.

Posted in Limited Information on March 24, 2009