Posted in Limited Information on June 1, 2010

our first pick of the draft is often the most important pick that you will make. When you make that first pick, you aren't tied down by anything other than your own biases.

Cards like Umezawa's Jitte and Masticore are the definitions of ideal first picks. They are insanely powerful bombs that threaten to immediately take over any game that they are a part of, they are cheap to cast, and they require no color commitment. But cards like Umezawa's Jitte and Masticore only come around once every few years. And even then, they're extremely hard to get your hands on. Usually your first pick will offer you some very good things, but not without a cost. 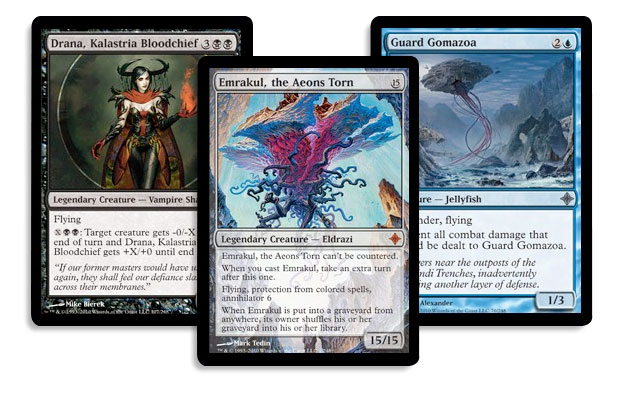 Sometimes your first pick will be an easy choice to make. You might see an Enclave Cryptologist or a Corpsehatch in a pack where the next best card is a Guard Duty. But often times you will have to choose between at least two or three different viable candidates.

So how do you measure the pros and cons that potential first picks might offer so that you can make the first pick that's right for you?

Just because a card is very powerful if you can cast it, or if you have the right cards to go with it, does not mean that you want to spend one of your first few picks on it. 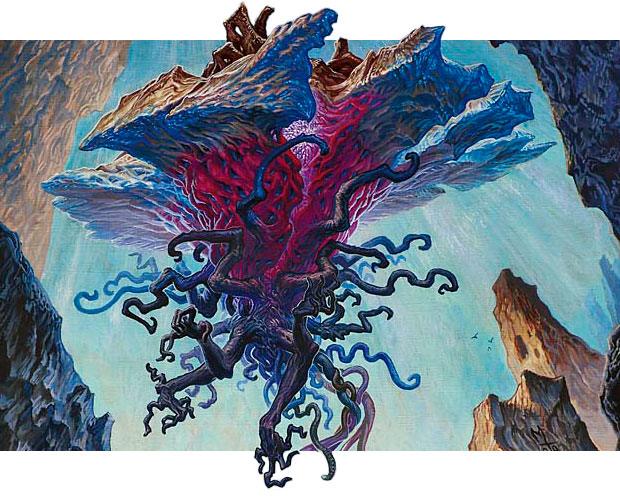 While Emrakul, the Aeons Torn might be the biggest card in the set, it is by no means the best. If you get to fifteen mana, you will almost assuredly win the game when you cast it, but getting to fifteen mana is a pretty tall order to fill. If you use your first pick to take an Emrakul, the Aeons Torn, you might have just acquired a card that has a lot of trade potential, but unless you have a bunch of Overgrown Battlements, it probably won't do much for your deck.

Unless you really want that Emrakul, the Aeons Torn for your collection, you should not spend an early pick on it.

While Emrakul, the Aeons Torn requires an extremely specific set of circumstances to take over a game, Khalni Hydra merely requires you to be nearly mono-green. While an 8/8 trampler that you can cast on turn five is a great boon for a mono-green deck, you probably don't want to use your first pick of the draft on a card that will limit you to exclusively taking cards from one of the weakest colors in the set. Yes, if you end up with an aggressive mono-green deck with a perfect curve, you will have about the best card that you could hope for in the form of Khalni Hydra, but that's a big if. Unless you really want to be mono-green, you would be better off taking a solid, if unexciting card, like a Caravan Escort, or a Last Kiss, over the color-constricting Hydra.

While nowhere near as difficult to cast as the fifteen-mana king (or queen?) of the Eldrazi, or the extremely Forest-intensive Khalni Hydra, Pestilence Demon is another card that has a lot of ifs attached to it. If you get to eight mana, and if that includes three black mana, you will get an awesome card. But if you aren't playing heavy black, you won't even get to run your Pestilence Demon. And even if you are playing heavy black, the game might not go long enough for the mammoth-sized, board-sweeping flyer to make an appearance.

While I would be happy first-picking a Pestilence Demon, there is certainly no shame in passing one if there is a card in the pack that you feel would act as a better foundation for that brand new deck that you are building.

While cards that are conditionally very powerful might not be worth your first pick, unconditional bombs are a pretty ideal way to get your draft started. A card like Eldrazi Conscription, while expensive, is well worth a first pick because of its ability to instantly win any game that it resolves in. The fact that it doesn't commit you to any colors is gravy.

While Guul Draz Assassin and Eldrazi Conscription require little to no color commitments, most bombs do require you to commit somewhat heavily to a color. Sure, Conquering Manticore has two red mana symbols in its mana cost, but it is so powerful that it is worth the commitment. Yes, your draft might end up going in a wildly different direction from where it started, forcing you to abandon your

flier, but Conquering Manticore is good enough that it is both worth the risk that you might have to abandon it later, and even worth fighting over red for.

Venerated Teacher is not a great card on its own, but when it is surrounded by a bunch of level up creatures, it becomes pretty fantastic. If you decide to first-pick a Venerated Teacher, you are making a strong statement that you want to draft a level up deck. 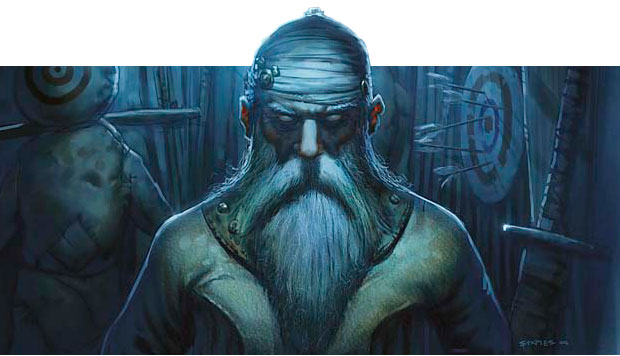 So while it is definitely not right for everyone to first-pick a Venerated Teacher over a Pestilence Demon, if you really want to draft a level up deck, and you aren't particularly interested in drafting a black deck, there are few better first picks that you can make. If you took the Pestilence Demon first, you would either feel like you were committed to drafting black, and then go ahead and draft a bunch of black cards, or you would look for every possible opportunity to abandon that Pestilence Demon while you continue trying to draft a level up deck.

If you think that you would feel comfortable drafting a black deck, and you would be willing to try to defend that Pestilence Demon, then you should probably take the eight-mana flyer. But if you think that you can maximize your chances of winning by putting your foot on the level up pedal and not letting up unless you absolutely have to, then you should take the Venerated Teacher.

Additionally, passing the abstractly far more powerful Pestilence Demon will likely put the player to your left into heavy black, greatly improving your chances of getting passed top-notch blue and white level up cards in pack 2. 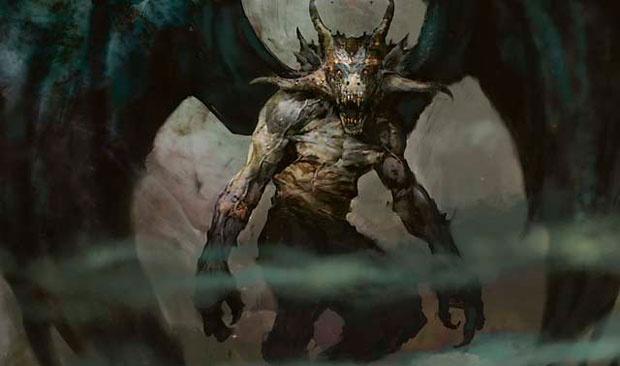 If you just want to take the abstractly most powerful card and draft your deck as it comes, then you should pass the Venerated Teacher to instead take whatever the individually most powerful card in the pack is. But if you want to press the issue and try your hardest to put together an awesome level up deck, then you should take the Venerated Teacher.

Versatile removal spells are amongst the best first picks that you can make regardless of the format. Your deck will always benefit from their inclusion as they give you answers to your opponent's top cards and give you opportunities to catch up when you're behind, and press your advantage when you are ahead.

Taking a cheap, high quality removal spell like Flame Slash, Vendetta, Staggershock, or Narcolepsy is always a great way to get your draft started. If you take that Flame Slash and then end up going black-red, then you have an awesome undercosted removal spell that you can use to get rid of some of your opponent's earliest attackers or most menacing threats while still leaving you with enough mana left over to cast an additional spell(s). If your deck ends up blue-black, you could still very easily splash your Flame Slash to give yourself an extra way to deal with some of your opponent's top threats.

While a first pick Flame Slash or Staggershock will certainly leave you with a lot of room to maneuver, a Corpsehatch is similarly well worth a first pick because of its ability to deal with nearly anything while simultaneously accelerating you to your biggest threats. Otherwise difficult-to-cast cards like Pestilence Demon, or Ulamog's Crusher can come down on turn six with the aid of a Corpsehatch.

The Color You Want

If you really want to draft black, you might be willing to take a good, but not great, card like a Cadaver Imp over a number of more impressive cards, like Oust in colors that are less desirable to you. And that's a completely legitimate decision to make.

If you are willing to go to lengths to draft black, then there's no better place to start drafting black than with your first pick. No, you shouldn't let your desire to draft black lead you to take a Cadaver Imp, or even an Induce Despair over a bomb such as a Conquering Manticore, but there's no reason why you shouldn't be willing to pass a good (but not great) nonblack card in order to take a black card with your first pick.

Skywatcher Adept is an awesome card. It's not a bomb, it's not a removal spell, and it's not an enabler, but it's a very good way to get your draft started. It's an extremely solid card that fits in very well in any deck that can cast it. But sometimes your first pack doesn't offer you anything that exciting. Sometimes you have to first-pick a Bloodrite Invoker, or a Nest Invader, because there's simply nothing "first pickable" in the pack.

When this happens to you, you shouldn't feel bad about it because it happens to everyone. Simply think of this as an opportunity to start your draft off with some additional flexibility. It is, after all, a lot easier to abandon a Nest Invader than a Kazandu Tuskcaller if you are getting signals that you should go red-black.

Staying on the Right Track

It's very important to know how to start your draft off right. If you misuse your first few picks then you will likely find yourself playing catch up for the rest of the draft. Sometimes getting your draft started off right means walking away from your first pick.

Sure it's painful to say goodbye to that premium card that you started your draft with, but if you marry yourself to your first pick you will blind yourself to a lot of good opportunities. If you start your draft off with a red card, be it a Flame Slash or a Conquering Manticore, and the person to your right passes you an endless stream of good blue and black cards, that there is a pretty good chance that you will have to say goodbye to your first pick.

Posted in Limited Information on June 1, 2010