Win by the Skin of Your Wing

raditionally, one of the biggest problems with Equipment is the fact that it really sucks when you don't have a creature to put it on. 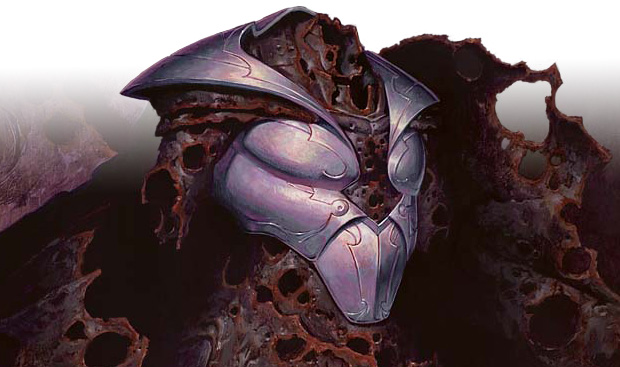 But wait, there's more! You might not believe it, but it can get even worse than that!

Sometimes your opponent won't even have to give up a full turn to cast that Disperse or that Galvanic Blast to pick off your creature that you spent so much mana to try to equip—and will simply use his or her excess mana that would have gone to waste otherwise to seriously derail your plans.

If you trade three turns worth of action for a single card and a fraction of a turn early or midway through the game, you're going to have a really hard time catching up again. That means that you don't want to cast and use most pieces of Equipment until very late in the game—and at that point, your Equipment better be pretty darn good.

Cheap pieces of Equipment such as Sylvok Lifestaff and Accorder's Shield are quite appealing because they don't require much of a time investment—but still have a noticeable impact on the game.

While Sylvok Lifestaff is quite good, Argentum Armor is not a particularly good card.

Well, if it's a powerful card, why isn't Argentum Armor a good card in Limited?

An Alpha Tyrranax costs the same price to cast and gives you a huge leg up on the game the second it hits the board. There are only a couple of cards in the format that can kill a green 6/5 without some serious outside help. And if your opponent does spend a couple of cards, and (in many cases) a couple of turns to kill your Alpha Tyrranax, that will still be a very worthwhile exchange.

Strata Scythe is a good piece of Equipment because it has a huge impact on the game, and it's cheap enough that you can reliably cast and activate on the same turn (hopefully when your opponent is tapped out) so you are likely to get at least one good attack in with it even if your opponent has an answer. So if you're going to play a normal piece of Equipment, it better be cheap—or it better be really good and affordable enough that you won't automatically lose if your opponent has a single removal or bounce spell.

With living weapon, no longer do you have to worry about drawing a piece of Equipment and not having a creature to attach it to.

When you play a living weapon, you impact the board immediately. Instead of spending multiple turns to (maybe) make a difference with your Equipment—you immediately get a creature that will be able to affect the board. 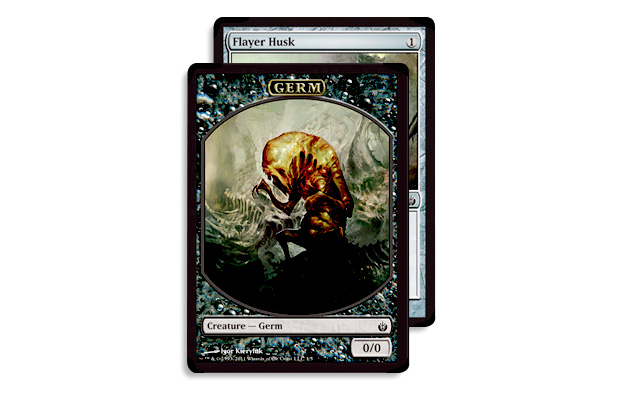 Even if you just use your 0/0 germ token to chump block once, and then reequip your living weapon to something beefier, you will still save a significant amount of life.

And if your opponent has to trade a physical card, be it a creature or a removal spell, with your 0/0 germ—that's a pretty huge win for you.

Bonehoard (previewed yesterday) is a first-pick quality card if I've ever seen one and Flayer Husk (from the Visual Spoiler) is sure to be a valuable role-player in Equipment decks and metalcraft decks the world over.

While Argentum Armor would allow you to win those same stalemated games that Skinwing would help you win (where your opponent doesn't have any answers) in a more dramatic fashion, the Armor would rot in your hand in many games where Skinwing would slip onto the battlefield and help you towards a very close victory.

Now Argentum Armor is a scary card because it's so tough to beat once it gets going. If you have an active Argentum Armor, your opponent is going to be creatureless within a few turns while you will have (at the very least) an 8/8 creature that Vindicates every time it attacks.

An Exsanguinate for 10+ will be enough to win most games, yet Exsanguinate will frequently rot away in peoples' sideboards. 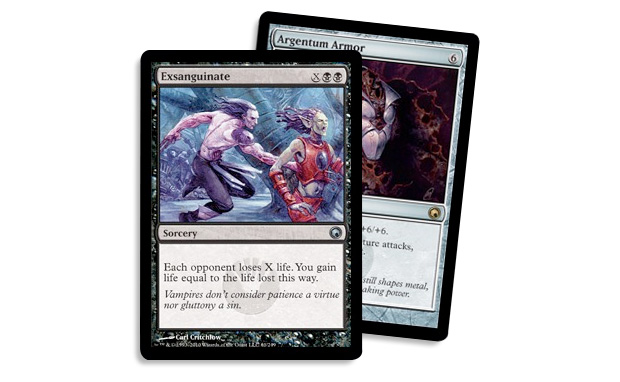 Exsanguinate, like Argentum Armor, is a finisher. That said, Exsanguinate actually has quite a few more uses than Argentum Armor—it can be used midway through the game to help buy you some much needed time while taking a nice chunk out of your opponent's life total. Later on, it won't matter if your opponent has a Shatter, a Disperse or a Crush—as only countermagic will be able to stop it.

If I were looking for a finisher, I would prefer to have an Exsanguinate rather than an Argentum Armor.

Sure I'll still play Argentum Armor sometimes, and I will board it in for particularly slow match-ups, but it isn't the kind of card that I'm going to jump through any hoops to play.

Meanwhile, Skinwing brings a lot to the table. It is a pretty good finisher, and it won't sit around in your hand fouling things up with that dead fish smell that unused cards tend to develop. 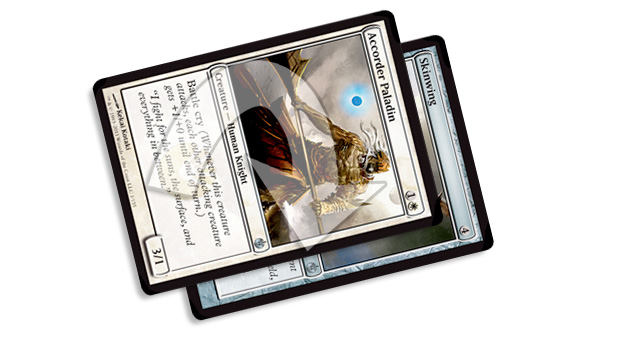 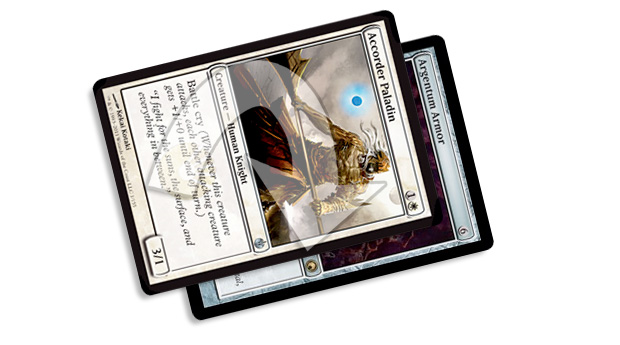 ... are the kinds of things that you would expect anyone who doesn't have a good answer to say.

The fact is that an active Skinwing is more than enough to win most stalemated games. And given that you don't have to blow your opponents out—you just have to win, you can see why a card like Skinwing would be vastly preferable to the incredibly mana intensive Argentum Armor.

Helping you get there

Normal finishers, like Argentum Armor or Exsanguinate don't do anything to help get you to the late game.

Even a card such as Blaze or Fireball, which can be very helpful in getting you to the late game if you use it to kill one of your opponent's creatures—won't end up doing anything for you late if you had to use it early.

Unlike the aforementioned finishers, Skinwing both helps you through the middle of the game by providing you with a 2/2 flyer, and acts as a rock solid finisher.

I hope you get a chance to make it out to a Mirrodin Besieged Prerelease this weekend!

I'll be taking on all challengers this Saturday at the StarCityGames.com prerelease in Richmond Virginia.

The event is being held at the:

If you're near Richmond, you should stop by, say hi and challenge me to a game!